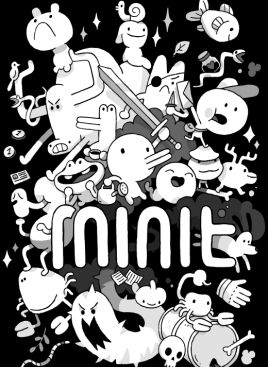 As we’ve previously discussed, it can truly be a challenge to come up with a unique idea among the indie game crowd. It almost feels like we’ve run through every possible idea for retro platformers, roguelikes, strategy games, graphic adventures, etc. Sometimes, however, the best way to stand out is to take existing concepts and push them to extremes, creating something unique again in the process. So that’s where Devolver Digital comes in with a collaboration between developers Kitty Calis, Jan Willem Nijman, Jukio Kallio and Dominik Johann, all presenting their new game, Minit. The end result is something that can best be described as a cross between classic Zelda, Majora’s Mask and a splash of Downwell for good measure, and it winds up being one of this year’s most unique and fun adventures so far.

The story behind Minit is that you are a nameless duck-like hero, cursed to restart each day over and over again. Armed with a sword and whatever items you can find, they set out to every get rid of the curse plaguing the land, having to find ways to work around their time limit and carrying back whatever permanent items and knowledge they gain each time. The twist is that instead of three days or so, you only have — as the title implies — sixty seconds before your character dies and the day ends, waking up back in their home to start over and zip through each area as quickly as possible to get back on track.

It’s an incredibly unique and clever spin on the “time loop” concept, to the say the least. So clever, in fact, that I feel like the usual review format doesn’t do it justice. So, in the spirit of Minit, I have decided to write my review for it one minute at a time, typing down whatever thoughts pop into my head before the time is up and I begin a new paragraph (yes, logically I should begin the whole review over each time to truly do it justice, but my insanity does have limits). So, without further ado, let us step into the shoes of our protagonist and try this out… 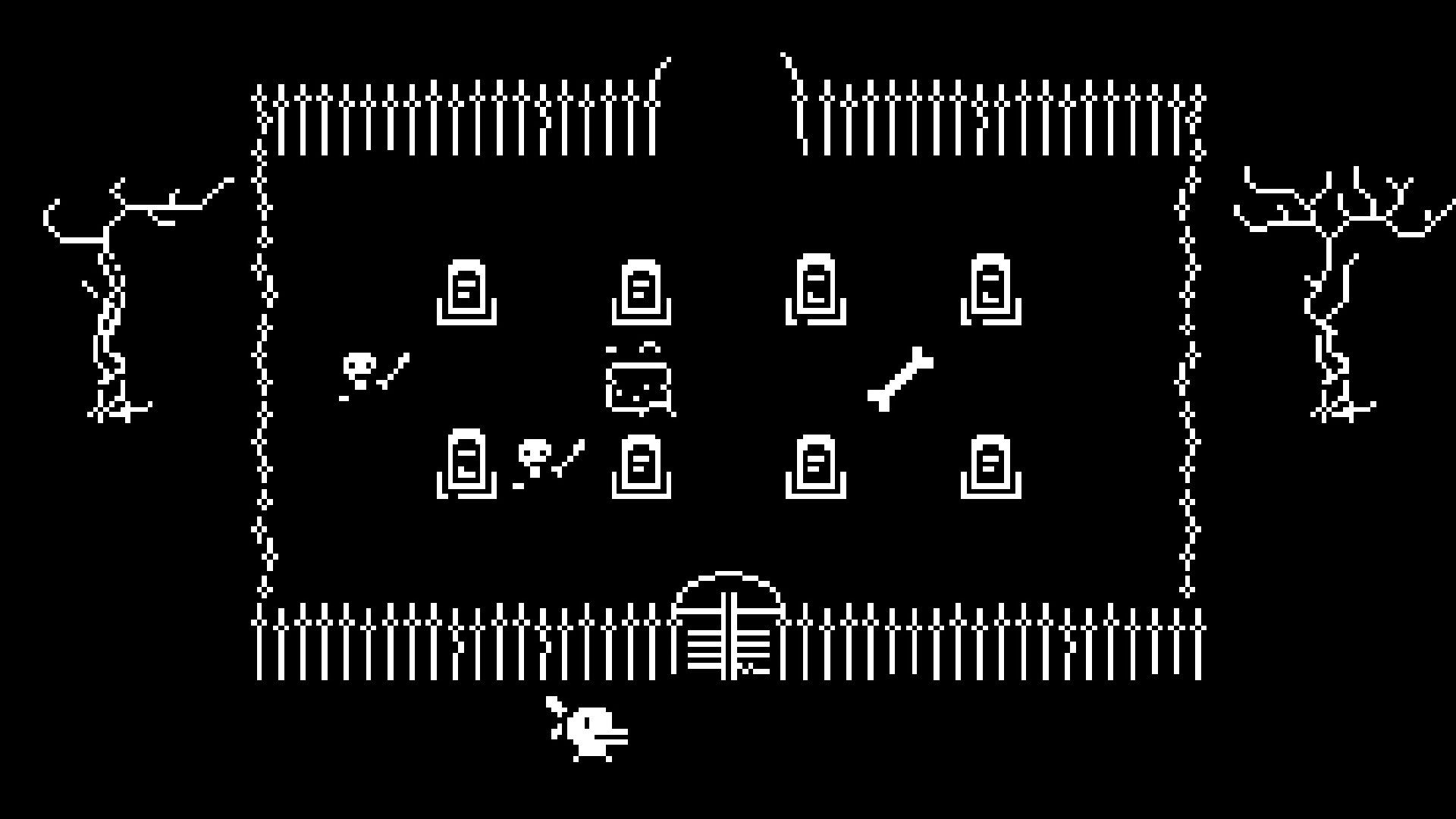 The first thing that jumps out is the black and while pixel artwork, which sounds limiting but actually looks quite stunning, managing to provide a lot of detail for the game’s world with so little, crafting unique character designs-*DING*

The 8-bit characters are simple yet fun, and provide a great source of humor (the elderly turtle-like creature that speaks slowly is an expected yet fun joke), but aside from that, each area of the world manages to remain distinct, clearly having-*DING*

You’ll encounter the likes of haunted houses, tourist traps, deserts, and factories, each with their own unique feels and challenges. Thankfully, you can gain access to a series of teleporters that transport you across them, which is a major key to getting around quickly that-*DING*

So you have to make use of key destinations to get through everything, including four homes that you can select by entering them to respawn in each time. So you wisely have to get into a home and then spend time analyzing the area in order to figure out where exactly to go next and what to solve-*DING*

All of this means that you’ll spend a lot of time wandering around each playthrough, looking for the next potential key to progress, or for shortcuts or paths to somewhere new. And trust me, things get challenging quickly. This game seems to pride itself-*DING*

A large group of particularly challenging puzzles stands in your path. It may start out as something simple like fetching an item for someone who needs it, but the time constraints are the key here, meaning you not only have to know how to get the item in the first place, but also remember how to-*DING* 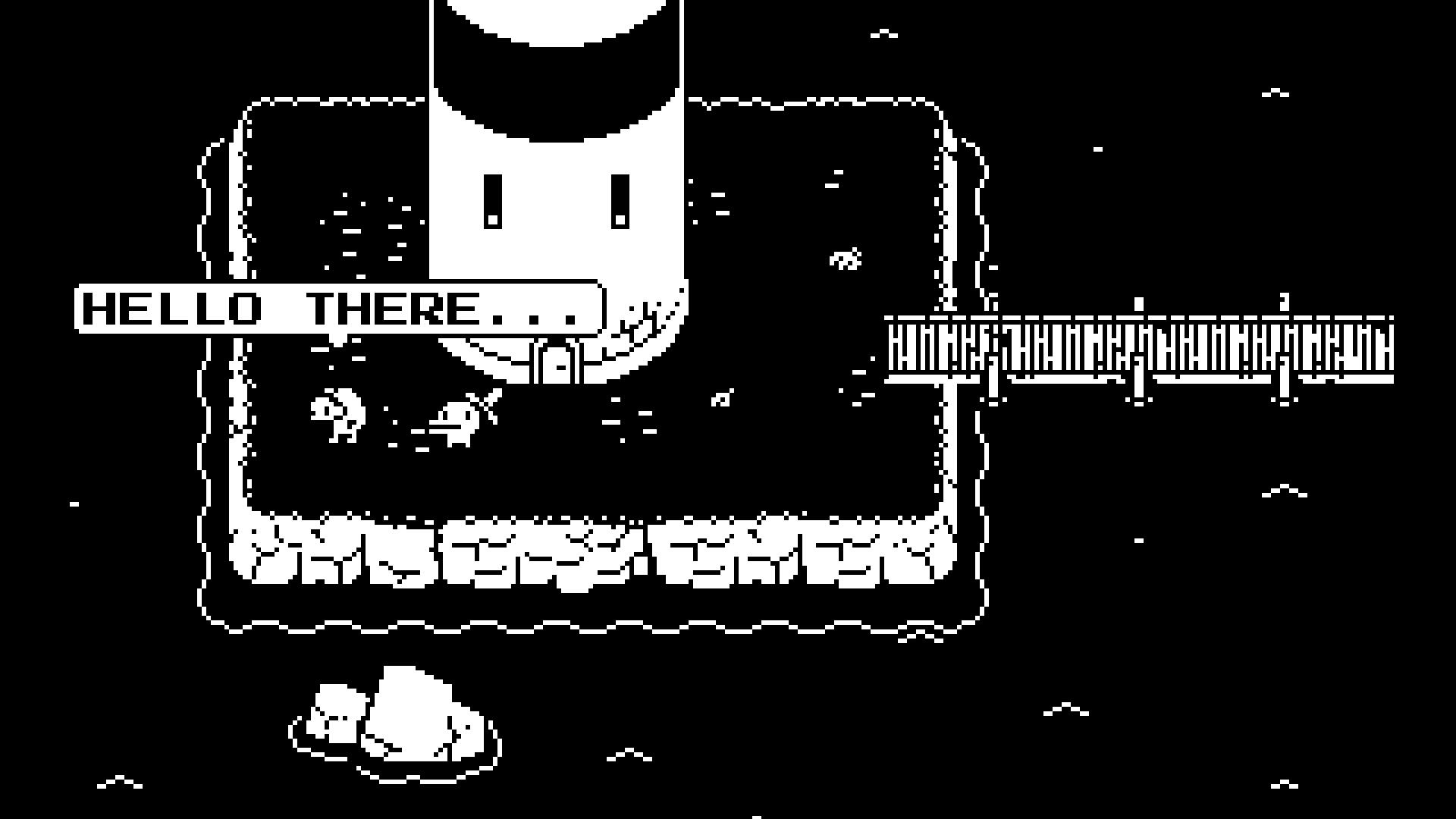 Getting to the goal of each puzzle in time is the tricky part. Each one in Minit is expertly designed to take perfect advantage of the premise, even throwing in a few standard hidden areas and secrets for good measure. Mind you, some of them are head-scratchers, and the hints you-*DING*

Some of the hints you can unlock do get a bit obtuse, though. Actually, there are several moments where you can even solve a puzzle, only to learn that it wasn’t necessary to advance. You can also earn additional hearts and special items through these such as sneakers that let you-*DING*

Items like sneakers let you run faster and hearts increase health, but it’s the ones like flippers that let you swim through water and a glove that lets you throw your sword which are essential for the plot. If this sounds a bit familiar, that’s because Minit is obviously still-*DING*

It takes inspiration from NES Zelda, as mentioned, and as such has some simple yet fun gameplay, with solid controls (well, except for holding down the left thumbstick to run, that mechanic really needs to die, in my opinion). And much like its idol, Minit–*DING*

Minit also features an extremely catchy soundtrack with chiptune-esque tracks that can easily stay with you for a while. Unlike Zelda, it doesn’t have any particularly intense combat, save for a couple of spots, including a highlight-*DING*

Without trying to give anything away, the end leads to a boss battle with a design that would do the likes of Undertale proud. In fact, there definitely seems to be a deeper layer below Minit when it comes to its story. The developers could have easily just made something simple, since the concept-*DING* 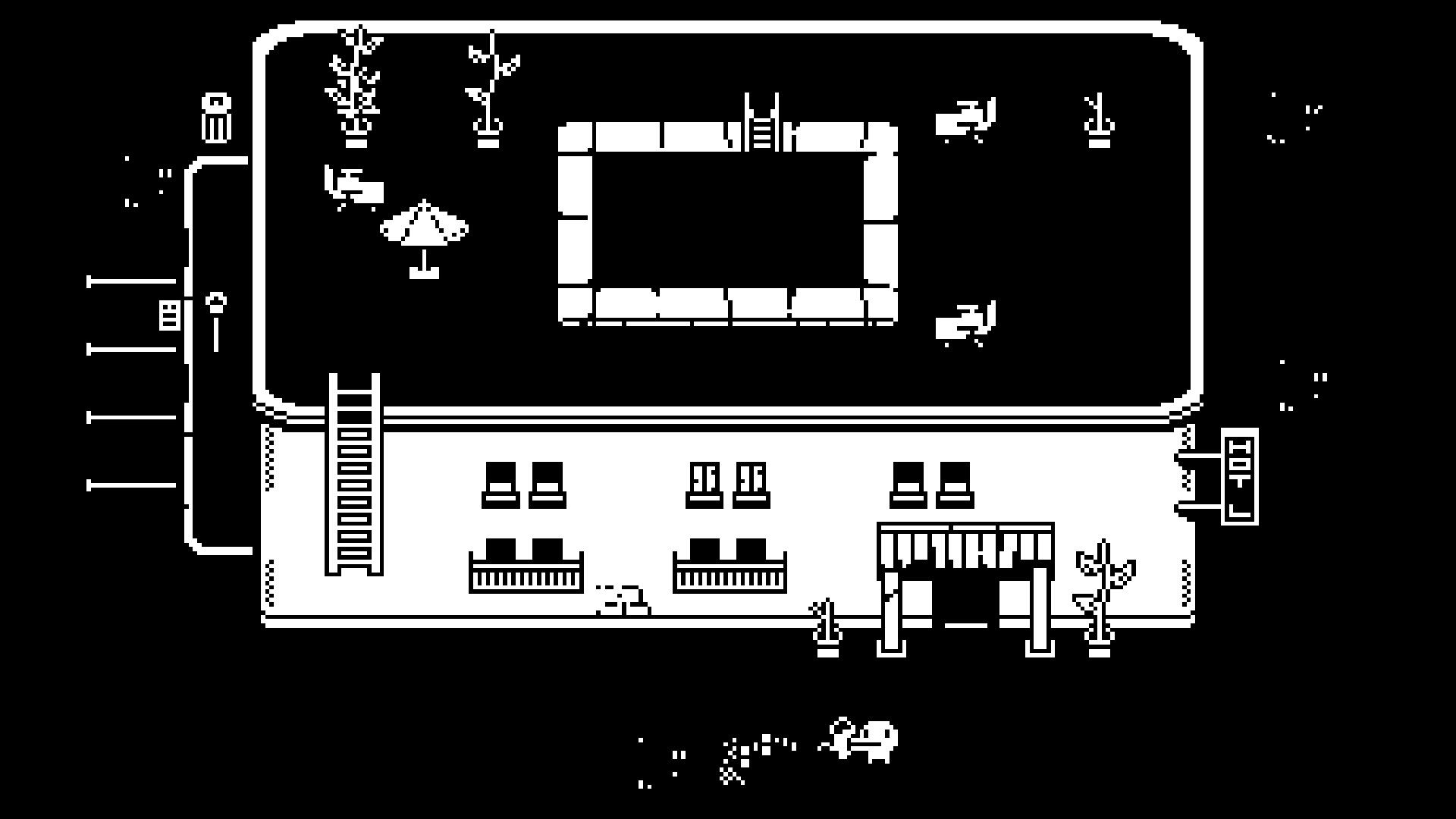 The concept alone was probably enough to carry things, but the devs did not half-ass it when it came to building the game’s world. So even though a lot of it does feels quirky and random at times, it actually builds up to something notably larger by the end, presenting a-*DING*

What we have is a surprisingly detailed story that merges with the simple yet effective top-down gameplay and a unique hook to create something truly special. It’s one of those games where every part comes together to craft an amazing whole, one that you definitely won’t-*DING*

You won’t be forgetting it anytime soon. Are there any notable flaws, though? Well, it is short, only about two hours long, but one could argue that’s pretty much a given for a game that you only play one minute at a time. It does say a lot, though, that even after having-*DING*

After beating the game once, I still had only completed about just over sixty percent of it, which should tell you that there is actually a ton to discover in Minit, between hidden hearts, coins, and more. That said, as mentioned earlier, a lot of these puzzles are optional, and can be a tad-*DING*

Some puzzles can be distracting when trying to complete the game. I spent about twenty minutes on a bizarre puzzle involving growing trees in a dungeon, before giving up and then discovering I never needed to complete that part anyway for the main quest-*DING*

So it can definitely be frustrating to spend any time on a puzzle that isn’t needed. And…well, that’s about it…still half a minute to go with this paragraph…wasting time…Minit is damn good, by the way, in case I haven’t made that clear. Ironic, I only needed a minute to-*DING* 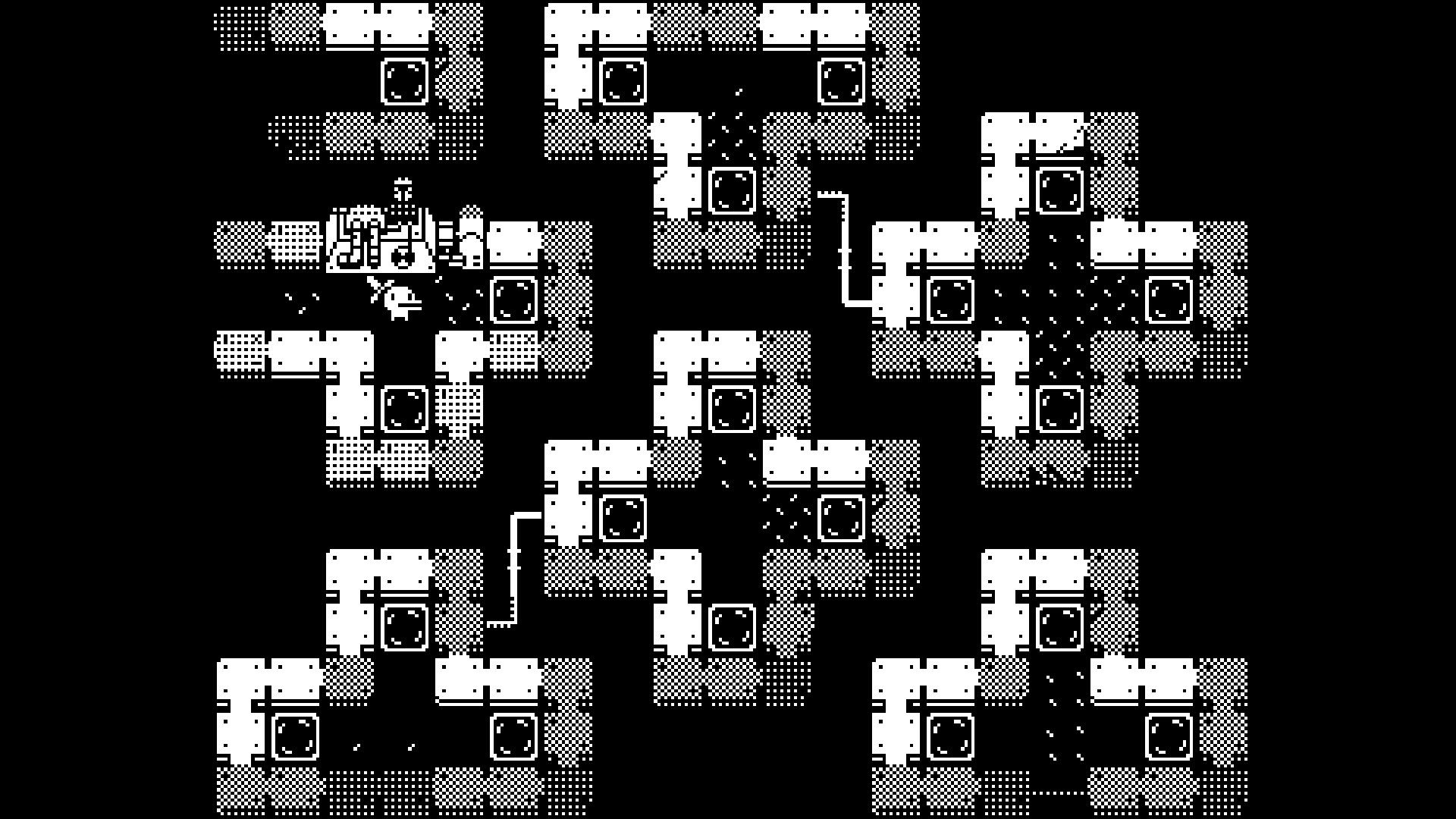 In all seriousness (and switching back to regular review mode for the conclusion), Minit is a truly creative gem, putting an inspired twist on the classic top-down adventures of our youth in order to craft something truly special. Not only does it looks and sound amazing, it also has a cute sense of humor, great gameplay, a perfect level of challenge, and it contains a whole lot to see and solve, even after you initially wrap things up. It may take you mere minutes to play a session, but the overall experience is something that will leave an impact for a long time to come.