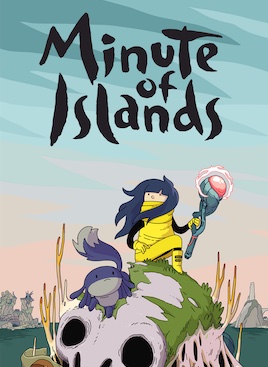 Back in February, I spoke of how eye-catching Studio Fizbin’s Minute of Islands was in its opening section. As strong a first impression one could get, providing you were willing to cast aside the simplistic and straight-forward gameplay. Which, in one sense, has come to define both one’s expectations as much one’s concerns on what this game could (and all likelihood, should) turn out to be. Not to discredit any of the developer’s modest intentions here, even if the preliminary warning — indicating that what one is about to play through covers less-than-pleasant subject matter — feels unnecessary and a tad misleading. Intending to paint the subject matter as harder-hitting than its brief four-to-five hour run-time ends up manifesting as. What kind of subject matter, though? The game, for long stretches, remains vague on that detail. Not that subtlety is inherently bad. Providing you have the visual accompaniment and a way with presentation to make the trek — involuntarily forced to a crawl or otherwise for thematic purposes — worthwhile.

There’s always room for more of these types of games though, despite any and all dysphemisms that might get flung their way. But in the wake of games like Forgotton Anne and GRIS (and let’s face it, a game like Sayonara Wild Hearts can slot under such a descriptor on the basis of its own themes and message) needless to say the bar — not least for a very specific and targeted type of story-led game Minute of Islands is aiming to slot amidst — has been raised immensely in recent year. The result, however, isn’t so clear-cut and in the end, not so absolute to be regarded as either a solid recommendation or an easy dismissal alike. Minute of Islands neither meets that high bar, nor does it fall spectacularly low of such a standard to be considered note-worthy or deserving of vast ridicule. Positive an attribute you might think “well, it isn’t bad” might seem, the reality that Minute of Islands is rather sub-par in that regard, makes it seem less so in retrospect. But as noted, the early, introductory sections do spark both intrigue and an invitingly-unsettling aesthetic that could lead to a curious discovery. Even if that intrigue doesn’t lead anywhere special.

It’s how Minute of Islands‘ children’s picture-book aesthetic, now flipped on its head, allows the presence of illness, toxicity and the bio-mechanical, possibly-xenological tendencies of its environments, to take hold where the positive first impression stems from. How it all seems uncomfortably normal in the far-flung, island-hopping world of Minute of Islands. The game can’t be knocked for drawing up a sharp, pungent subversion of a visual style. If only the gameplay accompanying it came across as heavily-invested in and considered. Playing as lone female protagonist Mo, Minute of Islands‘ 2D presentation has you traveling amongst the archipelago of dotted-about island locales in linear fashion. The main objective usually requiring you to get to a required number of alien-like air filters littering each island. Gameplay, both during one’s travels and upon arriving at an objective, barely evolves past this, though. The requirements in the first hour are the same as they are by the fourth/fifth/final equivalent. Failing to move beyond holding down both shoulder-buttons and administering a few basic button taps in order to achieve one’s objective. 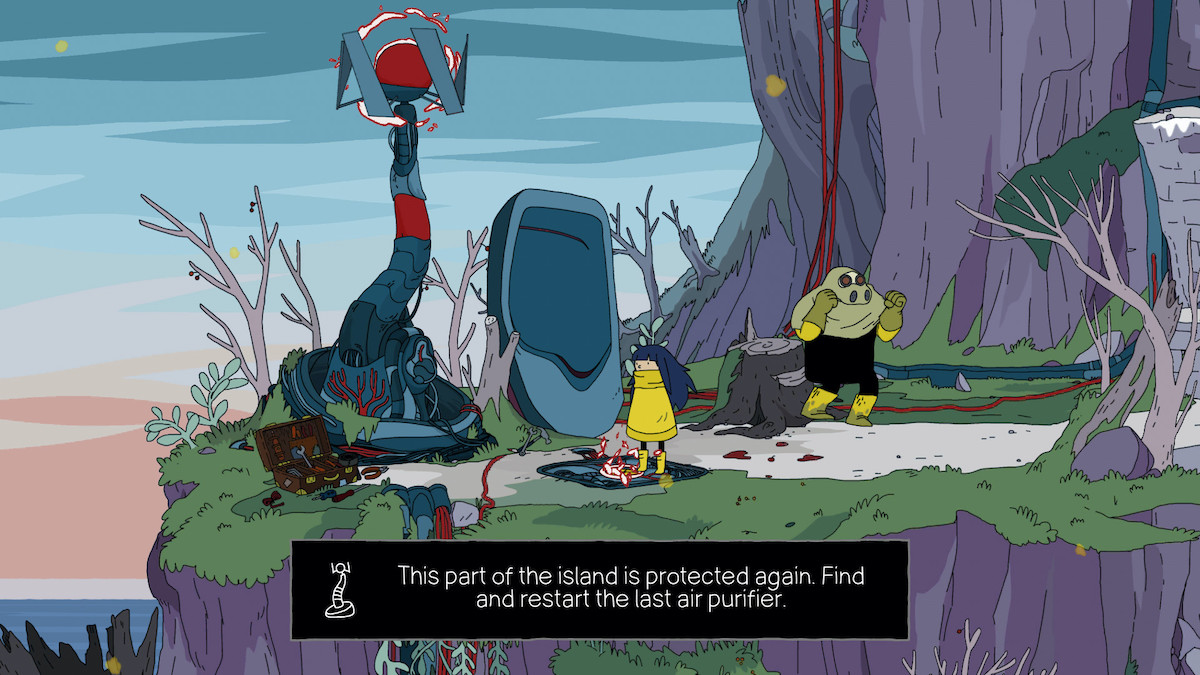 Even the platforming between regions falters so far as providing any real challenge, with blatant, painted markers indicating which areas of the environment are climbable. There’s not even a risk of fall damage with Mo’s clothing transforming into a temporary parachute so as to mitigate any sort of risk or danger throughout your entire time with the game. The most arguably-divergent attempts come during the implied “hallucination” sections where players are required to interact with a desired sequence of icons in a certain order. Make contact with the wrong one at the wrong time and the sequence has to be started from the beginning. But outside of a perspective change here and there — the camera slowly panning to focus on Mo’s shadow/reflection as opposed to her directly — Minute of Islands comes across like it’s attempting the bare minimum to be classed as “different.”

Again, a game — even of this ilk — doesn’t have to be as diverse or even incorporate the challenge of staying alive to be fulfilling. But even on the basis of these heavily-tempered expectations, Minute of Islands seems less interested with its gameplay, even if to make the slow trudge feel that bit more interesting to continue involving one’s self with. There are certain interactions with fellow island denizens and family members of Mo that do admittedly paint between the lines of its relatively-sketchy narrative. A narrative that for long periods seems to keep things vague for vague’s sake. Promise lies too in the execution of its very artistic direction. The small details like dirtied birds missing limbs or animals clinging onto life as a result of the omnipresent poison clogging the air around you. Even the way Minute of Islands‘ visuals as far as the complexity of their detail feeling cluttered comes across as beneficial to the tone it’s aiming to paint. The game wants you to feel uneasy with its juxtapose — this bizarre meshing of innocence and suffering. 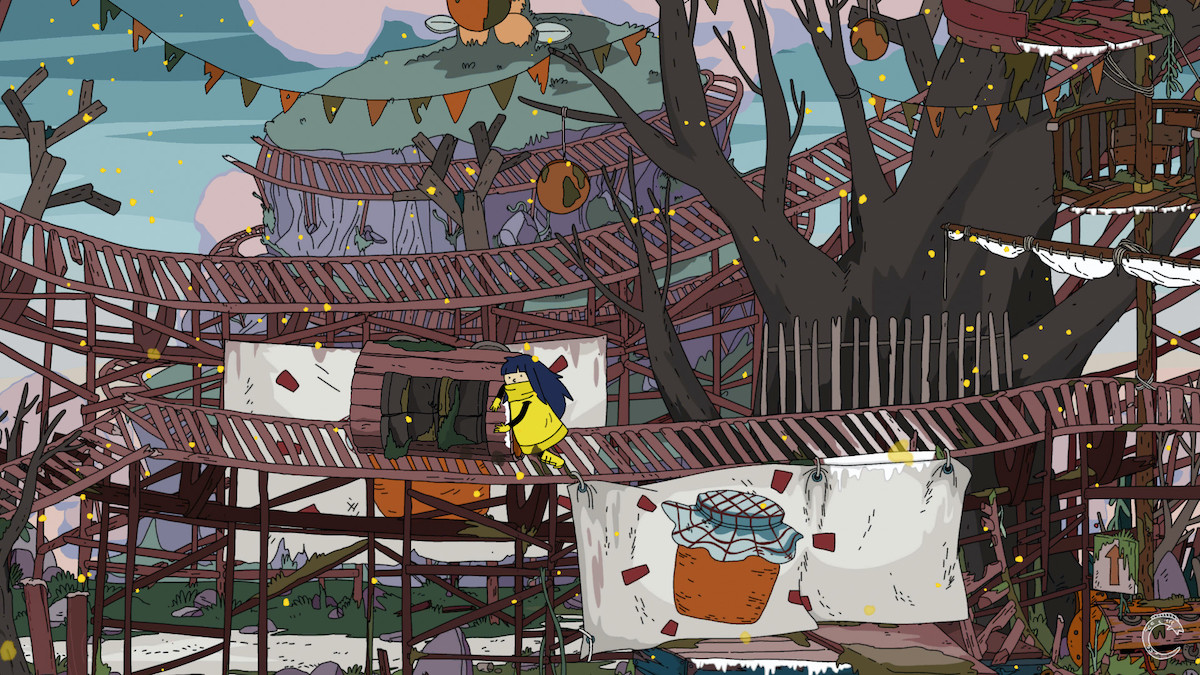 To come across the excessive presence of its bio-mechanical, flesh-slithering caverns and underground parts — Minute of Islands, for a time, makes this delivery work, even if again, this style of delivery eventually loses its pull through eventual repetition. The way too color is used not in a bright, prosperous fashion. How, in brief spells, the game dials back the brightness or intensity a touch — colors decreasing in saturation, even for the occasional cutscene. But you can’t help but feel like all this is building up to something more dramatic, earth-shattering so far as a reveal or more effective theme/message you’ve not gathered up to that point. To say the ending message doesn’t quite hit would be to ignore the ways the game doesn’t arrive at a satisfying point it strangely thinks it’s already reached. The moment the game finally delivers its end message — its message, from what I’ve gathered, centering around the idea of moving on and/or accepting what’s come before — you’re neither empathetic nor apathetic to what it says or how it says. “Oh…OK” is the best the game is likely to receive.

That middling disconnect, especially at so crucial and emotional a moment in the tale, is what sadly comes to define Minute of Islands and the reason why thoughts coming away from it are of that strangely-oblique air of disconnect. Sequences that, outside of a few moments such as one area inside a crypt — admittedly the only real “highlight” in both design and in terms of offering the most unique puzzle available — that instill neither a positive nor negative reaction in absolute. Much like its protagonist, the game has players silently, observably, wandering by requirement from one segment to the next. Offering little by way of reaction or response, simply because the game seldom provides the content or the means to do so. 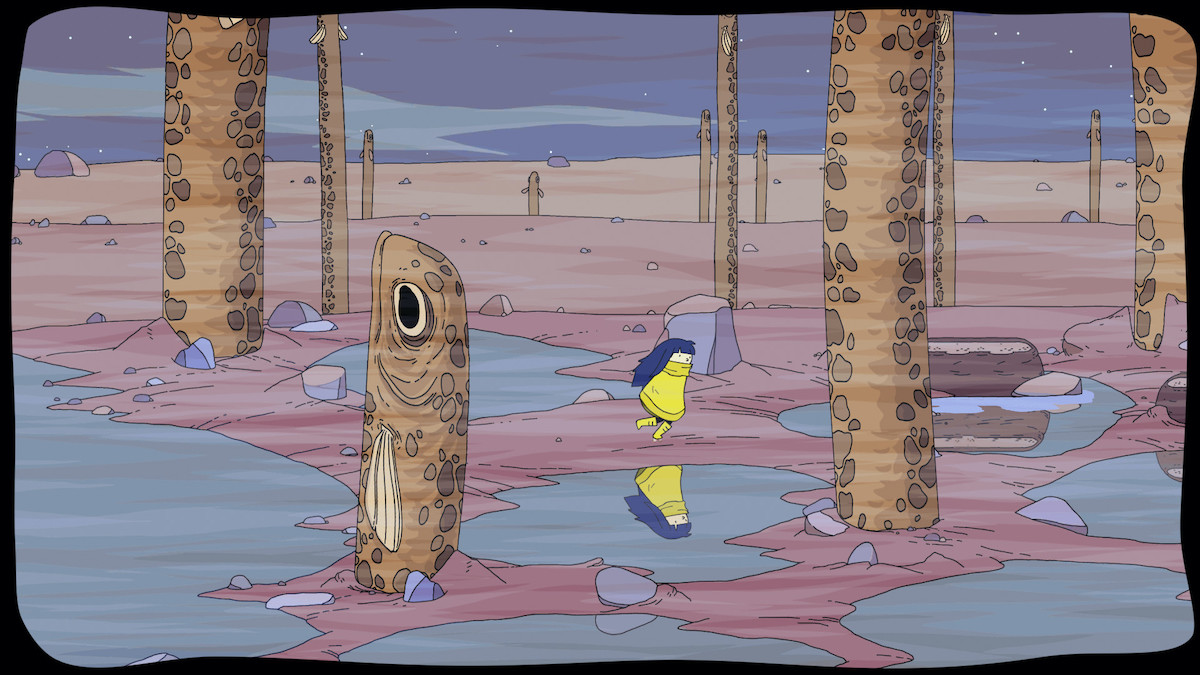 Though Minute of Islands is far from bland or unoriginal on the visual side of things, it’s the game’s lack of an equally-committed drive to its gameplay or even its delivery of a narrative where Studio Fizbil’s efforts falter as a result. While not the most substantial of releases, even in the context of this sub-genre of theme-injected side-scrolling platformers, one can’t help but hope to have discovered more in an experience like this. The origin of some parts and the reasons for others; strong and as impactful its opening remains, the game’s eventual unraveling sadly falls short of delivering on that early, promising, cleverly-distorted appearance. Pleasant that visual style and detail with its imagery remains throughout — a couple of instances where that combining of color and complexity does strike one or two favorable moments — Minute of Islands‘ unaltered, more-of-the-same approach to everything other than its imagery feels fated to be easily forgotten the moment the credits roll.