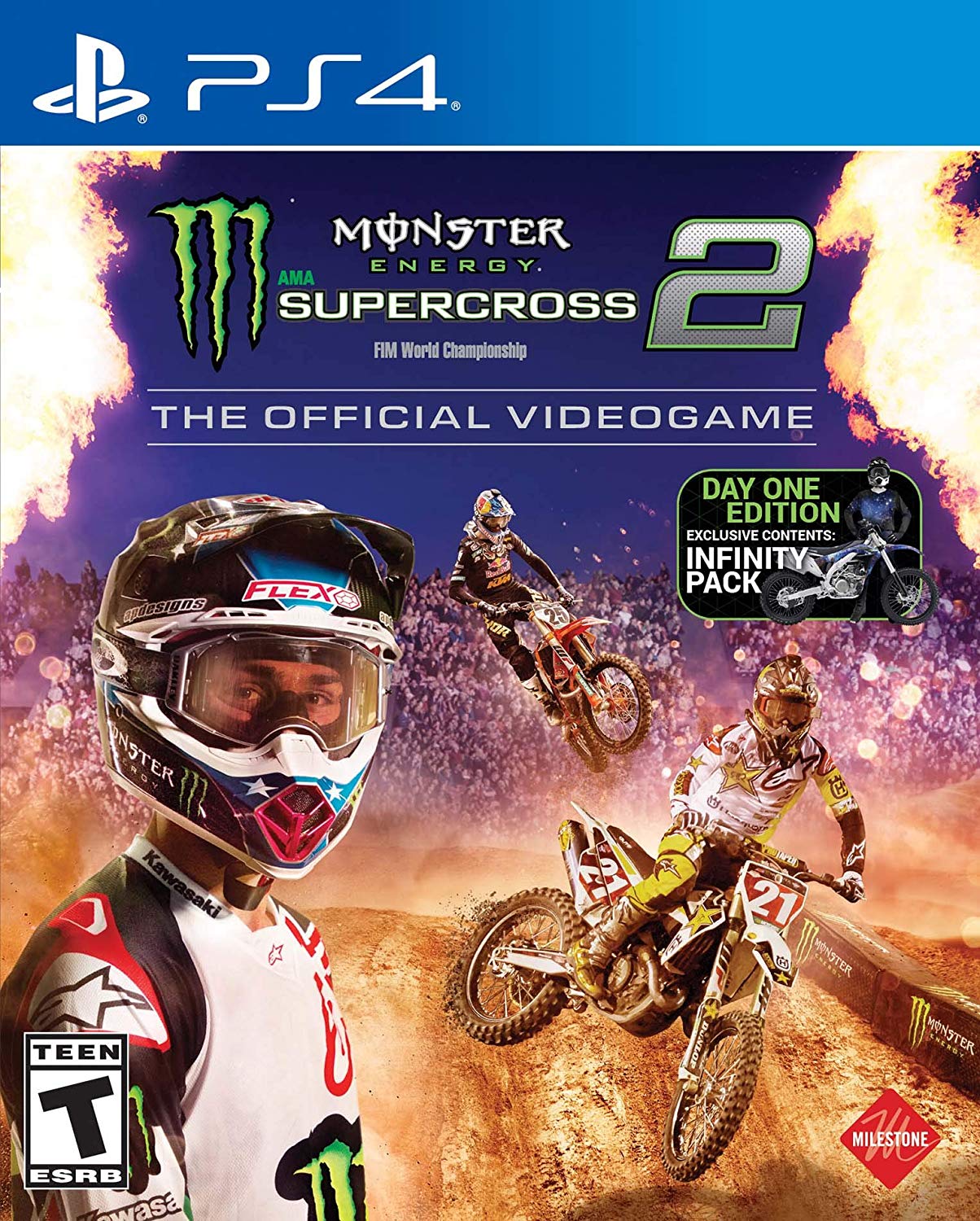 For the first time in eons, supercross fans were reintroduced to an officially-licensed game in 2018 with the release of Monster Energy Supercross – The Official Videogame. Developer Milestone, who had experience with the genre thanks to the MXGP series, took the leap of faith and started developing games featuring the American racing series. Milestone has now released the sequel, Monster Energy Supercross 2 – The Official Videogame, and is promising more content for its players along with adjustments to racing physics. The team did a solid job with the previous release in capturing the atmosphere of an actual supercross event complete with pyros and fireworks and that also carries over to this year. With all these selling points on paper, does Monster Energy Supercross 2 – The Official Videogame deliver?

Racing games should have career modes and Milestone has introduced a proper one into Supercross 2. Players will create their rider and work their way through the 250cc class to the big boys at the 450cc class. The career mode goes outside of the box and allows for the planning of events during the race week. Players can choose between training at the Compound to build their skills, or from doing media or promotional days. These media and promotional days equate to a quick cutscene, but doing these helps earn fame points. Fame points are used to gain better sponsors throughout a career. Players will then progress through a race where they can choose to do a full weekend (qualifying, heat races, main event) or a short race. Earning credits will net a ton of customization options not only for the rider, but for the bike. Buying better-looking rider swag and defining the rider has a lot of options, but comes at a steep price. Some customizations even require an extremely high level of race prestige points and cannot be purchased outright.

The career mode after gets repetitive after some time. The cutscenes don’t change and eventually the training reaches a point. Each race, while featuring a new rider introduction, never changes either. Ralph Sheheen returns along with Jeff Emig to do the commentary introductions, but are never a part of the race. As for the steep price, each piece of customization rather it be for the rider or for the bike (which includes performance upgrades), takes a grind to get the necessary credits. Credits can be earned in other modes as well, but it comes to devotion for playing a game that is not without its faults. The career mode is a step in the right direction, but it needs to be deeper rather than just changes on the surface. 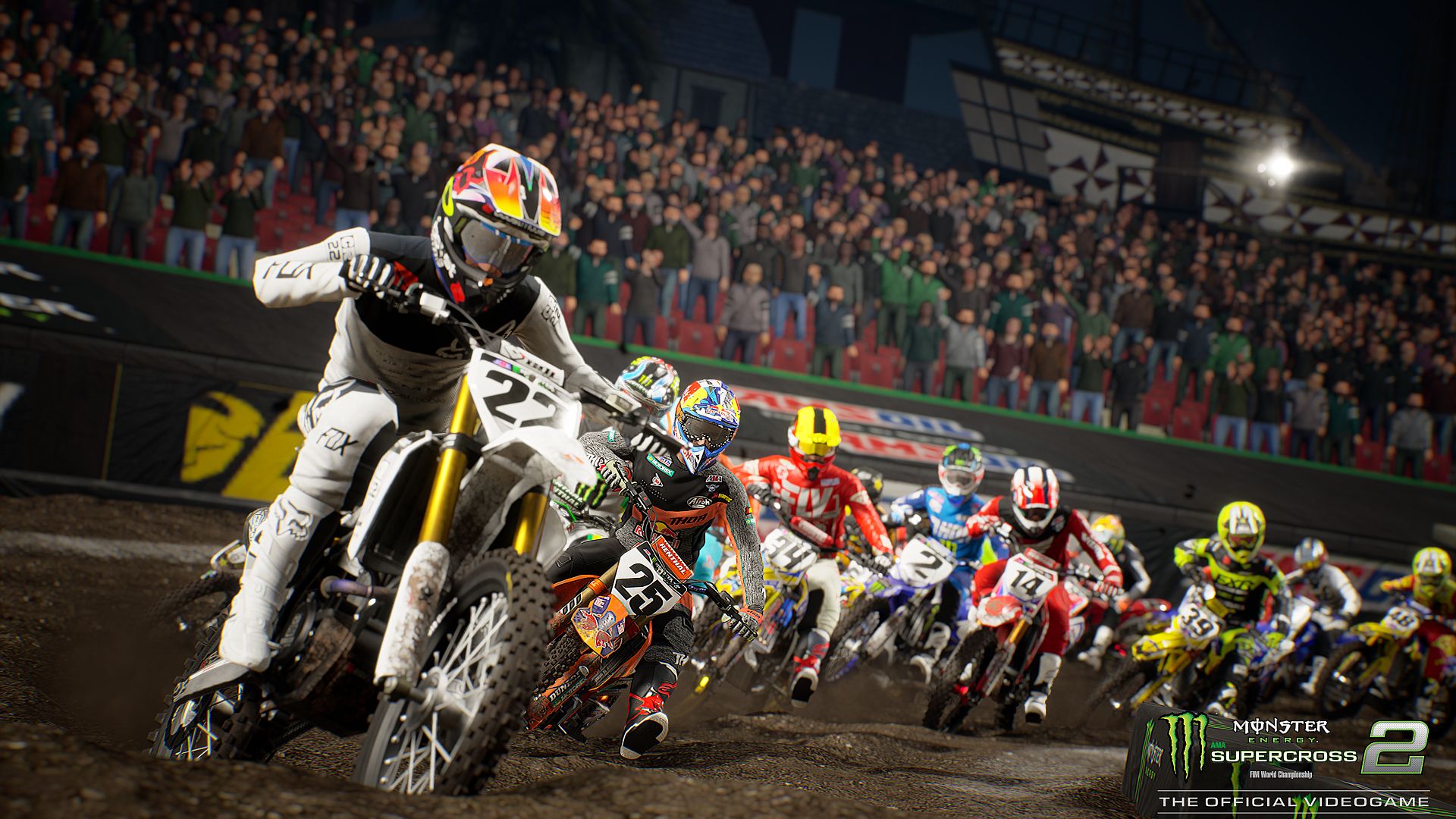 The Compound is a new introduction to the series that brings back the supercross element to its roots. The Compound is an open area outdoor terrain that has a mix of jumps and obstacles. The open-world element is cool as it does have events set up you can participate in. Going back to the grinding nature, however, other areas are locked until the player accomplishes tasks or challenges. These tracks can be used in races, but those have to be unlocked too. The initial area is big in size to play around in, but the pacing can be an issue. Stopping and turning around to line up jumps can be aggravating. There is a map located in the bottom left hand corner with designed trails mapped out, but they can be hard to identify on the actual track. This is due to the speed of the bike, so you may need to thread the throttle to get around until you learn the area. There are some things that can be built around for the Compound going forward. While the mode is a great change-of-pace, it can get old until you open up other areas. There is an opportunity to introduce multiplayer here. The area feels much like a skate park. Obviously, the focus of the game is on the Monster Energy Supercross racing, but even having an online lobby incorporated with this just to do tricks with other people would be a nice bonus.

There are other modes in the game that include just completing a championship season, single races and a time attack. All these need to be completed one way or another via challenges to unlock more areas of the Compound. This allows experimentation with other modes in the game. The Track Editor also makes its return and editing seems quicker and easier to finish tracks. There are new assets to use as well and players can share tracks with others. There is also online racing which amounts to either a quick match or creating a room. There is no lobby system and matchmaking doesn’t exist as players of all levels will be in the room. Players vote on tracks and weather conditions and enter the race. Within the online racing, lag is an issue and player positioning errors in the standings will occur. Disconnections are also common as the online experience has quite a bit of attention for the game. 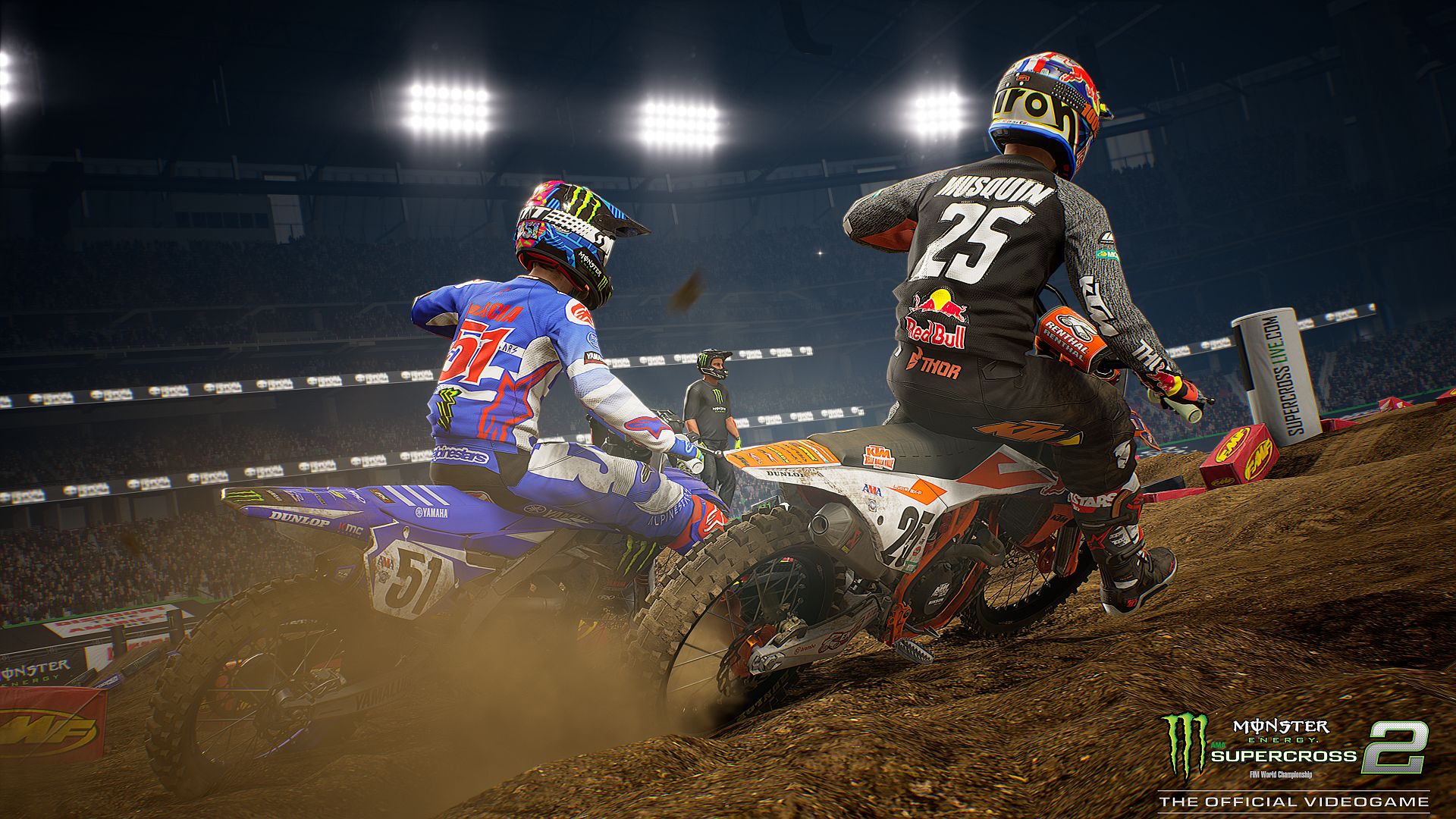 As for the actual on-track action, Milestone has stated that they have worked a lot on improving the racing. The handling and physics are supposed to be improved, and this had made the racing a bit more difficult. Rhythm is key in supercross racing and it seems more difficult to keep your speed up in this game. Feathering the throttle out of a corner almost seems nonexistent, as many times the bike will just dart to far inside and it becomes even more difficult to counter-steer. Attempting a scrub doesn’t necessarily feel natural with the left and right stick combination. The bike physics do not help with that. There’s a racing line that can be enabled to see the expected trajectory, but ultimately appears in the middle of the jumps. You have to know the tracks and learn your points and that will take a bit of time.

Collisions seem less ridiculous this time around. No longer will you be riding the head of an opponent if you land on them. At the same time, if a barrier is thrown into the track, it will now disappear and not sit there the entire time. Collisions with other riders in general doesn’t heed much of a response unless you go full throttle into them. At this point, they will be hilariously thrown from the bike. The AI also pays you no attention. Occasionally you will see an AI rider go down, and rather than racing the AI, it just feels like it’s on the track. While the online may have its issues, I did enjoy racing humans more. You can change the difficulty, but the higher you go, the AI will pull away unless your a veteran on how the game controls. 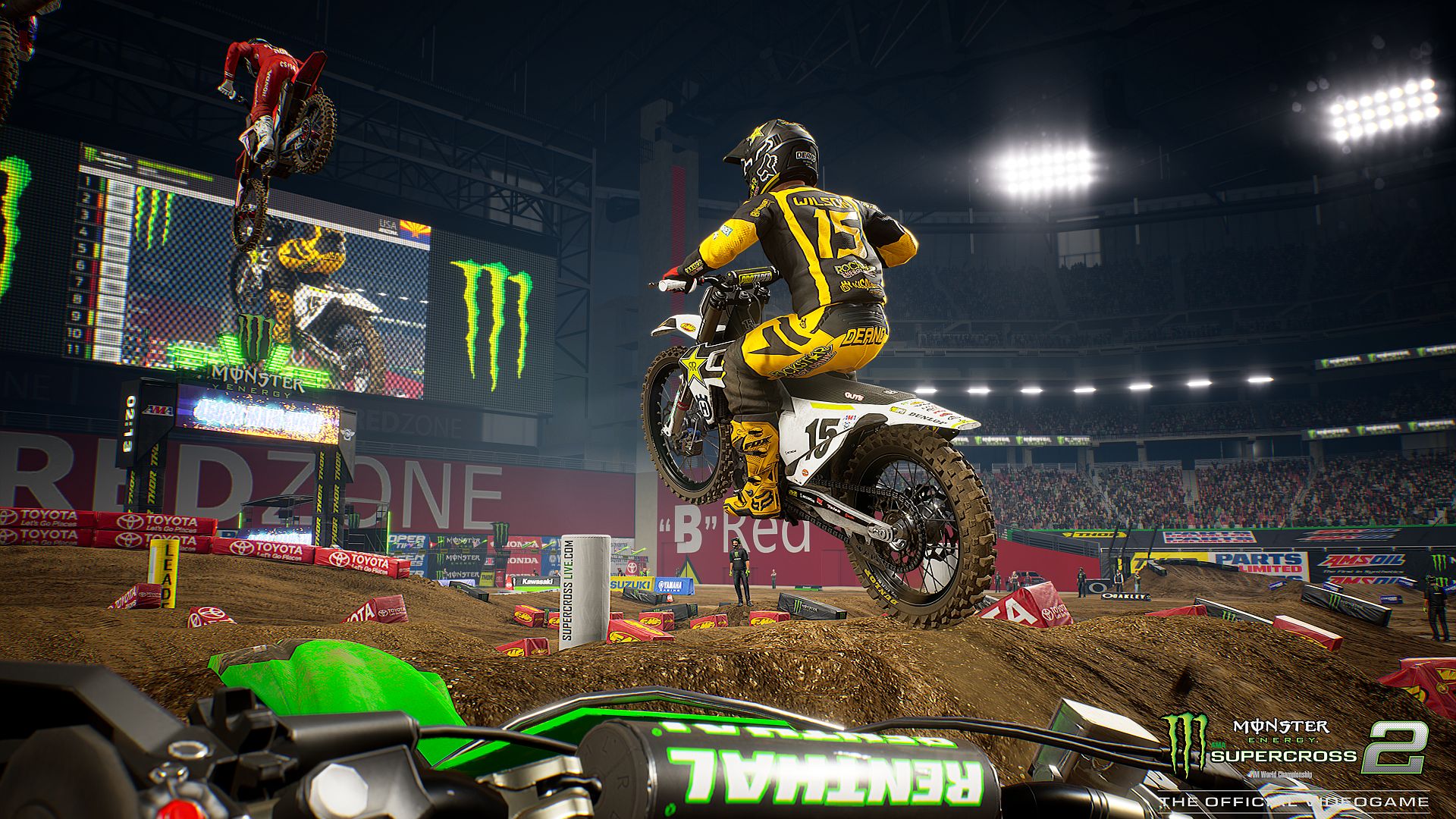 Supercross 2 runs on the Unreal 4 Engine and does get some visual improvement from the past version. Lighting is better on the tracks, and the actual dirt now has identifiable ruts and lines to follow. Sand is now on the track and racing in weather looks cooler and does make a difference on the track. Stadiums are accurate representations including seeing the pirate ship in Tampa. Milestone has stated that with a new face scan technology, the player faces would be vastly improved. The faces get a boost from last year, but ultimately are still lacking. The bike models do look good as the colors pop and the reflections come across realistically. The game does accomplish a completely solid frame rate with handling 22 riders on the track (at least on PS4 Pro) and is pretty in certain shots.

One great aspect that Supercross 2 accomplishes is its atmosphere. Thanks to the sounds of the game, this feels like a game meant for supercross fans. The in-racing soundtrack is a mixture of good punk bands and the menu music is fitting. The sounds of the bikes themselves are replicated well. Crowds respond promptly as a PA announcer can be heard faintly in the background calling the race. 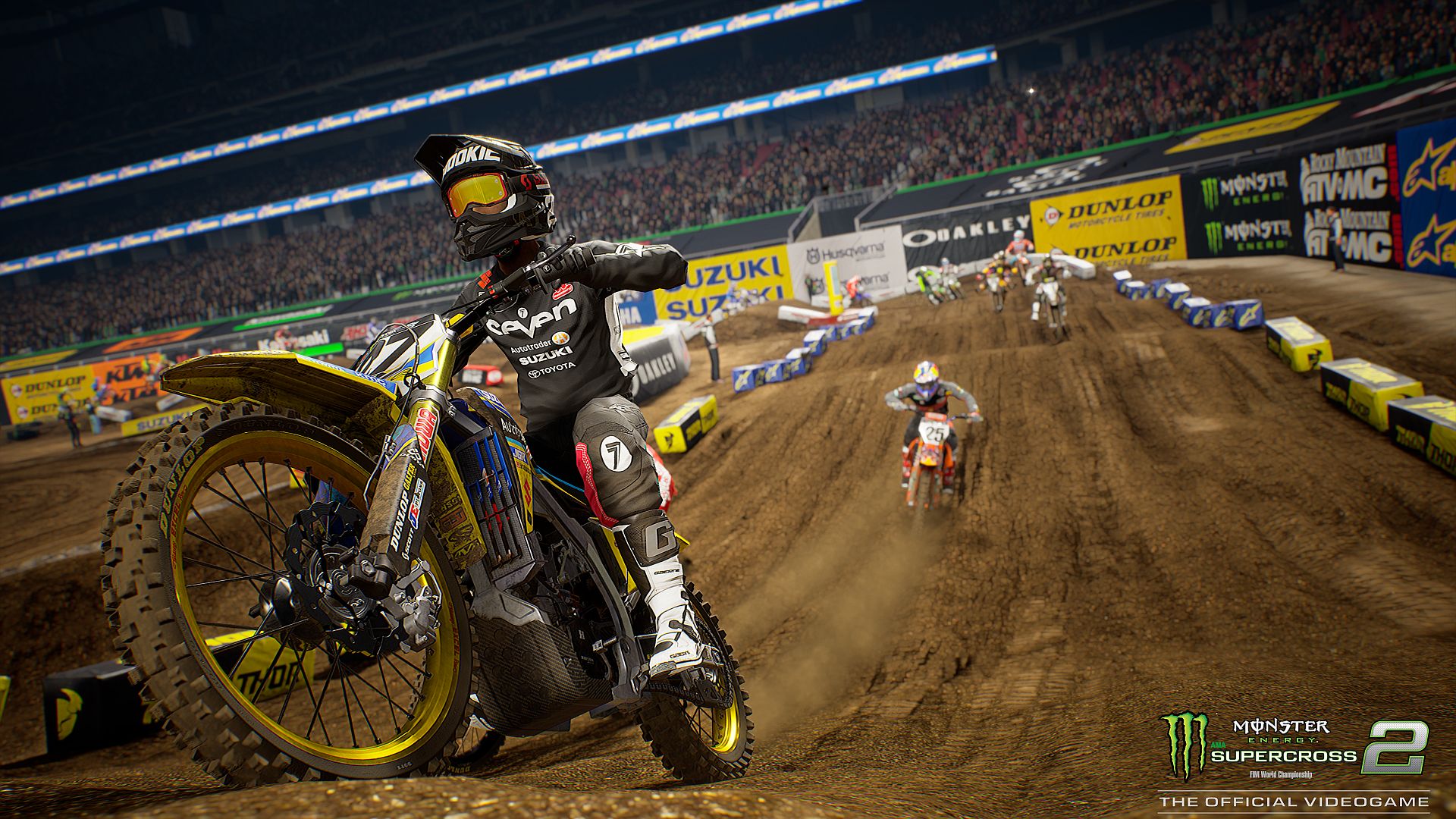 Monster Energy Supercross 2 – The Official Videogame introduces some new and appealing aspects to the series. The Compound has the ability to be a game changer and the career mode is different on the surface. There are tons of customization options here, but ultimately it becomes a grind to purchase or unlock the items. Fans of the first game will ultimately love the changes, but the casual rider will have difficulty adjusting to the way the physics work and the actual racing. Learning the track and knowing when to accelerate and brake will require time to master. The online experience needs more of an investment to not only correct but also progress. Also, the game is still based on the previous season, and is missing fan favorite Ken Roczen. Capturing the essence of the sport for the fan is something Milestone has gotten right, but the game still lacks in the most important area, and that’s the racing.