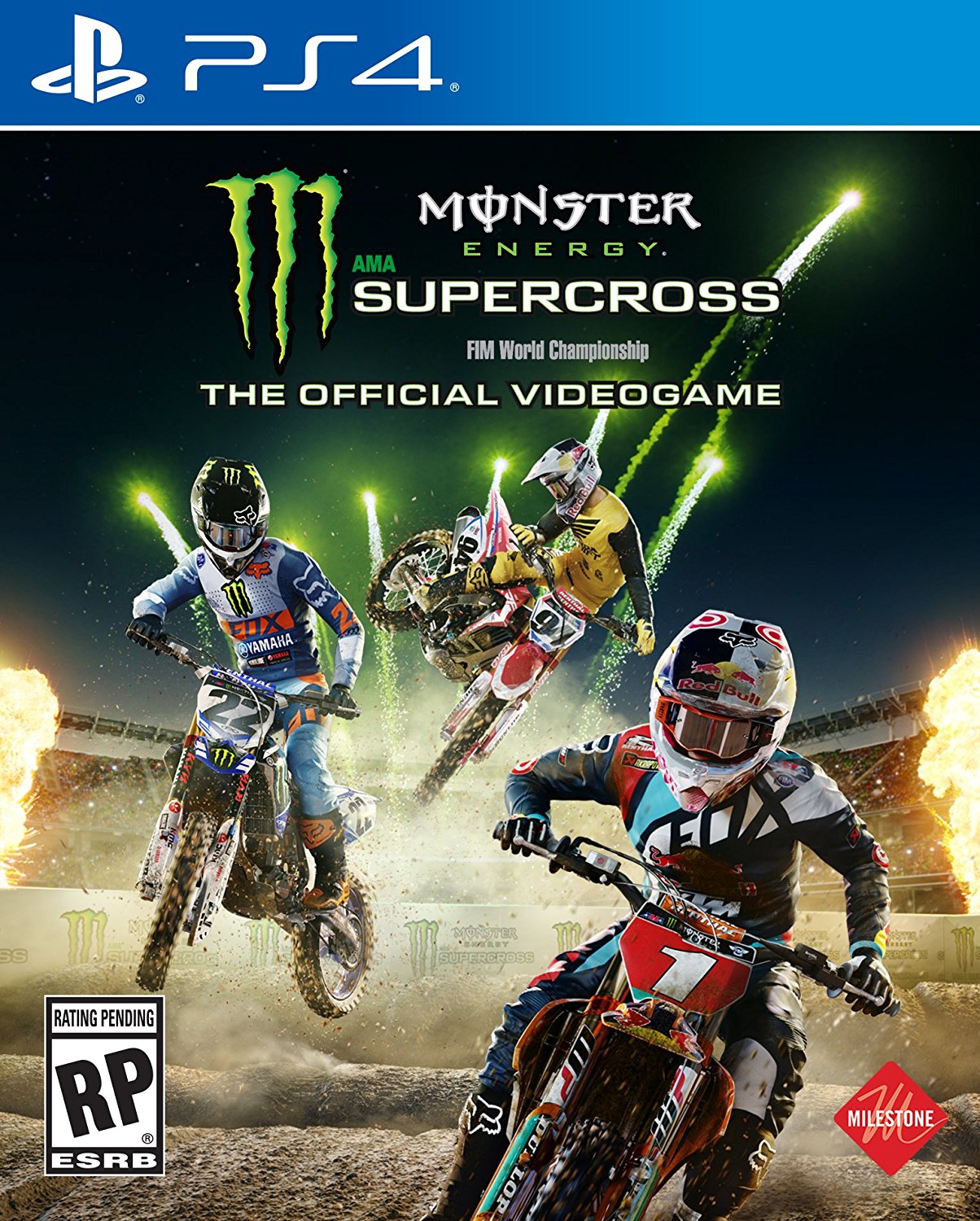 It has been years since there has been an officially-licensed AMA Supercross game in the world. Back in the days of the late 1990s, there was competition between both EA and 989 Sports (Sony) with two solid entries to support the license. Fast forward to 2018 and developer Milestone, the team behind the MXGP series, has acquired the license to the Monster Energy Supercross circuit. In doing so, the team has created Monster Energy Supercross – The Official Videogame to bring fans a game to be excited about. The game features the riders and the bikes from the 250Sx and 450Sx divisions, along with all the tracks. It offers even more, but is the experience enough at the end of the day?

Monster Energy Supercross brings in riders such as Ryan Dungey and Ken Roczen along with every rider from the 2017 season. The current season, however, is under way and while there might not be a lot of differences between the two, the 2018 season will feature the new Atlanta Supercross. That means the game is missing this. Other than that, players can participate in the 2017 Championship along with a Career Mode that offers the 250Sx East and West classes along with the 450Sx main class. Other modes include multiplayer, time trials and single events.

Players will earn Prestige Points that are used to purchase upgrades for the bikes and for the rider. Prestige Points can be earned in any race, but ultimately the goal is to beef up your bike for the Career. These points come from finishing events and completing simple in-race objectives such as landing jumps and overtaking. The performance and look of the bike can be improved throughout the season along with unlocking new sponsors. Monster Energy Supercross includes tons of officially licensed parts to deck out your bike with. There are plenty of customization options to keep things fresh as up to five configurations can be saved. The customization aspect is appealing and includes a track editor. Not since the days of Excitebike on NES could players lay out their ideas for a track. More importantly, customized tracks can be shared and downloaded with people online. Players will choose the arena type they so desire which range from outdoor rectangle fields to indoor baseball diamonds. From there, players will choose a designed starting gate that vary in length and exit. Once this is done, players can add any type of section ranging from short and long straights to triple jumps and special corners. Lastly, players will need to choose where they want their finish line and the track needs to be verified as complete before sharing to the world. While this all sounds great, I had more than my fair share of trouble finishing the track. 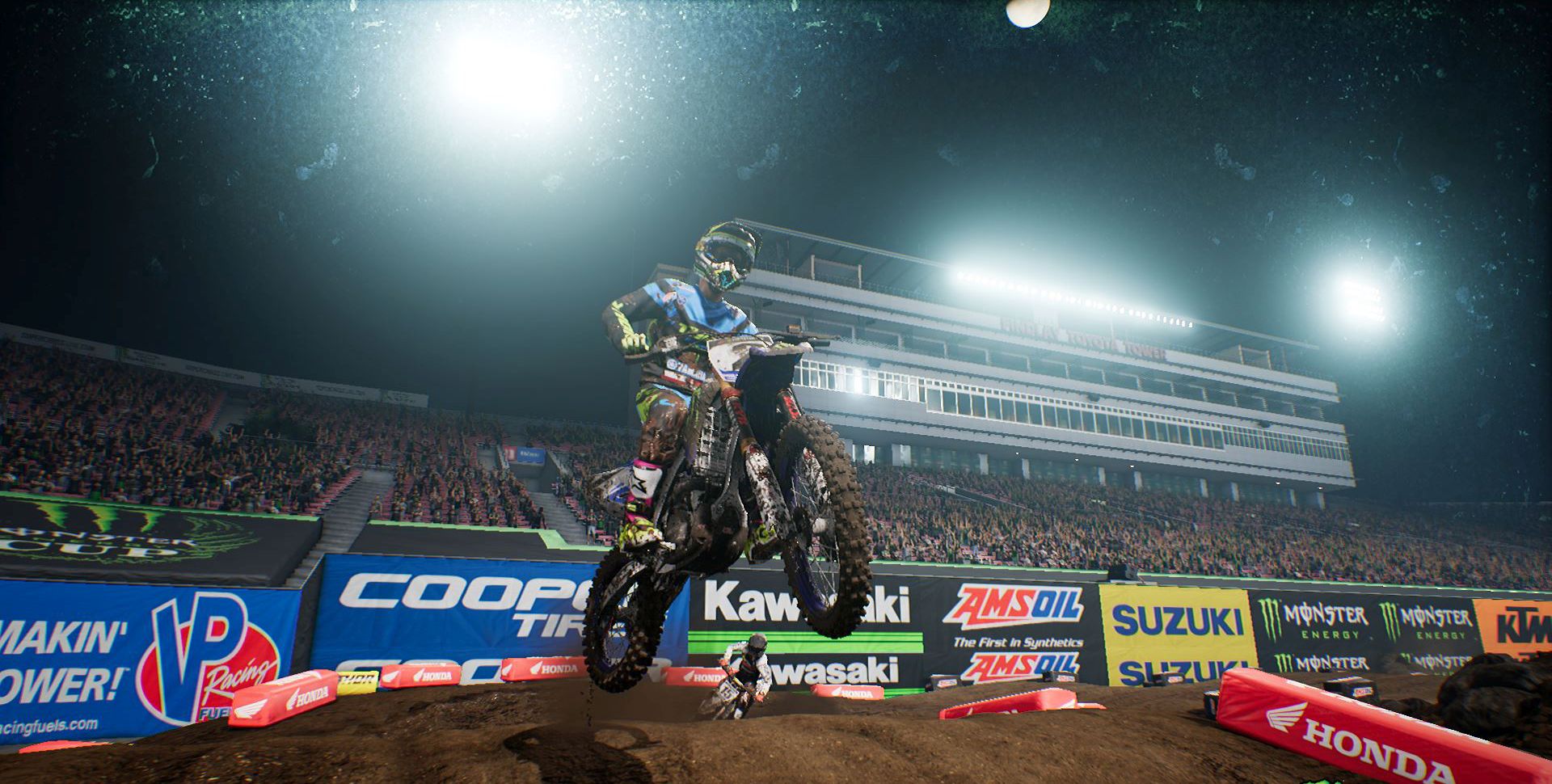 The editor lacks a sectional delete button, which this is a serious flaw. You’re able to use the d-pad to go back to specific sections and change them, if it will let you. It becomes a huge problem with finishing the track. The tutorial isn’t deep or intuitive as it moves fast and doesn’t offer much help beyond the basics. Once you get stuck, you have to start all over. While there are already tracks up on the server that others have created (so it is possible), I couldn’t get a track completed. The need for a quick sectional delete button is dire. Additionally, inserting a bridge has to be completely precise and when that delete button is lacking, this makes things more frustrating. Hopefully this can get patched in.

While Monster Energy Supercross offers a lot of paper, people are here for the racing. If unfamiliar with developer Milestone, the team previously worked on the MXGP series. They aren’t just jumping in to create a Supercross game, so there’s some experience there. Those familiar with that series will be familiar with how this game plays. Monster Energy Supercross runs on the Unreal engine, which is a bit unorthodox for a racing game. The physics can be a bit strange at times and ultimately lack consistency. Riding dirt bikes is all about rhythm and how to approach each individual jump and section. It’s about measuring speed into corners. The overview of the aspects are here, but a game like this needs more control and the Unreal Engine doesn’t seem to be the best at doing that. There’s times where I’ve landed on a group of riders and just sat on their heads for a distance.

Controller feedback on bumping and colliding is ultimately lacking, which takes away the immersion of being on the track. Cutting tight corners tends to throw you into a barrier that may or may not be stagnant and trying to correct it can make things worse. Having a rewind option for these moments help make up for it, but it shouldn’t be a necessity. The AI doesn’t stand out as being good or bad, rather just sufficient. They’ll wreck and do sense where you are on the track. The more time you spend learning each track and their nuances, you get better. When you find that rhythm while maintaining speed on the track, that’s the hook of not only the gameplay, but of the sport. 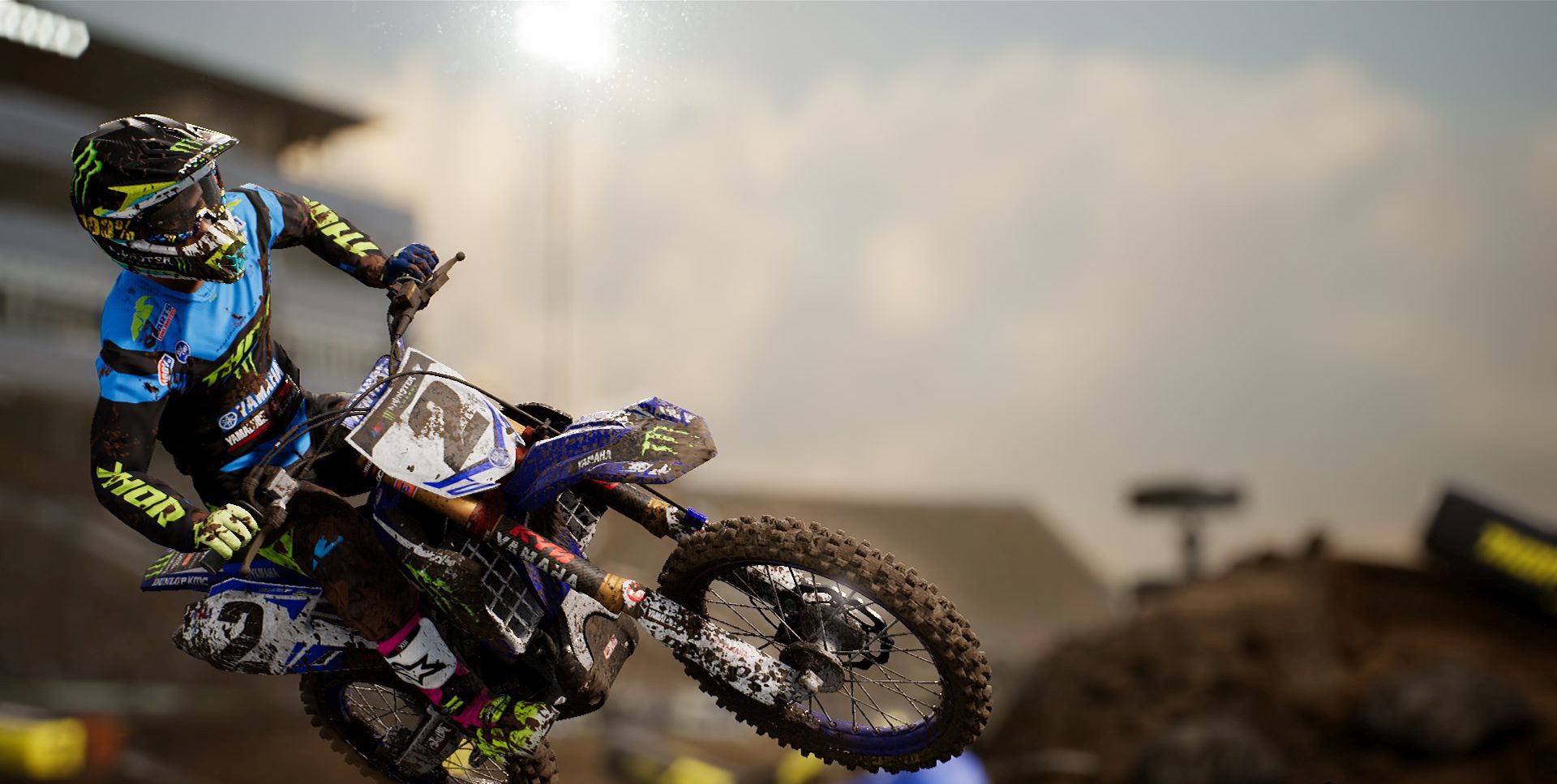 The Unreal Engine brings Monster Energy Supercross to life. Featuring introductions full of illuminated pyros and dialogue by famed announcer Ralph Sheheen, Milestone has done an excellent job in recreating the pre-race feel of an event. Couple this with podium celebrations after each race and these are all great touches to implement into a first release. The lighting adds to each stadium and it creates some lens flare. Tracks can be raced in the dry or the wet and the track truly shines in the rain. The physics also take this into effect to add even more diversity to the racing. The game runs mostly at a smooth framerate, but doesn’t hit 60 FPS. During holeshots, the framerate will bog down badly. There’s also random hesitation in the races. There needs to be some more optimization here as this was played on a PS4 Pro. Some of the custom player models are lacking in realism, but the real racers’ faces offer a good representation of each person. There are also four camera angles to choose from. Two are chase cameras, but the other two are from first person (one with a helmet and one without). The first person view is neat but will take a while to master. It’s hard to tell what is around you or to look down to make sure you haven’t run into something. The chase cameras will zoom improperly if a rider gets behind you.

Finally, the multiplayer aspect features lobbies and quick matches. Players can race with AI on the track and different realism options. Multiple races can be done for a championship, although there’s no official championship for online. There is no matchmaking so riders from various levels can be grouped on the same track. Connecting to races was an issue as they would either timeout even though the room was still active or the game would just crash altogether. During a race, I was prompted with a please wait box as my bike kept going straight and I had to restart the game. When I was able to complete a race online, I would notice lag with other riders. 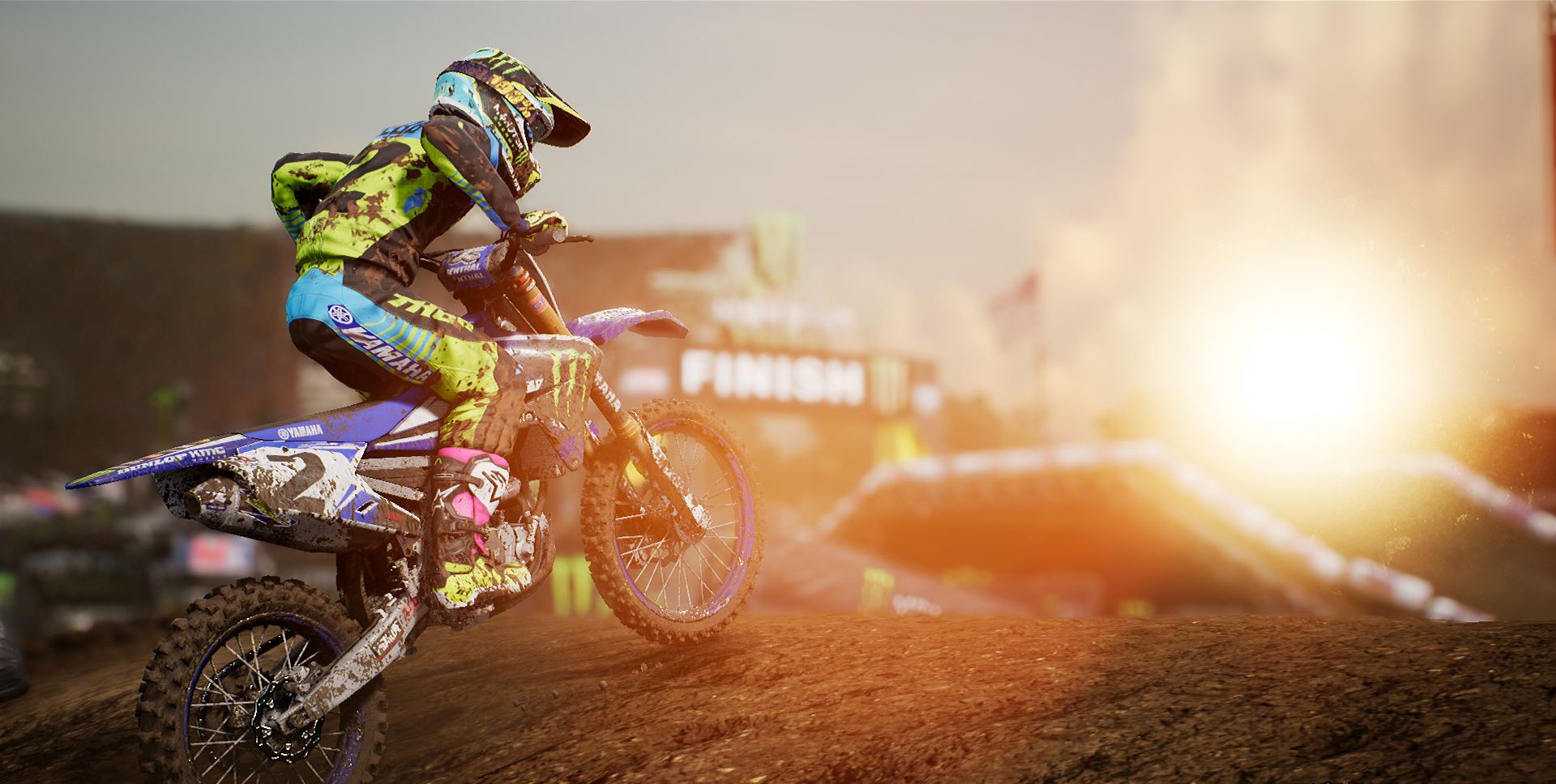 Milestone has a solid footing with Monster Energy Supercross – The Official Videogame. If the team offers continual support that carries over to new titles, this series has the potential to be something special. While it has a few bugs and nagging issues that need to be ironed out, none of them are game-breaking. Capturing the feel of the pre-race and post-race festivities is an aspect that other racing games are behind on. The visuals, especially the lighting, stand out but the immersion gets brought back to earth due to some inconsistent physics from a graphics engine that’s normally geared for shooters and adventure games along with some other graphical hiccups. Most important is the fact that Milestone has brought back an officially-licensed AMA Supercross game for the world to play.