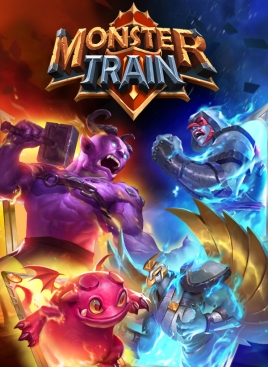 Last year, Slay the Spire left Early Access and captured the hearts of many with its impressive deck-building gameplay that made for a challenging and fun card battler. And speaking from personal experience, it is indeed an addictive game that ate up a lot of my own time. So when a similar roguelike strategy game shows up these days, it means going up against a bar that’s been set high. And with that, enter Monster Train, a new title from Good Shepherd and developers Shiny Shoe. Could this fellow card battler even come close to clearing the bar? Let me answer that question by pointing out that I went back to it to give just one more run a shot and before I knew it it was sometime around 2 AM after several other runs. Consider the bar cleared.

If you were thinking that you wouldn’t come across another good deck-building game until Hell froze over, then you’re in luck, because that’s the setup for Monster Train’s story. Heaven has extinguished all of Hell’s Pyres, but one Pyre managed to survive. So now the Pyre is powering a train headed through all of the various layers of Hell in order to reach the point where they can reignite everything, with various clans teaming up to protect it from the invading forces of Heaven. And they’ll need all of the help they can get, because Seraph and his friends aren’t necessarily the peaceful type.

Judging by the screenshots, you may be tempted to see Monster Train as a version of Slay the Spire, except with more units on your side. While there are similarities in presentation, or mechanics like the energy used to play cards that refreshes in between combat or the various artifacts with passive boosts that you can collect, where Monster Train stands out is how each battle plays out. The car carrying the Pyre actually has three floors to work with. After each round of combat, any surviving enemies advance up to the next floor. If they clear three floors, then they reach the top room with the Pyre, and while the Pyre isn’t defenseless and can attack all enemies with some notable damage, it’s game over if its health ever reaches zero. 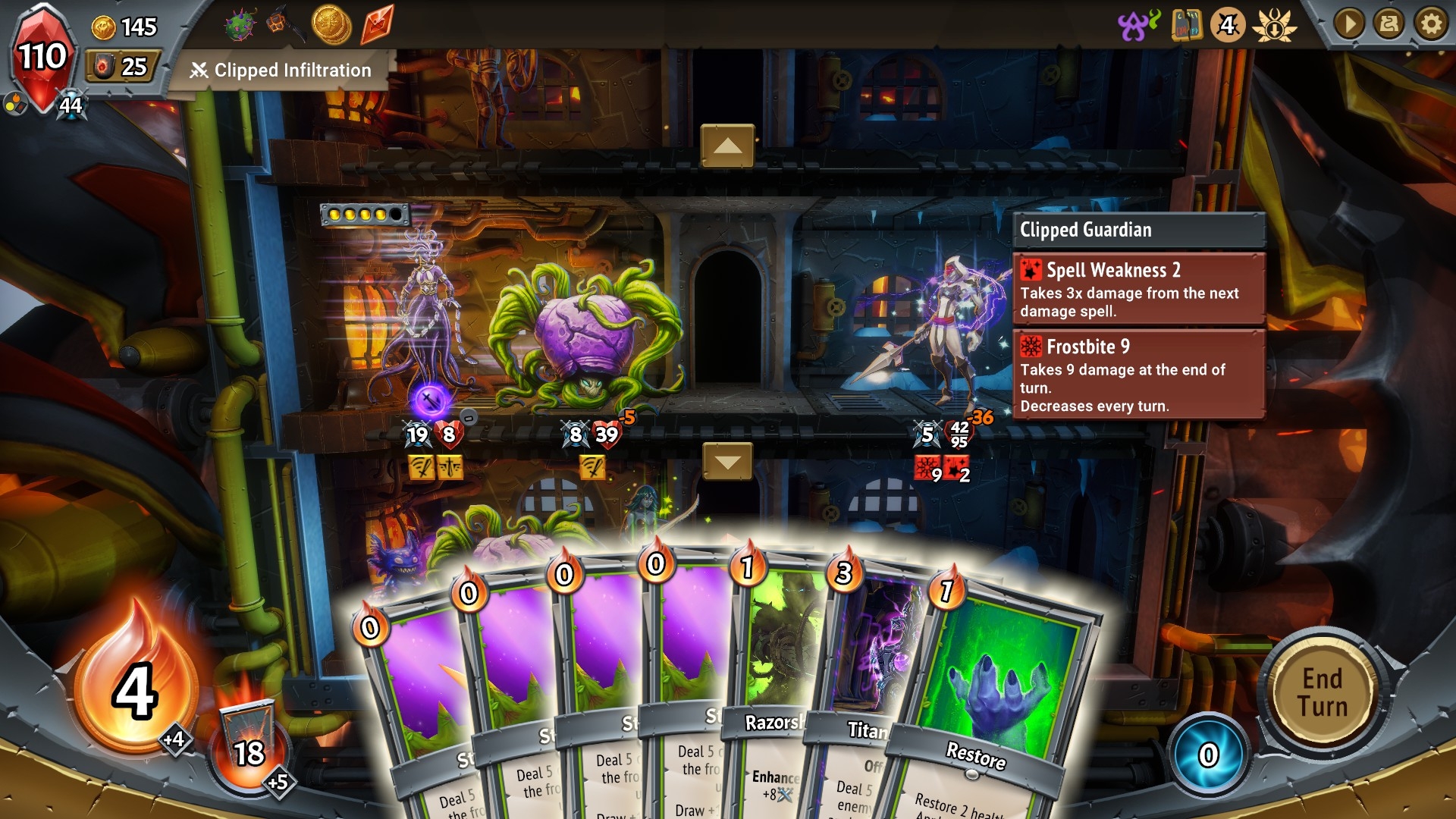 The core strategic element is set up here in Monster Train is figuring out how to properly place your various units. You may try to go for making the first floor be as powerful as possible in order to quickly eliminate all threats, but you still have to properly set some up on the above floors as well in case anyone gets through. And to complicate things even further, each floor can only hold so many units, with each one taking up a certain amount of space. So you carefully have to decide which potential combination of units to use with the given space, as well as order placement, as the unit in front is the one that the enemy attacks, and the same goes for attacking Heaven’s various forces, so you may want someone up front who can take a lot of damage while having ways to break through similar defenses up front…yeah, the game provides a lot to consider.

It’s a level of strategy that makes for a terrific challenge, yet at the same time is still easy enough for newcomers to get into. At the same time, it also encourages experimentation though the five clans that you can play as (three of which have to be unlocked). At the beginning, you select a primary and secondary clan, with the primary determining the zero-cost champion that you start out with, and both determining which cards you start with and can gain along the way. Each clan has certain themes and mechanics that they tend to dabble in: the more traditionally demonic Hellhorned have cards focused on dealing damage and small imp minions than grant various effects when summoned, the grassy Awoken tend to have their cards focus of healing and regeneration buffs, and the shadowy Umbra have ways of summoning small minions called Morsels which they can devour after every turn to gain various boosts.

Basically, if you’ve ever wielded a dual-color Magic: The Gathering deck, you should have an idea of what to do. Success comes in figuring out the correct combinations of cards, card types and upgrades that all make for near-unstoppable combos. My first win, for example, came with the Stygian Guard as my primary clan and the Hellhorned as the secondary. The Stygian champion, Tethys, as a potential upgrade you can earn along the way that can reduce the energy costs of spells by 1. And not only do the Hellhorned have several low-cost spells that basically allowed a ton to be cast for zero energy, but a lot of Stygian units have the Incant ability, which boosts their various stats when a spell is played on their field. So top that off with the heavy hitters that Hellhorned provides and I was dealing out tons of cheap damage while boosting my troops in the process. It really is just a joy to find a winning combo that works for you. 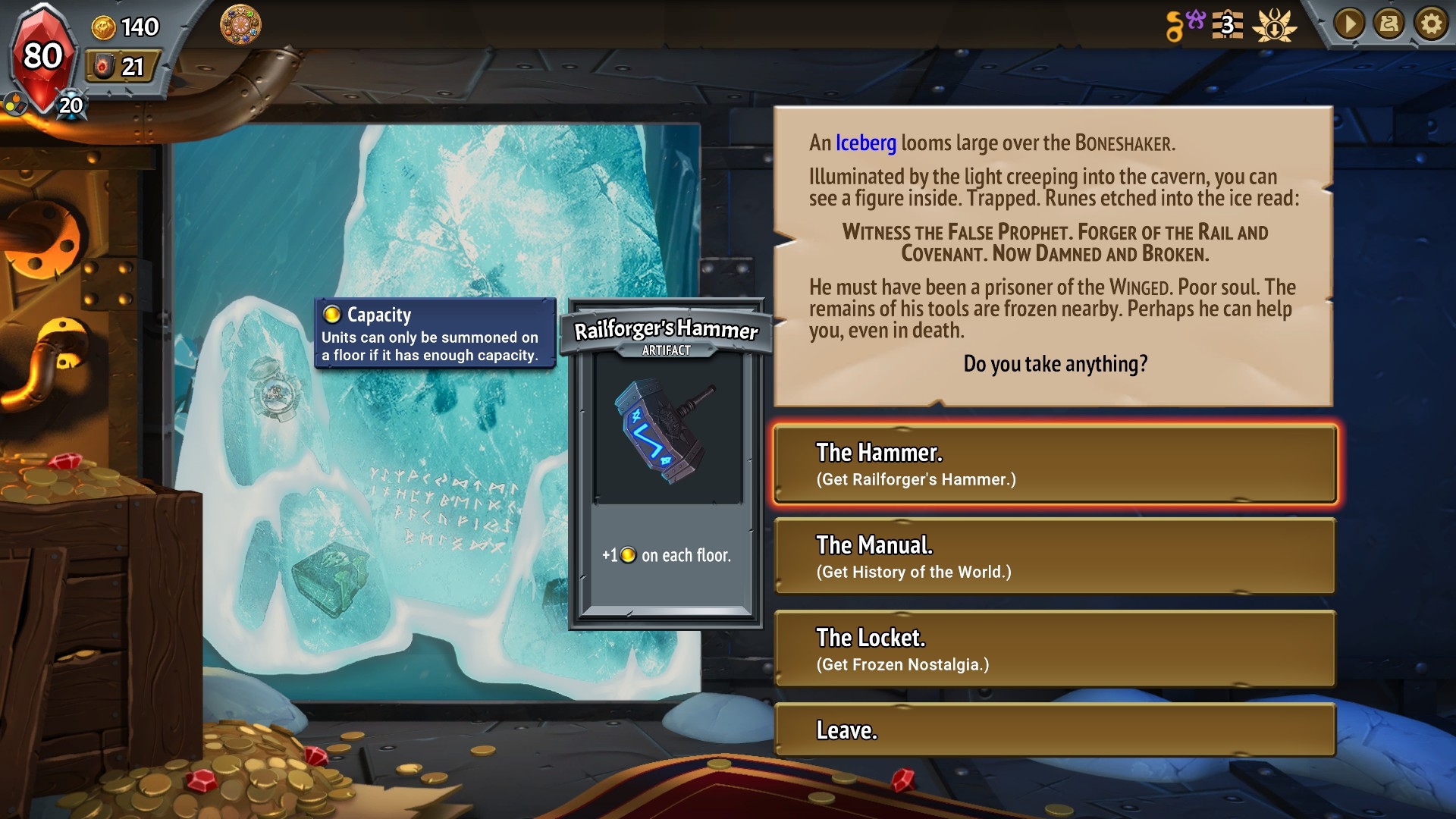 Of course, a key word back there you may have noticed is “potential” upgrade. As Monster Train is still a roguelike with randomized playthroughs, you have to work with the cards you’re dealt or with whichever upgrades are offered for your champion. You earn new cards to choose from after each battle and you can upgrade each card at shops in between, with each card having two slots that you can fill. You also have frozen caverns with random encounters, areas that can duplicate cards you have, ways to heal the Pyre, spots to pick up additional units and more. The catch is that these are presented via two sets of train tracks to follow, with three areas to visit on each side. So you have to carefully choose which side has the better odds of being the most beneficial, with one side maybe having the unit upgrade shop you may need, but it’s the only area that benefits you on that path, while the other has a shop and what appear to be two freebies.

Oh, and just to add another twist, you have optional trials as well. Before each battle, you select to undertake a trial, meaning you face off against stronger enemies, but you’ll earn extra gold, units or artifacts as well. Unfortunately, certain battles — such as those against major bosses — have the trials activated regardless and I’d be lying if I said a few tactics from certain enemies didn’t feel annoying after a while. See the boss that starts by placing statues with huge hit points in the front position on every floor for a good example. So like any similar roguelike, you do get the occasional annoying run where the randomization is working against you.

But for the majority of the battles, Monster Train still delivers superb strategy. Its excellence comes down to having simple card-based gameplay and strategical turn-based battles that anyone can understand, mixed in with a ton of variety in the units, enemies, upgrade combinations, artifacts, spells and more, making sure there’s a near-endless supply of scenarios that require a near-endless supply of clever tactics. In a way, it’s the type of game that’s deceptively simple in all of the best ways, luring you in with quick card battles before perfectly raising the stakes with every ring afterwards, always keeping you weighing all of the options. It’s just plain fun and allows for a lot of replayability. 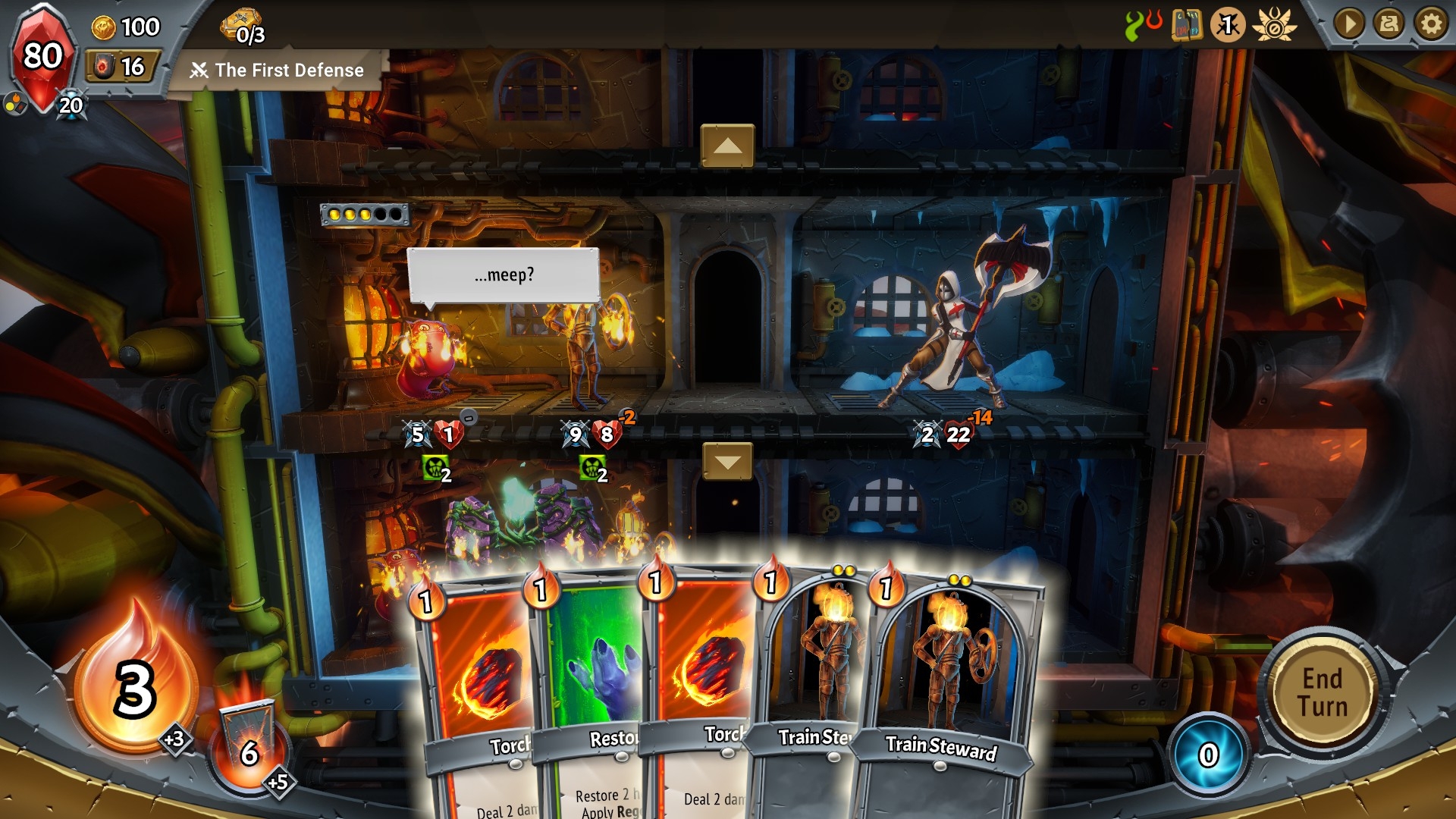 Really, about the only complaint I have gameplay-wise is that when you have more units on both sides to deal with as time goes on, with ever-increasing amounts of health, it means that the later turn-based skirmishes can actually take quite a while to get through, especially against the bosses which attack each floor in continuous battles until they or all the units on the floor are dead. There is indeed an option to speed up the battles, but there’s something awkward about switching between the different speeds at times, such the Ultra and Super Ultra speeds getting a wee bit jarring and freezing for a bit when you try to switch back to normal…and during at least one situation, I think Ultra Speed may have crashed the game after several uses (though that could very well be my computer).

But heading back to some final positives, it also helps that Monster Train is visually pleasing as well. All of the monster designs are nicely designed and varied, from the adorable Imps and Morsels to the more Eldritch-like beings, as well as the nicely bright but sinister enemy designs. They’re a colorful batch with just the right amount of cartoonishness that catches your eye. Little bits of dialogues from them during battle also add a nice bit of flavor, and the orchestral soundtrack is definitely a delight that perfectly suits the battles as well. The end result is that every match feels like an epic battle between Hell and Heaven, with just the right amount of odd tweaks. 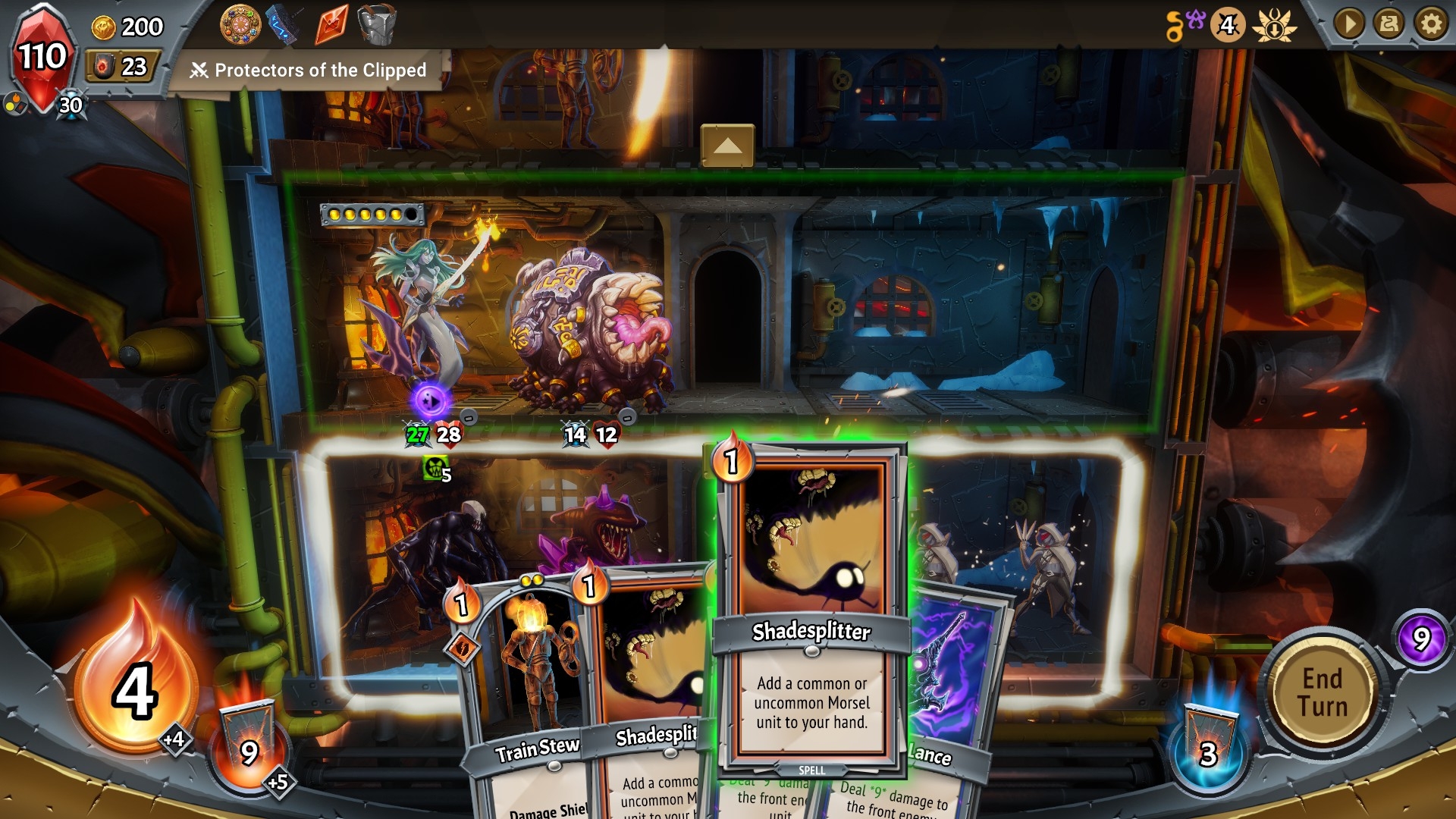 It would be easy to dismiss a game like Monster Train as nothing more than yet another entry into the ever-increasing deck-building genre upon first glance, but after just a short while playing it, its various complexities begin to reveal themselves, making for deep gameplay that keeps you coming back for just one more run. Much like the best puzzle or strategy games, Monster Train excels in being insanely addictive, all while being easy to learn yet hard to master. Shiny Shoe should be commended on this labor of love, an absolute gem where controlling the forces of Hell feels like a blast of heavenly fun.