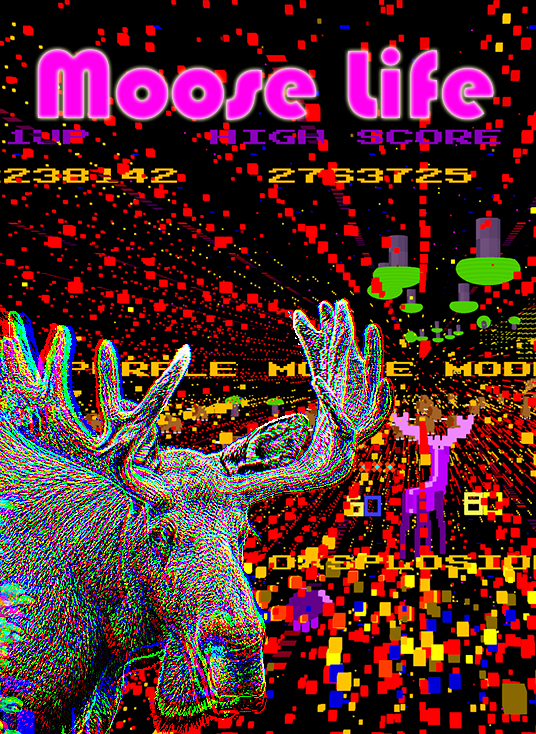 The thing about muscles is they need a nice massage every now and then.  Lifting things works up the shoulders and arms, running stresses the legs, and the back is a giant whiny mass of complainers that are never happy with anything.  Eyes, though, aren’t muscles, but even so after a full day of staring at things it can be nice to give them a good photonic rub-down.  It would be easy for strobing lights and insanely pulsing colors to overwork the eyes rather than soothe them, but when done right you can sink comfortably into the chaos, riding along while orchestrating the light show into ever more frenzied bursts of shattering patterns.  Llamasoft has been working this particular style for decades now, from Tempest 2000 onwards, and while Moose Life may not reach the gameplay heights of Space Giraffe or Gridrunner++ it’s still a wonderful trip into voxel-shattering visual overload.

Moose Life is quite possibly the single most Llamasoft-type game ever made.  It’s an old-school-styled arcade game featuring moose, deer, sheep, camels and other hoofed mammals, based off a classic arcade game that’s been put through so many changes that it’s now something else altogether, featuring simple gameplay that only reveals its hidden depths through experimentation and the occasional hint that’s easy to miss amidst the sheer volume of geometric explosions that can inundate the screen at any one time.  That doesn’t even touch on the audio, which includes a nicely energetic soundtrack plus sound effects torn from sources obvious (Bill & Ted’s Excellent Adventure) or created as tribute to something more obscure (Berzerk).

The basic gameplay is relatively simple.  You’re a moose-like creature, albeit one in a state of high alert rather than in the standard pose of head extended at roughly shoulder height.  The moose travels on one of two planes, one on the ceiling and the other the floor, and can flip between the two with the touch of a button.  The other button is fire, with the shot being a rapid chain of bullets traveling in a thin straight line.  The moose also has full freedom of movement, not only left and right but forward and back.  The level loops quickly, so zipping forward past an enemy will see it respawn in the distance after half a second, and this also means you need to be careful when retreating not to back in to something as it cycles around behind you.  The looping only applies to the moose and enemies, though, with both bullets and power-ups disappearing if you move too far past them. 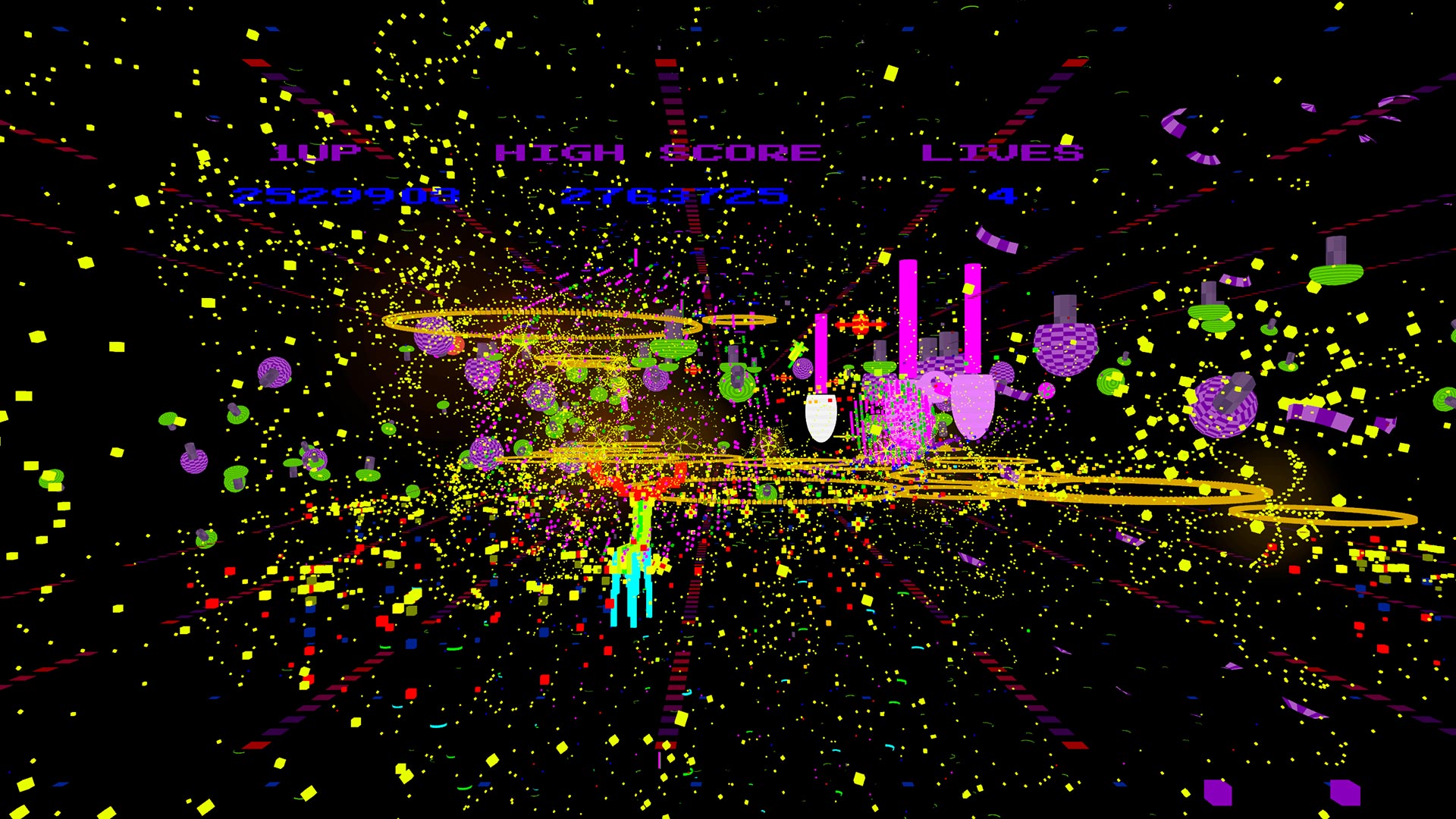 Every once in a while a destroyed enemy drops a pill and collecting it generates one of any number of temporary power-ups.  Various firing patterns, including bullets that turn enemies into deer that frolic harmlessly past; smart-bombs, charging buck stampedes, radial camel charges and even oxsplosions; double-moose mode puts a mirror-moose on the ceiling or floor, moving and shooting with you; helping hirsch (German for “deer”, of course) gives an AI companion that flits about attacking enemies.  Everything stacks, too, so it’s possible to get a rapid-fire splitting cascade of flower-bullets turning the enemy into herds of hopping deer.  That doesn’t happen often, of course, but the occasional power-spike is welcome when a series of levels has slowly whittled down the life-stock.

Each level is hand-crafted to the point you can expect certain waves and power-ups to appear at predefined points but also random enough that there’s no memorizing a movement pattern through.  While the wave style is set the movement of the enemies isn’t, so there’s a whole lot of reflex required once the screen starts getting crowded.  Fortunately Moose Life is generous with its power-ups, plus each level has a purple sphere that contain sheep inside.  Pop it open with a bullet, collect the sheep and you enter a period of invincibility called purple moose mode.  A timer in the middle of the screen lets you know how long it lasts, while text below that constantly tosses out gameplay hints.  There’s a surprising amount of words on the screen at any given time, in fact, with Moose Life constantly telling you things that are next to impossible to read.  It’s not that anything is unclear, but rather tunnel vision takes over to the point that while the game is trying to let you know what the next pill does or that it’s a good idea to ram through the mushroom fields after getting a Polybius-like boost from the stag gates, it’s hard to remember the information is there.

As is obvious from these screens, there can be a lot going on at any one time.  The thing that may not be so clear is that even when everything kicks off, with enemies shattering and voxel-pattern explosions filling the screen while warping effects cause everything to lightly pulse and shimmer, it’s generally obvious what you need to do.  Bullets and enemies are clear when everything is in motion, and when things get properly insane is usually when you’re safest.  It doesn’t take more than a round or two to start figuring out which bits to pay attention to, and after that the effects and colors become part of the ride rather than anything that might interfere with it.  The visual chaos is only chaotic in still-screens, but this isn’t a puzzle game and nothing stays still.  By the time you get to the really trippy stuff around the mid-30s your eyes will have gotten used to the barrage while anyone watching will wonder how on earth you can see anything.  And it will feel lovely. 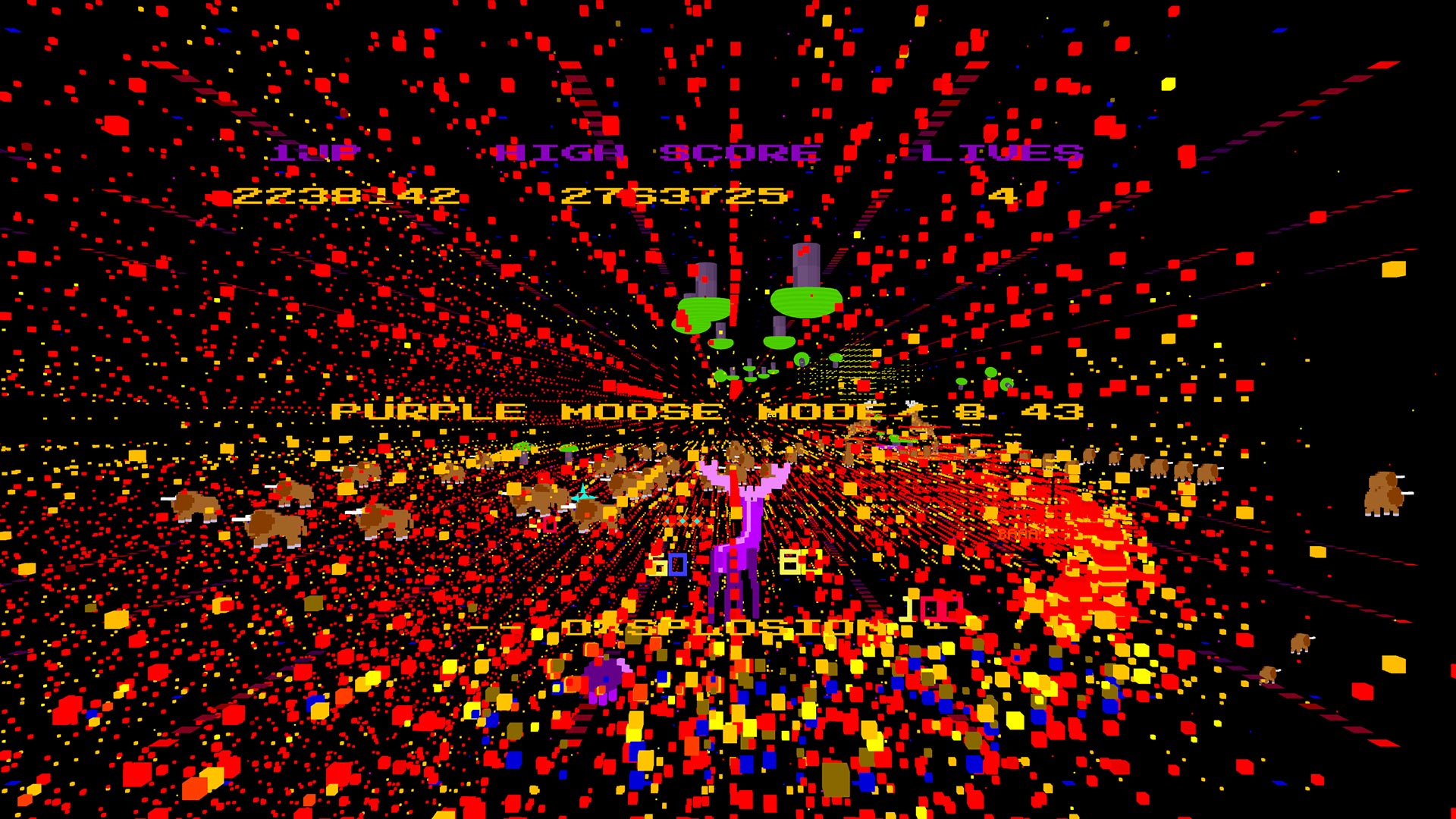 One of the goals of Moose Life was to make a game that felt nice to play and it succeeds incredibly well at doing that.  The moose controls exactly as you’d expect at all times, while a constant flow of various power-ups means there’s almost always some kind of advantage to chase after.  The shooting feels good, enemies shatter in the most satisfying way, sheep and other friendly critters make the levels feel extra lively, and the end of level text is always entertaining.  The game can also be played in VR or out, and while VR works its normal immersive magic, Moose Life works perfectly fine on the flat screen with no loss of playability.  Most importantly, though, Moose Life feels like it wants to bring the player along for the whole ride and even has a scoreless Free Ride mode that doesn’t bother with the life-count.  There’s a good amount of high-score chasing to be done for those who want to ferret out hidden mechanics like creating trippy deer, but even if you just want to dip in and play a few levels, manually selecting one that could have gone better or maybe just has the best soundtrack, Moose Life wants you to come out of it feeling good.  Moose Life is an upbeat hardcore shooter that’s just as inviting to the casual player and a wonderfully-orchestrated fireworks show from start to finish.