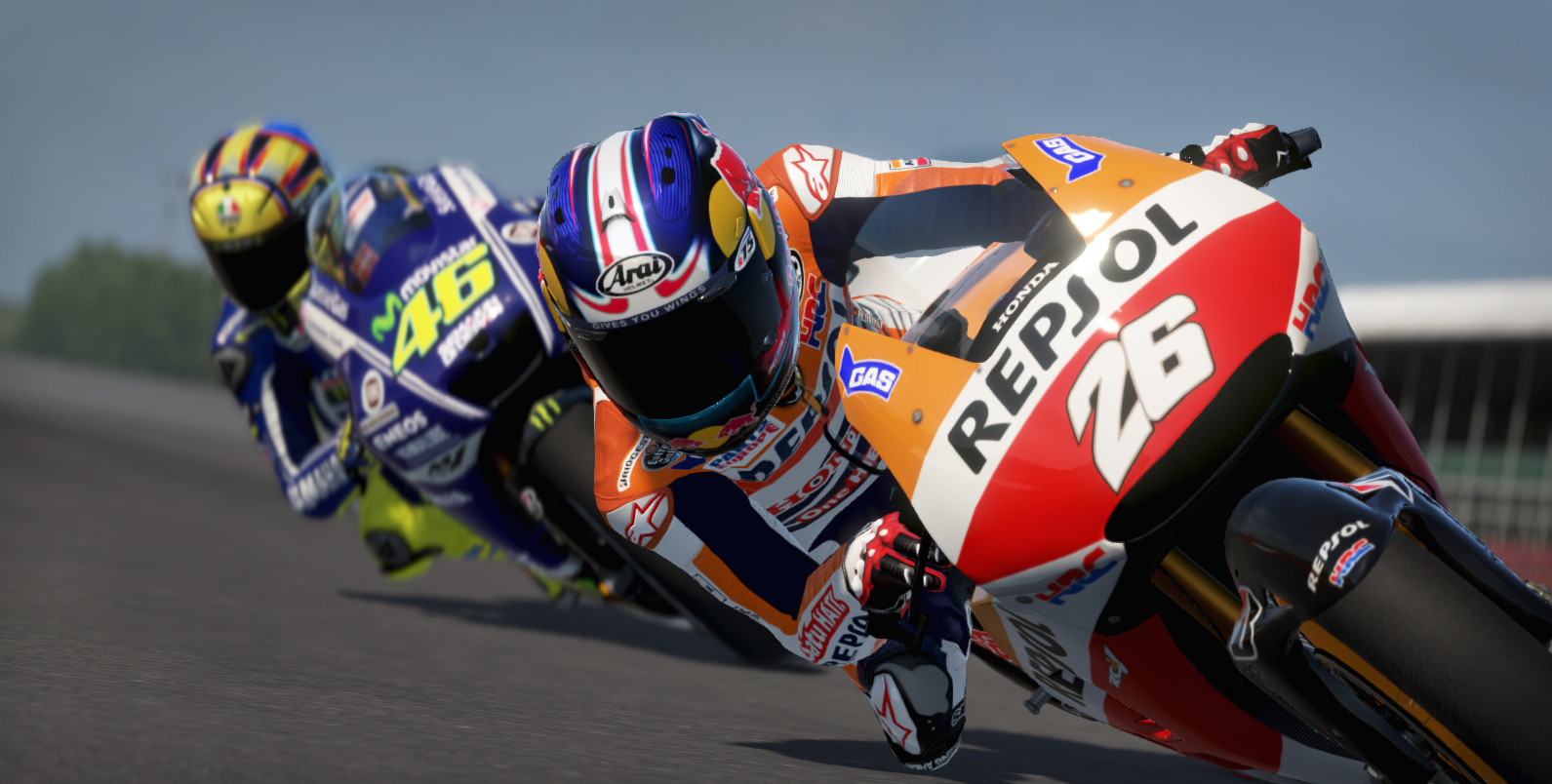 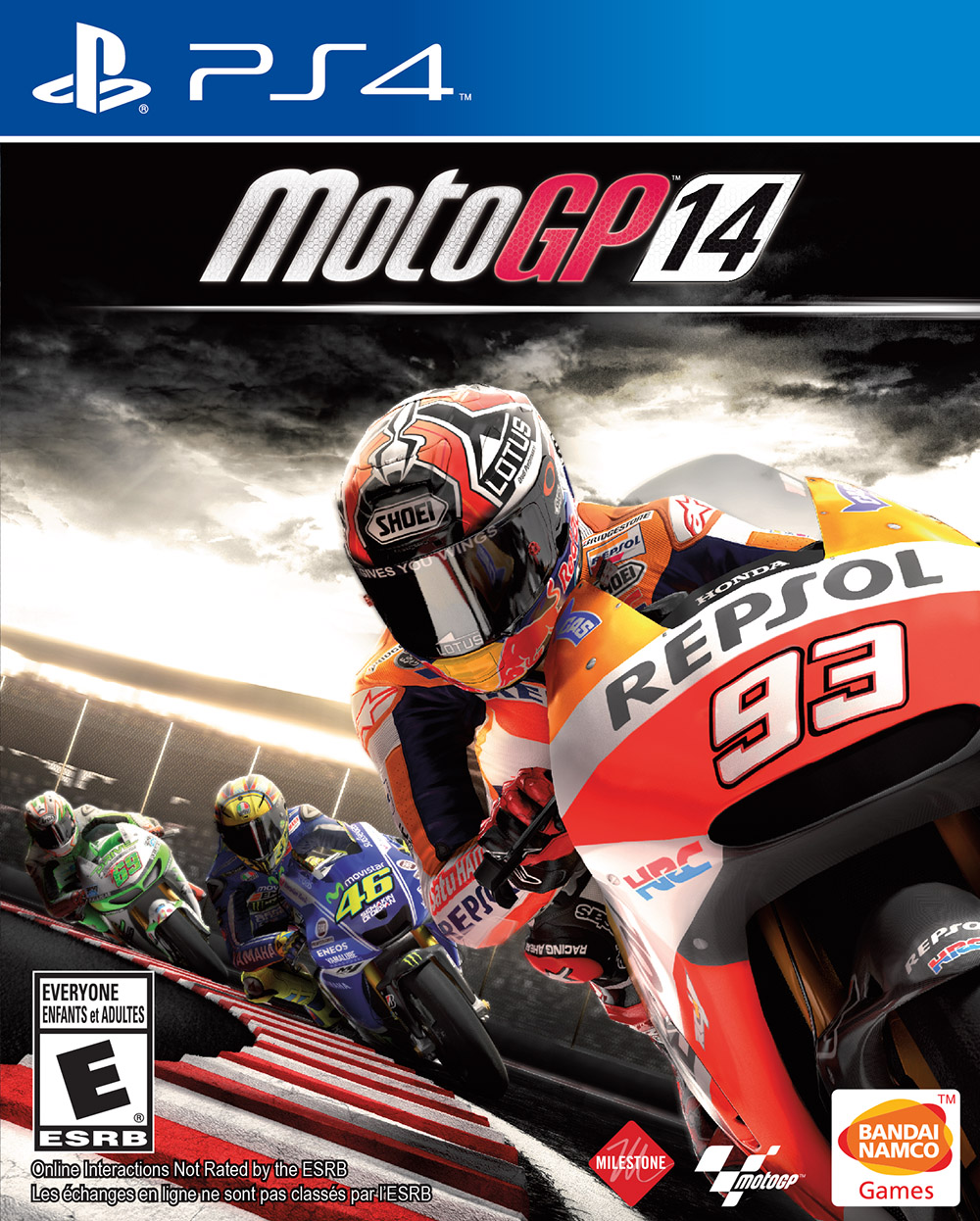 The long-running MotoGP series has finally made its debut on current generation consoles. After years of sub-par visuals, this should be the game that sets things right in that regard while providing the sim-flavored gameplay the series has been known for.  The sim racing seen in MotoGP has always veered to the extreme side of simulation and wasn’t very user-friendly, but more recent entries got closer to finding that sweet spot that the Forza Motorsport series found where you get the intricacy of a sim with a smaller barrier of entry for non-sim fans. With this as the first cross-generational game in the series, it would make sense to start things off right with a killer game. Sadly, that hasn’t quite happened, and the end product doesn’t just amplify existing issues, but brings some new ones to the table as well.

There are three levels of simulation, with one for experts, intermediate players and for beginners. In theory, this should break down the barrier of entry quite a bit, but while there’s a tutorial to give you some no-stakes gameplay, it doesn’t ease you into things. No matter what mode you choose, inexperienced players will be overwhelmed unless they spend time repeating doing races. Milestone’s offered up a few different levels of simulation, but they all require more precision than something like Forza, so be prepared.  Milestone’s games don’t ease you into things quite as well, so you’re better off sticking with using as many assists and the lowest-powered bikes possible to start, along with the pace car to get a feel for how things work without the risk of wiping out.

MotoGP 14 has a lot of mode selection options, with the career mode starting players on a team-based path and Grand Prix offering up easily the most intriguing setup with a large selection of racing options and bike types. Players can pick from a general lineup or choose to face champions from years gone by. Throughout the sport’s history, there have been 250 cc, 500 cc, 600 cc, and 1000 cc bikes and any kind can be focused on here. Like with Mario Kart, the higher the number, the harder it is to control. Novices struggling with the level of precision needed to race well will find starting off low the best way to go. Championship mode is pretty much the same idea, but you’ve got a set listing of 18 tracks to race on and you can choose from real-life drivers or your own character. Real Events 2013 and Challenge the Champions are rooted in history. The former is built around recreating history, with seventeen scenarios presented from last season’s races. The goal is to do the best to recreate things given the parameters, which is something that should please die-hard fans of the sport. Challenge the Champions give you the same pre-set scenario setup, but doesn’t base it on real-life. 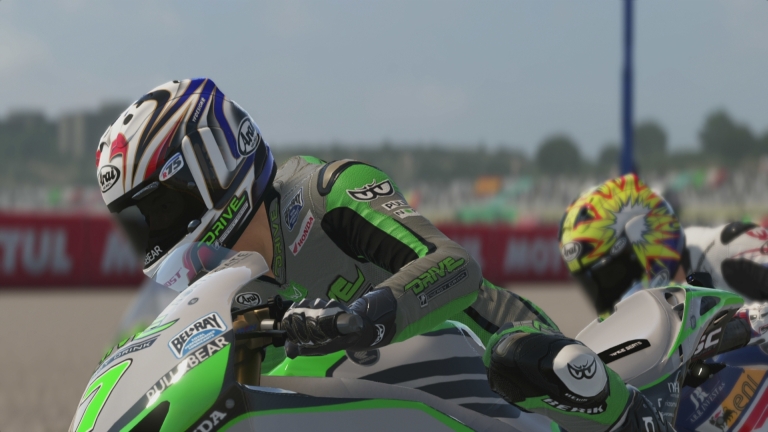 One big problem with all of these options is that there’s too much overlap between them that makes things seem padded out. Championship and Grand Prix are too similar, with the biggest difference being a pre-set playlist of tracks standing between them. Challenge the Champions and Real Events are also too similar, while the career mode stands out, it doesn’t do much to feel like more than just a series of random races. There’s not much of a sense of progression. Luckily, MotoGP 14 does one thing better than any other game when it comes to presentation. Some games do pre-race fly-overs to set the stage for a track and this does that while also showing clips of the area. It’s a small thing, but it gives a glimpse into the area and makes each race at least seem like it’s happening in a different place. 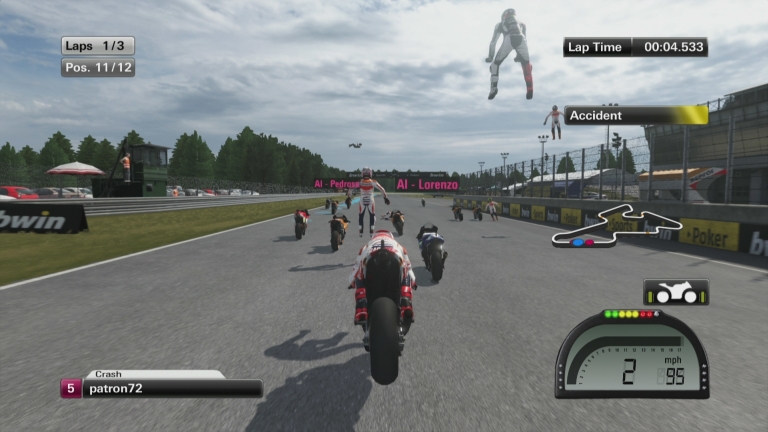 Sadly, beyond a feeling of sameness, the game also suffers from some technical problems. Loading times are unbelievably long to start up and to switch from mode to mode. Given that the game has tons of modes, that will add some worthless play time to things. Navigating through the menus is speedy, though, and they’re well laid-out with large text to read and images thrown in to keep them interesting. Online lets you play with any bike type you want to in a single race, grand prix or championship setup. Sadly, our time with the online setup wasn’t pleasant. While the experience was lag-free, it was full of random teleportation around the track and bizarre things like bikes being ridden without visible drivers, or visible drivers in-mid air riding invisible bikes. It’s a shame issues like this exist, but at least they lead to an entertaining level of bad instead of just being bad.

Visually, MotoGP 14 delivers some reasonably-good graphics in races that don’t shine while playing. Getting knocked off of a bike reveals a canned and fake-looking spinning animation, but the lean-in animations are subtle. It’s a strange mix of good and bad elements, and it just makes it seem like they cut corners in development whenever possible. The environments look good, but will never amaze you. To the game’s credit, there is absolutely no slowdown despite a ton of racers being on-screen at once, which leads to some dazzling replay angles.  The camera around at will and after a few seconds, all of the on-screen graphics leave the screen leaving only a stunning image. These are about the only times the game seems to live up to its current-gen potential, sadly. While nothing looks horrible, when you see a game like Driveclub on the market, you see what can be done with racing games on the hardware, and this doesn’t max it out. MotoGP 14 disappoints in a lot of ways, but delivers a good experience for the ears. The menu music is slow and beautiful, and while it’s absent in races, sound design is satisfying. Engine roars explode from speakers and bring a sense of fury to the action. When you’re in a crowded field, the engine noises hype you up. 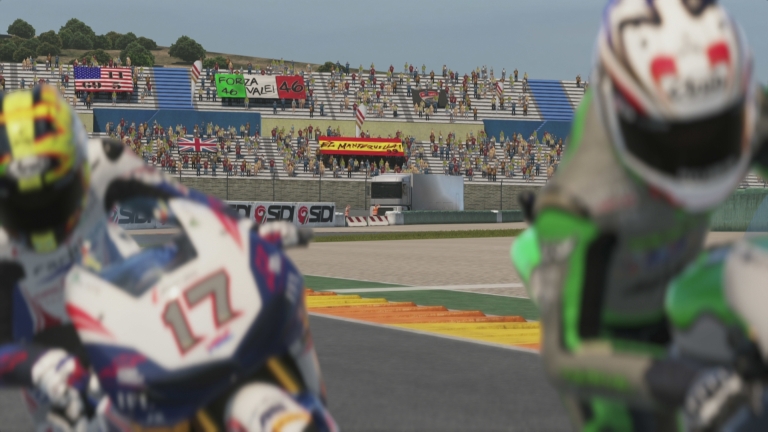 MotoGP 14 can be safely avoided by all by the most die-hard fans of the series. While it features an impressive variety of modes, they each share a lot of the same properties, so they don’t feel very different. The sim-heavy gameplay isn’t very user-friendly and even having a few different options for racing difficulty, sim level, multiple bike power types and tutorials showing you what to do doesn’t make it “fun.” This issue has crippled past entries and remains one now. Outside of replays, it also doesn’t make much use of current-generation hardware to craft impressive graphics, although the sound design is strong. Online is buggy, but amusingly so. It’s hard to recommend MotoGP 14 to anybody but fans of the series curious to see how it shapes up on newer hardware.