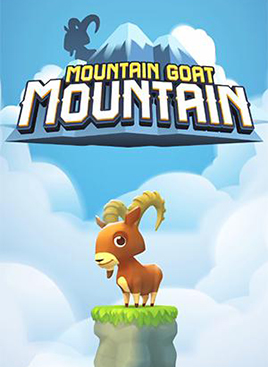 Goats got mountains, mountains got goats.  Like peanut butter and chocolate, or game trailers and dubstep, the two are thematically inseparable.  Mountain Goat Mountain explores this relationship by placing you in the hooves of a cute little goat that just wants to eat all the grass and scale an endless mountain of cubes.  The mountain, on the other hand, seems to want the goat dead.  One side of this relationship is clearly not as into it as the other, but the goat won’t be deterred by falling logs, bottomless chasms, crumbling platforms and stray bolts of lightning.  It’s a determined little goat and scaling the mountain is its dream.

Mountain Goat Mountain is a simple arcade game ported from mobile, and while it’s fairly basic it’s also cute, charming, and good fun despite some rough edges in the translation to VR.  The goat starts at the base of the mountain and hops one block at a time.  Point the goat in the direction you want to go, hit the A button, and it jumps towards the next cube.  The jump has a standard range of one cube forward and one cube high, although in certain circumstances it can clear two or more at once.  It’s a little awkward at first, hitting a button to move rather than just Frogger-ing your way through, but seeing as you move on the diagonal it helps avoid a misdirected jump.  After a minute you’re clearing dozens of cubes in a few seconds, scaling the mountain and keeping an eye out for helpful pickups along the way.

The goat is after three things- grass, coins, and the semi-scarce invulnerability shield.  Go without grass long enough and the goat keels over from starvation, collect coins to buy new goats between one game and the next, and use the invulnerability shield to not only ignore the hazards bouncing down the mountain but also get a super-hop that can clear any gap or jump.  Grass is common enough that the only time the goat is in danger of starving is when you sit and think about a particular puzzle a little too long, and coins are scattered all over the mountainside.  Both resources are abundant enough that you’ll actually leave plenty behind, because the only goal is height and while it’s nice to get every coin you see it’s also not very practical.  They don’t add to score and they don’t keep you alive, so in violation of the gaming conventions of every platformer ever, you end up abandoning a collectible if it looks even slightly impractical to retrieve.  Besides, it’s better to quickly trek up to the higher and more profitable heights of the mountain where shields and treasure chests (holding five coins apiece) are more common. 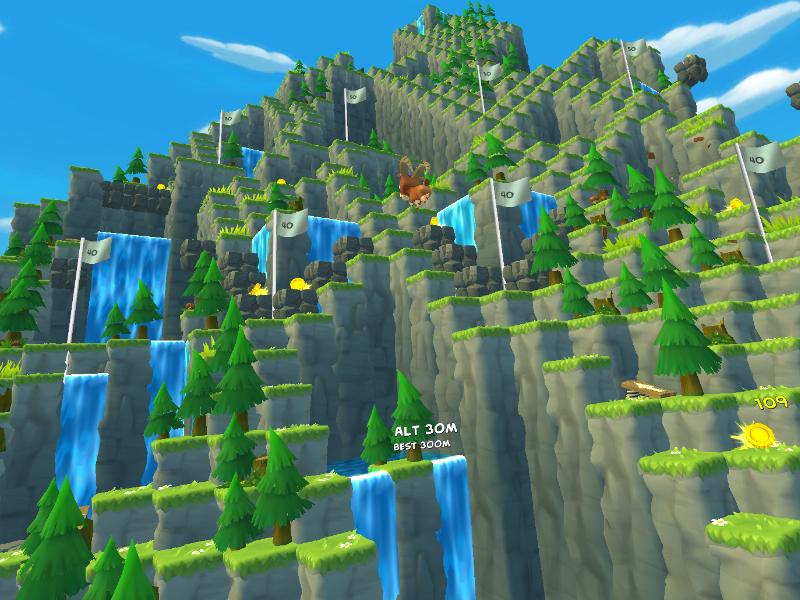 While gold coins don’t do much towards survival, they do let you buy new goats to play as.  More than just a goat in a fancy hat, the new skins also re-asset the mountain as well.  Rainy Goat gets a grey day with thunder and drizzle, Dubstep and VR Goats go full-on neon techno, etc.  There are a lot of goats to buy and, while many of them share level assets, there are enough unique designs that it’s always fun to buy a new goat and see how it changes the mountain.

A major point in Mountain Goat Mountain‘s favor, in fact, is that while the game is freemium it doesn’t use this as an excuse to sell coins.  The game is 100% free but ad supported, without a microtransaction to be found.  The advertising isn’t an ignorable and pointless banner ad, or “Watch this Youtube link for a reward!”, but rather a new level themed on the game’s sponsor, which at the time of this writing is an insurance company.  The sponsor-based level only pops up once a day, which makes sense seeing as almost every cube has a coin on it, and the game limits access in order to not break its economy.  So yes, the level is an ad, but it’s one that acts as a gameplay reward and is unobtrusive enough that it would take a very strong level of intolerance for it to be a problem.

Which isn’t to say Mountain Goat Mountain doesn’t have its issues, of course.  The port from mobile isn’t a particularly thorough one, and I’m not honestly sure why the game is VR-only.  It’s nice to see a shield then look around for the nearest treasure chest, plotting a course to make the brief invulnerability and extra jumping power pay off in coins, but it doesn’t redefine the game in any way.  The addition of VR actually breaks aspects of the presentation.  Looking down it’s obvious that each cube only has three sides rendered, with the rear polygons that would remain hidden on a fixed camera now revealed to be not there at all. The mountain itself also looks wrong when you can turn left or right, with the sides showing that the play field is tilted forward to improve the viewing angle when looking forward.  On mobile this would have been undetectable but the new platform brings the ability to look around, which is one of VR’s main selling points, and Mountain Goat Mountain doesn’t feel like it received a moment’s worth of polish to get it ready for this.  Or any polish for the PC platform, for that matter.  There’s no pause feature at all and the only way to exit is to take off your headset and close the game manually.  Mountain Goat Mountain runs smoothly, boots fast, and I’ve never seen it crash, but calling the port “bare bones” would imply that it’s got a full skeletal structure. 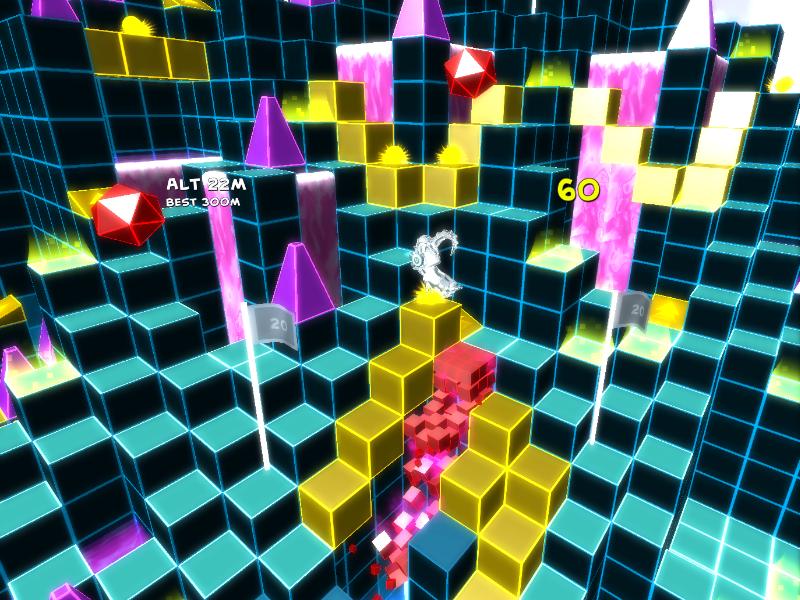 While the port may be rough, Mountain Goat Mountain is honestly a great little arcade-style action platformer.  Jump up the hill, avoid the obstacles, figure out quickly which items you want to go for and which aren’t practical to collect, and try not to get caught on a disintegrating platform.  The solid, safe ground of the lower sections gets steadily more complicated and treacherous as you climb, with more traps and difficult areas filled with tempting coins to chase after.  Hitting any hazard is an instant death, but you can restart in seconds and getting back to the tricky areas only takes a minute.  Mountain Goat Mountain is a simple and accessible game that’s easy to drop into for a quick hit of gaming, and a wonderfully replayable combination of cute, fun and challenging.