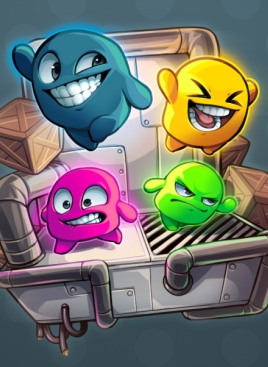 Several of the best video games over the past several years can have their success summed up in one sentence: “genius in its simplicity.” This goes heavily for a lot of indie and multiplayer games, with titles such as Rocket League and Runbow being notable examples. Of course, the recent trend towards more smaller games with a focus on local multiplayer helps as well. The latest notable entry into the pool of games suitable for parties is Move or Die, which bills itself as “The Friendship Ruining Game.” Clearly, there has been no better sign of what could wind up as one of 2016’s greatest multiplayer games.

Move or Die’s title isn’t just a saying, it makes up the game’s core gameplay mechanic. You control one of four little blob-ish characters, and every time you aren’t moving or aren’t touching the floor, your health drains rapidly. Run around, and it regenerates. This sets the stage for a whole slew of 2D platforming-based arena games consisting of various goals such as coloring the most tiles on the floor and walls, attempting to be the last one standing while dodging falling blocks, or inflating yourself and trying to knock enemies back into deadly hazards, among several other gleeful competitions where everyone runs around like a pack of kids on a massive sugar rush (especially in the game that’s actually called Sugar Rush).

How it works is that at the beginning of each game, each one of two to four players selects the mini-games they want to play from a list of what they have available. Once the pool is filled, a random mini-game to play next is selected from said pool after every match. The winner gets the most points, and whoever has the most points at the end (and can win one final match, just to make sure) is the grand champion. Each match only lasts about twenty seconds and entire games are between five and ten minutes, making sure that nothing drags on for too long. The better you do, the more experience points you earn, with new levels dropping random character skins to dress up in and new game modes to personally use when hosting. 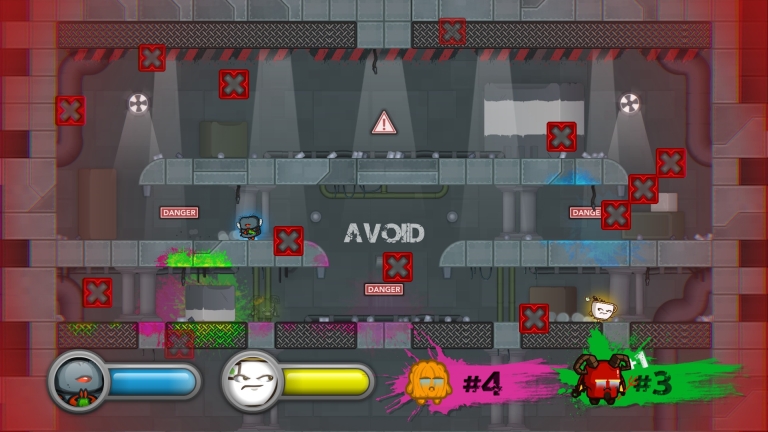 The short length is actually a key to the success of Move or Die, because it ensures that you also end up experiencing a wide variety of gameplay as quickly as possible. It’s like a hefty appetizer platter where you sample different little tastes over and over, and what you’re being offered is just delicious. I know that sounds a bit corny, but I can’t help it, this game is just so damn fun. Each mini-game is an absolutely frantic blast to play, and easy to figure out while requiring quick reflexes at all times. And you need only the arrow keys on your keyboard to play, with the platforming controlling perfectly, being terrific and responsive. It says a lot that the game’s setup can deliver a superb experience which you can actually operate with one hand tied behind your back.

Move or Die looks and sounds incredible as well, with the graphics being a bit minimalist, yet nice and vivid. Splatters of color punctuate each area both literally and figuratively, with bits of dead contestants and fresh meat running around in charming little costumes like devils and walking bullets. The characters themselves are also expressive before and after each match, displaying cute little emotions of envy, superiority or utter humiliation on their faces. The tunes are also perfectly fast, jazzy, and uptempo, with comparisons to Runbow’s music immediately coming to mind. A little more variety would be nice, but it still works quite well.

The only real nitpick I have in Move or Die is the one mini-game that came off as a dud: Speed Run. The goal is to simply run from one end of an obstacle course to the other, but compared to all of the other games that have different layouts or some elements of randomness, Speed Run only has the one course. It basically comes down to who ever can hold down the right arrow key the longest and jump at the right time. It an otherwise flawless appetizer platter, Speed Run is the plain nacho chips. 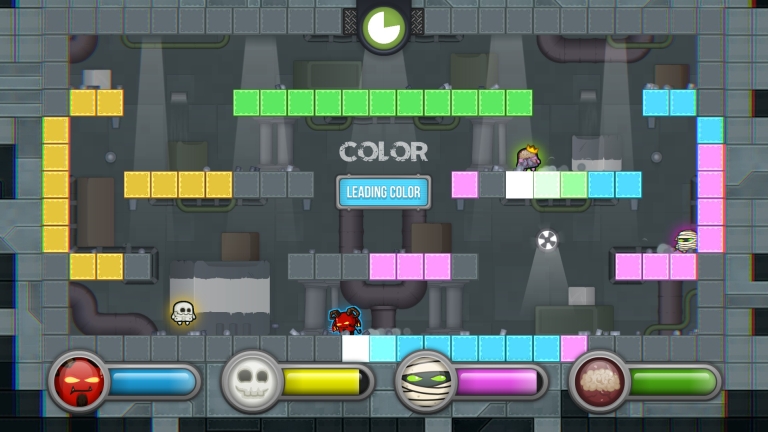 While its true potential is unlocked when you have three friends to play it with (heck, one of the game’s achievements actually rewards you for hosting a LAN party), Move or Die is an absolute blast and quite possibly one of the best party games on Steam. And with the developers promising more game modes and skins on the way to be mixed in with the current crop, there are even more reasons to keep playing it over and over. Move or Die is a perfect example of genius in its simplicity. Genius that involves blasting a sentient teacup in the head with a sniper rifle, but genius nonetheless.