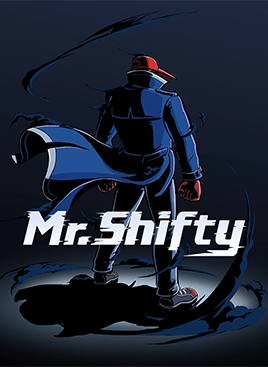 It’s always nice to find a game that borrows (or outright takes) structural/mechanical similarities from those [often-lauded] titles you simply couldn’t “get” and offers something that you can warm to instantly. Bloodborne, Life is Strange, Breath of the Wild, Seraph — the past couple of years alone, for all the many iterations, keeping to one’s established formula and mere refusal to evolve a given genre’s rule-set, there are those games that are able (willing more importantly) to perhaps seek out those of us put off by a preconceived idea, convincing us that there’s more to production than mere replication. Throughout my brief (perhaps a little too brief) time with Team Shifty’s debut title, Mr. Shifty, I began to share the same kind of immediate exhilaration and genuine pleasure I can only assume someone else may have found with a title like Hotline Miami. Its twitchy, fast-thinking, somewhat-brutal approach to both player mortality and punishment, here fused with the kind of stylish tactile mind-set you’d likely catch in a A-team led PlatinumGames offering.

From personal recollect, Mr. Shifty is indeed to Hotline Miami what Bloodborne was to Dark Souls: an attempt to freshen up established formulae that, though initially proving popular, had unfortunately alienated pockets of the wider community that may or may not seen past the initial promise of its gameplay. While Mr. Shifty‘s sense of story or writing is barely present within its overall run-time — which, it might shock you to hear, would take even those not intentionally focused on speed-running or even rushing through its eighteen total stages, around three hours to see the credits screens begin to scroll — its gameplay is, in those rarest of instances, the type of influenced-by game that holds enough of a unique identity to come off more like an evolved “successor” of sorts.

It takes very little time for players to learn and eventually get to grips with the mechanics on show in Mr. Shifty; a cape-crusader of sorts whom has the ability to teleport (though not to the point of hectic spamming; the player given five taps of a button, regenerating at a steady pace, punishing those keen to simply mash away without some level of strategic thought) around a room and even through walls. The aim, as it becomes the norm in many of its closed-off rooms, to beat up each and everyone of the faceless, character-devoid goons that not only comprise the game’s only real means of antagonists here, but also bring about the hidden variety of methods the player needs to eventually adapt to in order to stay alive. Get hit just once, be it via bullets or in some cases through a melee attack, and players are required to start a section (but not the entire stage) again. But given how lengthy — or rather the number of goons that are flung at players — particular segments can get, as players gradually close in on the game’s climax, the enduring nature of its gameplay only increases. 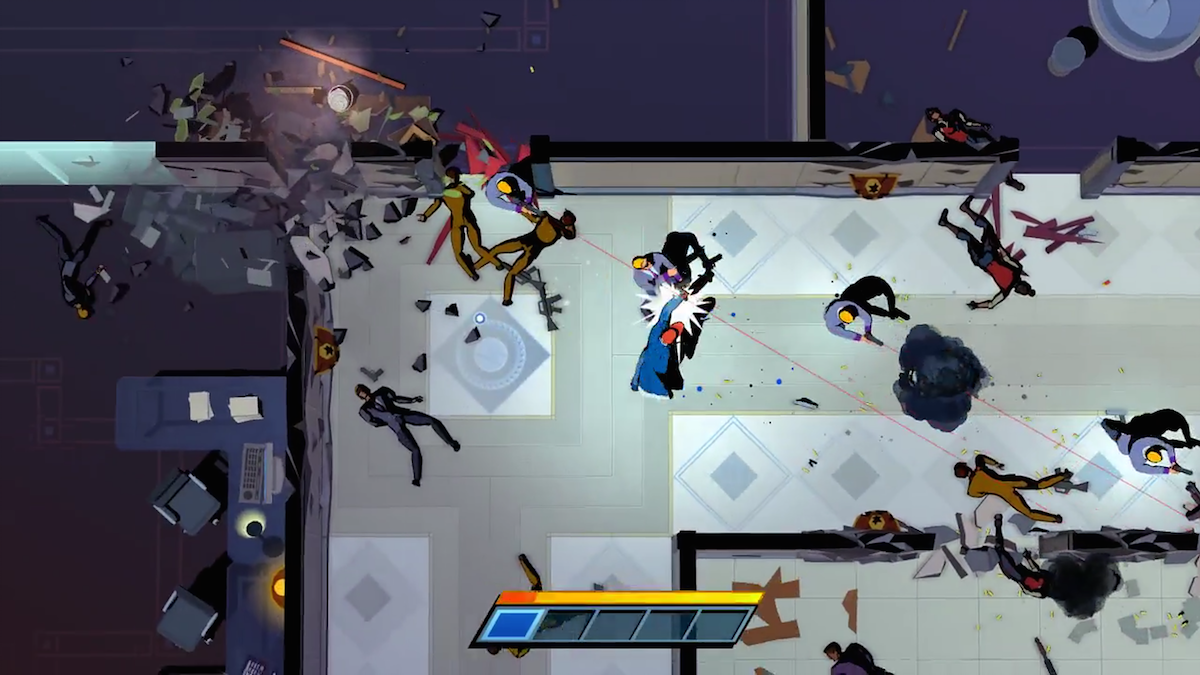 Fortunately the potentially cumbersome set-pieces here are countered with a game that continuously throws up different tasks to phase one’s way through. Tasks that, while don’t vary that much aesthetically and often rely on the restrictive nature of its usually-oblong rooms and right-angled corridors, demand an even more acute level of focus. As it becomes even more clear in latter stages where upon a wide variety of enemy-types — from fist-flying brutes to RPG users to those wielding any one of an assortment of automatic weaponry — it’s easy to get lost in the madness unfolding and ultimately make a mistake but it’s this very specific player-made frustration that garners Mr. Shifty‘s highest of plaudits. Even the blatant simplicity of its set-up actually works in its favour at points; further illustrating the silliness and overly-hyper-violent nature of its premise as a once bare room is quickly littered with hundreds of dead bodies and shattered debris alike.

This isn’t without a slight cost to its technical performance though with the ocassional dip in frame-rate, though Mr. Shifty for the most part retains its heightened sense of pace and wit with a game that (on PC) seldom loses its footing. Though it’s unfortunate that some of the more interesting inclusions — the seemingly-random “shifting” of enemies/walls/hazardous objects, all the while avoiding such things as lasers or the many explosions going off all around you — are introduced nearer to the game’s end, players during the first half rarely having their knowledge and their skills tested to a sufficiently demanding level. Only seeing their death count rack up to any meaningful amount once they get closer to the top of the tower that stands as the game’s finale. I say finale; the rather abrupt and anti-climatic cue of the credits isn’t the most just or rewarding end segment you’ll come across and it’s parts like this that add a certain degree of detraction in the game’s rampant simplicity. 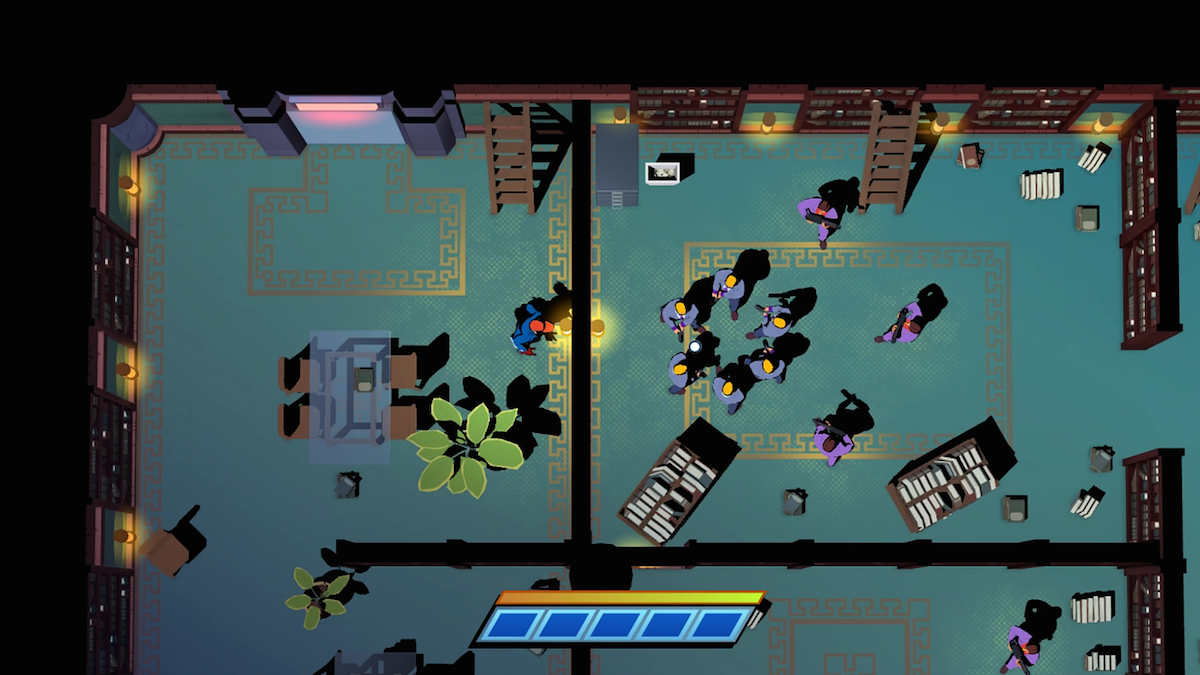 That said, the simplicity in its combat — confined to but a mere three-hit combo of punches alongside the signature shifting ability — doesn’t equate to the same level of disappointment and Mr Shifty’s staying power, naturally, stems from how easy the mechanics are to control, but at the same time are accompanied with a reasonable addition of strategy. Whether you decide to take enemies out one at a time — frantically shifting between open spaces and safe areas surrounded by walls or behind a door — or are a bit more daring and are attempting to get the job done quickly, the minimalist layout may seem to illustrate a lack of design on the developer’s part, but the intertwining of strategy and combat is quick to show itself. Players can also pick up an assortment of items and furniture along the way which deal an addition of damage on top of the standard offered on fists alone — aside from the ocassional over-powered item like the gold trident (only popping up a few times in the game fortunately), quickly breaking after a few uses.

While the open spaces and, at times, lack of cover can initially signal the difficulty curve getting that bit steeper, nothing in Mr. Shifty ever feels unjustly placed or tacked on for the sake of forcefully lengthening the experience. Even if one is to fall at the final hurdle in what is another seemingly-endless wave of goons to beat down — enemies more than happy to shoot at their own men, explosives included, if it means putting the brakes on your progress — nine times out of ten it’s the player who will accept it’s of their own doing and not of the game’s. A crucial point then in how well Team Shifty so cleverly manage to blend in elements of hack-and-slash as well as strategy to keep each and everyone of its clashes fresh but constantly on edge as to how on Earth, put simply, the chaos before you will unfold. 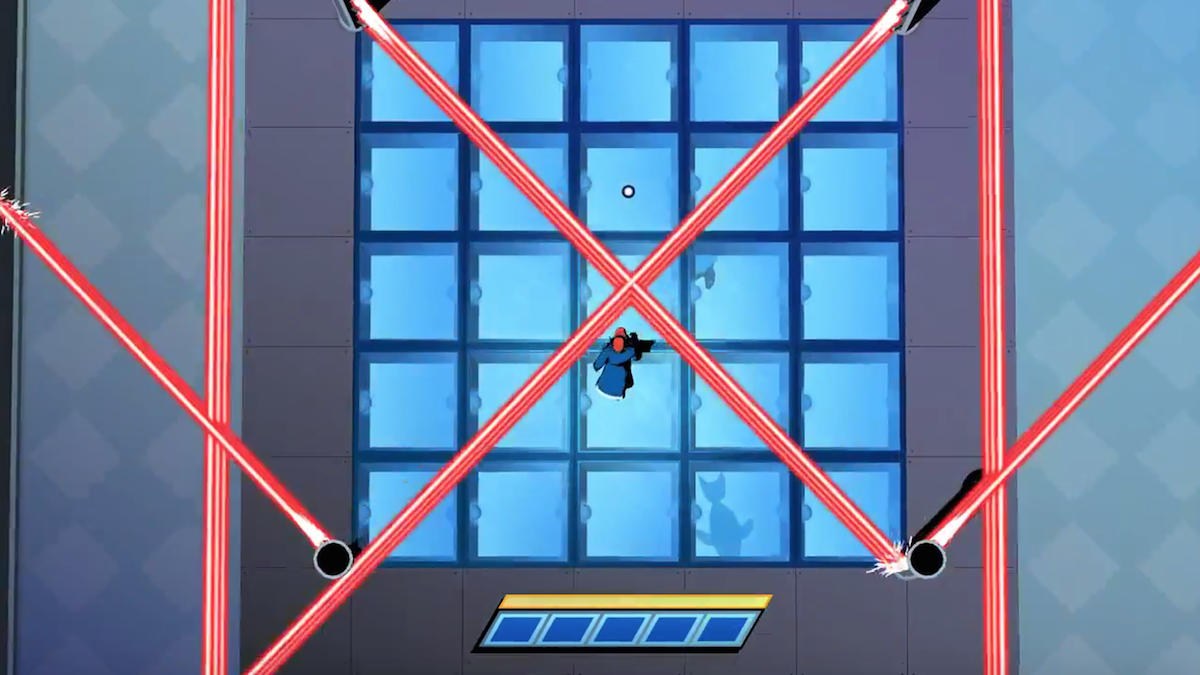 Mr. Shifty knows how to keep you on the edge of your seat yet tentatively conserved all the same. Whether it’s using that last crucial shift or dealing with enemies in a frantic manner, the basic premise masks a surprising strategic depth. While its lack of challenge in the early parts, not to mention the somewhat disappointing length of its total run-time, may feel underwhelming, don’t let the bare, stripped-back design of its environments fool you. There’s plenty of tactical thinking one not just discovers, but ultimately, is required to harness if your intention is to succeed and the way Mr. Shifty manages to balance player involvement with the consequences littering nearly every room traversed through is a prime example of how good gameplay can triumph over anything the on-screen visuals might show. Gameplay might be one of the few, solitary highs it rides, but for the most part, that’s all Mr. Shifty really needs to stand as entertaining, and more importantly, downright fun to tackle.