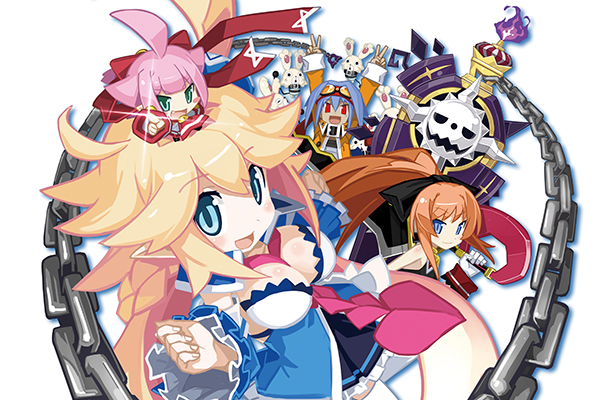 It’s been a while since Chou-Chou rampaged across the Seven Worlds, subduing the lands and converting everything she could get her hands on into peons. The adventure is over and boredom has set in, so what’s an Undisputed God to do but set off looking for new lands to peon-ify? Mugen Souls Z picks up shortly after the end of the first game, and Chou-Chou and her crew have their eyes set on new territory and new adventure in the diverse lands of the Twelve Worlds.

It wouldn’t be any fun if things didn’t go completely wrong, though. After scattering her followers among the worlds in a contest to see who can conquer their territory first, Chou-Chou loses her powers to the divinity-sucking coffin that one of the Twelve Worlds’ Ulimtate Gods drags around with her. Syrma has just awoken after a very long sleep, instantly meets up with the hero Nao, and then crosses paths with Chou-Chou. Pretty soon Chou-Chou is a tiny little chibi version of herself, riding around on Syrma’s head giving orders, and meeting friends old and new in an attempt to get her world-peon-ing job back on track. It’s a bit of a mess, but unquestionably a lively one. 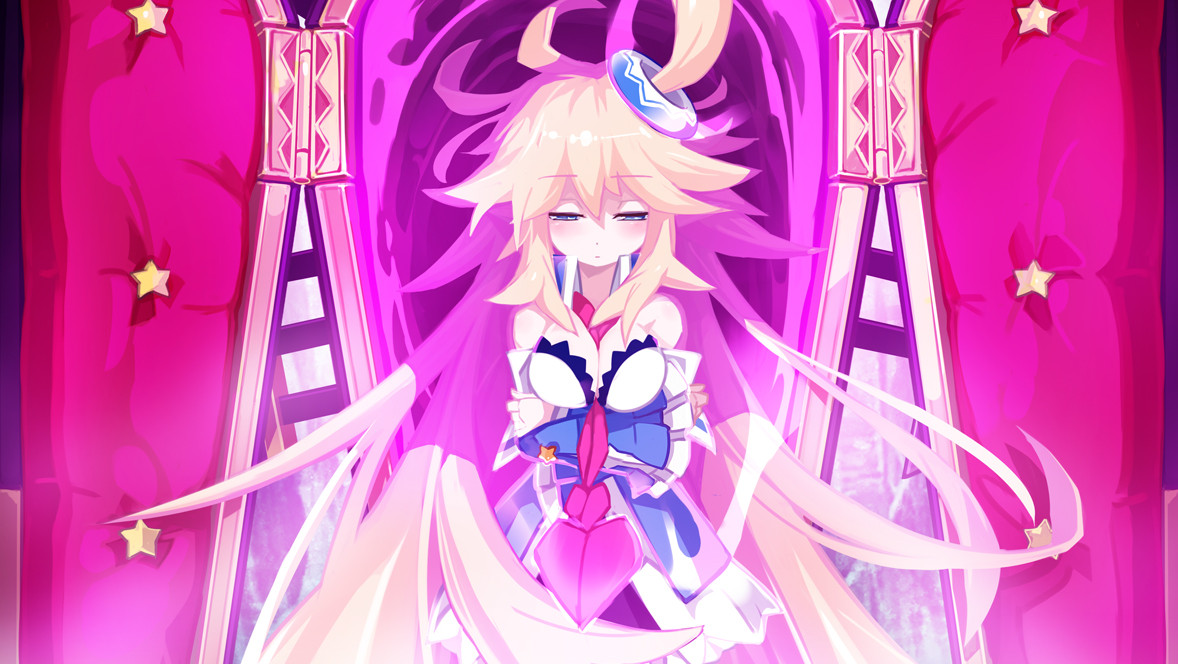 Amidst all the chaos and characters is a semi-standard turn-based RPG that plays pretty much how you’d expect one to. You wander each world going from point to point to activate story segments, and between you and advancement are a whole lot of monsters. They roam the field and you can choose to engage or run away, and once in battle your party members and the monsters take turns with the order decided on the individual’s speed. Attack and magic are well represented, but Syrma’s Captivate ability tends to rule the battlefield. You can take out monsters by beating them down in the standard fashion, of course, but using Captivate not only earns full exp but also changes them into peons or items. Items are nice but peons are essential, because they’re used to power up the G-Castle.

The G-Castle is home base, and in addition to being where you go between one excursion into the Twelve Worlds and the next, it’s also a transforming battle robot. More peons = more power, and different enemies transform into different peons that affect different stats. In theory this means you’ll be carefully scouting out enemies and repeating battles with the ones you need, but in practice it’s just easier to have a couple characters clean up the monsters on the edges of the battlefield while Syrma heads for the biggest monster cluster in order to try to transform as many as possible at once. The enemy may be in a mood, though, so Syrma may have to change into one of Chou-Chou’s aspects. A happy enemy may respond better to the Hyper aspect, for example, while a gloomy one might be more susceptible to Bipolar. It takes a bit of experimentation, but seeing as Syrma can transform once per turn and with a bit of leveling up the damage enemies give is easily healed away, this frequently means battles are a matter of having everyone but Syrma defend for the last turn or two. 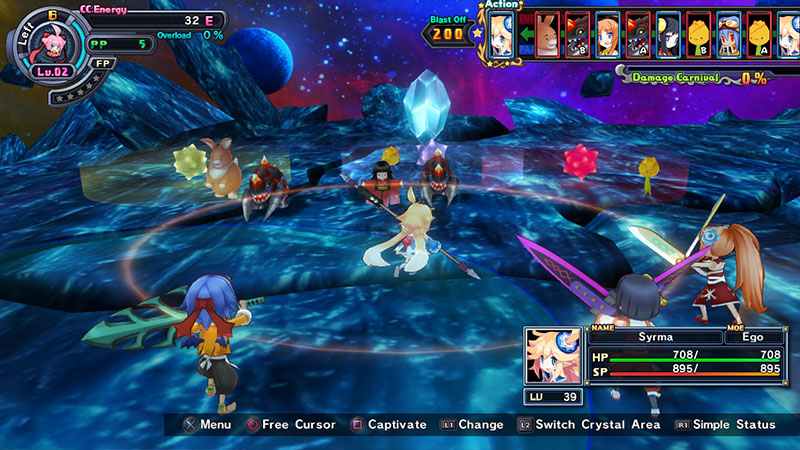 Like a lot of systems in Mugen Souls Z, it means well but has unintended consequences. Take clothing, for example. You can buy and outfit your characters with a variety of clothing options, and while it’s fun to give them new outfits each article also has stat bonuses on level up. One the one hand it makes for some nice strategy in figuring out which character will specialize in what abilities, but I found myself ignoring the bonuses because the outfits that went in the direction I wanted the character to go looked ridiculous rather than cute. Another questionable system is the Peon Salon, where you can create a character from the peon ranks to take into battle, leveling them up to your heart’s content. Like just about every game that’s ever offered this (Final Fantasy Tactics on PS1, I’m thinking of you!), the number of named characters you get through the adventure is large enough that there’s not a lot of point in exploring the system’s possibilities. It’s nice that the option is there, but anyone you can make is easily overshadowed by Mugen Souls Z‘s energetic cast.

Rambunctious as they may be, the story and its characters aren’t particularly deep. There’s a giant cast running around but everyone’s some form of anime cliché, which isn’t that big a deal until you’ve had to sit through 90 minutes of cut-scene interspersed with maybe 10 minutes of actually getting to play in order to start the game. Once things settle down a bit and the gameplay starts happening it’s not so bad, but story bits can easily top ten minutes as the game goes on, and the characters are only as interesting as their schtick. It can be cute and fun (and highly pandering with the fan-service, frequently heading a bit too far into pedo territory) when properly paced, but the game usually doles it out in giant-size economy chunks. Mugen Souls Z is not a game that knows when to shut up. 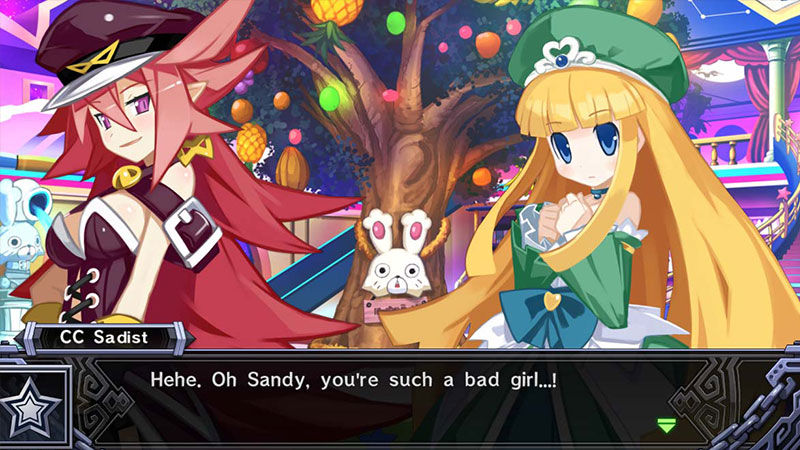 It’s hard to be mean to Mugen Souls Z, because despite some questionable design (and terrible frame-rate), it tries really hard to be likeable. The story is cute and silly just often enough to justify the bits where it’s rattling on endlessly, the characters get in a few good lines now and then to counterbalance their cookie-cutter personalities, and the battle system is actually decent when you stop focusing on Syrma’s Captivate skill. There’s so many systems and sub-systems that describing them would easily triple the length of this review (weapon enhancement and upgrading, Mugen Field, the Ultimate Soul attack, G-Castle battles, etc), none overly complicated but together requiring an in-game “Overwhelming Tutorial.” Mugen Souls Z isn’t a great RPG, but it’s an entertaining one, and there’s enough meat on its bones to keep you playing for a good long while.