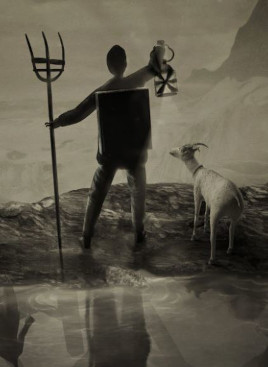 Without getting too much into the history of the various mergers of Swiss municipalities, Mundaun is an actual location in the western part of Switzerland. Most of the land is devoted to agricultural purposes with the majority of the remainder being forested areas. The region itself is relatively small, encompassing roughly three and half square miles with a population of around 300 based on 2014 census data. In other words, it sounds like a sparsely populated region with less than five percent of the land developed into buildings and roadways. This location seems like a good place to set an adventure horror and that’s exactly what Mundaun is.

Mundaun begins with protagonist Curdin traveling to Mundaun. Curdin received a letter from a priest that his grandfather died in a barn fire. This is Curdin’s first return to Mundaun since childhood but it doesn’t take long for him to realize something is amiss. The letter states his grandfather would be buried by the time he reaches Mundaun but the charred remains of his grandfather are found in what’s left of his barn. While trying to make sense of this Curdin has a vision of a man watching the barn burn, taking no other action besides painting the flames consuming the structure. Curdin decides to investigate matters further, only to learn about some dark folklore of the region may have some truth behind it.

As Curdin explores Mundaun the lines between we what we call reality and the supernatural begin to blur. Visions of the past become semi-regular occurrences, gradually unraveling some of the mysterious circumstances surrounding the fire and loss of his grandfather. Trying to make sense of these visions often lead to more questions than answers, but things in the real world start to change in ways that we would consider supernatural. Early on in the adventure what happens in these visions has an affect on modern day events with no logical explanation for what’s going on, but part of the charm of Mundaun is trying to explore and figure out the link that connects everything. 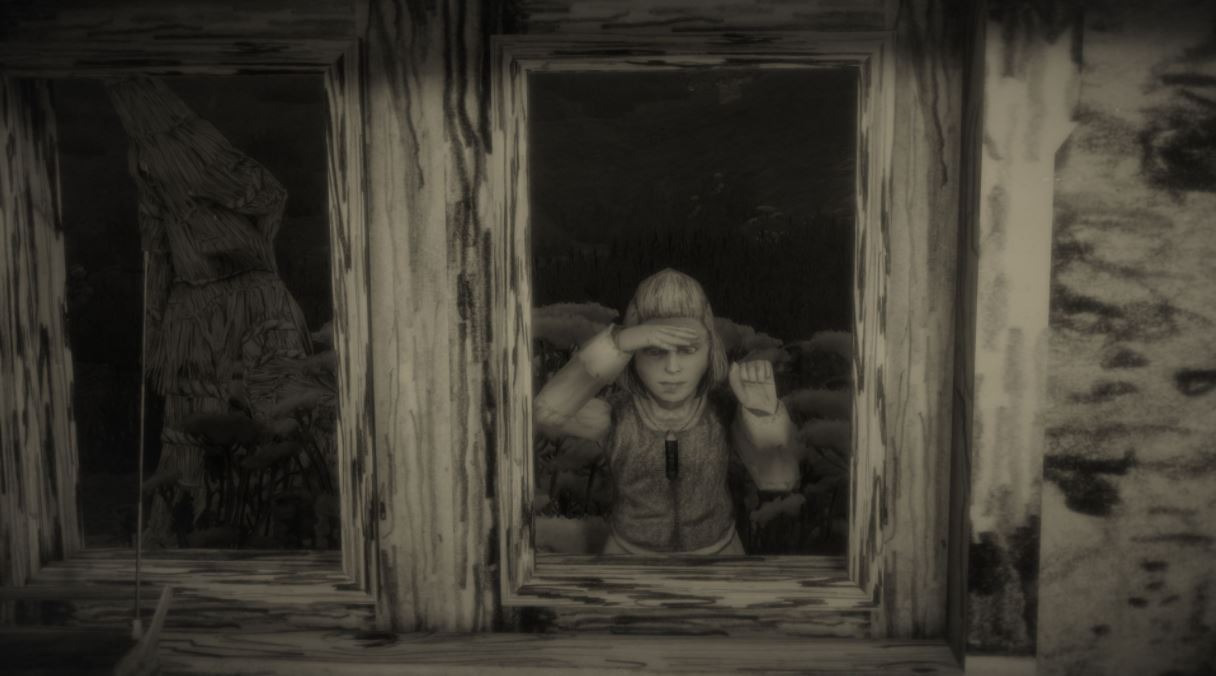 One thing about Mundaun that may either be refreshing or off-putting, depending on your gaming history, is that there’s a large emphasis on exploration. There isn’t a mini map checkered with waypoints and quest markers, and you can forget about a breadcrumb trail or other GPS like guidance system. There are crude street signs that point Curdin in the proper direction, but it’s ultimately up to the player to learn the lay of the land for themselves and figure out where to go. There’s guidance in the form of journal entries taken from Curdin’s observations or gifts given by NPCs, but this is not a game to hold the player’s hand. This can lead to both some frustration but also for a greater feeling of satisfaction when a puzzle is solved. An early mystery that exemplifies this is getting into the seemingly inaccessible graveyard, but after finding the right NPC and given the proper clue, access is easily granted. Crafting items is done in a similar fashion to old CRPGs. To make coffee for example, Curdin needs to fill a pot with water from the well, then put it on a stove, add a log to the stove and light it with a match, add the coffee to the hot water and then use a cup to drink it.

Exploration of Mundaun is how Curdin gradually advances the story. The next step can often be found in his journal, which is the only real reliable source of information in Mundaun. It keeps a log of his quests, accumulated stat upgrades and some clues that can guide him to next destination or solve some puzzle. There are also some sketched maps in the journal, and while not quite as helpful as a more traditional map feature this seems like it was a deliberate game design choice to put the player in the shoes of someone trying to solve a mystery in an unfamiliar locale. Watching the story unfold through exploration such as finding old notes and journals, NPC interactions and bizarre visions does weave an interesting tale. There are five possible endings in Mundaun, and unlocking the best ending requires careful attention to the story and making the right choices. It is encouraged for the player to go off the beaten path to search for hidden secrets and upgrades and this also offers some replay value in getting all the different endings. 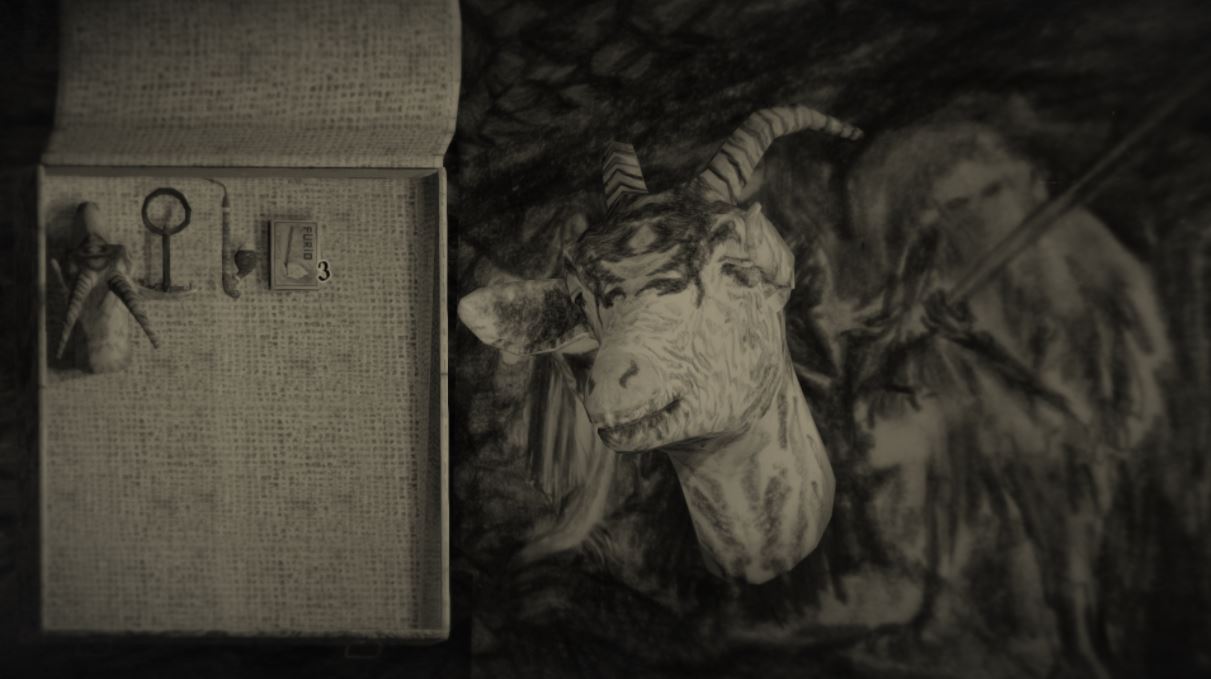 While Curdin’s grandfather may have been a valiant soldier in his younger days, Curdin has lived a less spartan lifestyle and has the frailty to show for it. Curdin is prone to fear whenever enemies close in on him, and his fear has a crippling effect on gameplay where it dramatically decreases his movement, almost freezing him in place. While one normally thinks of alcohol of being liquid courage, coffee is the stimulant that Curdin needs to steel himself against the threat of anthropomorphic haystacks and the other demonic beings that have occupied Mundaun. Each cup of coffee he drinks makes him a little more resistant to the negative effects of fear. While Curdin can face off his enemies in combat with weapons such a pitchfork and World War I era rifle, both of these weapons tend to break easily and ammo is a short supply, making a stealth based approach to battle more recommended. Like his equipment, Curdin can’t stand up to too much punishment from his enemies, and with fear limiting his movement any conflict he can avoid or handle while remaining out of harm’s way is recommended.

While the control mechanics are solid and the minimalist soundtrack adds to the atmosphere, the real technical star of Mundaun is the art style. The graphics are all pencil sketches, which work well in conveying the atmosphere of an old folktale steeped in horror. The art direction gives Mundaun a truly unique look that fits the game perfectly. While a subgenre tag for Mundaun would be horror, it doesn’t rely on jump scares but instead creates an atmosphere of suspense. Playing the game with (what I presume is) Swiss-spoken dialogue with English subtitles actually enhanced the experience, not only giving it a foreign film sort of feel, but also helps with the immersive aspect of being in a foreign land. There’s one word of caution about exploration in that there were a couple times in the review I had to load a save file because Curdin ended up in a place where he could get in but couldn’t get out. 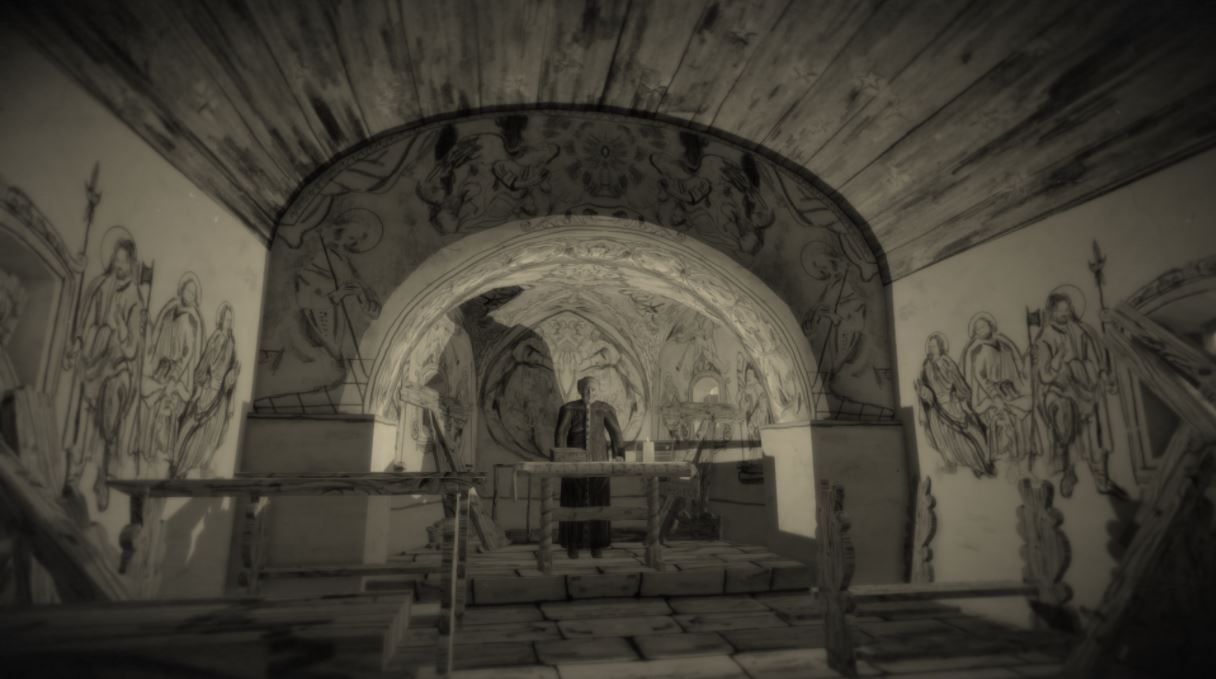 Mundaun succeeds in taking a first-person adventure/horror game in a direction that feels unique. Games inspired by folklore and the blending of the supernatural and natural are nothing new, but Mundaun is able to execute this in an engaging manner through its storytelling and artistic direction. The lack of cluttering up the natural beauty of the game with quest markers and the like enhances the feelings of being alone in a strange land though people accustomed to such things may miss them. Mundaun is a game designed for those who wants to explore an area without their hand being held, and while the objective at hand may not always be clear, eventually finding and solving it does have a greater sense of satisfaction to it. The look and feel of Mundaun’s gameplay is reminiscent of older adventure games while still being relevant to contemporary gaming.