Vanillaware is a studio with an impressive portfolio; gems like GrimGrimoire, Odin Sphere and Grand Knights History all chronicle their past, though much of their staff have been in the industry for much longer than the company’s founding in 2002. Needless to say, the team has a track record of developing great titles; and when they first released Muramasa: The Demon Blade on Wii back in 2009, they upheld that pedigree and delivered yet another hit. Unfortunately, due to most gamers not paying much attention to the Wii by that point, Muramasa wasn’t experienced by as many as it should have been. Moreover, and despite its wonderful art direction, it was held back graphically by the Wii’s technical parameters. Thus, here we are some three years after the original game’s launch, and we’re treated to a HD version of an already wonderful game. In other words, a great, pretty game has only gotten greater and prettier thanks to the Vita.

It’s important to know that Muramasa is an RPG of sorts. Although some may assume that means it emphasizes plot and storytelling conventions, such suppositions would be fairly inaccurate. This is an RPG in its gameplay and customization options, not in its deep, fully fleshed out characters placed in a world that feels alive and worth one’s time. This is actually one of the game’s greatest downfalls, depending on what folks are wanting from the experience. Muramasa tries to give players a tale that is interesting, and at some times it is, but it clearly isn’t highlighted, nor is it ever given the stage to do its thing, and consequently takes a backseat to the gameplay. That being said, what is there can be compelling at times, if for nothing else than the exquisite pacing and overall sense of intrigue it builds through its few introduced mysterious characters.

Essentially, players will choose one of two playable characters and follow their story through to the end. For those that pick the young princess, Momohime, they will find themselves being slain by the evil swordsman, Jinkuro, who was in search of a new body and somewhat by accident ended up getting trapped inside Momohime. He then uses poor Momohime’s body until he can find something stronger. Players who opt for Momohime’s male counterpart, the amnesic Kisuke, will be treated to a narrative that has them scouring Feudal Japan for an evil spirit that has recently reawakened. Again, outside of these premises, the story is never given a chance to make an impact. Thankfully, the localization from Aksys in Rebirth is leaps and bounds better than Ignition’s The Demon Blade, so that makes the story a bit more interesting and tolerable than the first time around. I mean, any game with its heroine spouting off lines like “Stop eye-humping me, you sleazy degenerate. You aren’t fit to mate with a radish, let alone a human being,” is a-OK in my book. Nevertheless, it still stands: RPG-goers looking for a game with profound themes and rich personalities will certainly want to look elsewhere.

For those, however, that like to skip the chit-chat and get down to the sword-flailing business, then Muramasa Rebirth is just what the doctor ordered. The game is essentially broken down into town sections, exploration and platforming portions, random combat encounters and boss battles. All take a 2D, side-scrolling perspective, though it’s the latter two segments that really define the wonderful take-away feeling of Muramasa Rebirth. The bulk of the game’s experience will go down in various combat scenarios. When these random battles go down while trekking from location to location, players will be thrust into a situation where they are surrounded with various enemies. These enemies will usually be on both sides of the player, therefore it takes a clever mind and quick wit to vanquish all of one’s foes without going down in the process. Fortunately, there’s a plethora of moves to unleash upon these poor souls, and it’s ultimately in these combat mechanics that Muramasa shines and shows its purpose. 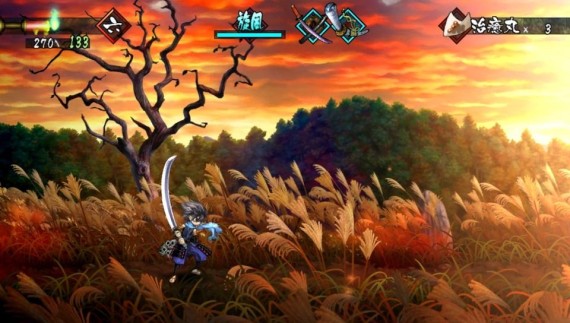 As mentioned, Rebirth is an RPG — an action-RPG no less. So that means the aforesaid battles will occur frequently. When they do, players will be given many ways to dispatch their enemies. For starters, players have 108 swords that they can find, forge and subsequently equip before battle. Each sword has its own unique properties and combat style, thus certain enemies will require the player to understand their swords’ attributes in order to take them out effectively. So there are slow, heavy-hitting swords, nimble yet weaker blades and everything between the two. Each one has a special attack that can be let loose one a meter has been filled by trouncing these baddies, and they can be swapped out on the fly with the simple press of the triangle button. There’s a bit of skill involved in switching weapons, though, as doing so while the blade’s icon at the top of the screen, amidst the rest of the well-laid out HUD, is blinking will unsheathe the next sword perform a screen-clearing, area-of-effect attack the really lays on the pain.

Outside of the wonderful option to choose the right sword for the right enemy, there are the actual attacks from which to choose in order to dispatch assailants. Players can slash to their hearts content while mashing on the attack button to mindlessly string together combos, they can charge up attacks, block, slide attack, deflect thrown shurikens, air dash, and perform plunging sword strikes from a jumping maneuver, along with a few other assaults. Meaning to say, there’s a plethora of ways to take down a foe. Knowing which attack to use is key though, as some enemies won’t fall for the all-too-easy-to-fall-into button mashing, requiring strategic attacks to topple. Thankfully, to pull off something more complicated than hammering on the same button over and over is easy as the controls are super responsive and well-conceived. Moreover, this fairly extensive move list makes for diverse encounters so that each one doesn’t feel just like the last. Of course, even with these different attack types, it can’t wrestle away the notion that Muramasa can feel repetitive after a while. This is a game that is roughly 10 hours long, with each character’s story taking around five hours to complete, and in that time, nine hours will be spent hacking away at dudes. Enemy types are varied enough, but considering how long the segments are where fighting is necessary, it can feel grindy after a while. 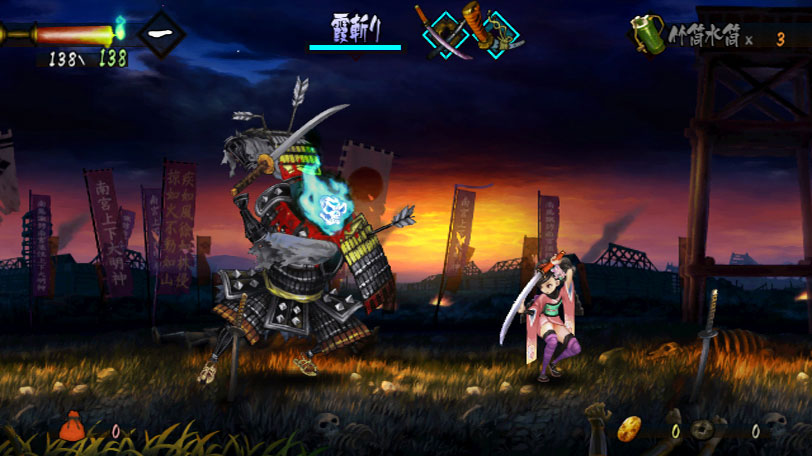 Nevertheless, aside from the battling getting old at times, it’s a really refined system that is exciting and frenetic. It’s action-packed to the core and is set up in a way that makes it difficult to sort of auto-pilot one’s way through the campaigns. That idea is abundantly clear in the wonderful boss battles. This is where Muramasa Rebirth really comes to life. Bosses are usually larger than life, extremely unique in their design and attacks and the feeling of triumph that rushes over you after toppling the biggest one feels distinctly satisfying. Whether it’s a boss or a random enemy, however, the difficulty in Rebirth feels extremely balanced with decently intelligent AI. There are two difficult modes, the hardest of which feeling particularly challenging, encouraging multiple plays.

Talking about Muramasa and not discussing its beautiful presentation would be downright criminal. The truth is Rebirth is the Vita’s best looking game. Yes, it’s 2D, but its art direction and use of color and character style is so strong that it trumps anything else available on the system currently. Hell, it outdoes most games regardless of its console – it’s that unique and strong. It looks like a water-color painting come to life, offset by imaginative, mouth-watering backdrops (that are re-used too often, regrettably) and interesting character designs. Everything is especially vibrant due to the game’s high-definition graphics, which is how the game wanted to be seen the first time around. The HD allows the sets and action to pop with vivacity and pure, aesthetic brilliance. It truly adds so much to the experience, making the original feel devoid of life due to the Wii technical limitations. The soundtrack is also beautiful too, using arrangements that sound straight out of the Feudal era, making sure to fill earholes with plink-y, meditative hymns, bullish anthems for boss battles and heart-swelling, emotional pieces during the narrative high points. 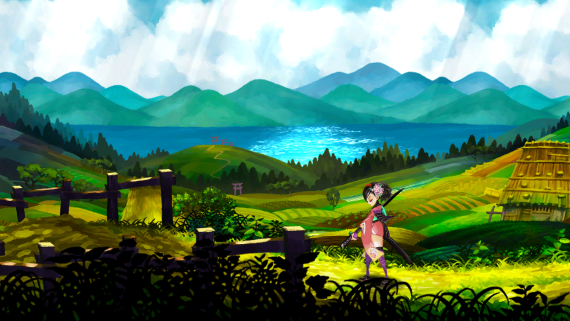 Outside of the graphics, there isn’t a lot new to this iteration of Muramasa, and as such it’s a tough sell to those who have already played through the original game. The localization has been vastly improved, but the gameplay is the same. Fortunately, that’s a great thing. Thus, if you haven’t had the pleasure of playing Muramasa before, and you have a Vita, Rebirth is wholeheartedly worth playing. It’s breathtakingly beautiful in all aspects — from its combat to graphics to soundtrack to the sword forging mechanic, this is just an immensely enjoyable game, even in spite of its repetitious combat and under-emphasized story.