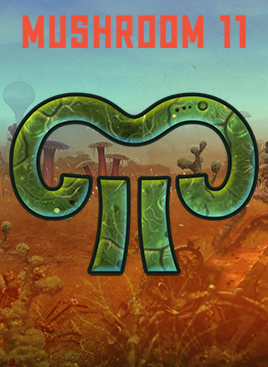 There are many types of objects that don’t make a lot of sense for a platformer.  Hedgehogs, for example, aren’t known for their speed and hopping abilities.  Bubsy the Bobcat makes more logical sense than a fat plumber as a run & jump character, no matter how terrible his games may have been.  The entire platforming menagerie, though, makes far more sense than an inanimate fungus, but physics puzzle/platformer Mushroom 11 makes it work.

Mushroom 11 follows an inanimate green blob as it grows its way across the landscape, past trials and obstacles that would annihilate a lesser fungal entity.  Movement is done by trimming away bits of the blob that are unnecessary, causing new growths from a random available surface.  Physics are in full effect, so if it gets top-heavy the mass will start rolling, but left alone the blob is more than happy to sit there in whatever lumpy configuration you’ve left it.  The fungus may look gelatinous but it’s actually solid, so if you’ve grown it into a bizarre shape it’s going to hold its structure.  That may seem like a small detail but the entire game hinges on this.  Most situations require some fairly ornate shapes, and the gelatinous goo the blob looks (and sounds) like would never be able to handle the structural needs of even the earliest challenges.

The burned-out overgrown wreckage of the world is a toxic nightmare, and while humanity is dead and gone life has adapted to its new environment.  Plants grow on everything but the sludge and lava pits, weird insects hover in the air, fire-breathing worms crawl through subterranean depths.  The wandering fungus fits right in to this post-apocalyptic world, but that doesn’t mean it’s going to find a peaceful home there.  Each level is a series of challenges interspersed with generous checkpoints, and each challenge is its own little anti-fungal agent.  You’ll need to control the blob’s growth practically down to the cellular level in order to avoid poisoning, antiseptic light, electrocution, and incineration.  Thankfully fire only singes the cells it touches, although that’s not much of an advantage when you accidentally drop the entire mass into a lava pit.  The broken world is a precarious place, and an uncontrolled blob is going to have an unproductively short lifespan if it’s not very careful.  This is made all the more difficult by the fifty plants and animals waiting to have their DNA harvested in each level. 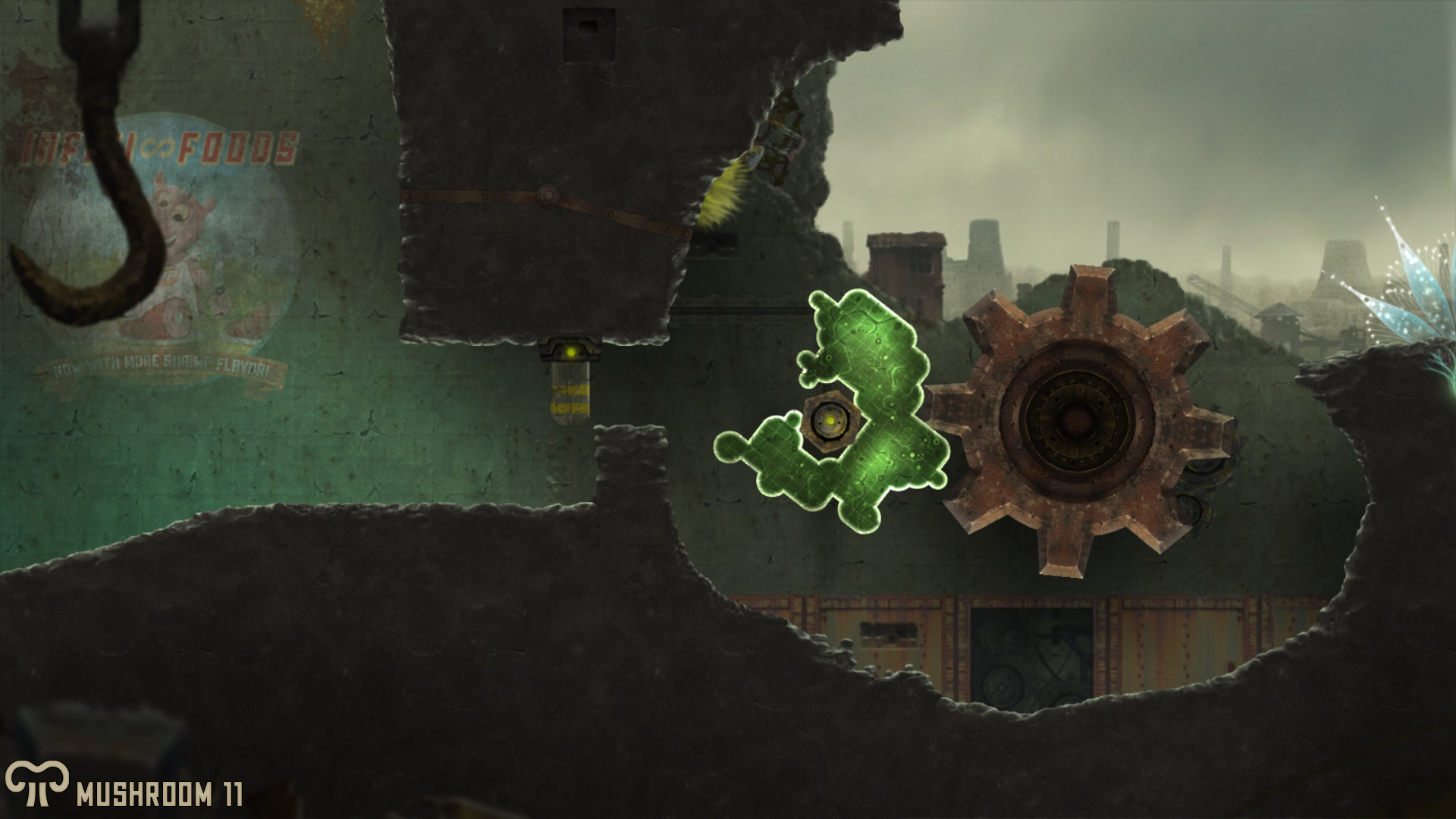 Like any good platformer, Mushroom 11 has its collectables to pull you off the safe path, but keeping with the theme of the game they’re weird bugs and plants hanging out in inaccessible areas.  Grabbing a plant might necessitate growing the blob into a crevice in the wall and then carefully managing the top and bottom growth until it sticks out like a plank, finally just barely touching and absorbing its target.  Alternately it might involve timing when to let go of a swinging platform, or maybe just cutting a small chunk of blob matter from the side and letting it drop, landing on the plant before either falling off the screen or landing safely to be erased.  One part of the blob is all parts of the blob, after all, and so long as the target is touched its DNA counts as collected.

All the puzzles and obstacles in the game rely on thinking like a fungus, in fact.  Not as in “find a pile of dung in a cool, moist place in the shade” but rather that every part of the mass is disposable so long as one piece remains safe.  There’s a light grid as part of the fungus’ design and each square counts as a cell.  Destroying one cell causes another to grow on an open surface of the mass, so long as some part of the body is touching the ground, and you can erase the blob down to a single cell and it will still pop up good as new once it’s out of the air.  Many puzzles involve dividing the mass into two pieces, or trimming it down quickly mid-air into a smaller, lighter version of itself, and it can be incredibly nerve-wracking when the only thing waiting below is a pit of acid.  Hanging off round pivot-points mid-air, wobbly spring-based platforms, or even guiding a rocket by balancing on its nose require a precise hand and a good sense of how the bits you trim off are going to grow back.  It can get to be highly fiddly work persuading the blob to grow in the way you want, especially seeing as the new growth pops out of a random spot, but a persuasive and patient bout of fungus-erasure will get you where you need to go eventually. 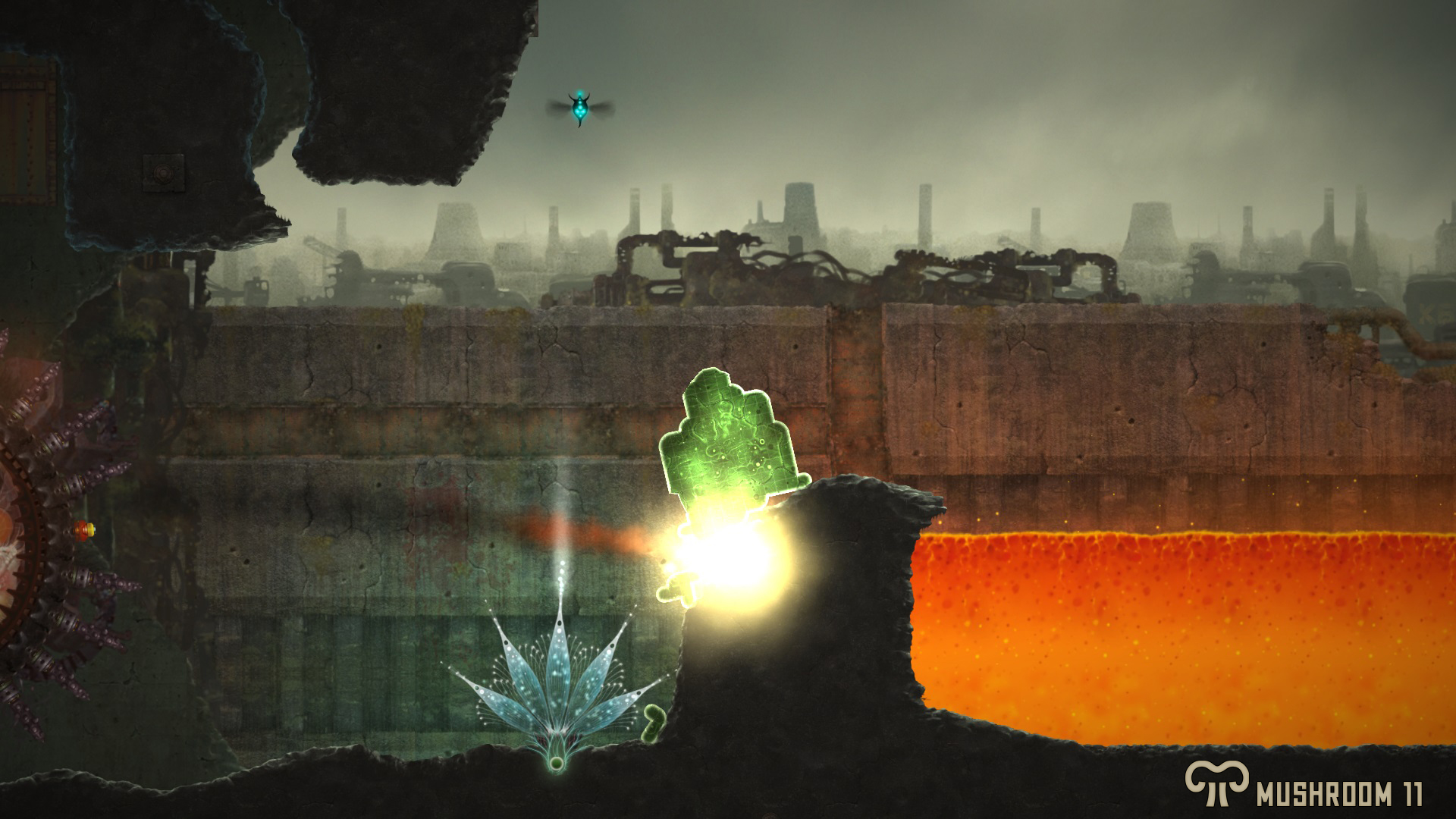 If it doesn’t work out, however, there checkpoints are scattered at generous intervals, usually after two to three challenges.  The reason for this is that Mushroom 11 is hard and isn’t shy about it at all.  The second level, for example, has an insect hovering high above a series of small circles the blob needs to mold itself around in order not to fall into a pit of acid.  The way to get the insect is to anchor the mass on one circle, brace it on the one above, and trim the sides to create a spire.  Alternately you can ignore the bottom circle entirely and balance on the top one, carefully adjusting the mass to prevent it from tipping over as you grow it tall enough to reach the bug.  The nice thing about this challenge is that, if the blob falls, it’s going to be in an awkward enough shape that it should catch on the struts below, unless you accidentally cut it in half and the small bits slide on through.  It’s painstakingly careful work, and happens midway between two checkpoints so is easy to lose to failure elsewhere.

Other challenges involve using the blob’s mass to effect the spin of various kinds of disk or platform, or carving off small chunks so they can be carried by updraft to inaccessible areas, or trimming a dangling part of the mass off a moving platform so its momentum carries it to safety through the gap in the spiked wall, and many, many, many other unique and maddening sections.  A big part of Mushroom 11 is the rage-quit, usually followed by the return to the game half an hour later and figuring out where things went wrong. 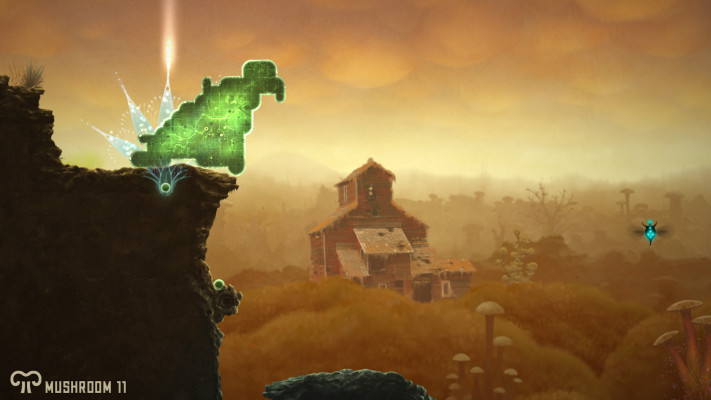 Mushroom 11 is a maddening, difficult, beautiful and smart bit of puzzle platforming.  Each level is a series of set-pieces in a hauntingly ruined world, growing off the remains of humanity but far from dead.  The remnants of civilization have left a toxic stain on the planet, but the life that survives is mostly capable of living in the desolation.  Absorbing every bit of life in the levels is both a challenge that’s hard to resist while also feeling wrong, like you’re aiding the world’s decay, but the endless parade up physics puzzles are too tempting to resist.  Whether it’s figuring out how to land on a platform so that, when it starts swinging, you don’t get dumped into the acid below, or guiding a rocket up an angled shaft so it carries you to the plants above, or sacrificing a chunk of mass so that it can get fried carrying electricity from generator to door, Mushroom 11 demands each area be looked at with the lessons learned from previous sections.  The wasteland of the corpse of civilization is not a forgiving place, but with a little care and a huge amount of perseverance, the fungus’ journey may let it see what lies at the conclusion of the unforgettable journey of Mushroom 11.