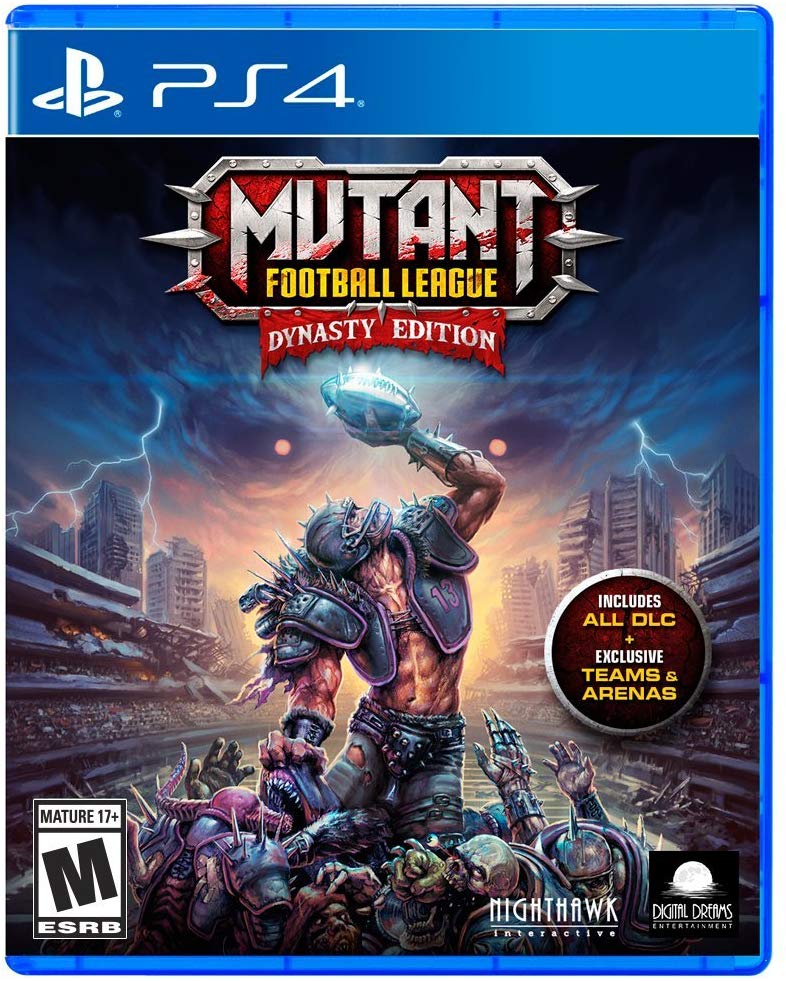 Some games hit a legendary status that never get a proper sequel and are only ever seen once. One of the best sports games of all time was Mutant League Football. This forgotten gem featured a parody of NFL Teams as fields were filled with traps and players literally died on the field. This was released in 1993 and besides a hockey version of the game, nothing else came from it. Enter Digital Dreams Entertainment. This team has created a spiritual successor with a modern version known as Mutant Football League. The first release of the game was in 2017 and now the developer has released a new version that isn’t only in a physical format, it’s also available on Nintendo Switch. Mutant Football League: Dynasty Edition is the complete version of the game and is better suited for reviewing.

There are two main components to know going in to playing MFL: Dynasty Edition: it plays just like NFL Blitz and it’s rudely grotesque and not for the faint of heart (or kids). MFL plays an arcade game of 7-on-7 football where plays are simple and everything on the field is over-the-top. You pick from one of 25 teams that are either parodies of real NFL teams or have some other stereotype to them. Teams like the Nuked London Hatriots or the New Goreleans Zombies parody the NFL teams, while a team like Full Metal Mayhem includes names that parody rock stars. Players like Nuke Freakly and JJ Rott are just examples of some of the parodies. You’ll find yourself pronouncing names to find out who is who as rosters are up-to-date as of the beginning of the 2018 season.

Each team has a politically incorrect story as you can read through their descriptions. Each team is also made up of different races of species to add a variety of players on the field. These can included Armoted Bruiserbots, Criminal Aliens or Skeletal Deadheads. With Dynasty Edition, Rampaging Werewolves and Hell-Spawned Demons have been added. What makes all these little aspects of the game special is that it was all created by the community. The parody names, team names and stories all are creative content from the fans. Yes, some names are a reach, but some are extremely funny. 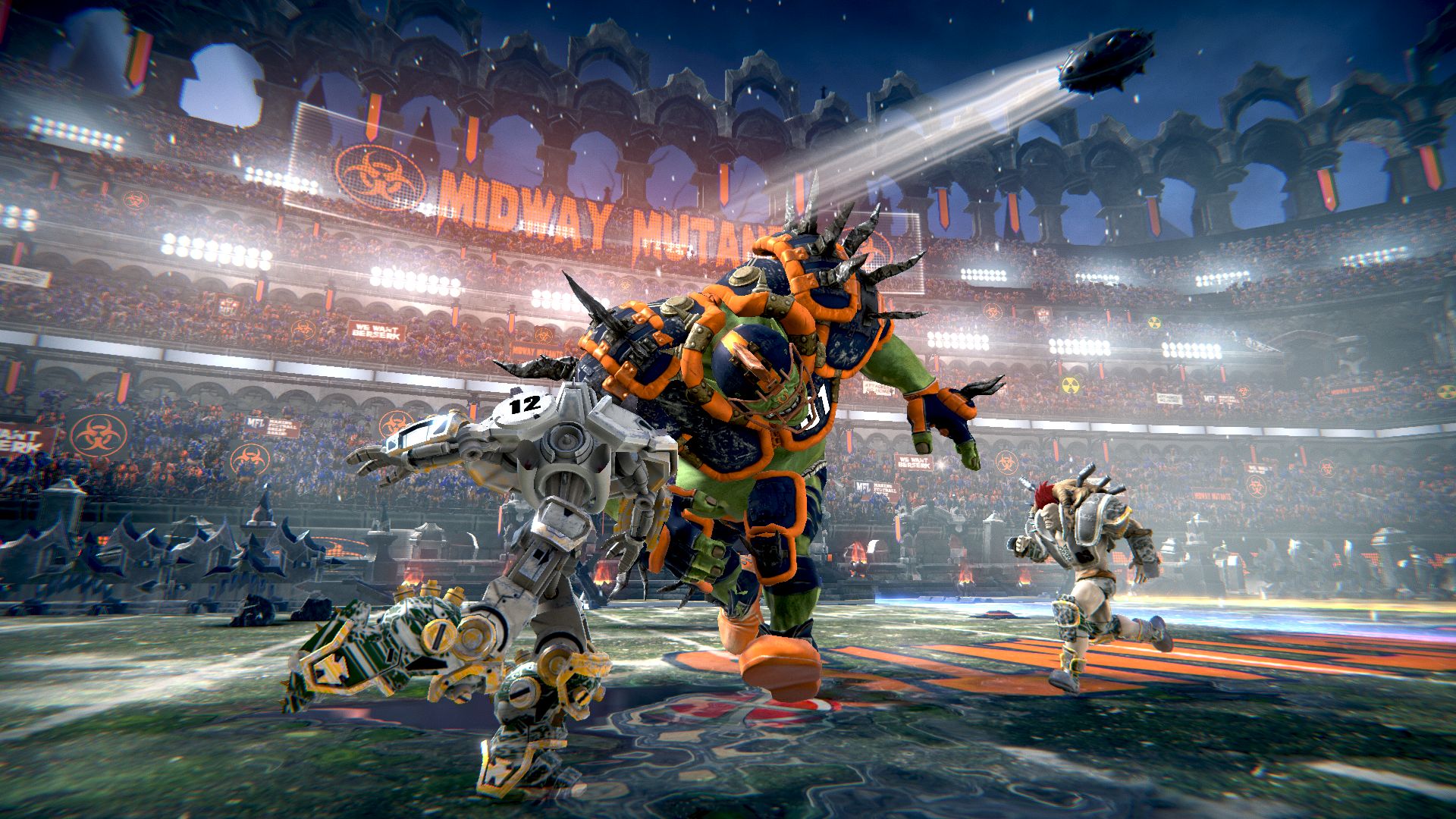 Stadiums are full of eccentric backdrops that would make Jerry Jones drool. New Gorleans features two skeletons on jazz instruments and there is even a stadium in space that affects the game speed and looks like a future sci-fi backdrop or someone’s computer RGB effects. There is a lot of variety that pigeonholes the stereotypes of each team name and it makes it exciting to play in different stadiums. The football field is also full of traps that can account to player depth on your team. Fields will have mines, giant metal blades, pits of misery or out of bounds traps.

What truly gets overlooked in this over-the-top arcade football game is the strategy. The more you play the game, the better you will become at situational strategy and it’s clever. MFL includes Dirty Tricks and each team has a specific set. Whether it’s incorporating the field traps to your advantage or playing a Dirty Trick, the right move at the right moment can prove pivotal in each matchup. Dirty Tricks include bribing the ref, then killing said ref because he’s bribed. Other Tricks include jumping offsides to kill the quarterback, throwing a hot potato bomb that blows up, Roid Rage which makes your player unstoppable or one of many others. The strategy plays in because each player takes damage. Players literally die and can no longer be used. Players can be substituted to help regain health. Once your team is all out of players, your team forfeits the game. All of this amounts to a deeper game of grotesque chess, especially if you can’t match up with the other team’s talent. 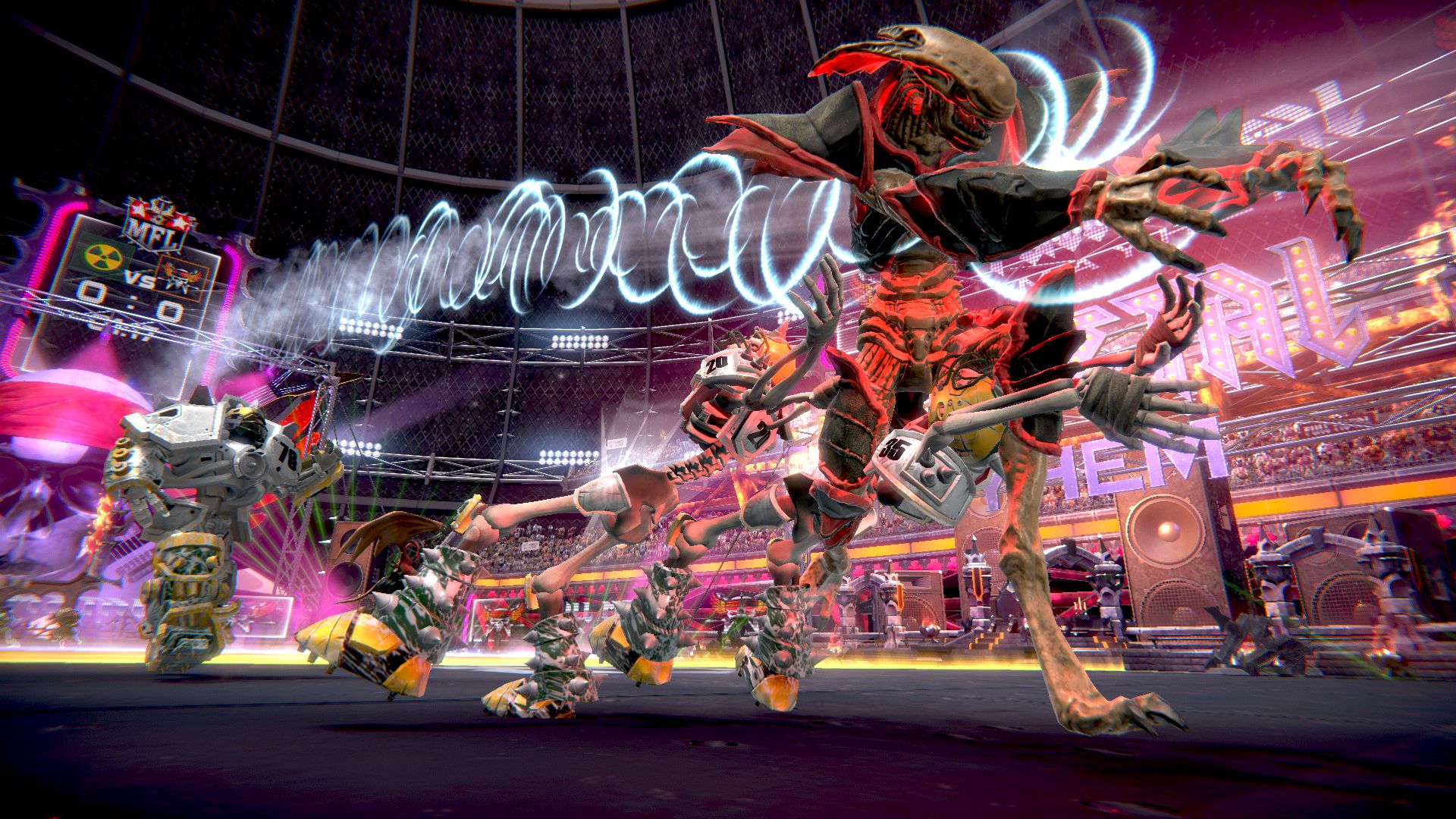 Dynasty Edition isn’t barebones in terms of modes, but it isn’t detailed either. The big edition is a Dynasty Mode aka franchise mode that adds a good bit of depth to the game. Dynasty Mode allows you to choose you favorite team and have to work your way up to be a contender. The goal is to win the Mayhem Bowl within 3 years for an extension. All your players start off with a ranking of 40/100 and you will get blown out like an expansion team. XP can be earned for each player, but it’s minimal. You have a set budget to use and you can trade for players to get better or sign free agents that are parodies of NFL Hall of Famers. Players like Neon Primetime and Night Train all have extremely high ratings. Basically, you just buy the best team and try to groom backups. Dynasty Mode tracks league stats and mimics most everything expected from a franchise mode in a sports game. It cost money to resurrect dead players after each game and it’s easier to purchase XP from money earned rather than depending on in-game success because that simply isn’t going to happen. Lastly, players get suspended for things that happen in real life that you hear about on the news. Scandals play a part and can land players suspended.

Other game modes include play now, a season mode that player deaths carry over each game, a playoff mode and online matchups. The online matchmaking is a bit strange but it helps make up for any lack of players online. You can play with friends or matchmaking is random. The unique part of the matchmaking is that the game notifies you when someone is looking for a random matchup no matter where you’re at. You can pause the game and match up. There’s no lobbies or anything like that and searching for a game can take a while. As for the online experience, there was no lag and it played flawlessly. 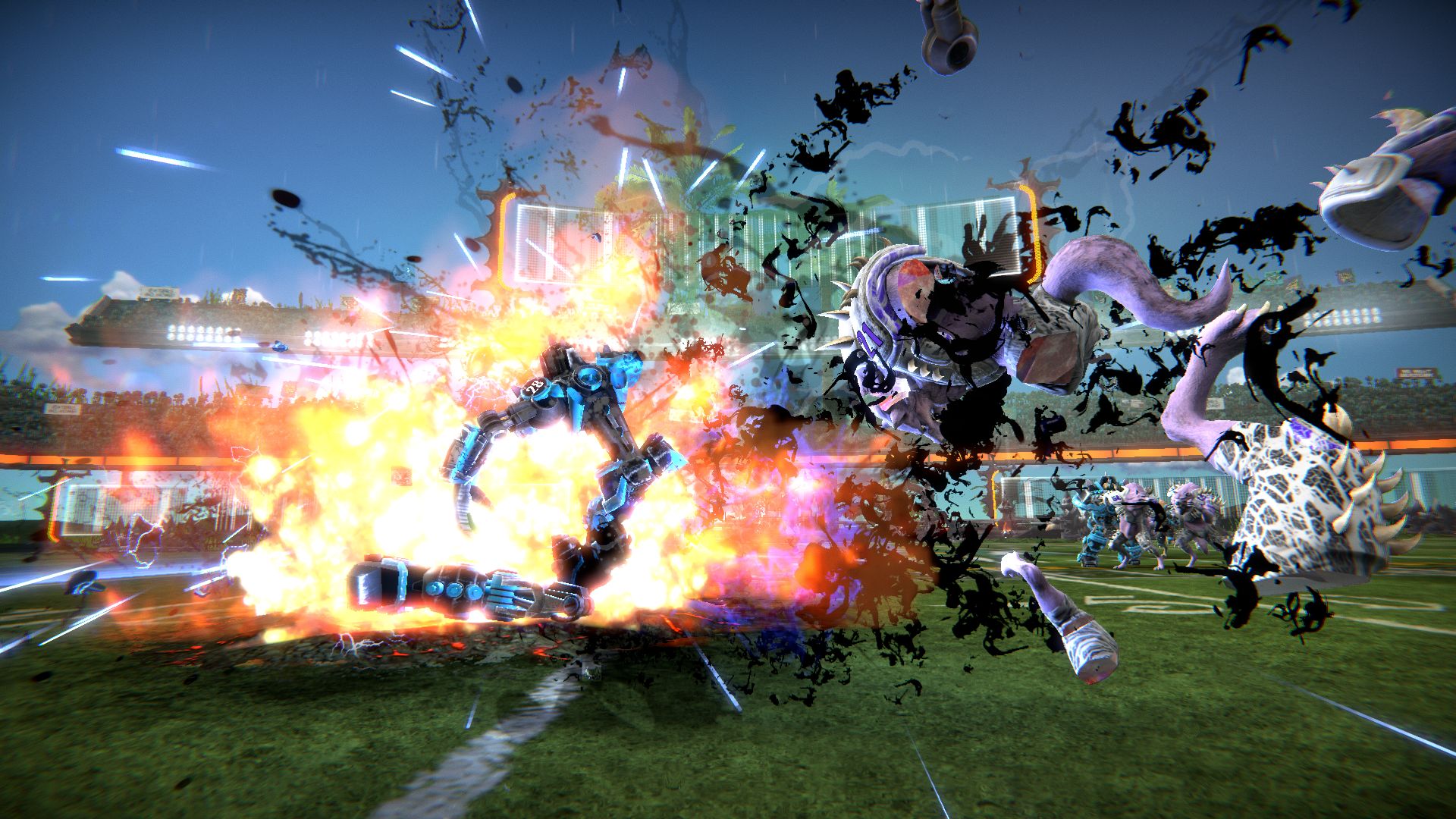 Visually, MFL does an adequate job with what it has to work with. Stadiums and fields look diverse while the players look grotesque and distinct. The game runs at a smooth 60FPS but is a bit rough around the edges. This isn’t a big budget title and succeeds with the resources available. It’s a fun and unique looking style of football that won’t be duplicated elsewhere. Player animations are solid enough across the board. Everything from throwing motions to spins, jukes and tackles are adequate enough for a game that retails for $29.99.

The cherry on top that draws you into the action is the commentary. Tim Kitzrow, legendary announcer from NBA Jam and NFL Blitz, calls the action along with some color commentary. It’s vulgar, funny and not for children. He does straight up drop “F” bombs and the first time you hear it you have to double check what you just heard. The timing is good and it sounds like a true broadcast, but the more you play the game, you will hear redundancy. 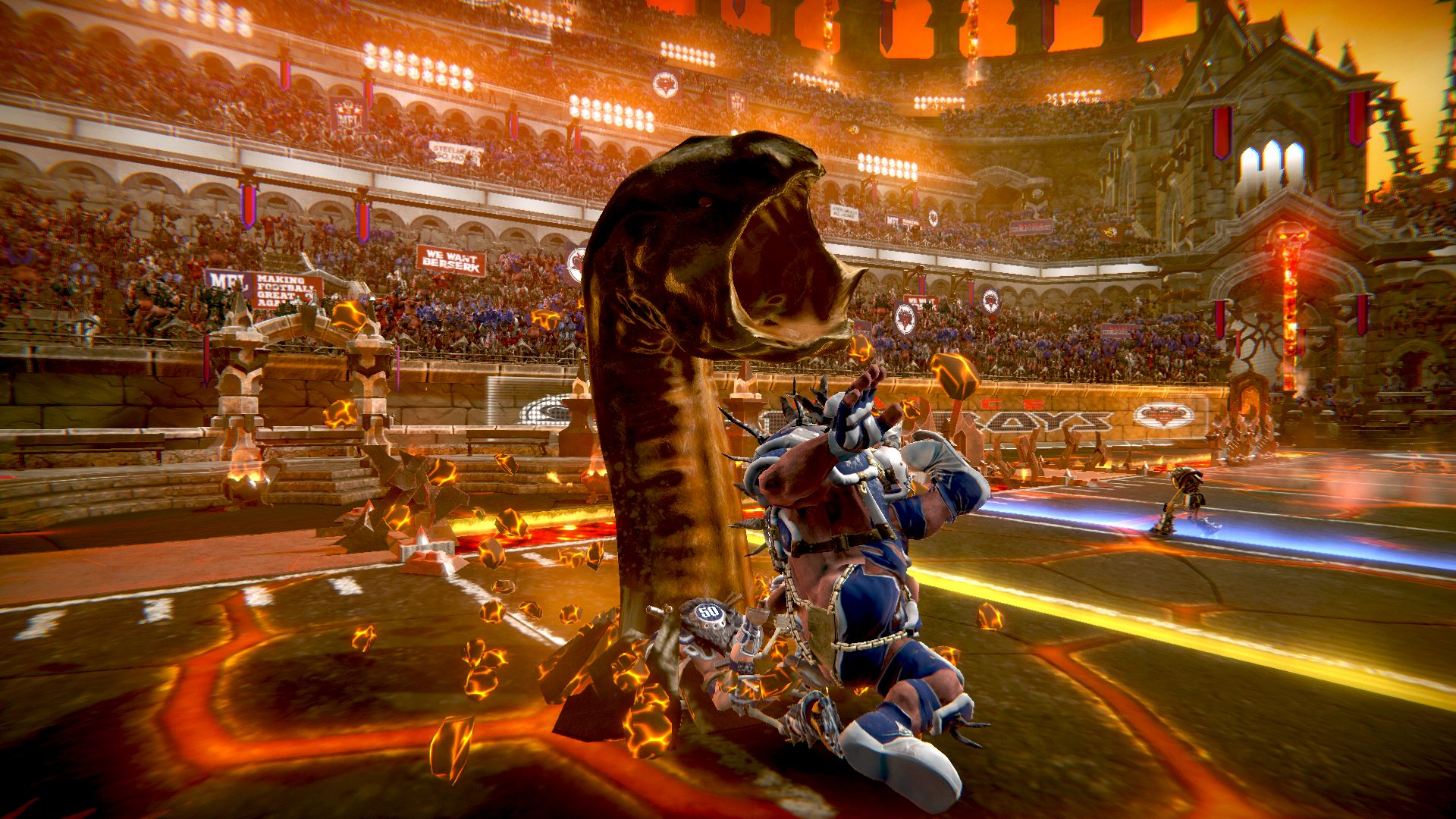 Mutant Football League: Dynasty Edition is a respectable spiritual successor to a legendary game. Yes, technically Dynasty Edition is added DLC, but it is the first to come out on a physical format and also on the Nintendo Switch. Even though the football action is a 1-to-1 representation of NFL Blitz, the strategy involved from the Dirty Tricks and field traps add a deeper and strategic experience to football. The Dynasty Mode is a worthy edition as has enough elements to make it stand out on its own. For $29.99, the package that is here is worth the price for a football fan of any level. Football nerds will all enjoy the name and team parodies where casual football fans will enjoy the action and comedy on the field.