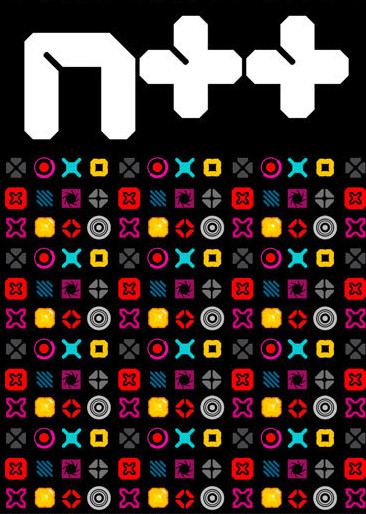 What if I were to tell you that a single game could cater to all of your platforming needs for the next year or so?

N++, the followup to the cult hit N+, is essentially that game. Through a combination of near-perfect physics, simple controls and a complete mastery of the concept of understandable failure, N++ stands out as perhaps the best platformer to come out this year. Not only does it have everything you could possibly need from a platformer (minus online functionality), but its fantastic soundtrack and minimalist aesthetic make it one of the best sensory experiences you can have on Sony’s flagship console. Make no mistake, this is a game that will elicit a great deal of rage and frustration due to its backbreaking difficulty, but Metanet Software has done everything in its power to make every single death understandable and logical. If you’re able to find a single instance of failure in its 1325 Solo levels, 470 Cooperative levels (not counting the single-player stages which can be played with up to three friends), 475 Race stages and downright unlimited community-created courses, you’ll have essentially discovered this title’s Holy Grail. Developers far and wide should take note, as this is how you create a polished experience.

Much like N and N+, N++ puts you in the shoes of a ninja with a hyper-accelerated metabolism that results in a ninety-second lifespan, which is played out over the course of a single five-stage episode. While this may seem like a disastrous situation for our unnamed hero, the nature of this ninja’s metabolism allows for amazing feats of speed, jumping and aerial maneuverability. Every standard level houses the same goal: find the button that unlocks the end gate, and make your way to said exit. Along the way, you have the option to pick up gold, which not only activates a sensationally satisfying sound, but it allows you to extend your character’s lifespan incrementally. While N++ is home to an extremely simple premise, the sheer amount of possibility that Metanet and its community have extracted out of this concept makes N++ an absolute joy to play. As you saw in the paragraph above, there’s no shortage of content here, so if you’re looking for a game that has the potential to remain fresh for months on end, you’ve found your match. 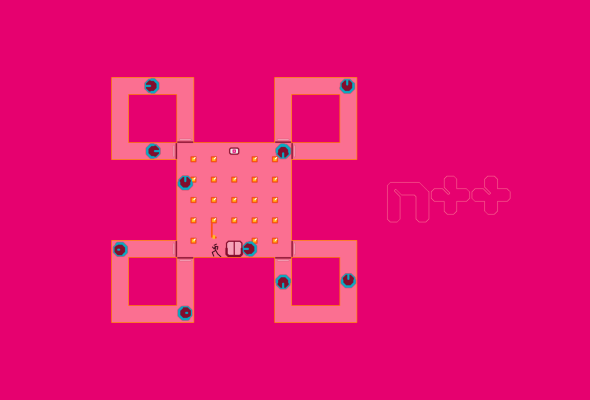 The highlights of N++ are undeniably its tight controls and spot-on physics system, which result in players never feeling out of control. The biggest complaint that gamers seem to have in regards to platformers comes from loose mechanics that create the uncomfortable and infuriating feeling that any given death was not a result of direct player action. N++ manages to combine short precision platforming with moments of pure float-heavy bliss, all while never sacrificing exactitude. Every jump and directional shift is frame-perfect, something that non-Mario platformers frequently strive for, but so often miss. This was a title whose page was looming in the PlayStation 4 storefront ever since the console’s launch, with a development cycle that felt like it was going on forever. Because of how well it controls, the wait for the sequel to N+ could not feel more worth it.

While N++ is one of the most challenging titles on the PlayStation 4, the smooth nature of its difficulty curve allows players to learn valuable lessons without even realizing it. The combination of a series of outstanding introduction stages and a tutorial-free universal language that is simple to understand makes even the most challenging levels feel achievable. This is where N++ achieves that “crack effect” that so many games strive for; you’ll see a seemingly insurmountable task (like completing the insane laser-shooting user-created Godzilla stage), and whether or not you actually have the skill to complete it feels irrelevant. What’s more, trying the same thing over and over again never feels like a chore due to the fact that every mistake manages to teach you a lesson. There are often multiple paths through each room, and those who experiment with different strategies will not only find success, but also the building blocks for future accomplishment. Don’t get me wrong, this is a game that will likely see you squeezing your controller until your knuckles turn white, but its difficulty adds valuable playtime and tangible moments of accomplishment to the proceedings. 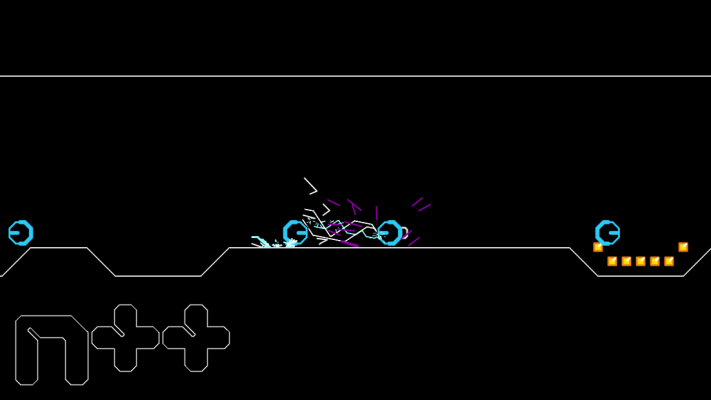 In addition to the standard solo campaign, which includes levels from N+ under the Legacy moniker, the addition of cooperative play turns N++ from a individual test of skill and will into an exciting party game for hardcore gamers far and wide. Granted, this isn’t the type of game that someone who has never picked up a controller before is going to be able to play at a party, but if you have three other players who are competent at platforming, the opportunity for chaos makes N++ an awesome value proposition. Not only can you play through the traditional solo campaign with up to four players, but there are a number of cooperative levels that require both ability and resourcefulness. The idea that some players will have to sacrifice themselves for a common goal goes against the idea that you’re supposed to avoid death in a video game, so making this a requirement for some stages is brilliant in its own special way. Add this to the exciting Race mode that sees players rushing towards the goal while trying to out-platform each other, and you have the makings of an amazing cooperative experience. Granted, races can be completed alone, but it isn’t really a true race unless you’re competing, is it?

N++‘s robust level creation tool and its already outstanding community (this can’t be understated: this is a game that came out two days ago and the community is already producing pure gems) give it the potential to be a game that certain players will play forever. Sure, you’ll be able to pick up shorter platformers over and over again, but the idea that new content is constantly being uploaded to Metanet’s servers means that there’s always going to be a novel challenge for players to ignore. 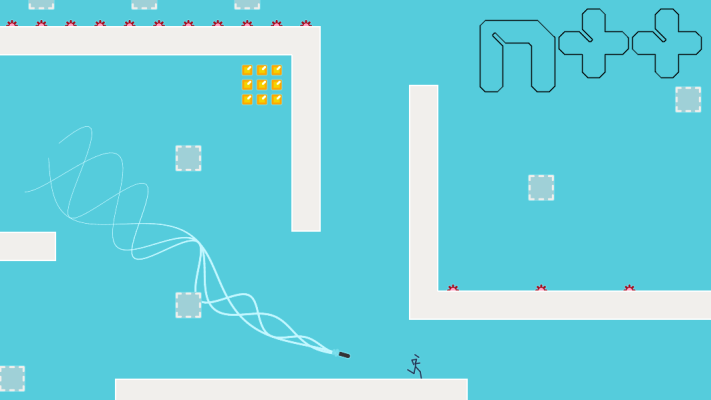 Player-created content has allowed titles like LittleBigPlanet to have lifespans that far extend what anyone could have ever hoped for, and barring some sort of catastrophe, N++ should be the same way. If you think that Metanet’s standard stages aren’t hard enough, head over to the “Hardest” playlist in the community section and tell me that you aren’t being challenged enough.

The biggest, and potentially the only flaw in N++ is its current lack of online co-op. Being that the PlayStation 4 is a console with heavy online connectivity potential, it’s definitely disappointing to see a complete absence of online play. Granted, even a tiny bit of latency could cause some problems in a game whose core concepts are so heavily dependent on precision, but it’s still a shame to see Metanet not explore what N++ could be with online play on real-world servers. 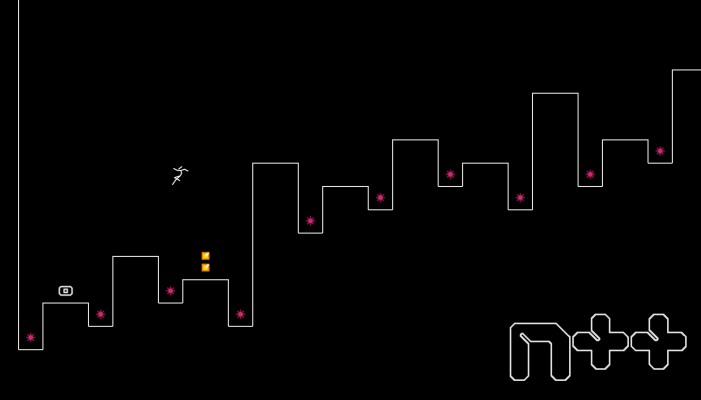 There have been a great deal of fantastic platformers this year, with Ori and the Blind Forest and Axiom Verge being standouts, but N++ might be the best of them all. Its seemingly endless array of content builds upon its fantastic mechanics and physics to create one of the most satisfying titles to come out in 2015. The PlayStation 4 is rapidly becoming a home to some of the most challenging, yet rewarding titles around and that home just got a little bit more populous thanks to Metanet’s gem. Whether you’re someone who wants to play one of the toughest games of the year, or someone who just enjoys pure gameplay at its finest, you’re doing yourself a disservice not giving N++ a shot. You’ll die a million times, but every single one of those failures will remind you that success is just around the corner, and that’s a beautiful, beautiful thing.