Depending on who you talk to, you’ll hear a variety of theories about what makes a great shooter. In the end, though, it comes down to this: a quality shooter should be fun to play… repeatedly. That’s all there is to it, and that’s why Nanostray 2 is such a success.

You’ll notice immediately that Nanostry 2 looks and sounds great. Even the title screen is impressive. The stages themselves are alive with moving architecture, swarming fighter ships, mid-level bosses and massive vessels at their conclusion. The music also is high-quality, orchestrated in a sci-fi manner without generic rock guitars in some games. There’s even digital voice acting that goes well beyond the “you died, ha ha ha” variety. Numerous console titles fall short of the quality on displathat ruin the mood in here.

Within that framework rest several worthwhile modes. Start with the “Adventure” one. There, you’ll find a vertically-scrolling introductory stage that acquaints you with your ship and its means of defense. You have three points of customization for peripheral shots. When you begin a new area, you can only fire straight forward. Before long you’ll also have two supplemental cannons firing to your specifications (modified to your liking on the menu that precedes each stage). These can then be repositioned using the shoulder buttons to shoot in pretty much any direction you choose. 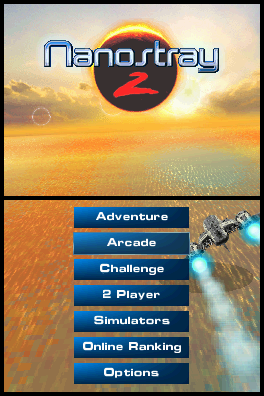 Whether they scroll horizontally or vertically—and Nanostray 2 includes numerous areas of both orientations—the stages you encounter are built around proper use of your firepower. You’ll find shafts with wall-mounted cannons that can pepper you with bullets if you let them, but once you know where they are it’s not difficult at all to shift your assault ever so slightly and remove them before they can even pose a threat. Memorization plays a significant role even in early stages. Ships might slam into your side before you know they’re coming on your first trip through an area, but the second or third time, you can great them with a barrage of bullets even before they arrive. There also are rechargeable special weapons, which the savvy player will mostly save for spectacular showdowns with stage-end bosses (or for those who drop a bunch of the coins that replenish your meter). It’s fun to figure out how to put everything together in a way that allows you to beat your previous best performance within a given stage. Even when you can get through a stage without losing a ship, there’s usually a general feeling that you can do better and a desire to prove it.

Once you’ve accessed a new area by progressing that far in the “Adventure” mode, you can also practice it in the “Arcade” setting without repeating familiar stages too much. If that’s not enough to hone your skills, there also are “Challenge” and “Simulators” options that truly put your ingenuity to the test. For example, one challenge might ask you to move around the center of the screen dodging bullets and ducking behind moving barriers. If you can accomplish such feats and yet still have trouble with the main game, you’re perhaps doomed to suck at shooters forever. 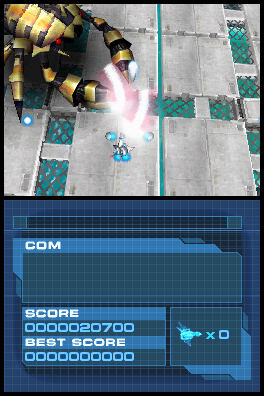 Traditionally, games that needed to carve out a niche for themselves within the crowded shooter genre have done so by introducing a new gimmick. Nanostray 2 relies instead on pure polish. The result is a game that feels a lot like the best parts of many classics that came before it. It might not appeal to the folk that engage in epic debates about the differences between Cave and Psikyo, but for the rest of us it’s well beyond satisfactory.