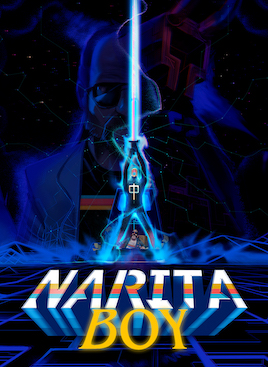 I’ve got to give it to Studio Koba and Narita Boy for using what might be one of the most despised forms of post-processing — and generally one not many people would go out of their way to ensure is existent in a game of their choosing — namely Chromatic Aberration. And further a field, the artistically-misled perception that a move away from clarity somehow heightens an aesthetic. All manner of fog, bloom and letterboxing too, just as guilty. Narita Boy somehow finds a way to make such fractured visuals not only tolerable, but in a way effective at what it’s meaning to portray here. Even if Studio Koba’s game-within-a-game set-up — the idea that just maybe we the player may in fact be controlling someone else controlling the titular Narita Boy — is admittedly all surface-level.

There’s no surprising gameplay depth or some fourth-wall breaking, left-field turn players can expect from out this brief seven/eight hour title. Much like its primary ’80s visual style, the imagery posed feels more so a loving indulgence in that particular culture. Yet, thankfully, one that is at least aware of how dumb such an obsession may look to an outsider. That acknowledgment, that level of dignity — on how overblown and excessive current time’s obsession with ’80s culture has become — is much appreciated in a game like Narita Boy. Not because it grants Studio Koba an open goal to secure their own stab at a somewhat comical, self-indulgent foray into action-adventure antics. But as it turns out, it’s only one of a handful of aspects Narita Boy has going for it. The sad truth being that beyond its visuals, its quainter, ambient approach to ’80s synthesizer music — likably-cheesy opening and closing themes aside — and a couple of tense boss encounters, there’s nothing here to proclaim as unique in its own right.

First and foremost, Narita Boy isn’t a Metroidvania. Or perhaps to put it more bluntly, it’s not an entirely good or exciting Metroidvania. Yes there’s back-tracking, yes there are items and upgrades to acquire that unlock new routes. Yes there are branching paths which may or may not lead to an optional collectible. There’s subtle puzzle-solving that doesn’t always spell it out for you, which is nice. And yes, there’s a spot of delight to share at the spectacle Studio Koba put before you with the team’s world design. One that for all its on-the-nose references to computers and lingo that can’t seem to go five minutes without mentioning the word “code” or its equivalent, still makes the journey worth it in brief spots of spectacle. Not least the finer detail with its pixel art and occasional character/model design. On a pure artistic stand-point, Narita Boy has it in itself to wow and impresses with its painstaking dedication. Studio Koba can’t be faulted for giving their Digital Kingdom a touch of awe and eery mystery about its vast plains and at one point, a grandiose city to end proceedings on. 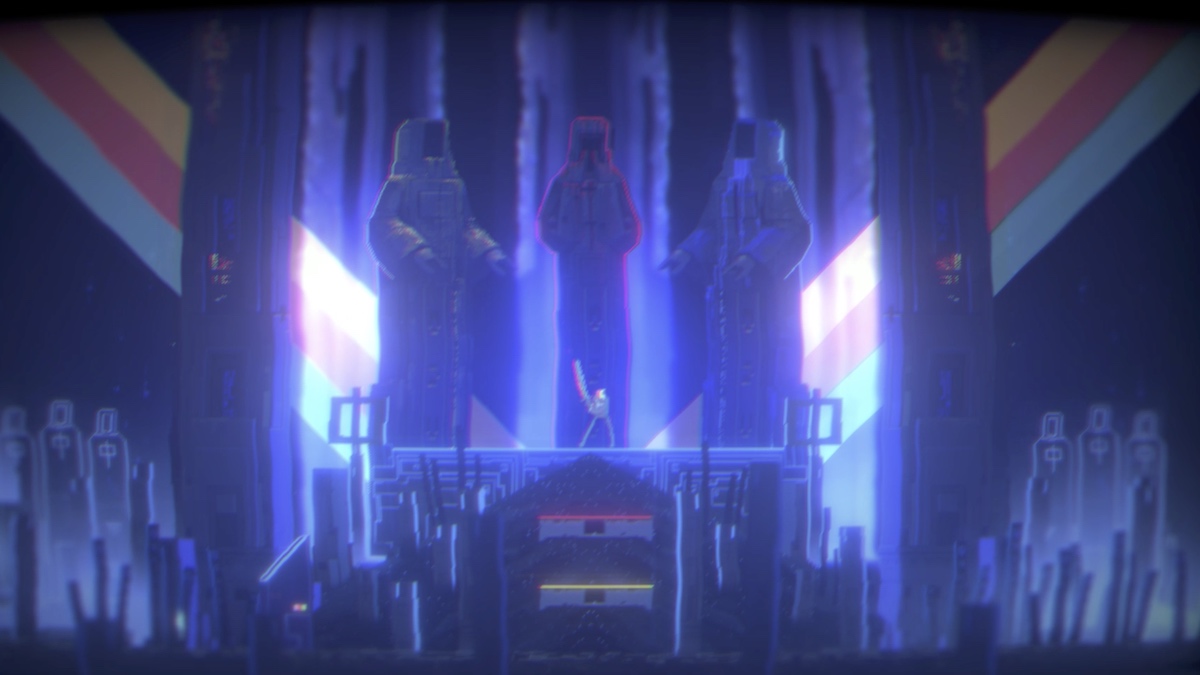 Again, it’s the kind of indulgence Narita Boy is fortunately granted. One that at its best, offers a splendid array of pixel art and color usage that ties nicely into the grander, encompassing ’80s setting. Take that away though and the game is a litter of short-comings that ultimately sully what goodwill its aesthetic brings. And not just through a general lack of any real originality (though that’s one of the main gripes) or at the very least an attempt to add to the bevvy of more interesting ideas sprouting up in the past few years from games of much better pedigree. But there’s times that feel that Narita Boy is trying so desperately to ride on the goodwill of a sub-genre like Metroidvania, or even the more-broader action-adventure staple, so as to make up for its sparse and at times shallow progression. Don’t look too close, the game seems to suggest. You like Metroidvanias? Well we’re one of those too — that’s good enough, right?

Sadly not, Narita Boy. Back-tracking is all well and good providing the journey there and the exploration that underpins it provides both intrigue and enjoyment with what we find. It’s not good when a game like this is clearly using such things as locked doors and distant keys to acquire just to pad out its run-time. Running back and forth between distant locales, without providing much to compensate aside from a quaint vista or two in the backdrop. Not even its occasional platforming can make up for how barren and overstretched these segments can be. Sadly, there are one too many cases of this in Narita Boy and while some of the visual accompaniments have their moments, it’s nowhere near enough to excuse a game that at times feels like it’s completely misconstrued a sub-genre’s entire design philosophy. 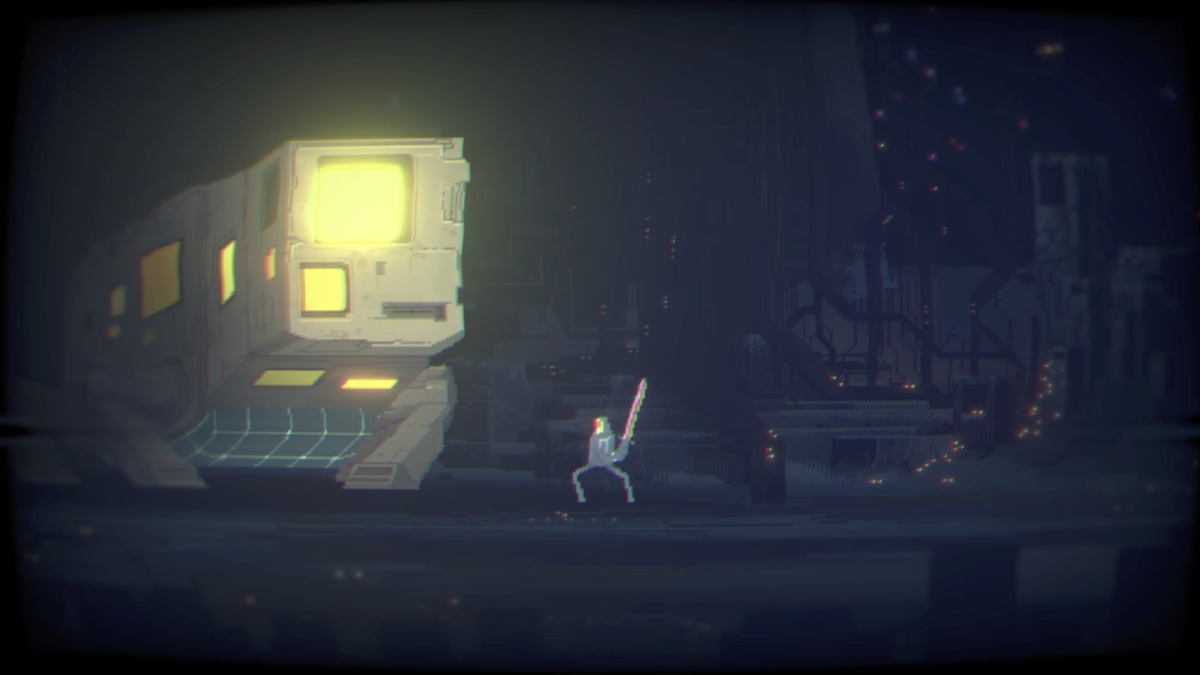 That feeling of misunderstanding extends to even the story Narita Boy is hoping to tell and it’s a problem that manifests two-fold. Firstly, its main narrative on saving a kingdom from being taken over by an antagonistic force and secondary to that, piecing together the backstory of [in-world video game] Narita Boy’s creator. Not only does it feel like Studio Koba are worried that players will not be enticed by their proposition unless world-building and expository dialogue are unloaded so heavily on the player — even beyond the first hour-or-so. But in the case of the secondary narrative, it’s hard to see it feeling in anyway beneficial to the tale being told. Even by the third or fourth memory you visit throughout the game, you can tell where the backstory is leading. What key moments Narita Boy wants to have hit hard (which don’t) and more disappointingly, right near the end, what sudden plot-twists it wants to be dramatic and illicit a kind of “oh god, what’s going to happen?!” reaction. Which again, they don’t. Little of the story hits in the way its creators want it to — admittedly interesting the implied premise of a potential sequel may be.

So it’s when the game is removed of its more story-leaning elements, that Narita Boy is at least occasionally enjoyable to interact with. When its retro-styled dialogue boxes crammed full of verbose terminology and slow moseying-on through creator memories are ditched for the time being, the combat is thankfully afforded the space it deserves. Even if, again, this aspect too clearly owes much to the title’s preceding it. And at times, feels like it’s unsure on what kind of combat set-up it wants to be. One that is fast, frantic, punishing even. Or one that is slower, methodical, a case of timing one’s moves well. The result is a weird mish-mash — a Frankenstein-like middle-ground where aggression and strategy are neither served. The best moments coming during the more major boss encounters in the latter half of the game. Moments where failing to avoid a foe’s attack pattern is costly and the desperation of finally attaining victory, though gripping, at the same time feels a little lacking in depth beyond “spam attack to win.” 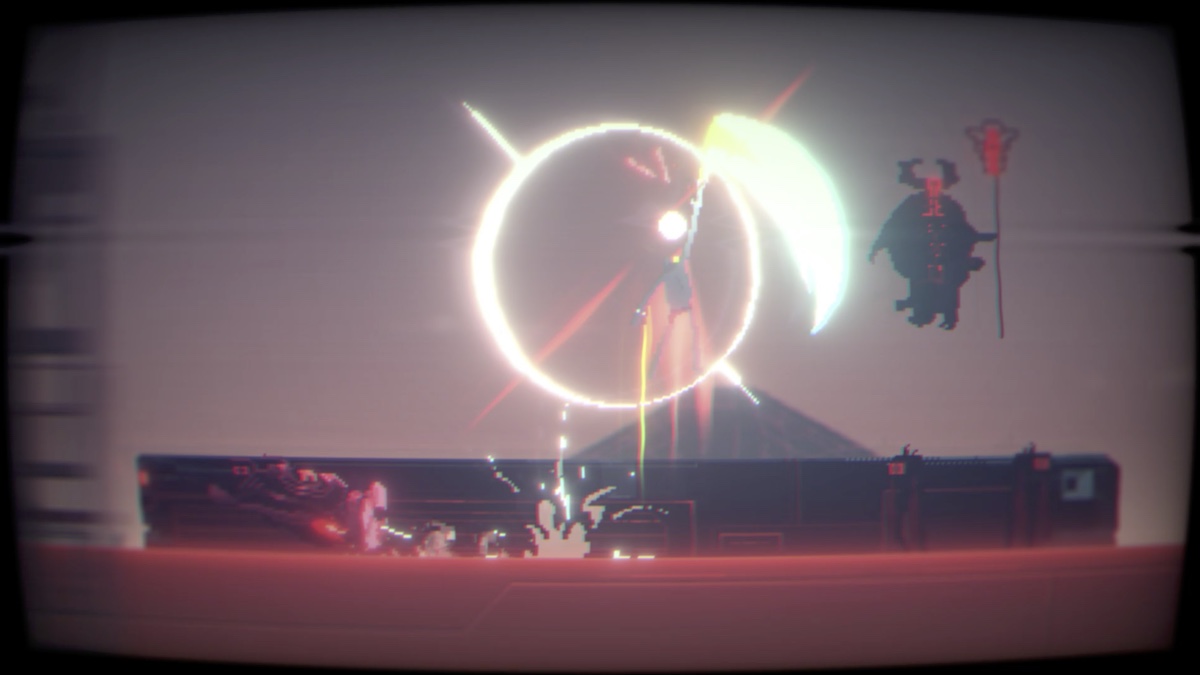 Even so, there’s enjoyment to be had during the latter parts when combat encounters get hectic. When you’re having to deal with a multitude of enemy types — enemies whose weaknesses and solitary means to break their guard requires you using the length and breadth of the skills you’ve acquired up to that point. The point where projectile-firing foes, area-of-effect variants and those annoying bat-like enemies are all flung at you all at once. It’s not exactly the most comfortable-feeling style of combat, but Narita Boy gets the job done sufficiently enough. Later still, certain enemies requiring a particular “stance” to properly deal with — which is at least some form of deviation and upping the ante the further you progress — but eventually resorts so much to throwing everything at the player, it once again almost feels like padding. Stretching battles out longer than they need to. Requiring you to take out everything on-screen (yet again) until the game considers it time to let you carry on. Moments that Narita Boy unfortunately doesn’t convince us are worth the stall.

Such is the problem with the misdirection on such set-pieces — on what parts are considered meaningful or worthy of such a lengthy time-sink. But nothing in Narita Boy is as egregious or as puzzlingly misguided in design than a moment around half-way where you’re forced into a runner-like segment atop a robotic steed. I take no pleasure in saying this, but it’s by far the worst designed moment of any game I’ve played so far this year. But it’s to the extent Studio Koba get this segment so terribly wrong that’s most damaging. Essentially requiring you to dodge a litter of enemies and spike traps both on ground and mid-air alike. The problem being that not only are you moving so fast you have little time to react, but the game demands so little (if at all existent) a margin of error in what is a lengthy sequence. On top of this, a means to recoup lost health barely functions half the time — sometimes it does, sometimes it doesn’t — and without rambling on too much let’s just say it’s such a sudden and shocking low for a game like this that should know better. 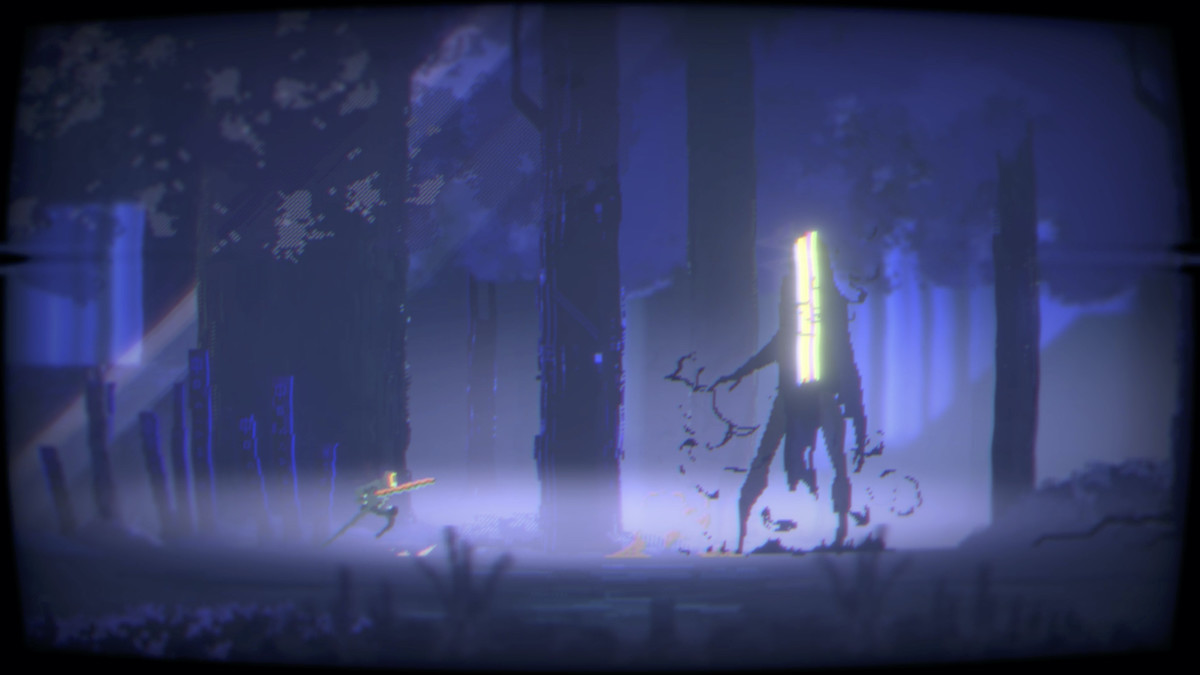 At its best, there’s moments of appreciation and respect for the artistic detail Narita Boy lavishes in, with its pixel art and generally-eery vision of cyberspace run amok with corrupted foes. At the very least, the somewhat-warped screen display and drenching in ’80s culture tropes is anything but off-putting. The problem then lies with its simplicity of delivery and the general lack of appeasing those looking for something more than surface-level attraction. A world that too often feels unnecessarily padded on a level design basis; a combat system though not terrible, feels too undecided on what it exactly wants to be. And beyond that, a story/narrative the game could’ve gone without given how little relevance or even impact it holds on a player’s progression. Venturing through the Digital Kingdom does spark moments of delight, but beyond its art-style and fond execution on aesthetic, Narita Boy‘s unenthusiastic lack of originality and care for its overarching design winds up carving out a satisfactory yet tepid debut for Studio Koba.