As a fan of NASCAR since the late ’80s, I couldn’t pass up a chance to cover the latest gaming entry for the sport. The transition from EA publishing the games to Activision was a rocky one, with the first entry being lambasted and successive games getting much better. AI was beefed up and more racing options were added. Now, with a few years of experience at the helm, Eutechnyx returns with NASCAR ’14.

Whatever AI issues hurt prior games have clearly been done away with here as it’s fairly challenging even in quick race mode. NASCAR ’14 is quite accessible, with easy to use menus and something more games should have – a difficulty slider. Unlike some games that penalize you for changing the difficulty, this one doesn’t. Highlights mode allows you to rewrite history, which will test your mettle if you’re used to driving with assists since everything here is a pure simulation. The meat of the single-player game is a career mode that sees you go through a whole season – practices and all. Now if you’re impatient, this can be quite troublesome, but the time it takes to go through everything is worth it. 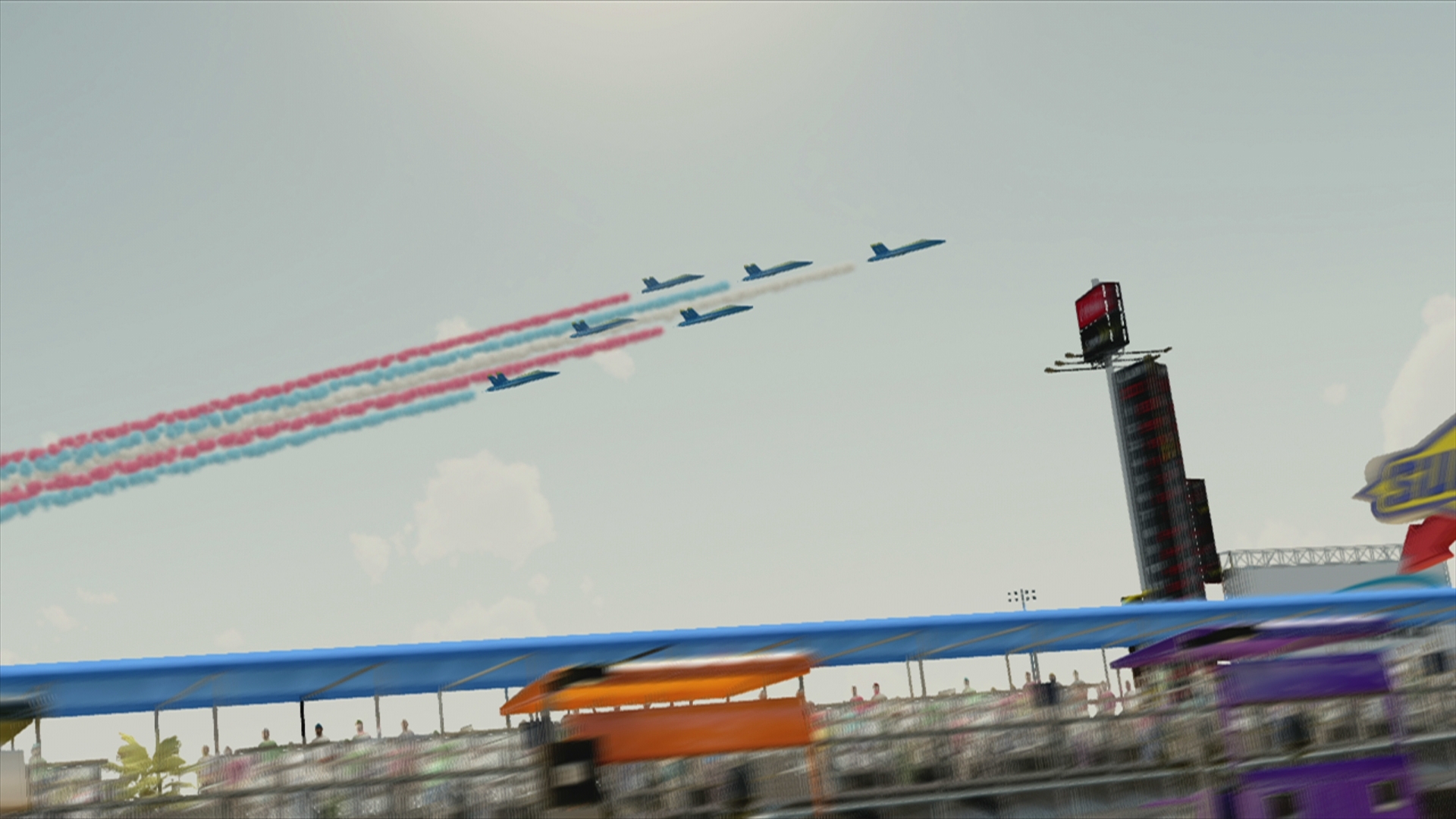 While you can sim the practices, you won’t do very well in them that way, and the less time you spend behind the wheel, the worse you’ll be in the game. You’ll wind up towards the back end of the pack and lucky to get into the 20s by the end of a race. If you want a podium finish, you’ll have to put the time in to do the practices and learn the game. The AI is fairly aggressive and will slam into you if need be. If cautions and start and stop racing bug you, then you can adjust things to your liking by taking those out. The key to how good a racing game is how exciting the races are, and luckily, NASCAR ’14 passes that test nicely. You’ll need to use strategy here since attempting to force your way through will backfire. Even with lower AI settings and cautions turned off, contact still results in cars spinning out and you being placed in immediate danger as a result.

At a minimum, you’ll wind up with some severely scratched paint and decals. Speaking of which, new to NASCAR ’14 is a Forza-esque decal editor that expands on the also-new ability to customize paint jobs for your career vehicles. You’re able to use a fairly easy to learn color-shifting tool to either paint your whole car one color, or like Forza, go part-by-part. The decal editing function allows you to do about as many twists and turns with things as that series — but it doesn’t give you the selection. Still, it’s not very often that many games have even had a decal editor, despite Forza 1 showing how much more replay value it could add to a game nearly a decade ago. Multiplayer racing is a lag-free joy, and allows you to race on any track you want to without lag with either friends or random folks online. Races can be both large and small, so if you just want to tinker around in a low-risk race, you can. You don’t have to worry much about having a high skill ceiling to start with here, and anything that makes a game more user-friendly without hurting the experience is fine by me. 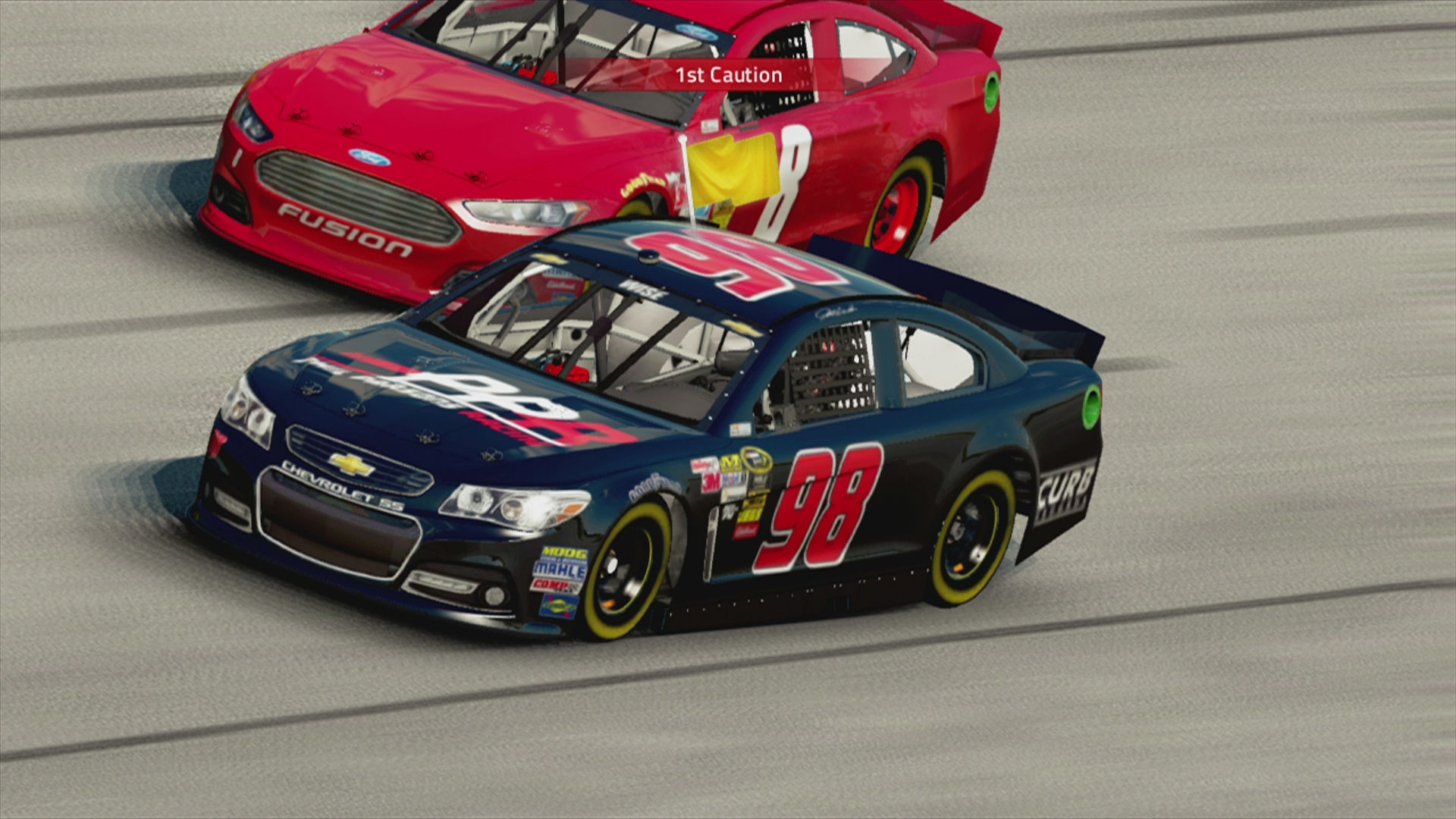 The graphics are largely good. While the crowd is largely impossible to see because they’re just a bunch of generic blobs, it’s actually more pleasant to look at than Forza 5‘s bizarre trackside people. Most of the time, the cars themselves look solid – although when you zoom in during the paint editor, you’ll notice some really nasty-looking textures on the headlamps and logos.In races, you’ll never notice these things and you can instead focus on the sea of vehicles in front of you. NASCAR ’14 isn’t the most beautiful game on the market, but it is fairly impressive with 40+ cars on-screen at once and a full TV-style presentation with special effects before a big race. That’s something you don’t usually get in a racing game, and it helps this one stand out a bit. Car damage is impressive, with a lot of paint chipping and scraping evident – although major crashes don’t seem to do as much damage as one would think they should. Crash replays can also have a weird smoke effect that makes logical sense, but doesn’t look correct to the eye based on when it shows up and disappears on the cars.

The soundtrack is full of music from groups that strive to reach the lofty heights of Rage Against the Machine or Lynyrd Skynyrd  garage bands. Both rock and Southern rock fit NASCAR well, but not in this form. None of the songs are very good, and the soundtrack just makes you want to play something far better. Luckily, it’s only menu music and nothing plays during the races. There, the sound design gets to shine as a result. Without distracting tunes, you can hear the smash of the cars against each other, and the roar of the engines. Unfortunately, those sound a bit muffled compared to how you’d imagine them sounding. They should sound booming, and wind up being a bit like large vacuums set to the loudest setting. One thing the audio does very well in convey information via your crew chief, which actually does add a layer of authenticity to things and is also quite useful since you can figure out where rivals are just based on audio and nix the screen-filling HUD if you so desire. 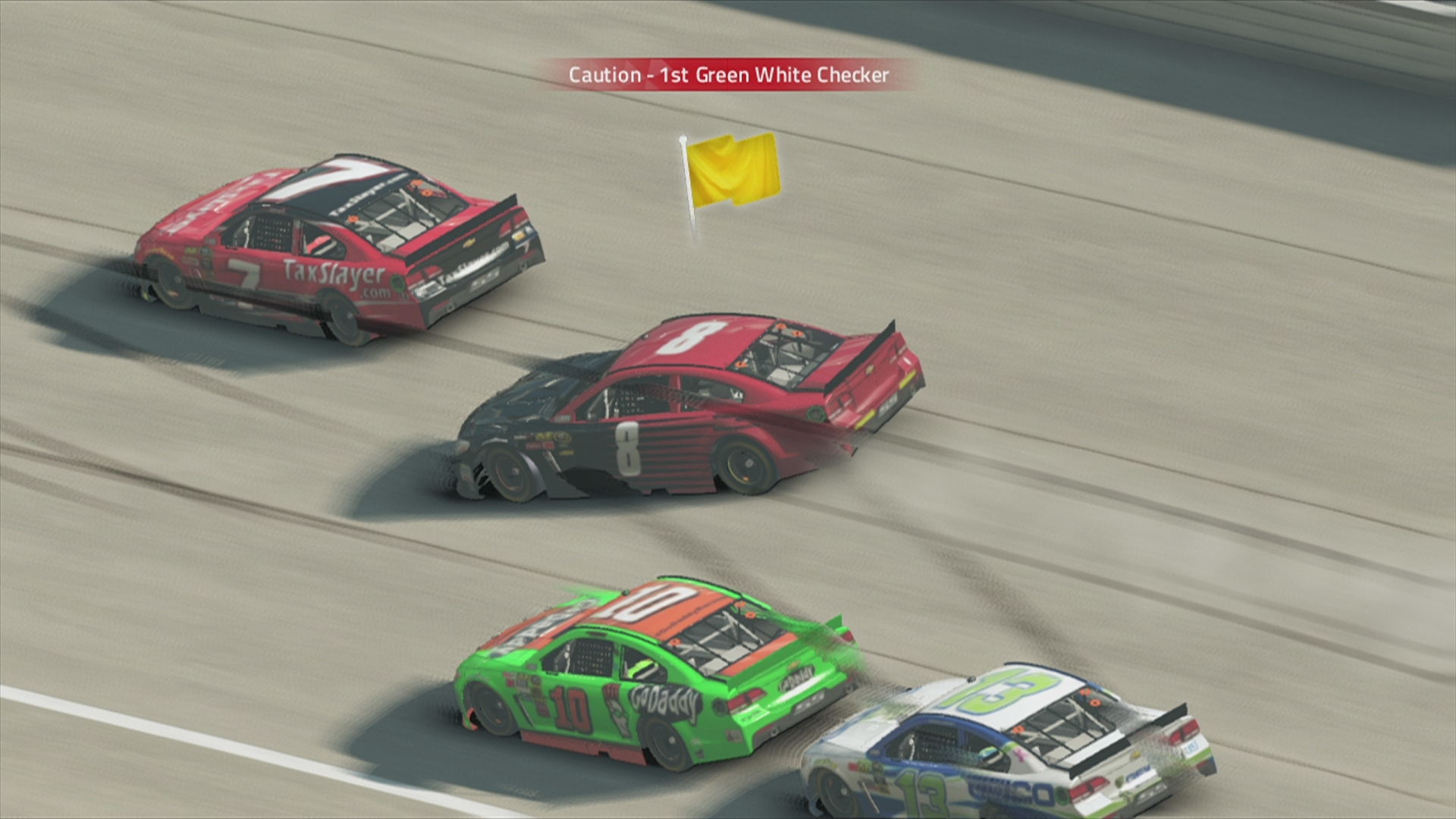 NASCAR ’14 offers up a solid racing experience, and should be a satisfying pickup for fans of the sport. Casual fans may want to wait for a price drop, but die-hards will easily get $50 worth out of — especially with DLC coming monthly that updates everything to the current season. There’s a lot of fun to be had in the career mode tinkering with settings and getting things just right for a race, while the core racing action is quite exciting in any mode. The soundtrack is terrible, though, and the engine roars lack oomph. There are also some iffy visual issues that don’t make the game as a whole look bad — just unpolished.