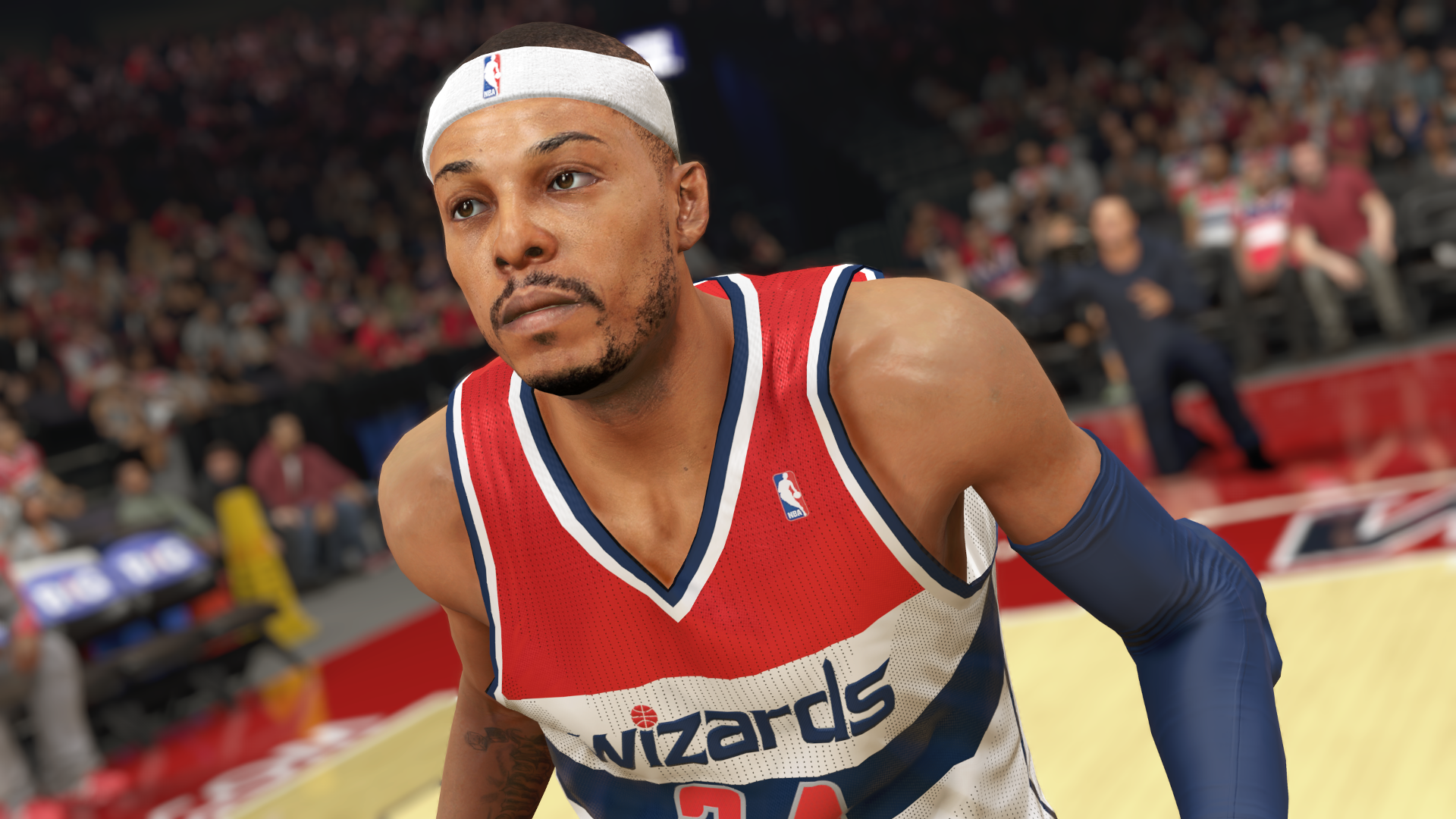 The NBA 2K series seems to be the one annualized console franchise that avoids all of the negative criticism that comes with releasing a game every year. Whereas Madden, EA’s NHL franchise, Call of Duty, and Assassin’s Creed often find themselves at the wrong end of staleness jokes, NBA 2K finds a way to make subtle, smart tweaks to its already rock-solid formula. While the newest iteration of Take Two’s outstanding basketball simulation series, NBA 2K15, doesn’t necessarily reinvent the wheel, it finds a way to make an already stellar product even more immersive.

While NBA 2K15‘s core gameplay is essentially the same as NBA 2K14‘s, a few important tweaks have been made to add to the experience. Most notably, a shot meter now appears around half of the circle surrounding a given player’s feet, making it easier to accurately time shots. Previously, users essentially had to learn the specific release point of every NBA player’s shot if they had any hope of attaining high shooting percentages. This often lead to incredibly frustrating moments, as certain players (cough cough Shawn Marion cough cough) had bizarre shot techniques that were all but impossible to predict. Upon beginning a jump-shot in NBA 2K15, a small semi-circle fills up based upon the time the square button or right stick is held. The goal is to end the shot command as close to the notch in the center of the meter as possible. This mechanic will be easier or harder based upon the spot a player shoots from, his individual tendencies, his balance, and the defense in front of him. It’s a welcome addition to the franchise, as learning player release points is more intuitive than ever before. 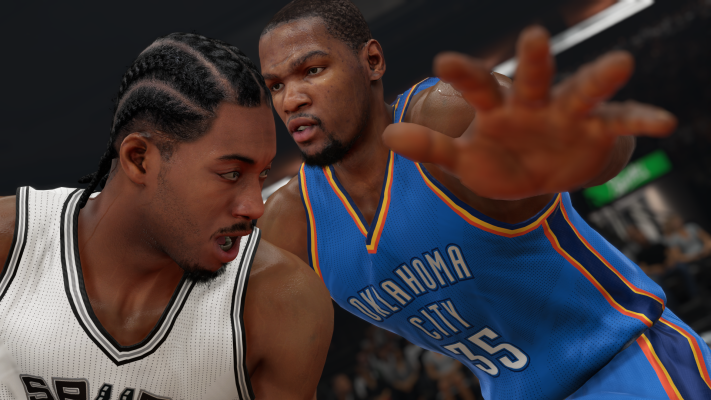 Two of the most infuriating gameplay issues of NBA 2Ks past appear to have been remedied. Gone are the days where NBA players will inadvertently dribble the ball off of their feet, leading to awkward turnovers at inopportune times. While steals and misplaced dribbles are still possible, after all this is a basketball simulator, unrealistic turnovers are all but eliminated. In previous iterations, the popular 2K camera angle caused fast-breaks to end due to jarring camera switches. Because this angle places the camera behind the player, a 180-degree turn takes place during every possession-change. This would be especially troublesome when one was trying to run in the open floor, as the camera turn would cause ball-handlers to run backwards for a split second (due to the user not switching left stick directions fast enough). After spending hours running fast breaks in NBA 2K15, it’s a joy to report that this bizarre issue has never arisen.

Those who have played NBA 2K‘s MyCareer mode know that it’s the closest thing to a professional sports RPG available on the market. NBA 2K15 takes things to the next level with a more gripping back-story, an increased number of cutscenes, an easier to comprehend player attributes system, and more dynamic dialogue options. . Instead of playing the non-existent Rookie Showcase, a single extended exhibition game that determines where one’s MyPlayer is selected in the draft, players go completely undrafted. Gone are the days where one is forced to play for a team that he or she hates before forcing a trade to a new team in blatantly unrealistic fashion. After nearly half of the 2014-2015 NBA season is over, players have the opportunity to choose a team to try out for, each with various performance goals based upon that franchise’s needs and interests. Better teams will be harder to earn coveted 10-Day contracts for, and vice versa. Working one’s way up from the bottom provides better context for every moment in MyCareer, thus making one of the strongest single-player modes in all of sports-gaming even more immersive. 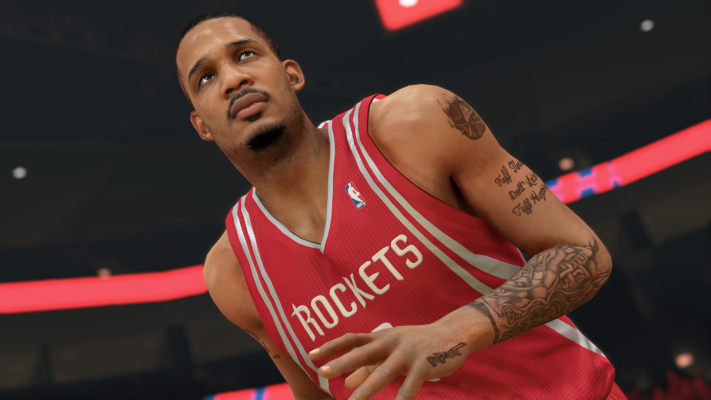 Traditionally, MyCareer upgrades were divided into countless individual statistics, each costing an arm and a leg to increase. This forced players to upgrade only the statistics that translated into tangible statistical success, such as 3-point shooting and speed, to gain more credits in the future. It was generally far more logical to create a superb jump-shooter and have him score 35 points per game than it would be to create a player who was generally good at everything. Rather than repeat this process, players now have the ability to increase groups of statistics incrementally. You can still build that superb jump-shooter, but his shooting ability won’t be limited to just three-pointers. Likewise, attributes affecting defense, play-making, inside shooting, and athleticism can all be upgraded in groups, thus making it simpler to create an all-around superstar. A significant amount of game experience is still necessary to obtain the credits necessary for significant progression, but this easier-to-understand system allows players to grasp NBA 2K15‘s role-playing mechanics at a quicker pace.

While MyCareer mode has always focused on inserting role-playing elements into single-character NBA action, NBA 2K15‘s addition of a number of unique cutscenes has elevated the entire mode. From interactions with one’s overly-excited agent to conversations with general managers who don’t care about anything other than your on-court production, these scenes break up the constant grinding that comes with playing dozens of games in a row. While some of the voice acting is comically obnoxious, most notably that of your veteran mentor (in my case, Pelicans Shooting Guard Eric Gordon), it’s nice to see a sports title attempt to expand its horizons. Sure, there are times that a given character will sound like a sophisticated version of a PC speech-to-text program, but these moments wind up being more humorous than unsatisfying. In fact, some of the MyCareer voice acting is so ridiculous that it actually elevates the entire mode through its insane level of PlayStation-era campiness. 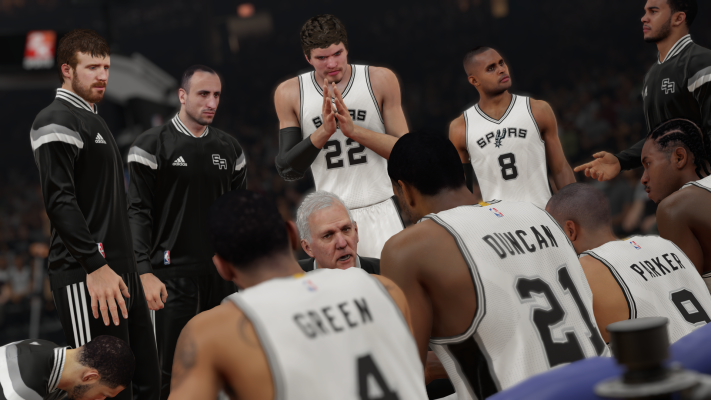 While the technology is far from perfect, being able to scan one’s face into the player creation editor is a welcome addition. After going through an arduous process involving pain-inducing head turning, NBA 2K15 is able to use images gathered through one’s PlayStation Camera or Kinect to create a virtual rendering of players in a matter of minutes. Scanning one’s face might take a few minutes and a series of attempts, as it’s disappointingly simple to have one’s head exit the designated scan-zone, but the end result is definitely worth it. Though one’s virtual self won’t look exactly like him or her from up close, the resemblance from a distance is uncanny. It should be noted that the Internet is abuzz with horrifying face-scan nightmares, so be warned that your character might end up looking like the lovechild of an orc and an ashtray. With a proper scan, players will feel like they’re actually a part of game action, thus making each moment all the more enthralling.

A number of fan-favorite modes have returned, allowing every player-preference to be met. If you’re not a fan of only playing as a single player, but still enjoy the RPG-esque mechanics of MyPlayer, simply hop into MyGM. This phenomenal front-office simulator gives players the chance to play full NBA schedules in five-on-five fashion, all while accomplishing various owner goals. This mode is largely unchanged from NBA 2K14, but the old adage about not fixing what isn’t broken applies here. MyLeague allows users to simulate full NBA seasons or postseasons with their favorite current or past teams (or Fantasy Draft creations), thus allowing those who don’t care about proper cap management a chance to win the Larry O’Brien trophy. MyPark gives players the opportunity to take their talents to the streets in a number of smaller online playground matches. There’s absolutely something here for everyone, but NBA 2K15 hasn’t been flooded with unnecessary fluff. 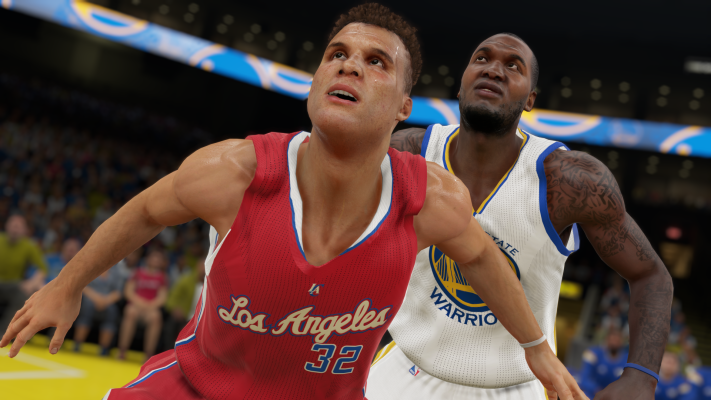 NBA 2K15‘s presentation is even more stunning than the gorgeous current-generation version of NBA 2K14. A number of the bizarre player models that sullied last year’s beautiful leap into the future have been improved. That’s right, we no longer have to pretend that big-headed Cody Zeller doesn’t look horrible. Player uniforms seem to have more life to them, reacting dynamically to a player’s direction and speed. Beads of sweat appear to reflect off of the arena lights, making every player appear far more real than ever before. Other sport-title developers should take note: this is how a current-generation sports title should look.

Though NBA 2K15‘s gameplay is tighter than ever before and its visual quality has never been higher, there are a number of buggy anomalies that sully an otherwise spectacular product. None of these bugs do anything to hurt how NBA 2K15 is played, but it’s still unfortunate to see this many visual glitches appear in a major title. Sideline interviews are completely drowned out by crowd noise, leaving users to watch an awkward display of awful player lip syncing and sideways head twitching from Doris Burke. Random opaque blue dots frequently appear on the screen during in-game replays. Players’ arms will frequently clip in and out of their jerseys. The camera will sometimes pan inside of players during huddles, thus rendering bizarre hollow human shells. Perhaps most humorously, Miami Heat Forward Josh McRoberts’ hair occasionally wiggles back and forth during timeouts. A lot of these graphical mishaps bring back nostalgia for the days when glitches added entertainment value to games, but in 2014, they’re awkward at best. 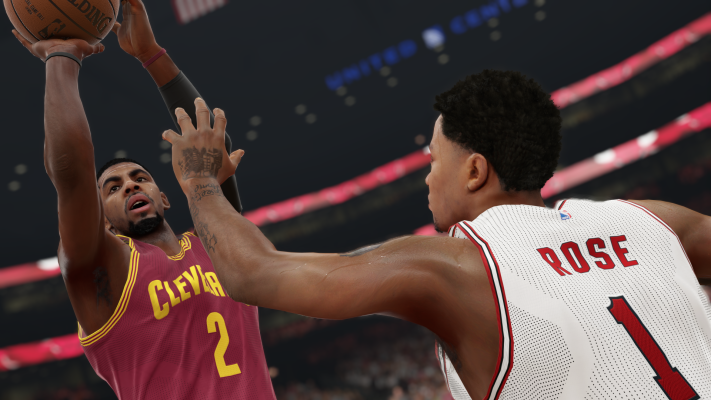 The NBA 2K series continues to deliver the best professional basketball experience available on consoles and PCs. Though some strange visual bugs might rub a bit of shine off of an otherwise excellent package, there’s no denying how well NBA 2K15 plays. No game mode seems like it doesn’t belong, as every player should be able to find something that he or she adores. By improving both the shooting system and the RPG-esque MyPlayer mode, NBA 2K15 has taken the next step towards becoming the ideal sports game. You may not ever be able to run pick-and-rolls with Anthony Davis in real life, but you’re closer now than ever before.