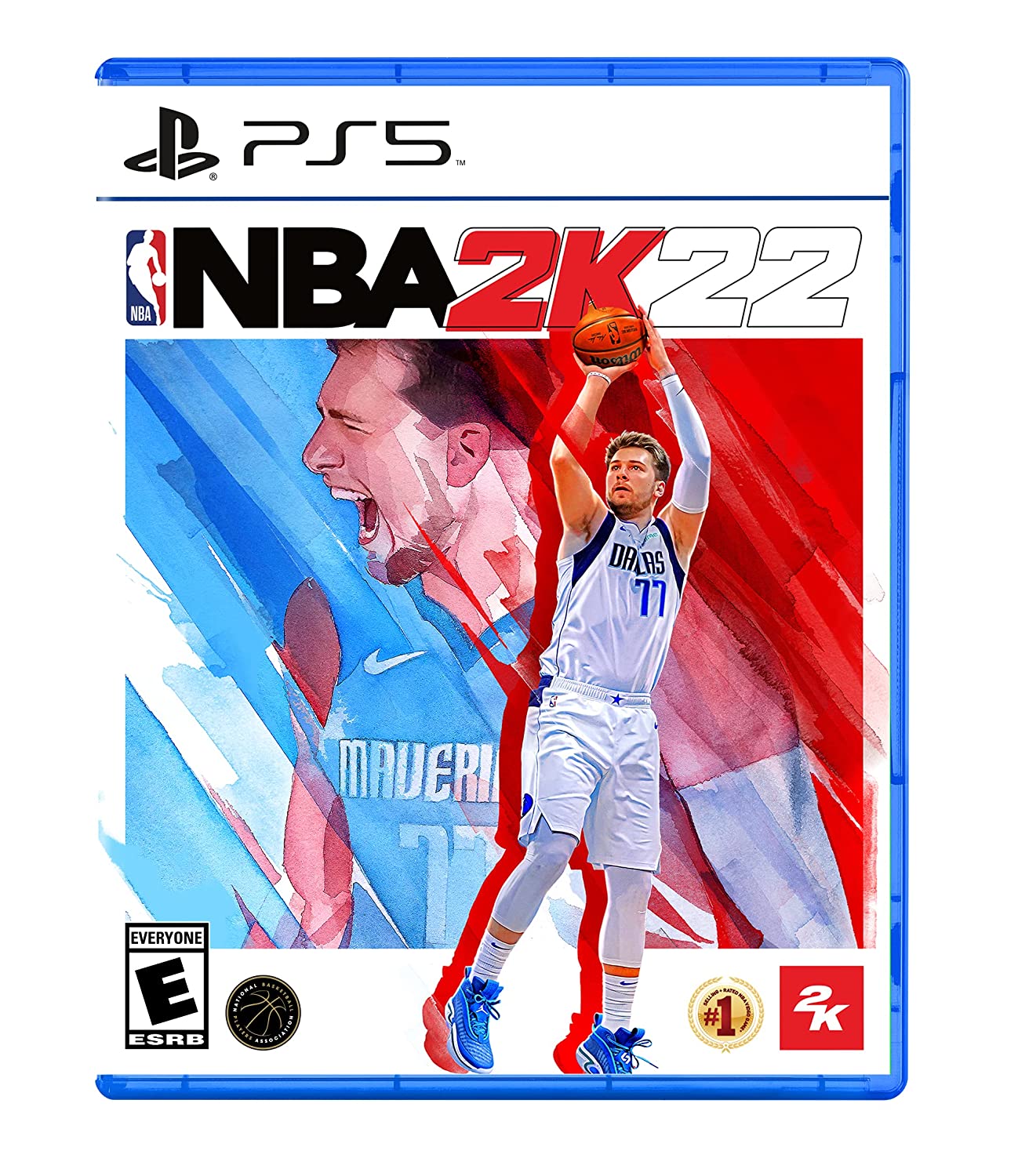 Coming off of an impressive debut on the PlayStation 5 and Xbox Series consoles, Visual Concepts is gearing up NBA 2K22 to build on the initial current generation success. With offering a ton of basketball aspects to get involved in, the game remains geared towards grinding on the specific mode of your choice, whether it be MyCAREER, MyTEAM or MyNBA. Visual Concepts have touted some major overhauls to gameplay for the latest release, and while at its core it still remains the animation-dependent game that is, some of the changes here are fantastic. There are legacy issues that still remain, however, and the overall experience remains consistent with last year.

A big talking point with last year’s game was the inclusion of the shot meter, which made shooting ridiculously difficult and inconsistent with no way to disable this. This year, the shot meter returns and still remains an issue with consistency. You are better able to see the meter, but the green zone adjusts on the fly and it remains frustrating to land shots with competent players that should make them. Visual Concepts has added the option to disable the shot meter, but there’s no content as to when a good time to release the ball is. Playing on a lower difficulty will help guide players to better shooting, but this can’t be set online with MyCAREER or MyTEAM.

The experience is even worse if you’re using bench players in a game as they never seem to land anything even if directly under the net. NBA 2K22 does take every single player percentage and rating into account with how covered they are on defense, but even hitting the green zone with someone rated 85 with energy will still give a missed shot. Consistency is major issue with the game as you’ll go through stretches of good and stretches of bad, but it doesn’t feel natural. 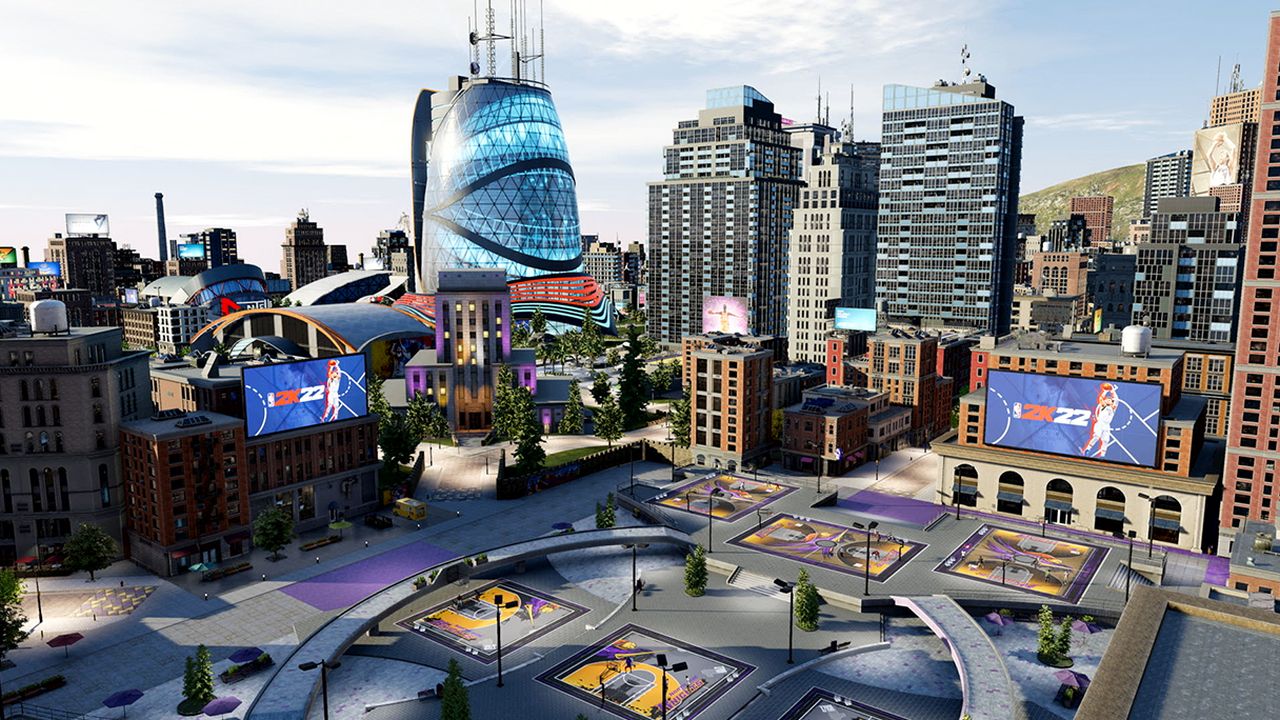 The team has included even more animations for dribbling and Pro Stick moves, including 50 new signature from both the NBA and WNBA. Aggressive dunks and alley-oops have been included for those with dominating statistics. Thanks to the animation-dependence of the game, pulling off combos almost feels like you’re queueing up the animation. It then takes too long, you’re locked into it when you would have a window to break away from the defender, and inevitably have to back out. On the other hand, I’ve had some actual ankle breakers where the defender just flops. This is the story of NBA 2K22, as it can be really enjoyable and equally as frustrating.

What is absolutely fantastic are the changes to the defensive side of the ball. Shot contesting has been overhauled and NBA 2K22 actually allows you to play defense and have a say as to what the offensive is doing. This is no doubt “Block City”, as going up and defenders players in the paint is so satisfying. Matching up with the AI or other players offline on defense, matches up fairly well. With the PS5, the adaptive triggers come into play when playing defense, but not sure it ultimately amounts to anything as it doesn’t always activate when providing pressure. The other aspect of the defense comes down to the AI, and it plays extremely strong almost to a fault at times. It wasn’t too often I could do a Pro Stick combo to try and beat one of these defenders one-on-one. Pick-and-roll really becomes your friend and you can only hope the AI doesn’t take a charge or intercept the pass in the paint. Last year, Visual Concepts implemented the ability for fast guards to beat their guys around the edge, but this has promptly been stopped in its tracks. 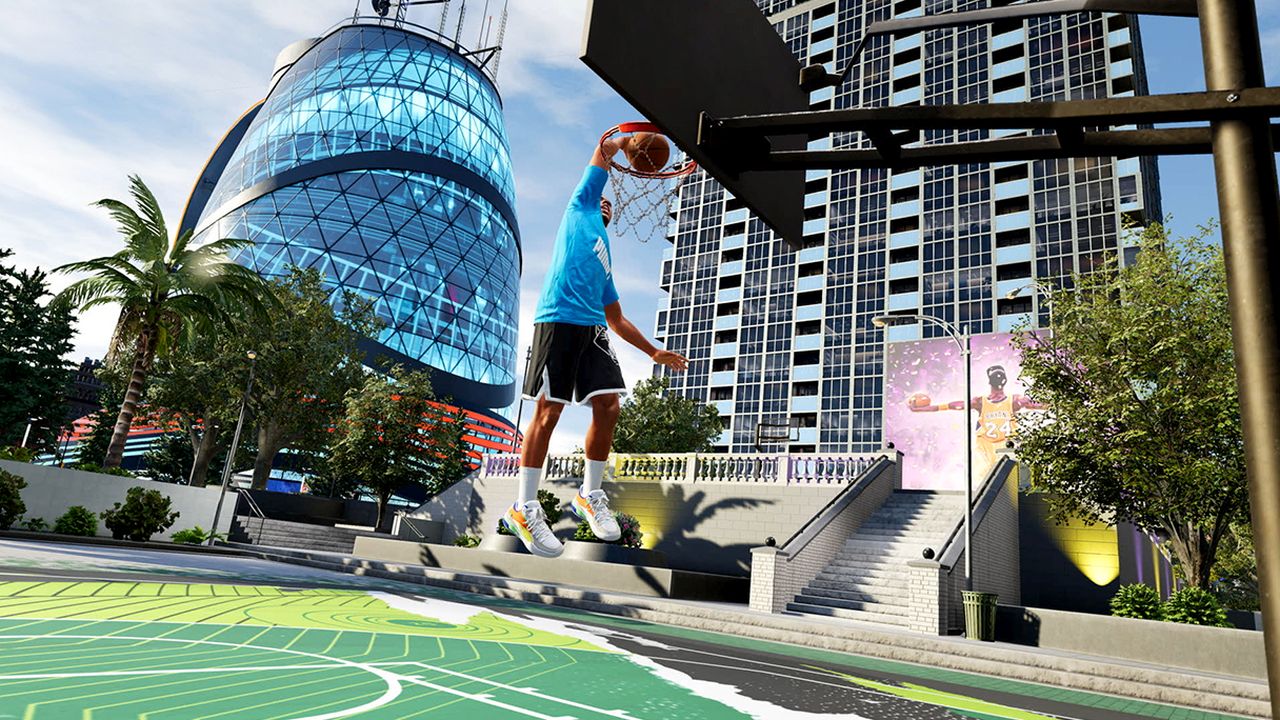 The City returns for MyCAREER and MyPLAYER in NBA 2K22 and it’s a much more lively area with more NPC’s. Straying away from a narrative script, MyCAREER now embodies quest missions to accrue MVP points. The City is on the current generation of platforms, whereas The Neighborhood is on the previous generation. You can explore The City and different areas and can use a skateboard or other means to speed it up. The best way to sum this up MyCAREER  would be a Grand Theft Auto design mixed with a Second Life simulation. It’s more than just the basketball this year as you work on a hip-hop career, being a fashionista or more. I like the idea of going more with quests rather than a forced narrative when you’re trying to just upgrade your player, but the overall experience in the city is slow and sluggish. Some load times due to connection requirements can be putrid. I’d rather just focus on balling out and getting my badges full.

As for the gameplay in The City, you will still find courts and wait for games to finish. Unfortunately, the issue still exists with input lag on moves. Lots of these games can be complete messes with players jumbled up in the middle and with having to use the shot meter, makes shooting even more difficult than offline. Players tend to grind to figure out their shot timing on the meter as most of these games will have one person hog the ball and just shoot from the perimeter. It doesn’t end up being very fun. It’s also worth noting using VC to upgrade your player seems to cost more, or you’re just getting less. The end result is even more grinding, but the inclusion of quests will make you believe this is all spread out. The fact that Jake from State Farm is in The City is more proof that the product placement is completely out of control. 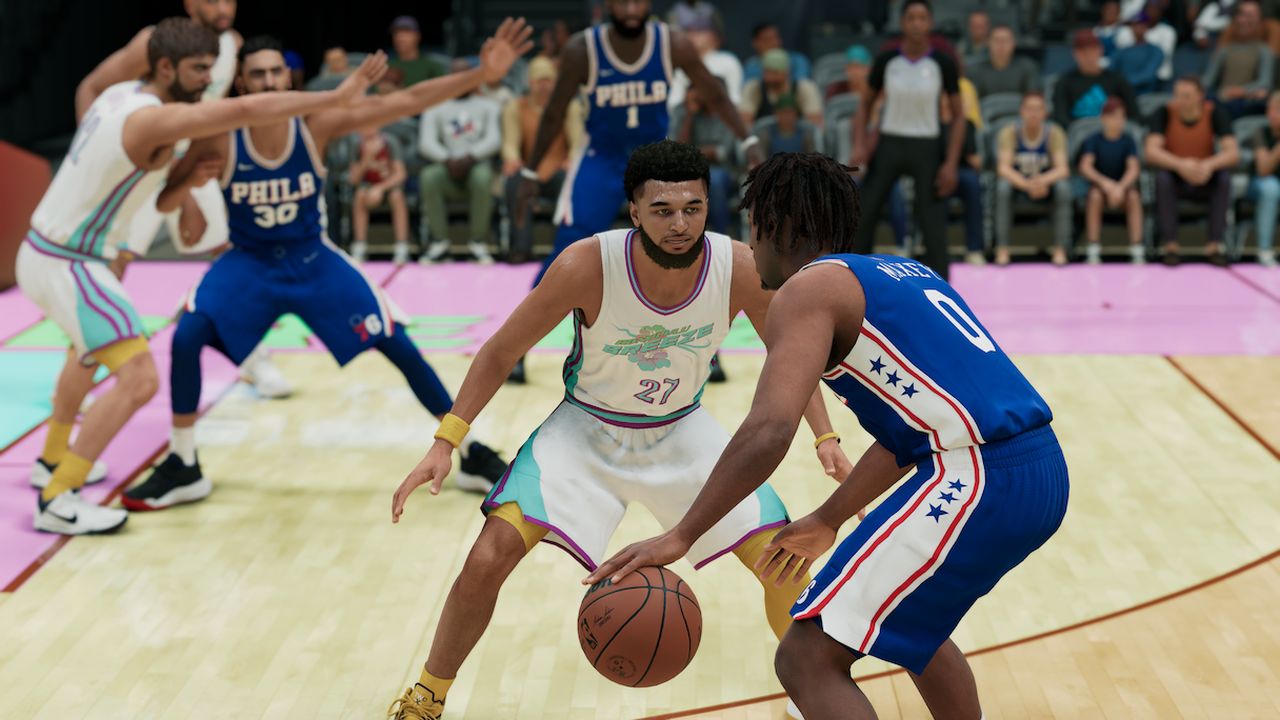 MyNBA allows for both a NBA and WNBA campaign this year with a lot of suitable changes coming to this game’s version of a Franchise/Owner mode. MySTAFF is a new aspect that has been included for MyNBA as you can focus on a coaching carousel around the league, but more importantly, hire or fire multiple coaches that provide boosts in areas. You can hire scouts, athletic trainers, and specific coaches such as perimeter defense or post offense coaches. This does take away from the budgets and this is an aspect that is better experienced going throughout a season. Players can also have a mentor selected for the badges so that player can inherit those badges over the course of a season. The flow of the screen in MyNBA is still pretty confusing and this could use an overhaul. Adding custom players is a pain and having to go into a coach gameplan just to set the depth chart based on minutes is annoying. There still isn’t enough to fully invest you in the league storylines outside of the tiny text on the social media page. Lastly, you can also add one of three pre-setup expansion teams for the league, and that’s pretty cool.

MyTEAM still brings allows you to spend money on card packs to bolster your team as Seasons make a return this year. If grinding in this way is your thing, there are plenty of new challenges to go with the on-going seasons to keep getting better cards. There is a new draft this year that allows you to take draft a team and play against someone online. This can almost be a trial for cards on the market, but the issues with playing with the input delay online hurts this, as well. I also noticed the shot meter was required even on layups? This is a nice change to MyTEAM though, and I actually do like this mode just for the single player aspects of the three’s online. If you’re not trying to be competitive and just enjoy a team you’ve put together, it’s a great change of pace. 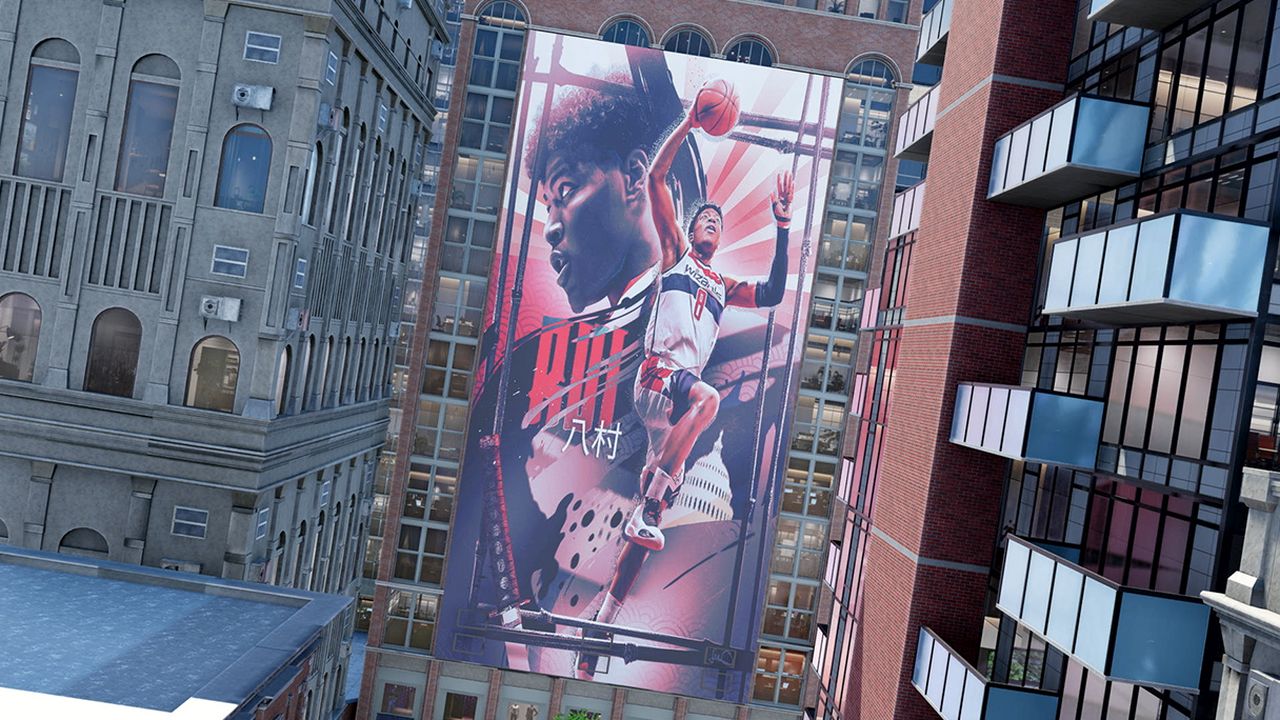 It’s fair to say that NBA 2K22 has the best visuals of any sports game on the market at this point. The lighting seems to have improved this year as the game feels a bit brighter, especially in The City. Player faces are extremely realistic and it even seems like the coaches and crowds got an uplift on facial quality. Visual Concepts redid the presentation this year and has added a pre-game cut scene, which is really cool, along with a redone halftime show. The score overlays almost feel like a throwback to the 2K games of old. There is still some recycled content in-between quarters along with the interviews. Overall, it still remains the closest sports game to a television broadcast that’s out there.

The audio remains at the top of its game for NBA 2K22. For the soundtrack, 2K will continually add new artists throughout the year to bring fresh artists to player’s ears. The crowd in this year’s game sounds much more alive and if a game gets good between two teams, the arena’s go insane. It creates an amazing atmosphere when that situation occurs. Adding to the atmosphere is the inclusion of every PA announcer in the NBA from each arena. This adds a new dynamic to everywhere you play. Commentary consists of two teams with the main team lead by Kevin Harlan and it’s a nice mix up. 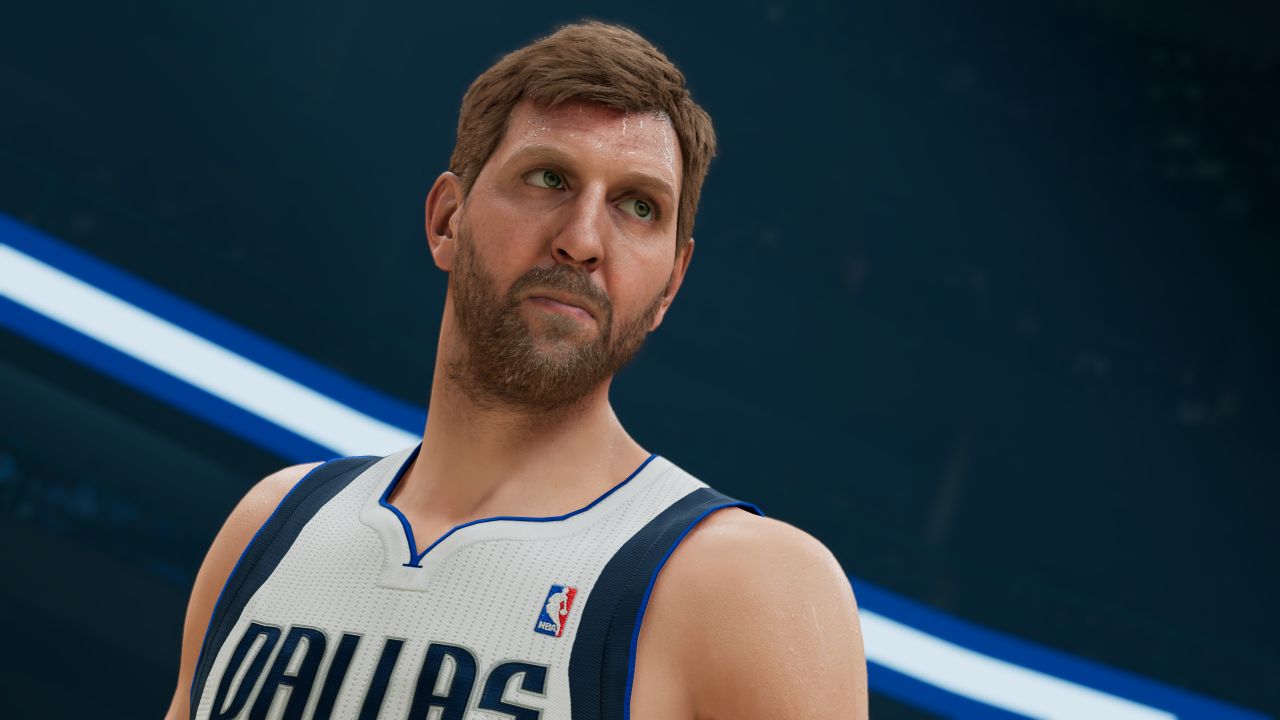 The changes that were implemented for NBA 2K22 are for the better. Changing The City to a quest-based system that can get your player more quickly into action is a positive, albeit the experience is sluggish and slow while navigating The City. Tons of product placement and a quest mission featuring Jake from State Farm is pretty cringey. Playing online with your player still amounts to input lag delays and player spamming threes from the perimeter. MySTAFF being added into MyNBA is a cool new metric that can provide boosts to your teams, along with the ability to do season with the WNBA, adds a bit more to the Franchise/Owner mode. The shining spot for this year’s game is the defensive gameplay and the ability to truly challenge shots and defenders, especially in the paint. It’s extremely satisfying. While a bit of the game remains, NBA 2K22 still offers the closest television experience in a sports video game to date. However, that shot meter is still frustrating as the game remains geared toward its hardcore community who prefer grinding.