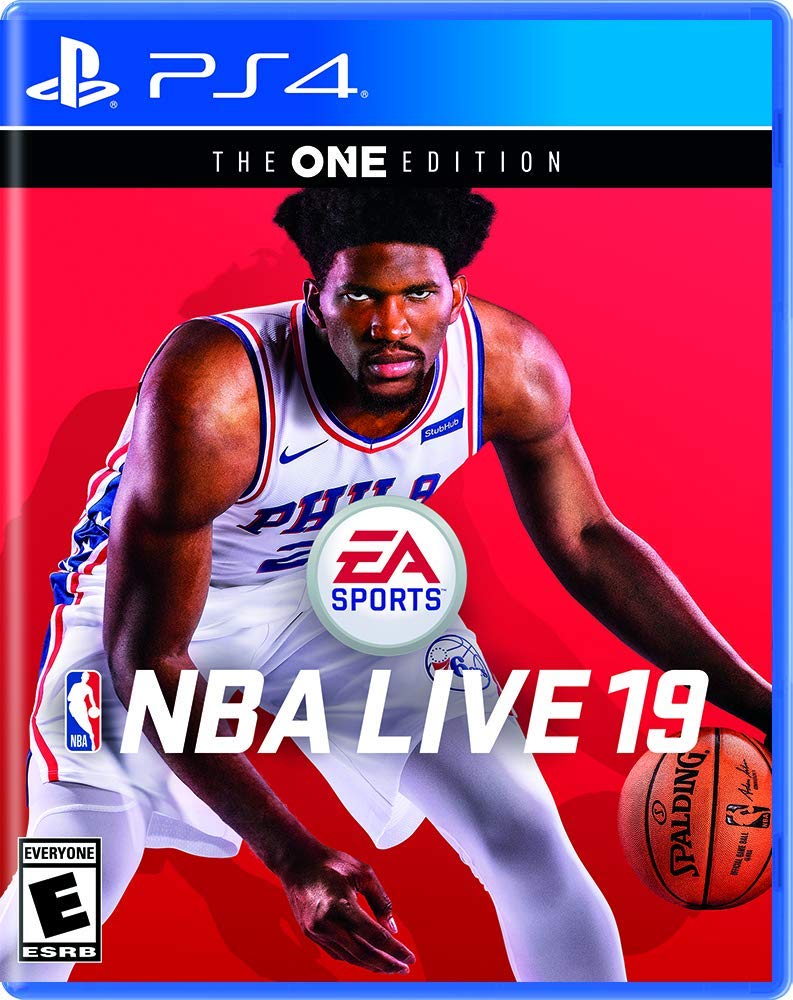 EA Tiburon surprised a lot of people with NBA Live 18 and is hoping to build upon that with NBA Live 19. The biggest surprise was the introduction of the career mode, The One, as players could build and customize their player as they rise to the top of either The League or The Streets. NBA Live 19 continues to focus on this mode in a variety of entertaining ways. Sports gaming seems to be leaning more towards individual career modes, which tends to leave behind the gaming modes that fans have been accustomed to over the past twenty years. With NBA Live 19, those modes have taken a back seat, but what is being focused on is fantastic.

With The One, players have multiple ways of upgrading and playing with their character that is always fresh and never seems like grinding. The team introduced the Icon System this year as it gives your player a direction for the type of player they want to be. Players can have their character work their way towards being the next Vince Carter or Shaq as they build towards a specific style. Players can also create female characters as the matchups include mixed genders. Leveling your player will unlock new abilities, specific dribbling and shooting styles and tons of wardrobe attire that help make diverse players across the world.

The Rise is the tour mode that is the main focus on building your player in The One. Like last year, you aim to either work towards The League or The Streets. The Rise features a narrative that prompt for two responses that are geared towards building your character and give varying results based on the choices you make. This is a nice touch to add and helps compliment the experience. The team also brought on some generic cut scenes from ESPN and YouTube personalities to create hype for your player, but this isn’t dynamic at all. 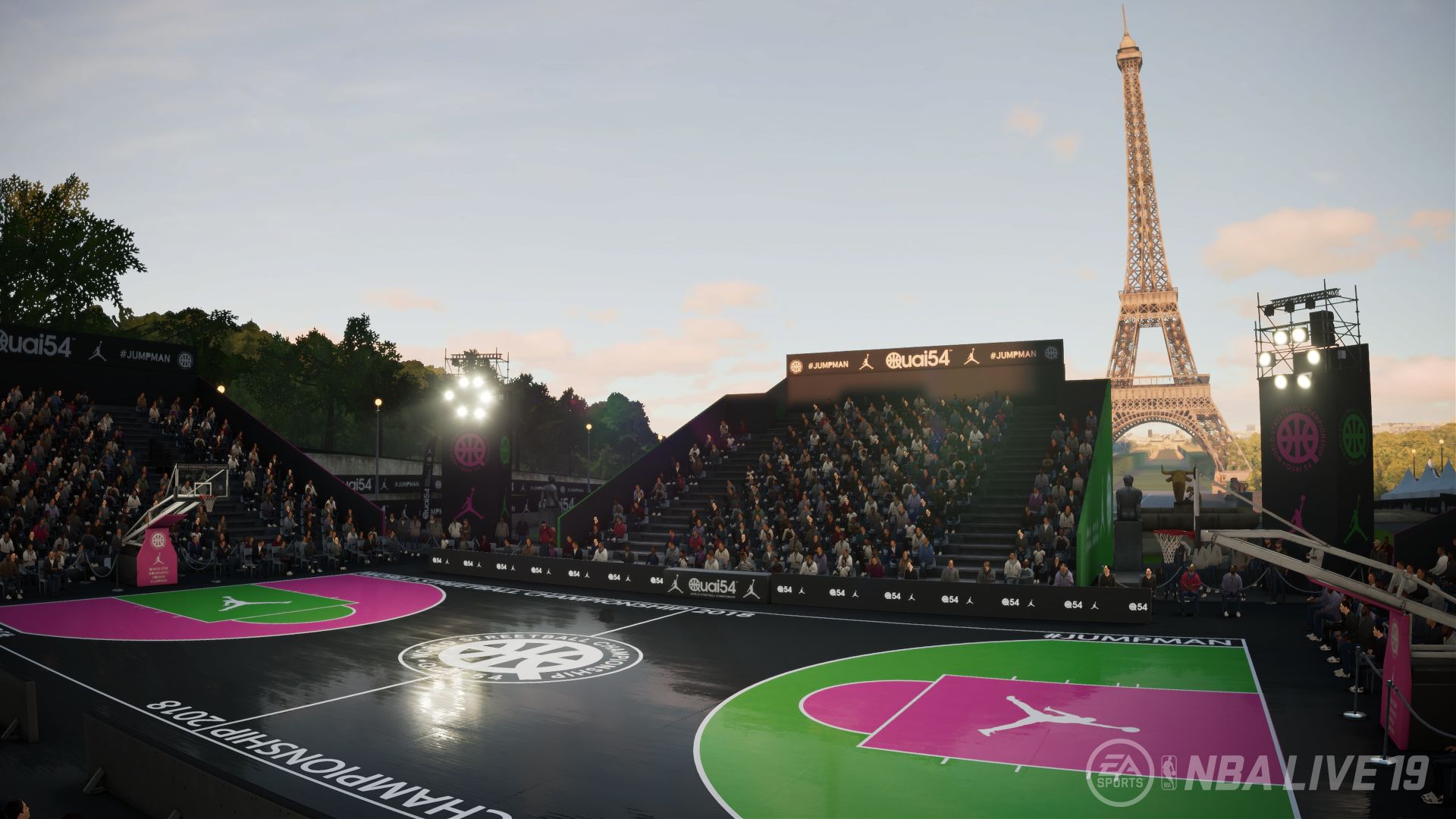 EA Tiburon has also introduced legendary street courts from the likes of the Philippines and Brazil where legendary street ball matches have taken place. These courts are vibrantly replicated and capture a solid atmosphere for street ball. Players also have the ability to create custom courts this year for Court Battles. This is another way to earn Hype and level up your player. You go through a gauntlet of online games to defend your court as you unlock more attire to add to your court.

Playing through The Rise allows for a variation of 3-on-3 or 5-on-5 matchups. Playing a 3-on-3 or 5-on-5 matchup online is a fun and unique experience. You get to see other players’ customizations and mix and match the best lineup to play another team. Similar to a boss battle, you will play against a squad that if you beat the squad, you unlock that specific player. You will build your squads for play and get better players over time so you can create the ultimate matchups to use. Each player in the game has a specific type of style, which goes back to the Icon System that has been introduced. All of this couples together for a varying gameplay experience that never feels like a boring grind. 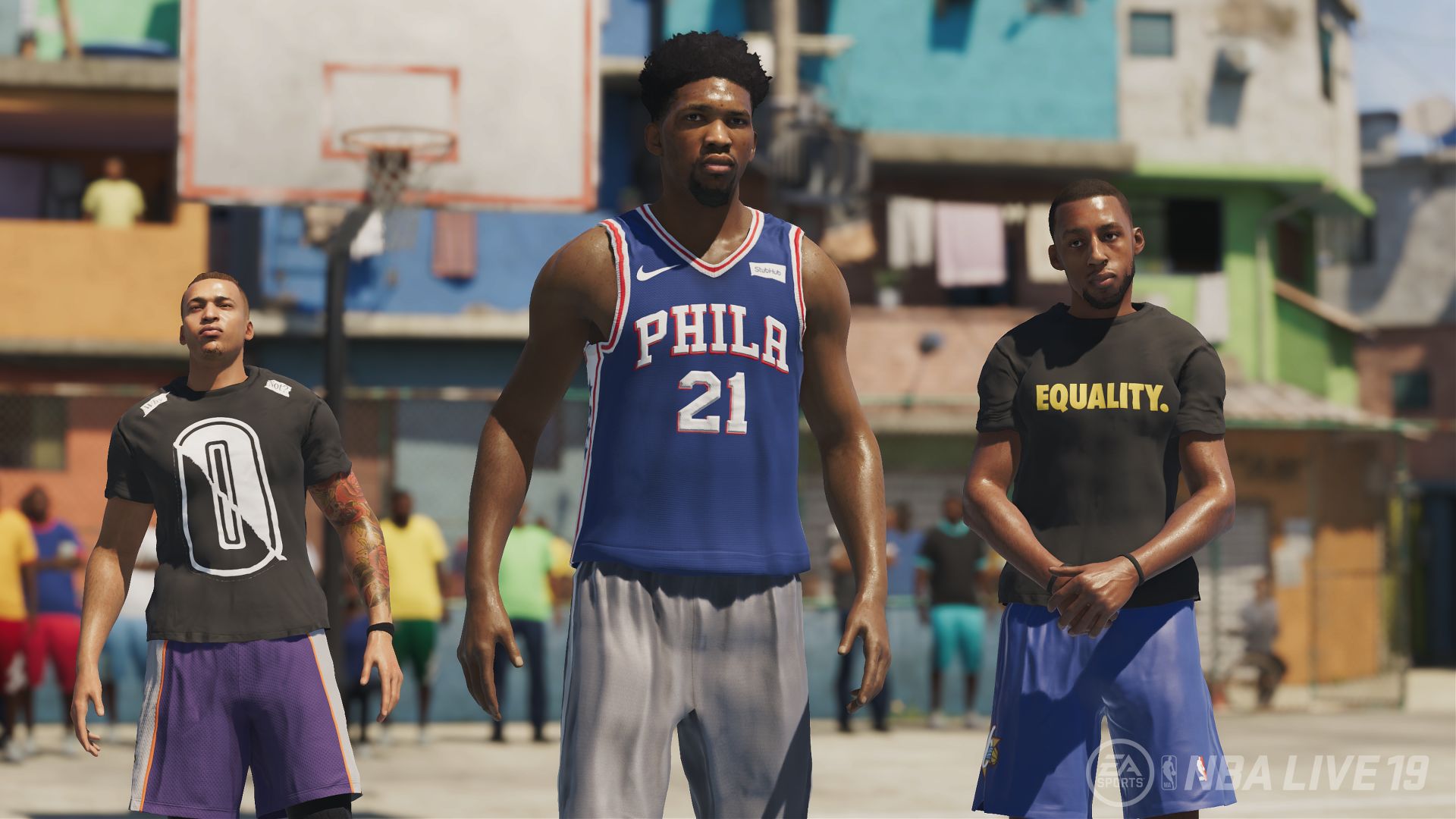 As for the actual gameplay of NBA Live 19, the overall feel has been improved thanks to the Real Player Motion system. The game feels much more fluid this year and dribble animations feel consistent. Players can pull off varying moves with the right stick to try and get by defenders. Player models will interact with objects off the court including under the rim and the bench. There are, however, still a few shortcomings with how the game plays on the court. I have seen some unnatural dunk or layup animations from way out that feel like the player warps. Additionally, the AI seems pretty content with standing still once a they have finished finding their location on the play called. There isn’t must attempt at trying to get open or physical interaction to try and get a better position. Shots are still taken with a shot meter, but there is no way to judge how long to hold down the shot button on a lay-up, which causes misses from even the best players.

Visually, NBA Live 19 is still stunning. Player models are extremely lifelike and the arenas truly come to life with vibrant scoreboards and a detailed crowd. NBA Live 19 is also the only EA Sports game to make the most out of the official ESPN broadcast license, which is solidly implemented with the theme song and stats. It truly does feel like a television broadcast at times. One visual aspect the series is still lacking is HDR. The team forgone jumping on the Frostbite Engine and it makes you wonder just how well these arenas and players would look if it had HDR. 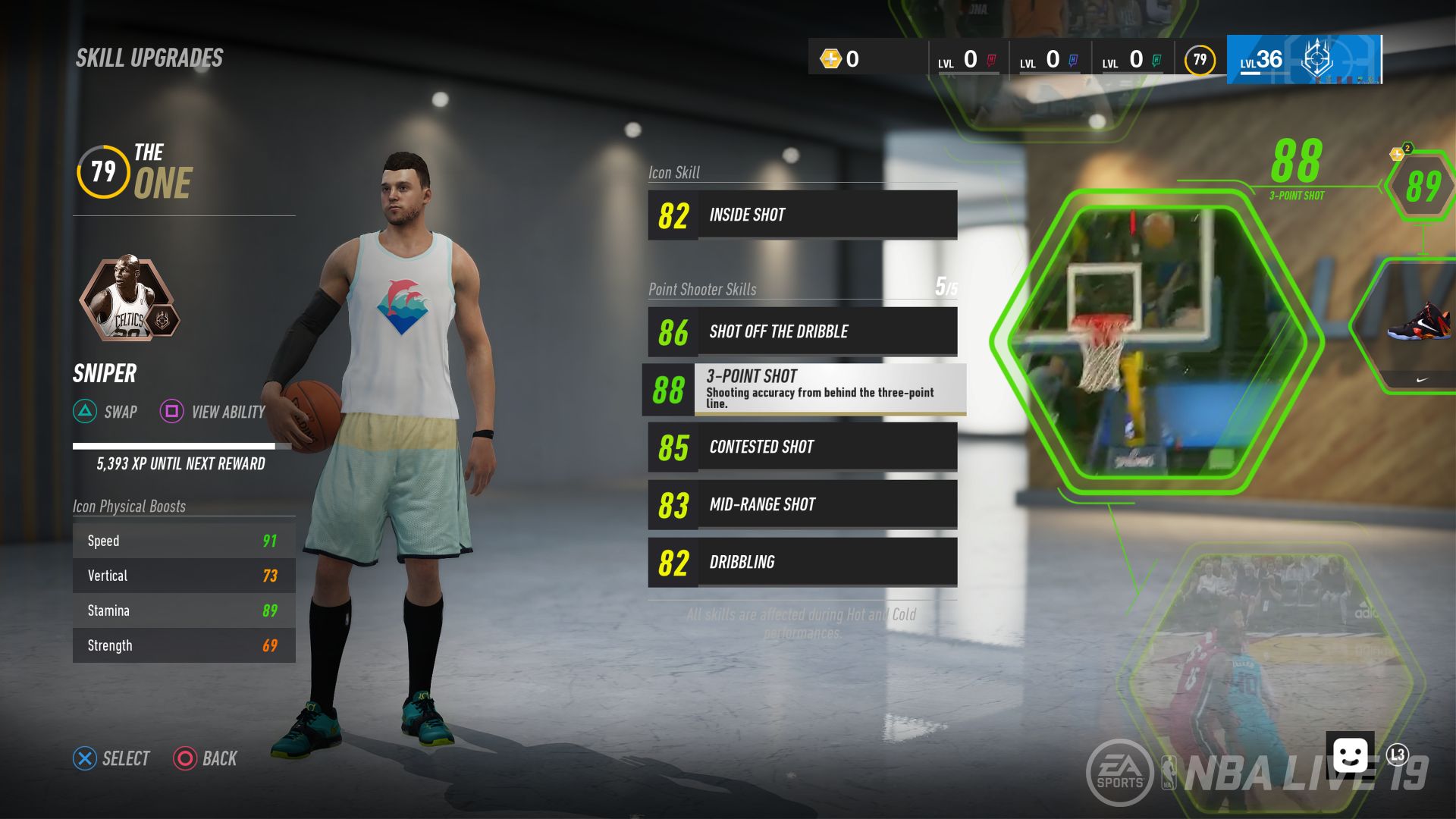 There’s a new commentary team in this year’s game, but the two don’t stand out. Ed Cohen, voice of the New York Knicks, and Bull Jay Williams, a former Chicago Bulls player, are flat and not exciting. Dynamic commentary is promised throughout the year, but right now things are fairly repetitive. What makes up for this is the crowd in the game. They are loud and reactive, adding to the atmosphere where these two take away from it. The crowd during a Street game, however, does lack in comparison.

With the name NBA Live 19, you would expect the NBA to be the main attraction, but it doesn’t feel that way. The game includes all NBA and WNBA teams and players, but any mode involving playing a traditional game feels barebones. Franchise is straightforward and while the Icon System has been implemented into the mode, this does take a bit of grinding to upgrade players. Everything is the bare minimum and is largely unchanged from last year as this looks to continue to be a growing trend in the industry. 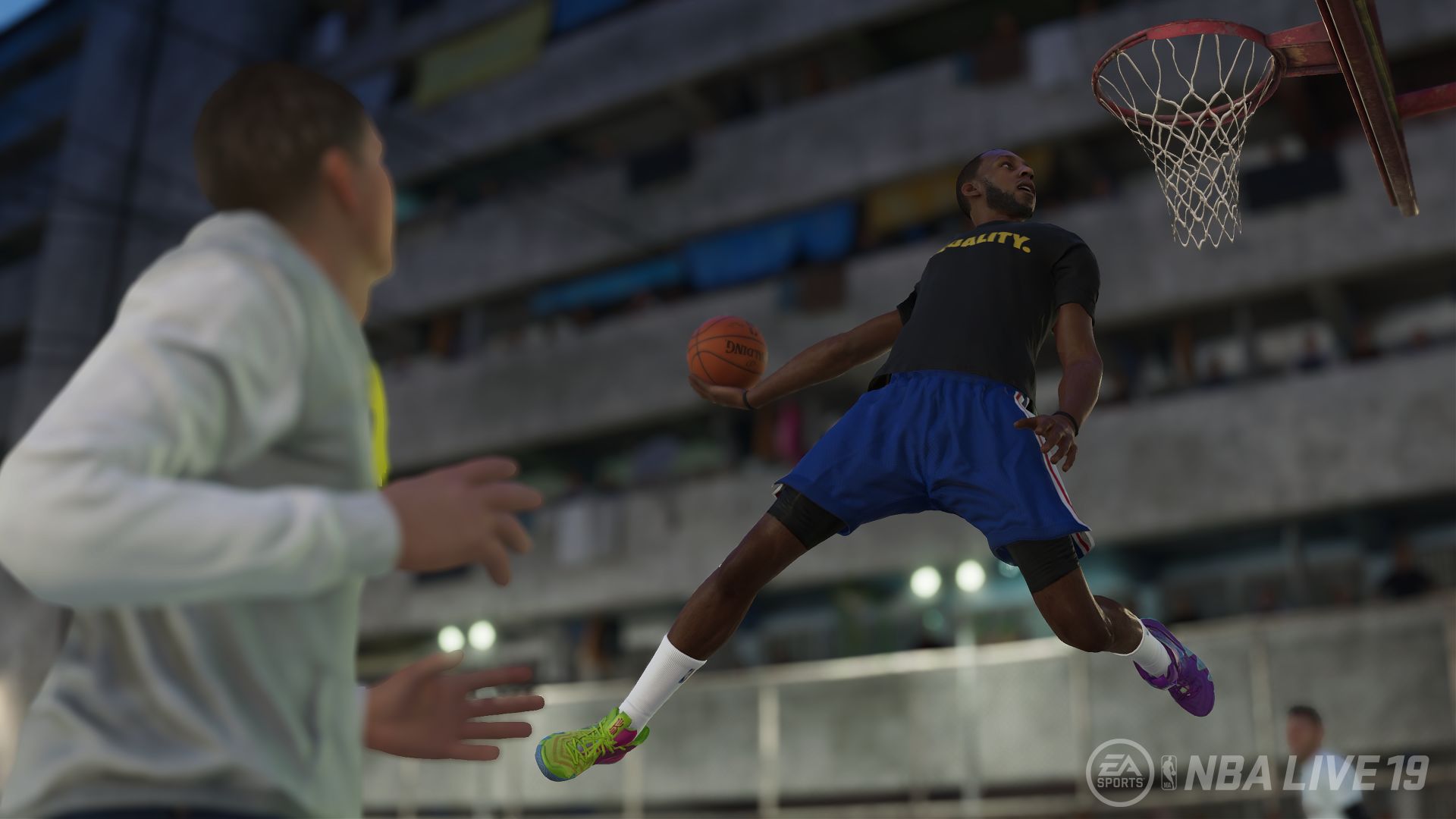 NBA Live 19 continues to trend in the correct direction in terms of overall success. The product on the court plays a fun and excellent game of basketball thanks to Real Player Motion. It might not be as detailed and sim-focused as NBA 2K, but it offers all the options needed to compete. In terms of career modes, nothing touches The One. Varying ways to make your player better while playing online with or against other players is fun. It’s also not behind a micro-transaction wall, either. The One, however, is still where the money is and inevitably is leaving the actual NBA modes an afterthought. Players still want an innovative Franchise Mode.