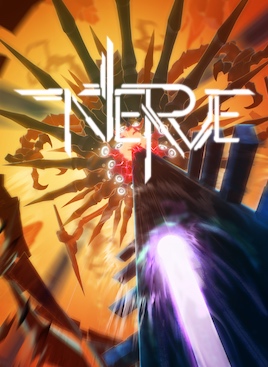 Listing an “enthralling audio visual experience” as one of its key features, it doesn’t take long to pick apart the arguments that developer Gunfish Games put forward in favor of NERVE. While many wouldn’t begrudge a studio marketing their creation in the brightest light possible, it’s easy to see just how broad a definition Gunfish’s own words are applied here. Not because the game — as most on-rails/rhythm-focused releases are by standard — isn’t particularly long in its roughly five-to-six hour length, or that its pseudo-thematic premise of “racing towards your fate” is neither relevant nor needed. But it’s important to recognize what kind of scope a game like NERVE is aiming for and ultimately delivers in its run-time, flowery terminology and all. Tetris Effect this is not. A game that’s sure to get under your skin, the right way? That it most certainly is.

NERVE is better served (by both players and perhaps the developer themselves) when all connotations around an experience are left at the door. Refine one’s focus on it as an on-rails affair whose gameplay is the true defining trait. Toss aside the pretense and acknowledge that the rhythmic connotations that these types of games hold is barely present here and NERVE does have it in itself to spark enjoyment and illicit a feeling that the game won’t best you in its latter parts. Better still, that itch to have “one more go” at that frustrating segment — “no, this time I’ll get it right.” Temper one’s expectations and you’ll quickly find that NERVE doesn’t need the assumption of scale and greater meaning to be an enjoyable romp through abstract worlds.

Thankfully, any suggestion that NERVE is trying to illicit a feeling of a narrative or a theme in its progression is kept well under-wraps, if at all existent. The objective on getting from one end of the infinitely-spanning cylinder you ride down to the other, the only focus the game provides and is all the better because of it. NERVE’s controls too similarly don’t require much to get a simple handle on things in its early parts. Shift left and right to avoid incoming obstacles — jump when you need to, sometimes hold the corresponding command to float for a brief time over triangular spikes. Like all rhythm games — regardless of how integral the music is — NERVE does a good job at keeping the difficulty curve at a steady angle throughout. Admittedly there can be moments sprinkled about many a zone (the game’s term for stages in each of its ten worlds) that feel like an unnecessary “got’cha.” Obstacles and traps tucked so closely behind one another that reaction time is scarce. And given how it pays to take notice of what’s coming up, the close proximity of some moments can unfortunately overstep the boundary. 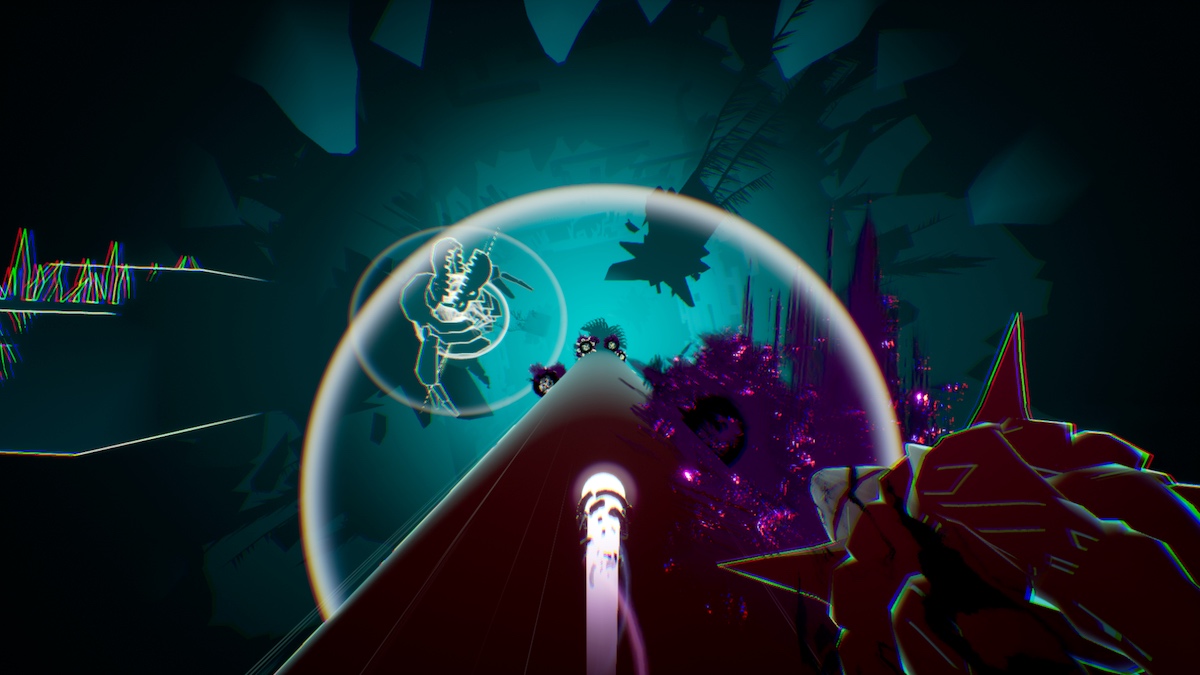 Whether it’s admittance or acknowledgment of sorts for such an approach, the consolation to the game’s abundance of player-deaths is the fact that the timer doesn’t factor in death. Rather, time resets at every quick trip back to the start of each zone. While this may disappoint the more ardent type of player that’s looking for a more grueling requirement to achieve S rank, the flip-side is that NERVE allows you to alter your speed so as to go slower or faster than your sphere’s average rate. Attaining that coveted S rank often requiring you to maintain that quicker pace, which in turn also makes the world around you (and all the many traps that await) increase in speed as well. Another point to take note of is that there are no checkpoints per zone. Meaning that if you die at all in any stage (excluding the end bosses of each world) you’re required to play the whole sequence over. A lot of NERVE‘s design is punishing by default, but justifiably so, not least in the latter half. At a point where most games would usually give up introducing new mechanics, NERVE surprisingly seems more than happy at introducing new tricks and similarly-new methods with which to trip you up, right up to the closing parts.

It’s the second-half especially where the game evolves — on simply being about speed and basic maneuverability — and actually begins to encompass more lite puzzle-solving and strategic thinking on not so much how to react, but when. One example being the introduction of a shield mechanic that protects you from seemingly-unavoidable lasers, yet disables all your other abilities until the shield is removed. One more risk to take note of when hunting down that next illusive S-rank. Another brings to light the ability to “focus,” which slows time down yet still allows you to move as freely as you would at the normal rate. A useful tool which initially allows you to slip past the smallest of gaps, but worryingly begins to feel more like an over-powered “get out of jail”-type ability that undermines a hefty amount of the overall challenge. That concern does fortunately get rectified to a degree with succeeding zones. Those that specifically need one or a number of abilities to counter, not least in the penultimate world that lumps all previously-experienced obstacles together. And can be quite the tense sequence when it requires you weaving, attacking, dodging, timing and deducing one’s movement, all in the span of a few seconds. 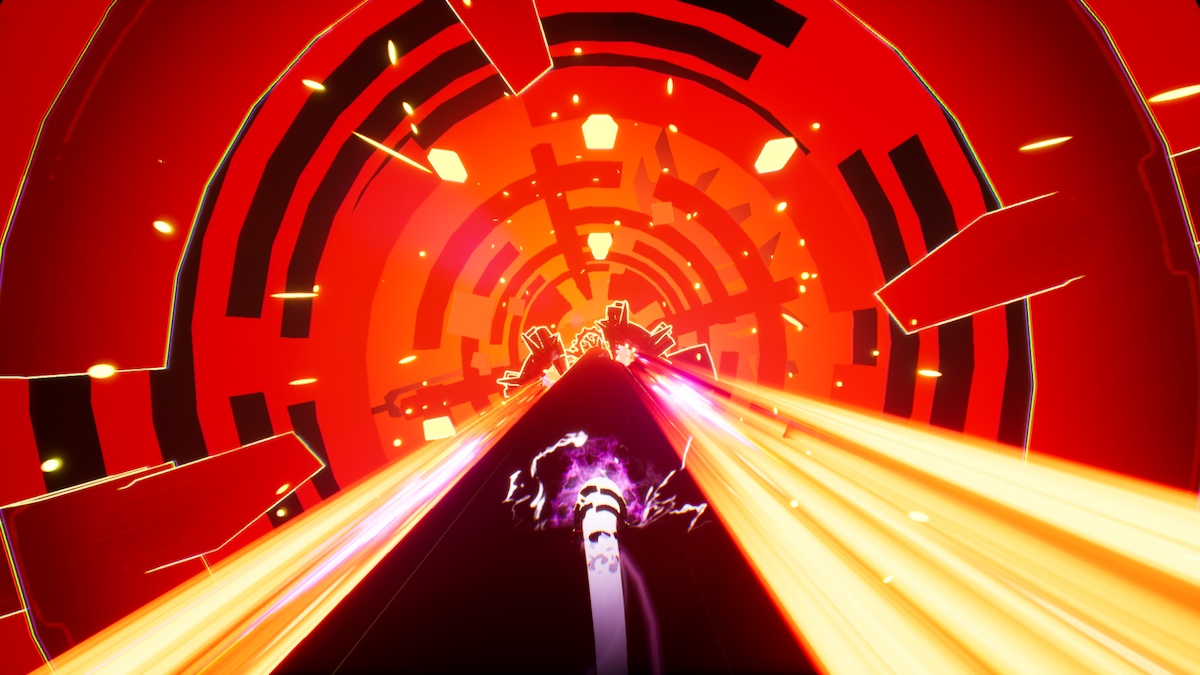 When NERVE willingly provides sufficient reaction time is where the game is at its neon-drenched, blisteringly-paced best. As simple a presentation the game might be — both its grand background geometry and occasional passing animations the only real semblance of a theme each world presents — NERVE’s investment with its gameplay is what counts. While that does narrow the appeal and interest one can show for a game of this type — to end up focusing entirely on the challenge put before you — there’s enough variety both in the mechanics and most importantly the manner at which obstacles are arranged to keep players fixed on reaching the end. As such, it seems like an odd oversight to not allow players to select individual zones to come back to — regardless of whether they’re looking to better their time or not — instead requiring players to play through the entirety of a world from its very start.

NERVE is also not without its frustrations even in the gameplay department and while minor in the grand scheme of things, these annoyances can crop up at the worst of times. The most troublesome problem comes by way of some of the hit-box detection, which at best is bothersome and at worst ruins the thrill of racing for the best time. While something like an object clipping through part of the environment (when the whole point is to have said object collide so as to knock it off your sphere) is noteworthy, there’s one trap in the game that requires you evading at the last second during slow-down. The problem is that the hit-box here is both unfairly wide and so inconsistent as to what counts as a successful evasion or not. Many an assumption that one has moved out of the way, only to die regardless. 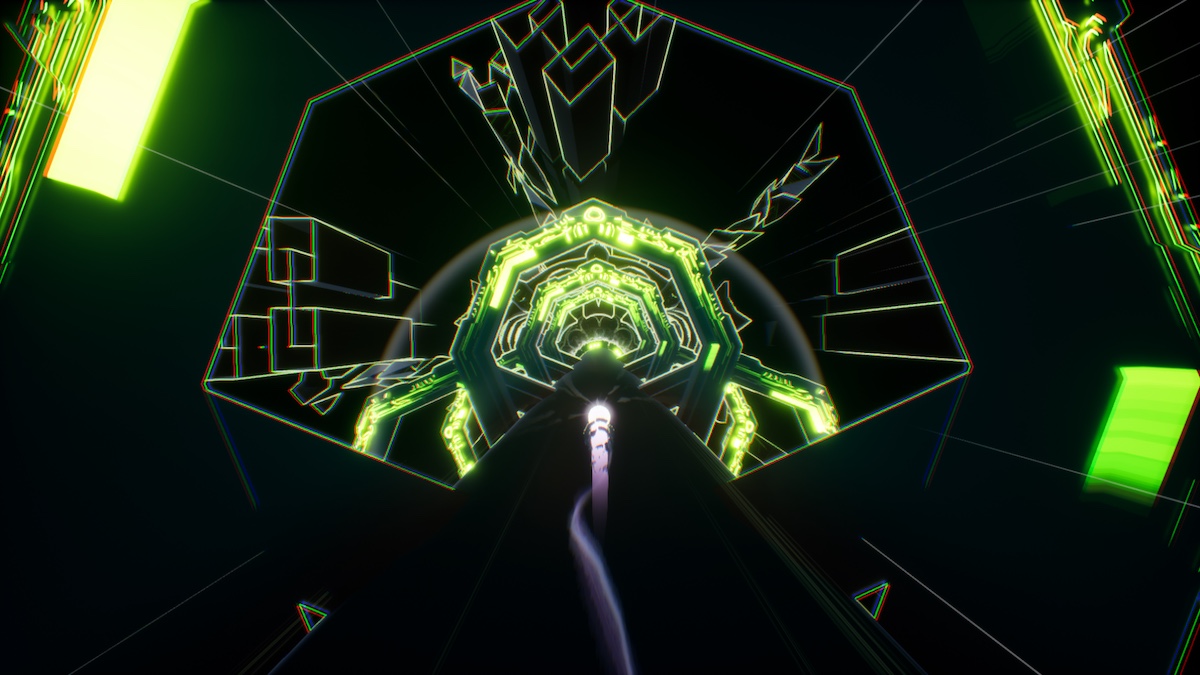 Though there’s little rhyme or reason for the imitation on visual detail, NERVE still provides a satisfying-to-conquer sprint through the multi-colored void that is its setting. A sprint that’s full of split-second tension and more importantly, interesting gameplay twists that will as much tease as they do test a player’s skill. An occasional annoyance or two there may be with specific mechanics and traps one is required to react to, what short-term grievances NERVE provides on the technical side aren’t enough to cancel out the delight of clearing each zone. Regardless of how many deaths it took to get there. While it’s a game that says little — and in the end won’t stand out as immensely as some of the greats of both the rhythm and runner sub-genres — what NERVE lacks in unique identity, it makes up for with a campaign housing a difficulty curve that’s both well-balanced and creatively cunning.