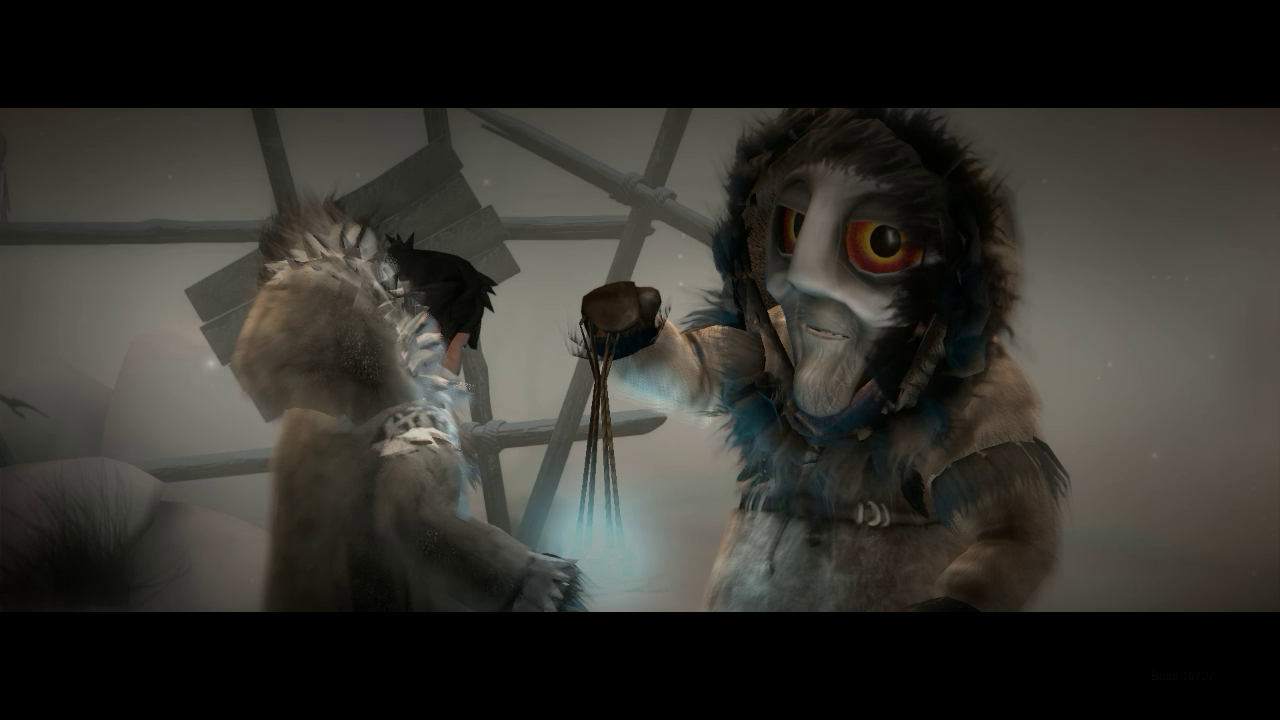 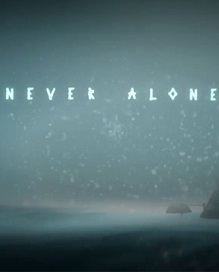 Without a doubt, Never Alone is one of the most ambitious games of its nature. An indie project created in collaboration with the natives of Alaska, it serves to be just as much a puzzle platformer is it is a storyteller of the culture. It’s daring not only in heartfelt motive, but because this is a setting that has yet to be fully investigated in gaming. Never Alone has heart and wants everyone to know it, but its heart only gets it so far.

Never Alone adapts a number of tales from the Inupiaq culture, the indigenous people of the Arctic regions of the world. The main story adapts Kunuuksaayuka, a story passed down through the culture, where a young child gets lost on their way home and must save their village from a destructive blizzard. The young girl in Never Alone is Nuna and her companion is an arctic fox. Together, the two encounter a number of various figures from Inupiaq lore. The story in Never Alone isn’t anything too complex, there are numerous videos describing each of the elements with an astonishing level of passion. Learning about the stories that shaped the native culture is incredible, but these videos are separate from the levels themselves. In order to understand the different terminologies and their significance, you need to press the touchpad to go to a video to watch. If the cultural lore were integrated more naturally into the gameplay itself, the tale could have much more weight, but keeping them separate only serves to break the pacing.

The main gameplay in Never Alone has you controlling two characters: Nuna and the arctic fox. You can switch between the characters with a quick tap of the triangle button and each character has their own special skills. Nuna can push blocks and use her bola tool to throw at distant objects. The fox has a more spiritual connection and can summon Inupiaq spirits to use as platforms or ledges. The double character dynamic gives off vibes of Brothers: A Tale of Two Sons, but since you can’t control both characters simultaneously, it brings about some problems. The character you aren’t controlling is led by an AI that, while not abysmal, has a tendency to act against your wishes. Some stages also require some quick actions and having to change characters in these intense moments can be a real headache. 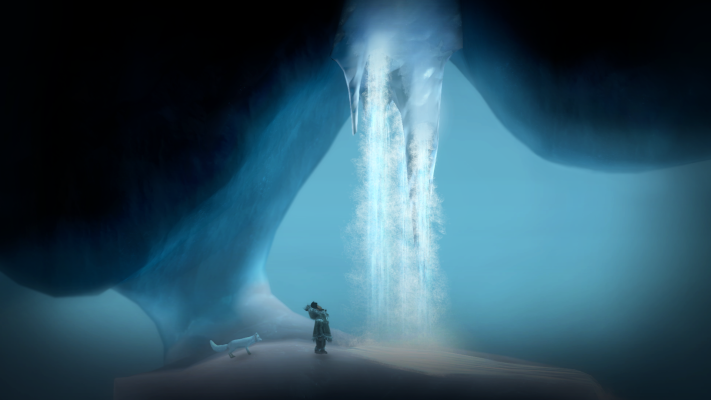 Controlling Nuna and the fox is a messy matter as well. Nuna herself runs stiffly and the jump mechanic can be unreliable. The biggest issue, however, is the very limited amount of mid-jump control, which can makes jumping puzzles a nightmare. The bola weapon is aimed by holding back on the right analog stick, but you fire in the direction you move the stick. Without any legitimate aiming sight, this is an absolute pain to use and very rarely will you have any grasp on where your weapon will go. Terrible ledge controls make things even worse as Nuna and the fox will stop at any ledge, forcing you to run or jump off instead of a simple step downward. Overall, the controls in Never Alone are unreliable, unwieldy, and make the puzzles troubling to complete.

And it’s a shame, because there’s a lot of imagination in Never Alone…just not when you’re actually playing it. The levels are incredibly generic and don’t use their setting with much creativity. Pushing blocks, lifting planks and hopping across platforms are okay, but without any real evolution behind these mechanics, the level design feels flat and dull. Still, there are some moments that stand out incredibly, like escaping a cavernous whale’s belly or hopping across eerie spirit trees. The puzzles here aren’t particularly complex, but they stand out for their inventive use of the different elements of the culture. This is where Never Alone really comes into its own, showing off the world of Inupiaq lore and making the journey a captivating one. 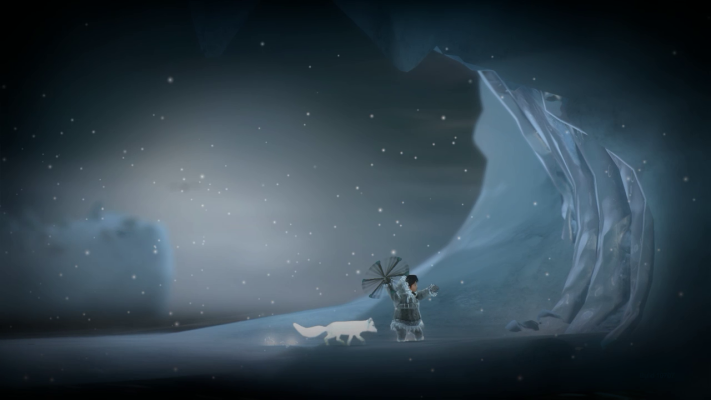 It’s a tremendous shame to see the gameplay in Never Alone so underdeveloped, because when it comes to aesthetic, this game triumphs. Never Alone manages to take multiple terrains and actually makes them feel cohesive to a singular region. An arctic sea, a flooded cave and an abandoned village are all available to explore, culminating in a spectacular resolution of the tale. The cartoony designs of the characters are charming, harkening back once again to Brothers: A Tale of Two Sons, and while there were some weird glitches like the fox being twisted and contorted after dying, the visual direction looks sharp. The indigenous language narrates the cutscenes that portray the story’s characters in traditional Inupiaq art, definitely a highlight. The overall presentation is fantastic and you truly see the vision realized. It’s just a shame that the design can’t build on that. 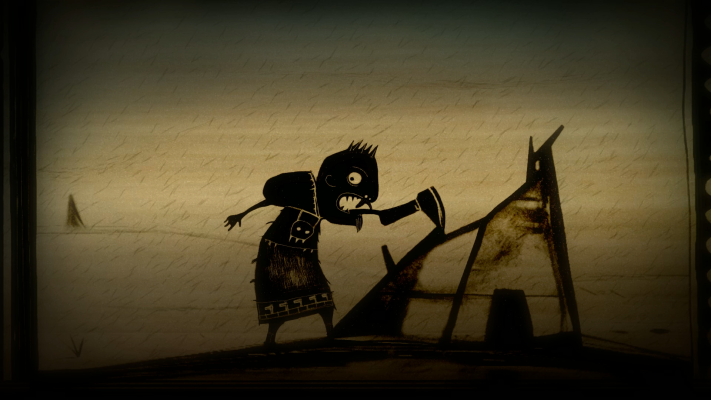 Never Alone is a major disappointment. It masters aesthetic design and cultural storytelling, but simply cannot succeed on that alone. The gameplay is dull and uses the same tropes throughout the experience without any real expansion on them. The clunky controls and haphazard mechanics serve to limit its incredible vision with unreliability. The levels are imaginative, but the imagination is purely on an aesthetic level instead of a gameplay level. This is all delivered in a small package not worth its asking price. It’s a travesty to see it fumble, because this is a setting that has gone untouched in gaming and more games should explore this side of the world. Never Alone makes experiencing this untouched world cumbersome and frustrating, draining the magic away from its promise and leaving a sketchy, unpolished game in its snow-covered wake.