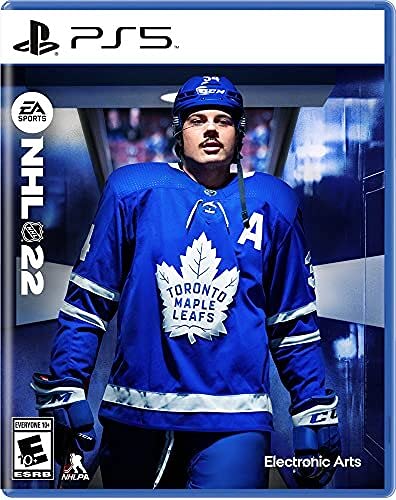 EA Vancouver decided that it would skip the launch window of the PlayStation 5 and Xbox Series X/S so it could focus on a truly new experience for NHL 22. The team made the jump to EA’s Frostbite Engine for NHL 22, which helps create the baseline for a new generation experience for the series. Superstar X-Factors were also added, which helps amplify abilities for the superstars on the ice to help separate them from the rest. The result is a new look and feel for the NHL series, and the largest leap of any EA Sports game this generation.

Superstar X-Factors help bring the best players in the NHL to the forefront of NHL 22. This can be experienced across all modes, but in a variation. Quick Play and Franchise Mode allows players to have their allocated Superstar X-Factors on teams and in Franchise Mode, amateur and pro scouts can reveal these X-Factors for players coming up or in the league. Be A Pro and World of CHEL will have you unlocking these through different means for use. There are 29 different Superstar X-Factor abilities and they’re broken down into two categories: premiere zone abilities and superstar abilities. Some players will simply have superstar abilities without being an official X-Factor.

It’s important to know and read what player has what abilities. It can’t be assumed that just giving one of these players the puck immediately means they score every time. Some have passing abilities or defensive abilities. Players like Sebastian Aho can deliver passes that aren’t as easily makeable. These are best experienced on the default difficulty settings to get an idea to how they play. Having the skating ability allows for better one-on-one battles. Adding these abilities is a very nice change of pace and helps the overall feel of NHL 22 on PlayStation 5 and Xbox Series X/S feel fresh. The icons above the heads during gameplay are pointless if you don’t know what it means. It would be nice if the team added a player information box much like NBA 2K has to have a better idea of what you’re working with. 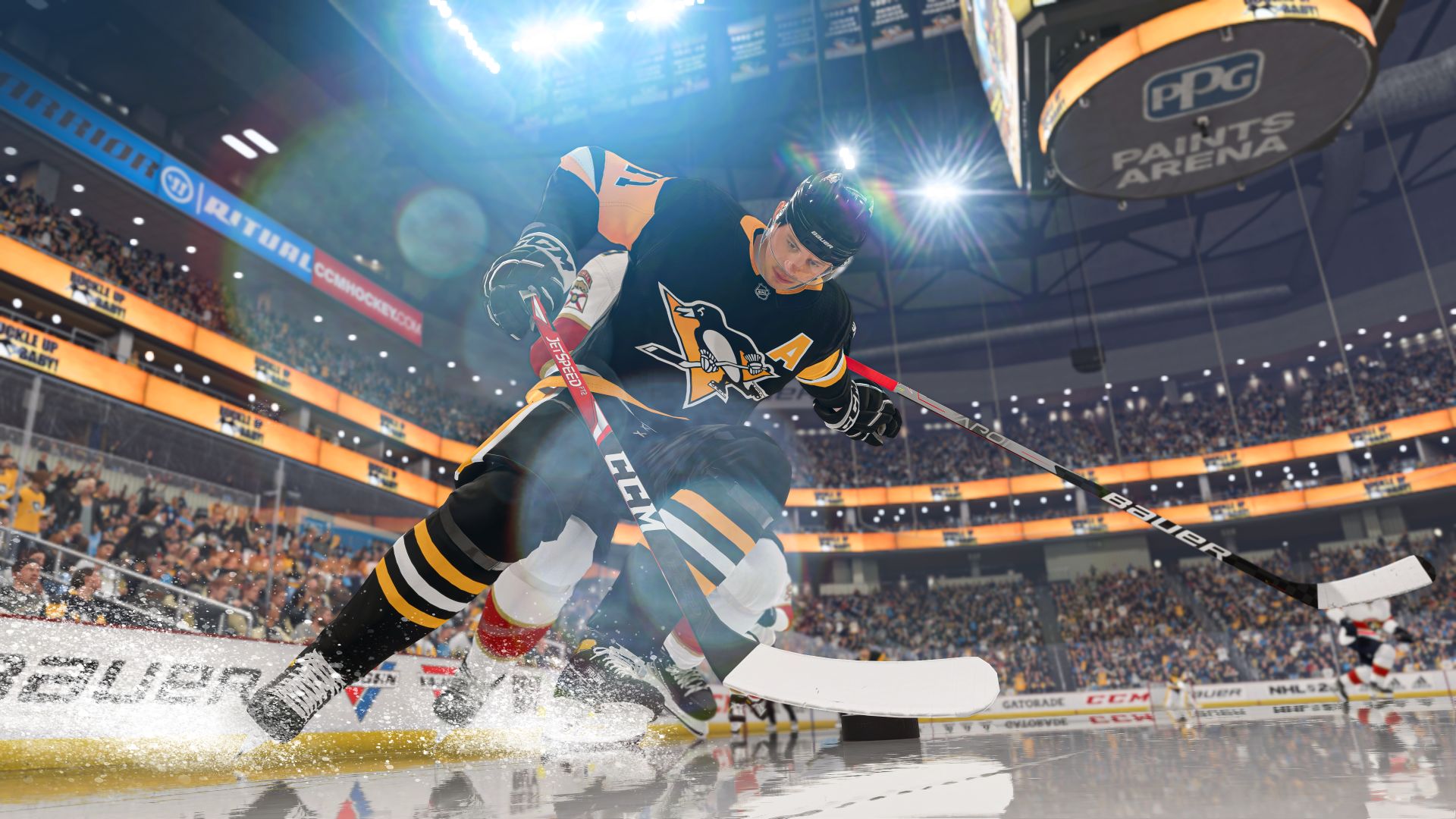 Frostbite is more focused on bringing the visual upgrades to the latest generation of NHL 22 rather than completely overhauling the physics, but there are changes. The first thing you’ll notice is the improved lighting, but there’s no Ray Tracing. What the game offers are a ton of screen space reflections on the ice that make it more realistic. The game is darker during gameplay and makes it feel more gritty. If there’s a stoppage in play and the arena lights up, you see this on the ice. Skate indentions in the ice and tons of details make this look fantastic and helps to provide an excellent jump in visual quality.

Visual player details dictate the rest of what Frostbite has to offer. Overhauled player faces make the players much more recognizable across the board, but are ultimately still lacking in comparison to the competition. Coaches do not look good at all, but facial animations and the overall look are better than the previous generation. Cloth animations have been updated down to the smallest detail to provide more realism. The crowd also looks more detailed and the arenas are beautiful as objects offer superior textures. Stick physics have also changed with Frostbite as stick-on-stick and stick-on-puck interactions have been much improved. Playing the puck against the boards feels more realistic and stick-on-stick interactions come down to player abilities. This was also designed to help penalties be more realistic, but this is where the problems start to crop up. 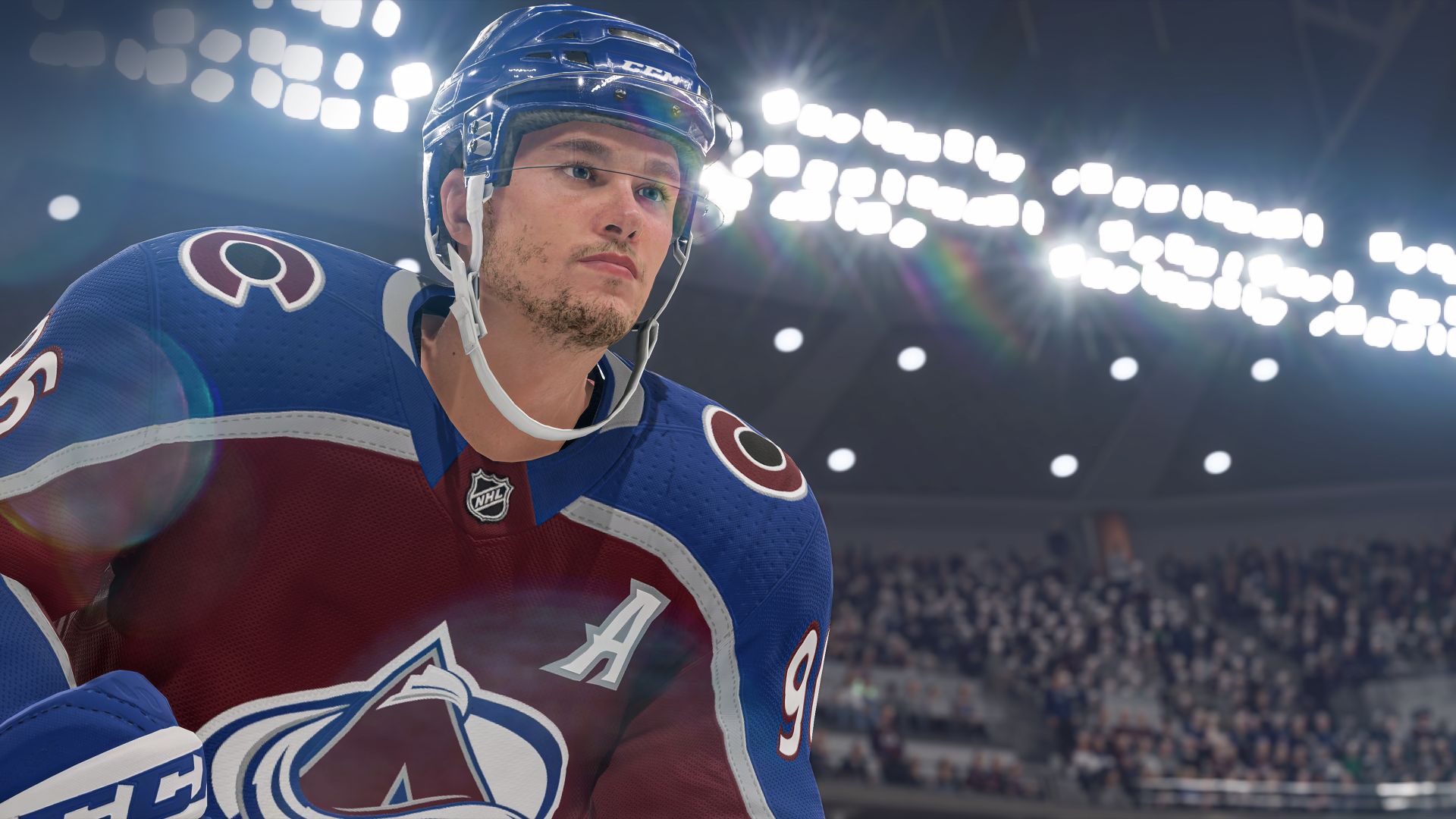 While the feel with Frostbite and the improved visuals help create a fresh experience for NHL 22, the way the AI and flow of the game are designed is still a problem. The AI rarely gets a penalty called on them and while tripping seems to happen less, barely poking or a stick lift will result in a penalty for you and the AI will go multiple games with committing nothing. Upping the difficulty results in the AI basically doing what it wants as goals feel scripted, whereas the normal difficulty may be too easy for you. The AI will also counter everything perfectly and consistently be in position to stop you. There’s no happy medium, once again. Goalies also give up their fair amount of easy goals. There are bugs that cropped up where players would warp somewhere, or get stuck in the goalie. I’ve also had an occurrence where the displayed score was wrong. As for the positive in playing the game, when things are going well, it feels great. The weight transfer of players on the ice feels better and maneuverability is realistic. Passing can still be confusing as using a normal pass results in a good bit of interceptions and aiming a pass or saucer pass is inconsistent. Even with the EA Trainer that says you’re pointing to someone, it ends up doing something else. The hits are fantastic and simply putting a body on a player seems to make more of a difference than it did in the past.

The core modes are intact but with upgrades to each. Franchise Mode allows hiring and firing of all coaches and is still deep. The Expansion Draft returns as it’s touted as a new mode as the Seattle Kraken make their appearance this year. This has been a part of the game since Vegas was introduced, and it’s still something other games should adopt. You can do the Kraken’s draft, create a team and an arena and replace the Kraken, or be added as the 33rd team in the league. The arena creation is deep and you can use many different logos. The Owner Mode portion is deep as you can upgrade arenas and set prices. 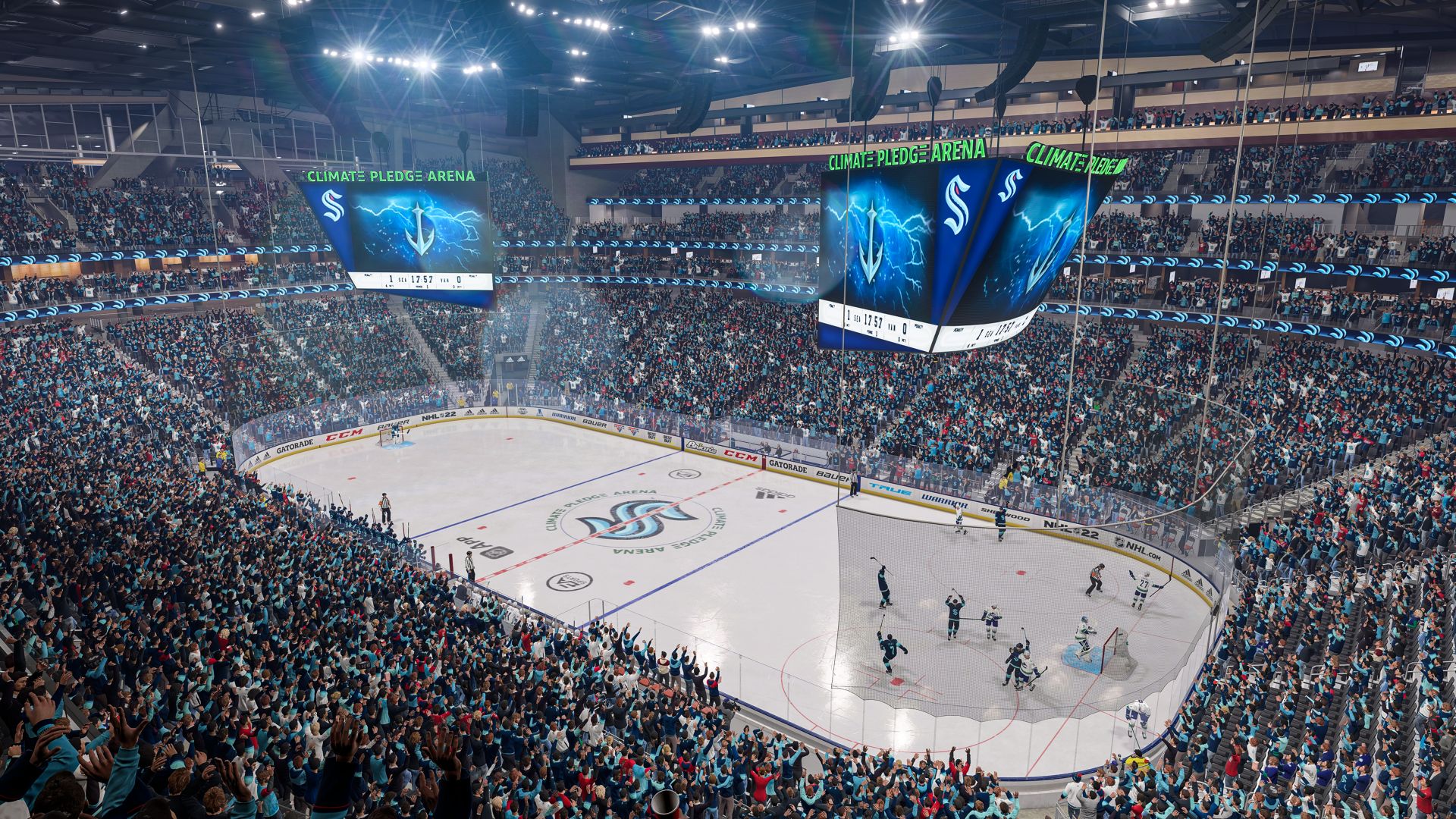 Be A Pro largely plays the same but includes the ability to unlock Superstar X-Factors, experience a new progression system and answer more interview questions. The experience is largely the same with the design, but the focus is on completing objectives to get those Superstar X-Factors. The same goes with World of CHEL as you grind to unlock Superstar X-Factors for your player, but you need a variety of player archetypes to experience them. 12 player classes now exist with specified X-Factors for each. You’re now able to hop in and out of EASHL games, which is a nice perk where it was a pain to find the right amount of people to match up for a full game. Hockey Ultimate Team returns as the card-based and microtransactions-focused mode, but works well with the cards that are provided even if you don’t pay a dime. It’s still fun to build a team through this even for the offline stuff. 50 X-Factor players can be upgraded with new Synergy Slots that will provide team boosts. The problem is that’s 50 players out of how many that are in the NHL?

What enhances the experience for the latest generation version of NHL 22 is the DualSense, which can only be experienced on the PlayStation 5. NHL 22 is the EA Sports title that does the most with DualSense. You can and feel your player skating as the rumble will glide up and down the controller. Hits are jarring and can be felt, while passing with the Adaptive Triggers is restrictive based on fatigue. You can hear coaches calling for line changes and other commands via the speaker. It would have been nice to integrate shooting with the triggers, but the NHL series has revolved around the skill stick.

The presentation remains roughly the same with the same announcers. It does feel more like a hockey broadcast and a third reporter provides in-game stories such as player matchups, which is a nice change of pace. NHL 22 uses augmented reality to display stats for the game, but if the team would just slow down the pace of the game when it’s not in action, then more stats and a better in-game story could be displayed. It always feels like EA Sports games are in a hurry to get over with, but these changes provide a slight improvement. With the NHL returning to ESPN, it would be nice to see ESPN incorporated into the series. The soundtrack offers a ton of current alternative and hip-hop artists, but that fantastic NHL soundtrack remains. The audio quality during gameplay is still great and each arena has its own goal horn. 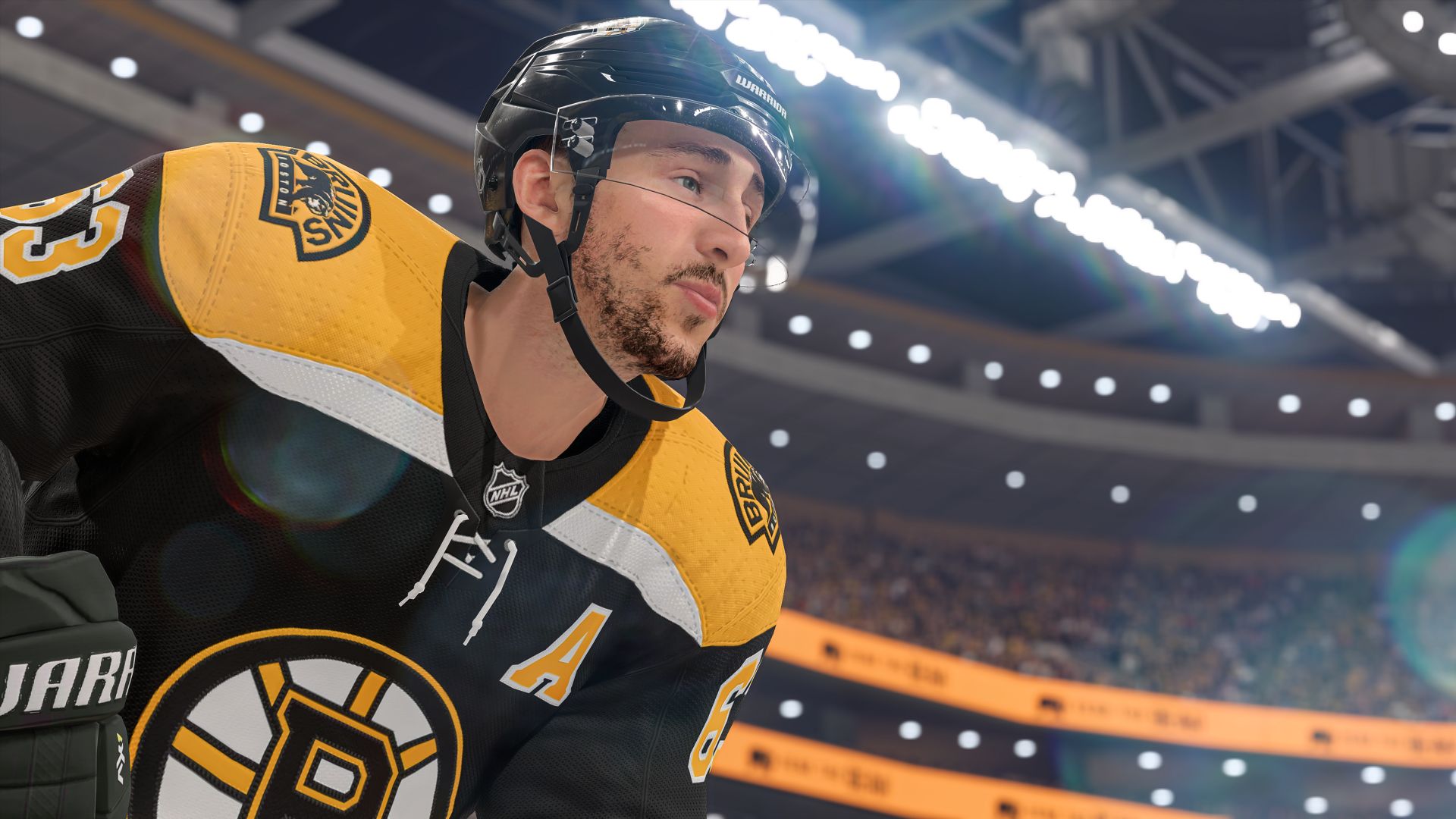 NHL 22 on current-generation consoles is the best NHL experience that has released in some time. It also provides the biggest change from last gen to current gen consoles of any EA Sports game yet. It still has its issues at its core with how the AI plays and there are bugs that crop up often, but the overall experience feels fresh and the game looks much improved. The lighting and reflections provide the biggest boost while Frostbite brings more realism to player faces and jerseys. I feel more could have been included with Frostbite on the physics side, but this will come in the future. While the modes remain the same, the updates to each are sufficient and the addition of Superstar X-Factors allows for a game-changing experience. Online, if not getting disconnected, generally works as it needs to. NHL 22 offers the right feel for a new console that a lot of sports games haven’t provided in the last two generations.