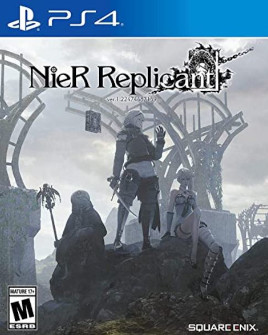 In 2010 the world was introduced to the Drakengard spin-off NieR. By now this is common knowledge in the fandom, but in Japan NieR was released as two separate versions: NeiR Gestalt, where the protagonist is Yonah’s father, and NieR Replicant, with a much younger protagonist being Yonah’s brother. Aside from the character model, relationship to Yonah and minor dialogue differences, the two games are essentially the same. The player is free to name the protagonist whatever they want, but for the review he shall be called Nier. NieR Gestalt was released outside of Japan as NieR to lukewarm critical reception, but developed a decent-sized cult following. After the huge success of NieR Automata interest in the original title increased and for the first time ever NieR Replicant is being released outside of Japan as the reworked NieR Replicant ver.1.22474487139…

NieR Automata was largely considered a masterpiece and received nierly universal acclaim. The original NieR, on the other hand, could be described as a great game trapped inside a decent game’s code. Fans would praise the emotional depth of the story, the memorable characters, entertaining dialogue and phenomenal soundtrack, but if we’re being objective, the graphics weren’t exactly great even by 2010 standards, there were many tedious side quests and the gameplay mechanics were nothing to write home about. Fans could forgive some of these issues as the net positive features could elevate the experience above its shortcomings, but more critical gamers were less forgiving.

NieR Replicant ver.1.22474487139… is a version upgrade of the original game and not a full-on remake. The visuals have increased from 720P and 30 FPS to 4K and 60 FPS with the character models and environments being rebuilt, with enhanced lightning and increased draw distance. The script remains mostly the same, but there have been a few tweaks and changes. More English voiceovers have been added from the original voice actors and there’s now an option to play with Japanese voice acting. The music has been re-recorded and in some cases extended, with additional compositions added. As a bonus, once certain conditions are met the soundtrack from NieR Automata can be played. There are additional costumes as well, some of which can be unlocked in game and some NieR Automata costumes that are available to download at launch. The voice actors for 2B and 9S also make contributions. 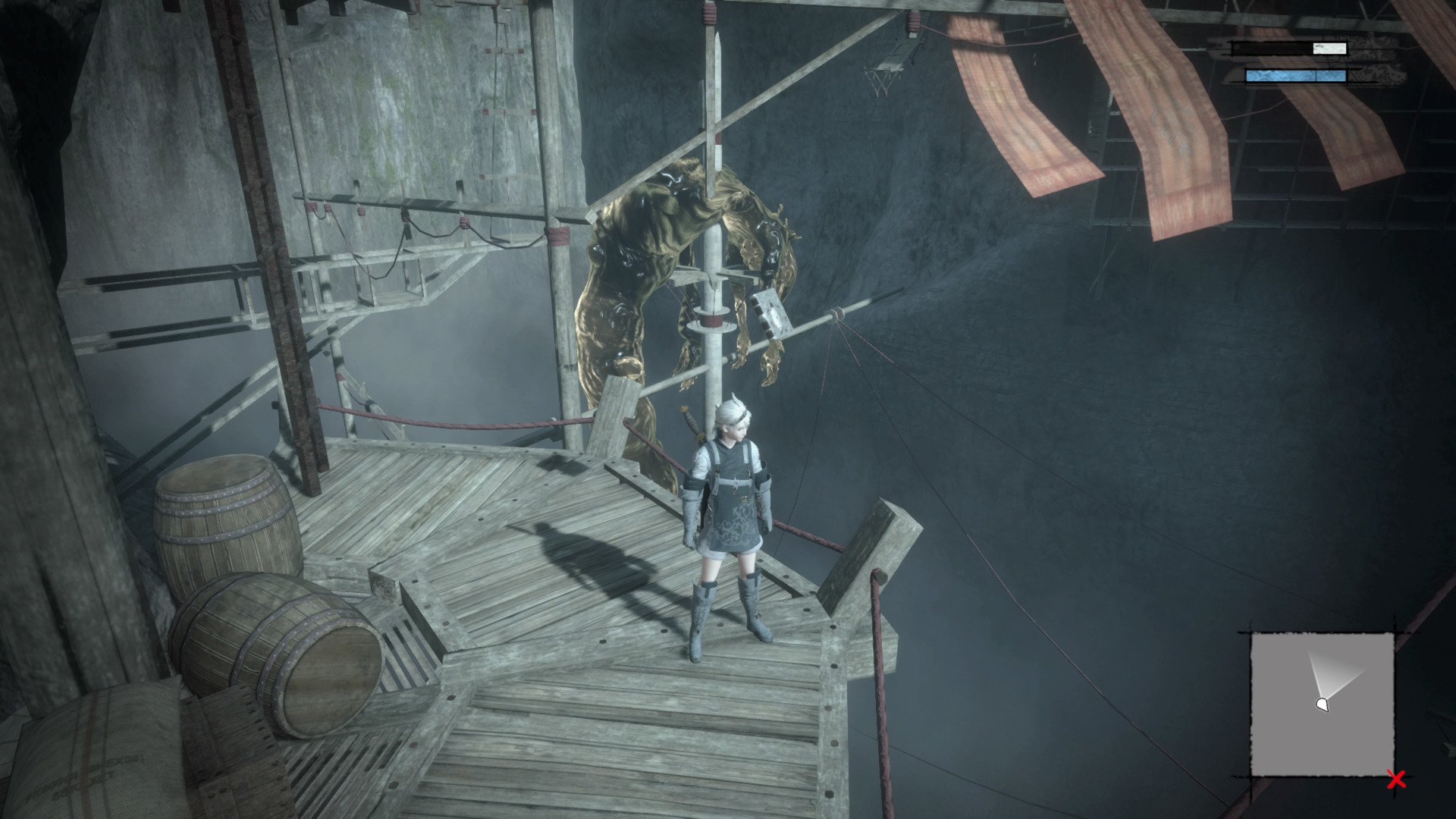 In addition to the audio visual upgrade, there’s additional content and gameplay changes. The original NieR had clunky gameplay and this is fortunately something addressed in the upgrade. The camera and player controls in NieR Replicant ver.1.22474487139… have received a massive overhaul, making the experience much more fluid and closer to feeling like Automata. To borrow another element from Automata, this update includes an auto battle option to use on the easiest mode just like in the sequel. The original NieR DLC World of the Recycled Vessel that includes fifteen Nightmare Dungeons is included after the player reaches a certain point. The biggest addition is a new main story quest, complete with a new area to explore, new music, cutscenes and an epic boss battle.

The tale of NieR Replicant ver.1.22474487139… begins in the year 2053 (for fans that are revisiting NieR, you are remembering correctly, OG NieR started in 2049) where Nier and his sister Yonah are struggling to stay warm. Some monsters known as shades appear that Nier has to fight off, and after this the scene ends the player is transported 1412 years into the future. The world Nier now inhabits is patterned after past eras of our world but the ruins show evidence that society was once more technologically advanced. Nier and Yonah live in the village where Yonah is suffering from a mysterious disease where black runes appear on her body called the Black Scrawl. In addition to Yonah’s health problems, shades are increasing, but in their numbers and aggression. Unsure of what the next step should be, Nier pays a visit to local librarian Popola.

Popola serves a guide for where Nier should travel next as his quest to search for a cure unfolds, though there are many other characters Nier meets that make this game so memorable. The all-knowing talking book Grimoire Weiss attempts to use his accumulated wisdom to assist Nier, but a good portion of his energy is directed at the comedic bickering between Weiss and that “foul-mouthed hussy” Kainé. The characters typically have some tragic backstory, and how the details of certain character’s past are revealed makes them sympathetic. Kainé has a tough exterior where friendly is not an adjective one would use to describe her, but she does have a soft spot for one particular character. NieR Replicant ver.1.22474487139… is filled with characters whose lives are filled with tragedy and has its share of heartbreaking moments but there are just enough moments of humor worked into the dialogue to add just enough levity to keep the game from being totally depressing. One of the biggest strengths of NieR has always been the story, and while it can be a slow burn to get to the interesting parts, the payoff for investing the time into the game is worth it, particularly in subsequent playthroughs where more information is revealed. 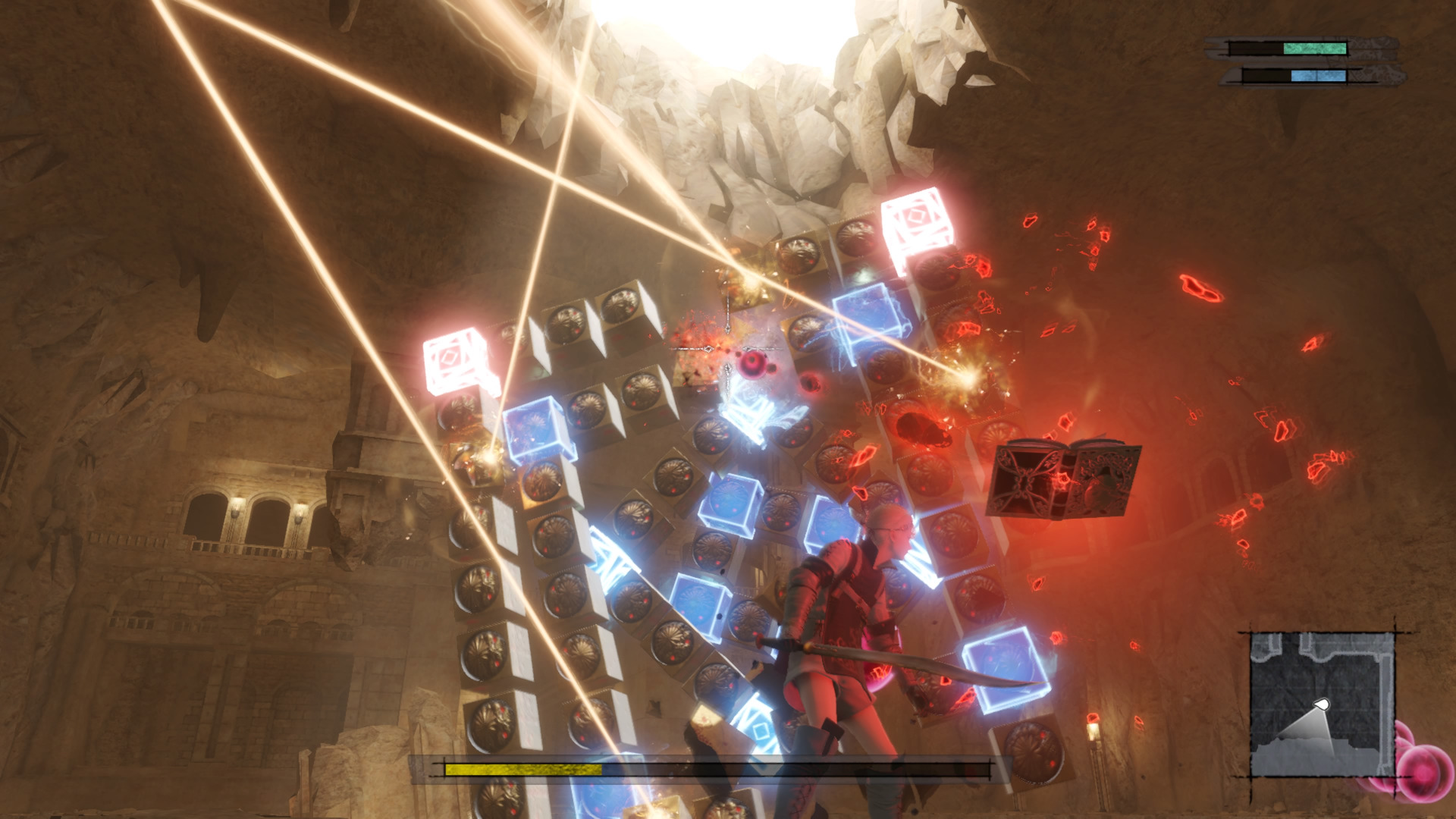 NieR Replicant ver1.22474487139… is an action RPG. Nier’s arsenal consists of one-handed swords, two-handed swords and spears. These weapons can be upgraded with the proper materials, but upgrading every weapon to its maximum power is an enormous grind that few would have the patience for. Nier is an adept warrior in his own right, but Grimoire Weiss as a battle companion is a huge help. Throughout the game Weiss gets different spells that can be of great assistance and some battles simply can’t be won without the long range of his projectiles. Some of his spells are just basic projectiles, but others are more unique, so it’s best to just play around with his powers and see which ones are best suited for your playstyle. While there isn’t a huge variety in the standard enemies, each boss fight is a unique experience that requires its own strategy. The boss battles are typically presented as some sort of grand spectacle, making the confrontation feel more epic and figuring out how to best them is one of the more fight aspects of combat, especially with the improved game mechanics.

Repetition is a major theme of NeiR Replicant ver1.122474487139… and this is a something that could not be fixed in the upgrade. This is particularly true in some of the quests the villagers give where some of them feel like the objective is just to see how many times they can make Nier run back and forth between locations which gives some quests a padded busywork feel to them. A lot of these are optional, but in order to get all the endings every weapon needs to be acquired, so some quests need to be completed as they are the only way to get certain weapons and also for the required gold to purchase every weapon. The world is thankfully small enough where traversing it isn’t too consuming, but be prepared to do a lot of back and forth to satisfy the villagers. There are multiple endings that require multiple playthroughs, and it’s worth getting all the endings to get the full NieR experience. Mild spoilers ahead, so if you don’t want to know skip to the next paragraph. Each subsequent playthrough begins at the halfway point, so it’s quicker but does offer new insight and details to the plot. Some of these new details can alter the player’s perception on everything that they did during their first playthrough. Ending B happens after completing the game once, but all weapons need to be acquired for the other endings. Even though the game is enjoyable, playing through the same sequence multiple times does feel, well, repetitive. 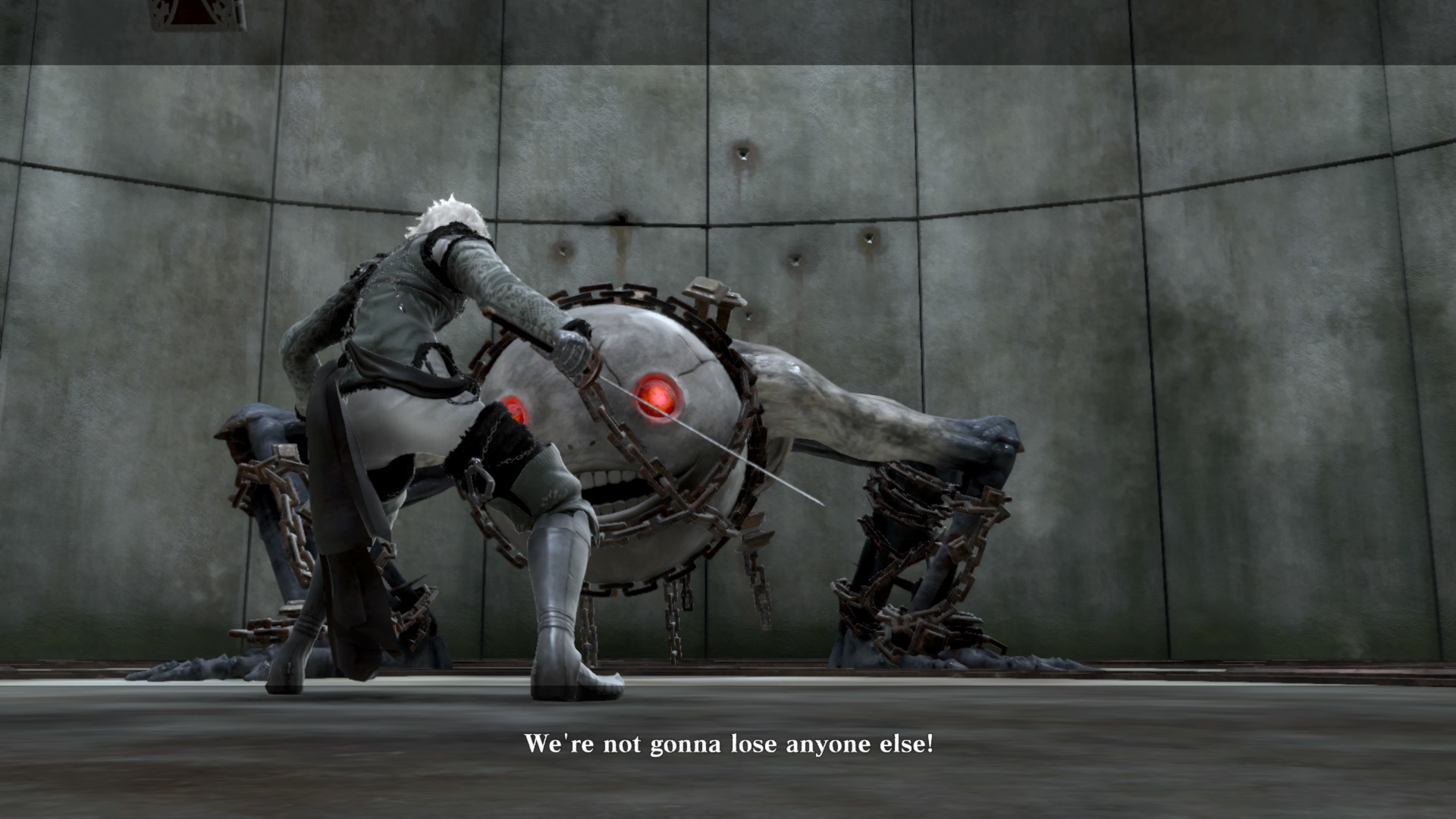 Compared to the original 2010 NieR, this version is a huge improvement. Having the original soundtrack burned into my memories, the changes to the music were jarring at first because it didn’t fit with what was familiar, but after adjusting to them the verdict is the soundtrack is improved. The addition of the fifteen Nightmare Dungeons is nice extra content, and those who played the original DLC will appreciate how this version reverses something in the original. The new story mission was interesting and enjoyable with a great boss battle. The new content does fit into game world well, but there are doubts in regards to whether it has been interwoven into the story seamlessly enough where those who haven’t played the original will be able to identify it as the new addition. It doesn’t drastically change the story, but it’s a nice addition with new commentary on human nature which felt more like the tone of Automata. The new bonus content such as costumes and the Automata soundtrack option are also nice additions.

NieR Replicant ver1.22474487139… is in a rather unique position as far as upgraded games go. Most of the interest in this title probably comes from people who learned about NieR through NieR Automata and not from people nostalgic for the 2010 release. The two games are connected, but the stories are loosely connected; aside from a few common characters, shared lore and themes, the games are very different. The experience of playing the sequel I felt was enhanced to a minor degree because of completing the original. NieR Automata has a futuristic sci-fi feel to it while Replicant feels like it’s in the past. Both games are great in their own right, but taken as individual entities, they’re enjoyable and offer an emotional journey.

On a technical level, NieR Replicant ver.1.22474487139… is a vast improvement over the original 2010 incarnation. There are some models and instances that give away that this is a previous-generation title given a facelift, but for the most part things look like they belong on the current hardware. The game mechanics are greatly improved and closer to the level of polish that was seen in NieR Automata. The soundtrack was always one of the strong points even during the initial release, while the re-recorded and expanded score improves on something that was already great. The re-working adds greater depth to the familiar pieces and introduces new compositions. This is one of those games where investing in a high-quality headset is worthwhile to fully appreciate all the nuances of the music. 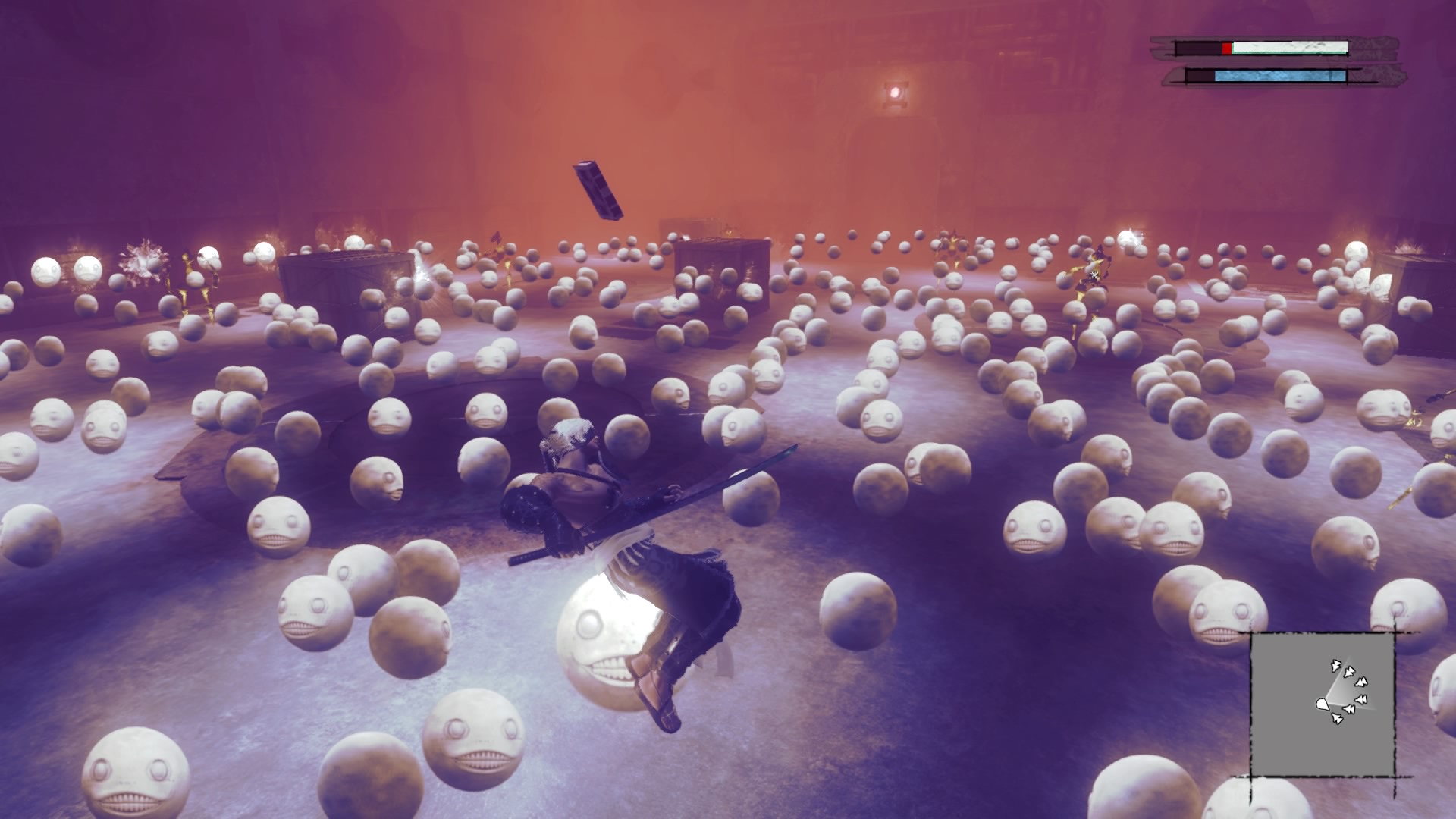 NieR Replicant ver1.22474487139… is the game that NieR always should have been. The original 2010 release was a mixed bag as there were so many things it did well, but it had a lot of shortcomings, making it a title that even people who loved it had to objectively realize that there was room for improvement. It was a game that would be recommended by fans who stated their love for it, but also had to give a few caveats with the recommendation. This is no longer the case, as the new version realizes all the potential of the original and is simply a great game. New cutscenes build on the lore and character development, the wonderful soundtrack is improved and the areas that warranted the most criticism such as game mechanics and graphics no longer do so. The story takes surprising twists and hits the emotional depth making this is a truly memorable experience. Whether a fan of the original NieR or someone who discovered the series through NieR Automata, Nier Replicant ver1.22474487139… is a must play, especially for fans of games that can bring the player to tears.