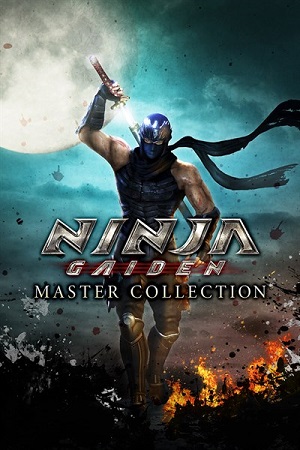 Ninja Gaiden: Master Collection follows Ryu Hayabusa’s adventures to save the world from fiends and sinister corporations. Despite forming a trilogy, the three games don’t form a cohesive story. There’s no singular antagonist, plot threads or consistent cast that carries over across the games. Players who opt to play one after the other will pick up on references to previous games, but there’s no overarching plot to follow. Each entry is standalone, which makes it easy to hop around the different games.

As for the stories, both Ninja Gaiden Sigma and Sigma 2 keep the plot details light. In Sigma, players race to reacquire the stolen Black Dragon Blade and avenge an attack on Hayabusa’s village. Meanwhile, in Sigma 2, Ryu must race against time to stop the resurrection of the Archfiend. Both games embrace their campy nature, delivering enjoyable, albeit shallow, stories. Ninja Gaiden 3: Razor’s Edge is a different beast, opting to tell a serious story about an organization trying to remake the world. It also attempts to humanize Ryu and make him more of a likable character. Unfortunately, its efforts fall flat due to atrocious writing, cringe-worthy performances, and a healthy dose of disconnect between Ryu’s words and actions. Ninja Gaiden 3: Razor’s Edge focuses the most on plot, but it also has the worst narrative. 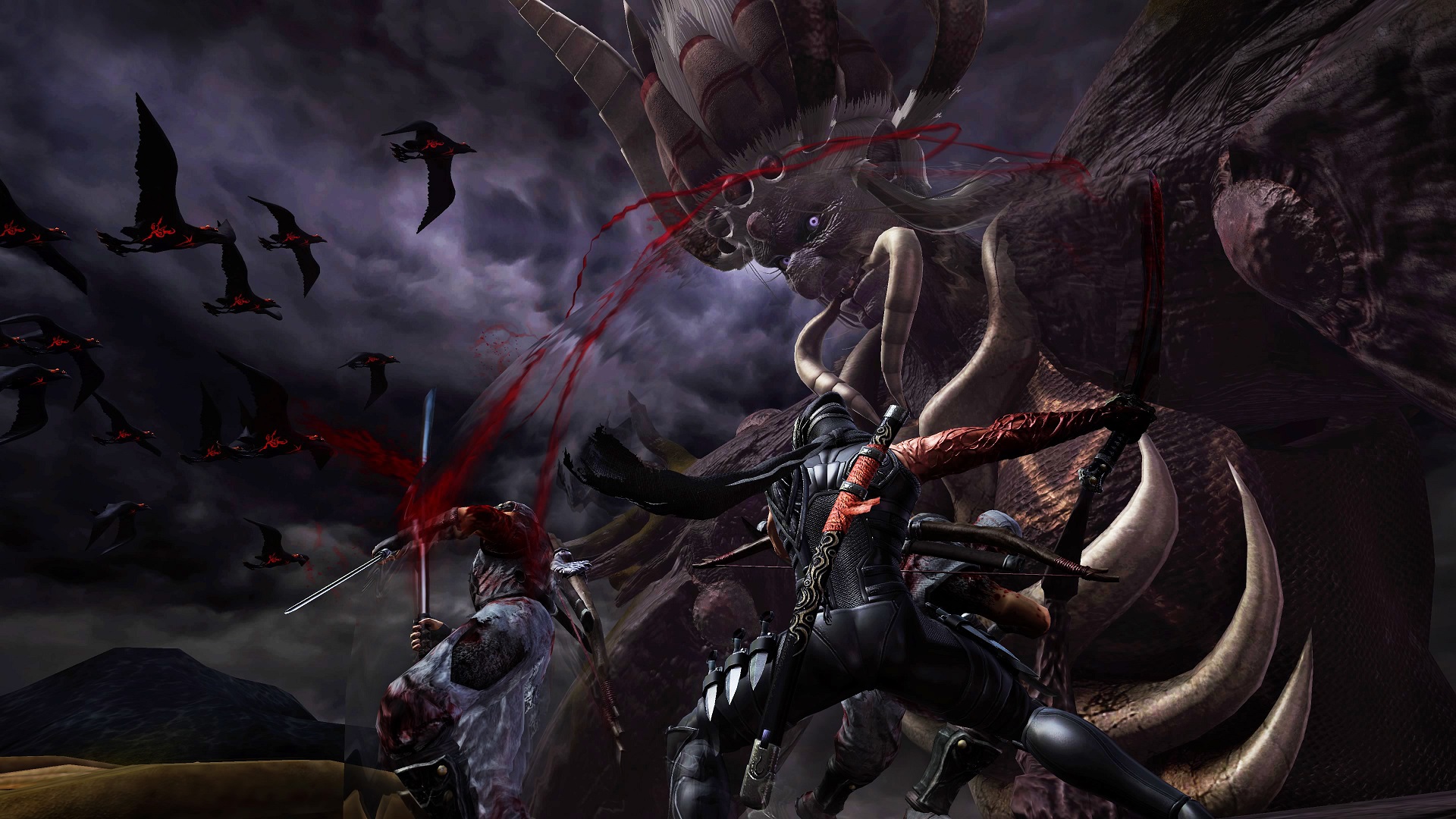 The series has never been known for its strong narratives as what made it such a staple was its deep and satisfying gameplay. Ninja Gaiden Sigma and Sigma 2 carry that slick, fast-paced gameplay from the original PS3 releases to the Master Collection. Ninja Gaiden 3: Razor’s Edge isn’t terrible, but it still bares the scars from the maligned Ninja Gaiden 3. The gameplay there can be fun, though it remains a more streamlined version of the previous games.

It’s important to note that the Master Collection doesn’t include Ninja Gaiden Black or Ninja Gaiden II. According to Team Ninja, the base code for both these releases has been lost to time. The Sigma versions weren’t bad versions of the original games; many people enjoyed them immensely, in fact, but Team Ninja did make some sacrifices in the difficulty and enemy count departments. To compensate, the developer created new weapons, modes, playable characters and quality of life improvements appreciated by numerous fans. As for Razor’s Edge, it was always the best version of Ninja Gaiden 3. Suppose you were looking for Ninja Gaiden Black or Ninja Gaiden II, or even a definitive edition that meshed the best of the originals with the Sigma versions. In that case, you’d be disappointed with the Ninja Gaiden: Master Collection.

Of the three games, Ninja Gaiden Sigma is the oldest and most in need of attention. Based on a 2004 game (Sigma released in 2007), the game feels its age in the Master Collection, feeling more like a port than a remaster. It lacks many of the future title’s quality of life features like having a pop-up menu to change weapons and ninpo or having a ranged weapon and shurikens equipped simultaneously. Combat remains fun and engaging, and Ninja Gaiden Sigma stands out for its Metroidvania level design. Sigma’s fundamental weakness, though, is the camera, which feels worse than ever. Ninja Gaiden Sigma needed more love and attention to get its feature more in line with the other two games. As it stands, the game feels like a relic. 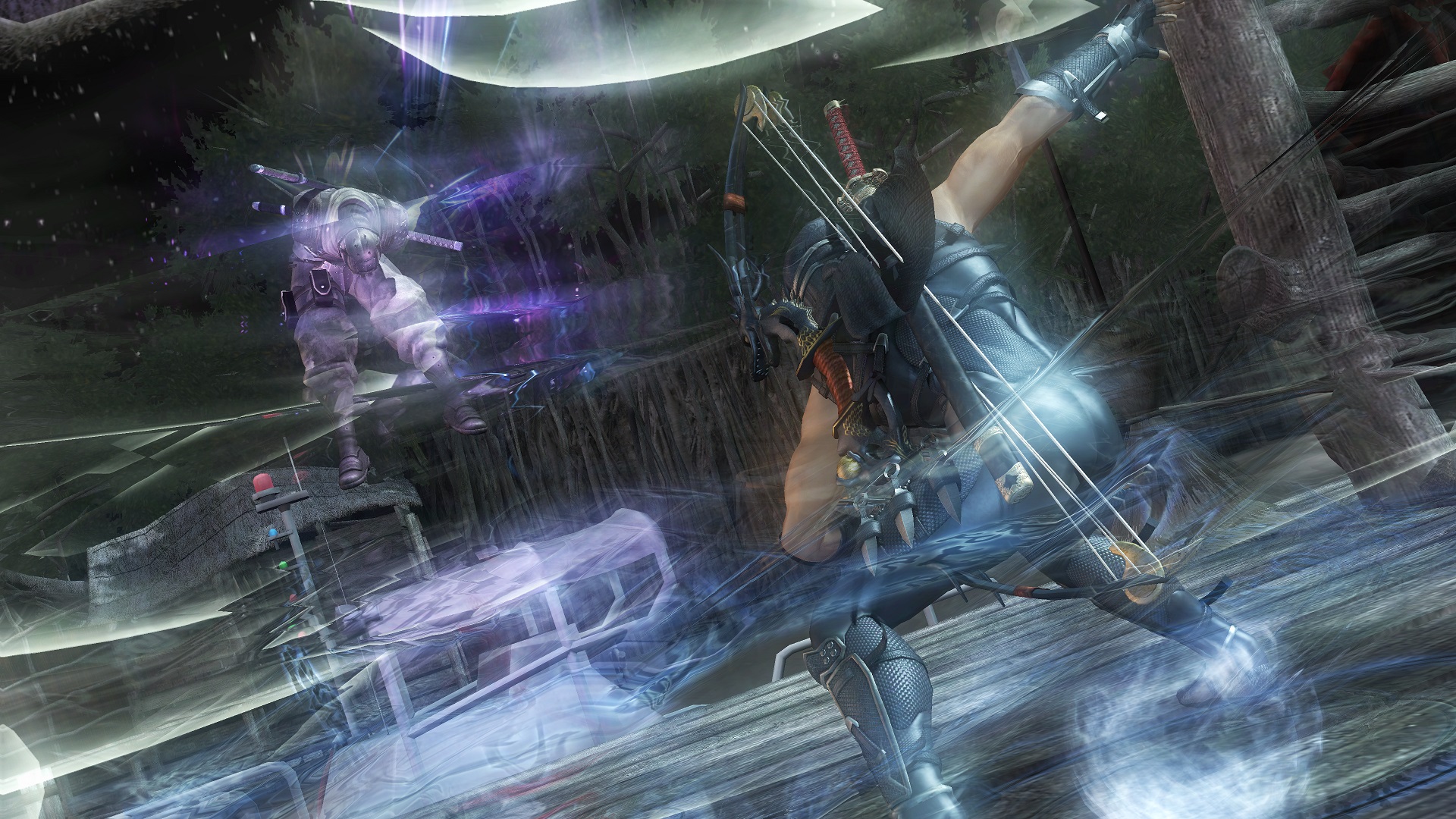 Ninja Gaiden Sigma 2 stands as the best entry in this collection, shrugging off many of Sigma’s issues thanks to quality-of-life improvements made back in 2009. Like Sigma, Sigma 2 comes off more like a port than a remaster, but there wasn’t much needed to be done beyond visual and performance improvements. The camera is still a nuisance, but it’s far more controllable than in Sigma. All previous content, minus online co-op, returns, giving players three additional characters to play as in a tag team mode and Ninja Race. The only odd omission is blood and gore, which was reintroduced in Ninja Gaiden Sigma 2 Plus on PS Vita. It would have been a nice olive branch to those who missed the blood and gore stripped out of Sigma 2 in 2009, but it’s mysteriously absent in the Master Collection.

Rounding out the collection is Ninja Gaiden 3: Razor’s Edge, which has the best camera of the three titles but remains the weakest in gameplay, narrative and design. Despite this, Razor’s Edge does feature many of Sigma 2’s quality-of-life improvements that make it feel the most modern of the bunch. There are also three additional playable characters that players can take into the main campaign through Chapter Selection. It’s a significant improvement over base Ninja Gaiden 3 and offers mindless fun to the Master Collection. 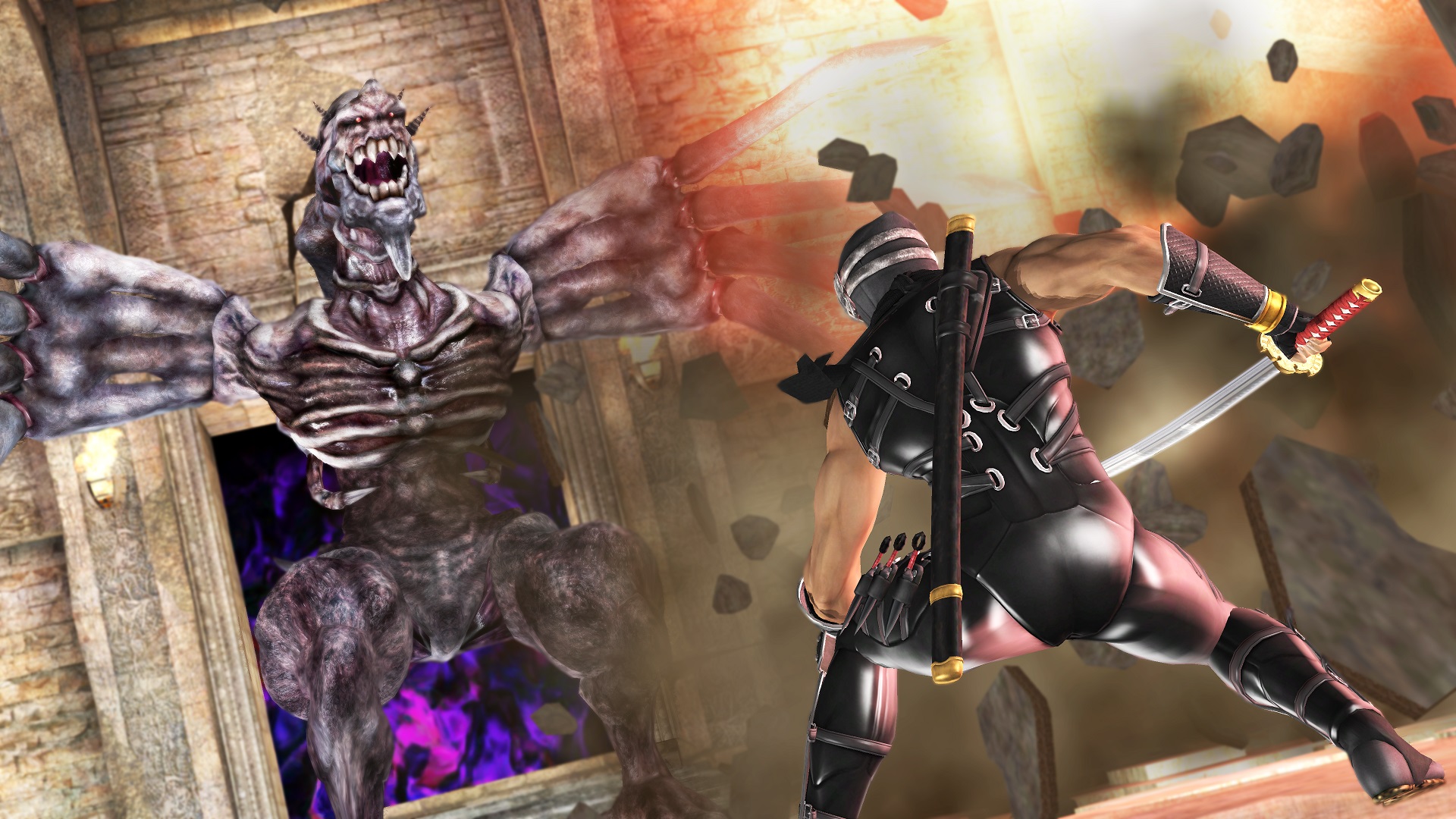 Ninja Gaiden: Master Collection is no doubt the best-looking and playing version of the three games. The game runs at a 4K resolution and smooth 60fps on next-gen and last-gen enhanced consoles. On the base consoles, the game runs at 1080p and 60fps. Finally, on Switch, the game drops down to 720p at 60fps. These are the best-looking and smoothest playing versions of Ninja Gaiden Sigma, Ninja Gaiden Sigma 2 and Ninja Gaiden 3: Razor’s Edge. Despite this, the Ninja Gaiden: Master Collection’s presentation feels like it’s only doing the bare minimum.

Cutscenes in both in Sigma and Razor’s Edge look compressed and just don’t offer great viewing (Sigma 2 mostly manages to escape this compression issue). Effects like fire, water and rain don’t hold up well on modern displays. There are even odd audio bugs that can cause background music to cut out or alter the volume. While Sigma 2 and Razor’s Edge hold up better, the assets in Sigma needed some extra work. Ninja Gaiden: Master Collection puts in the bare minimum updating its presentation even though at least one of the titles required more of a remake. 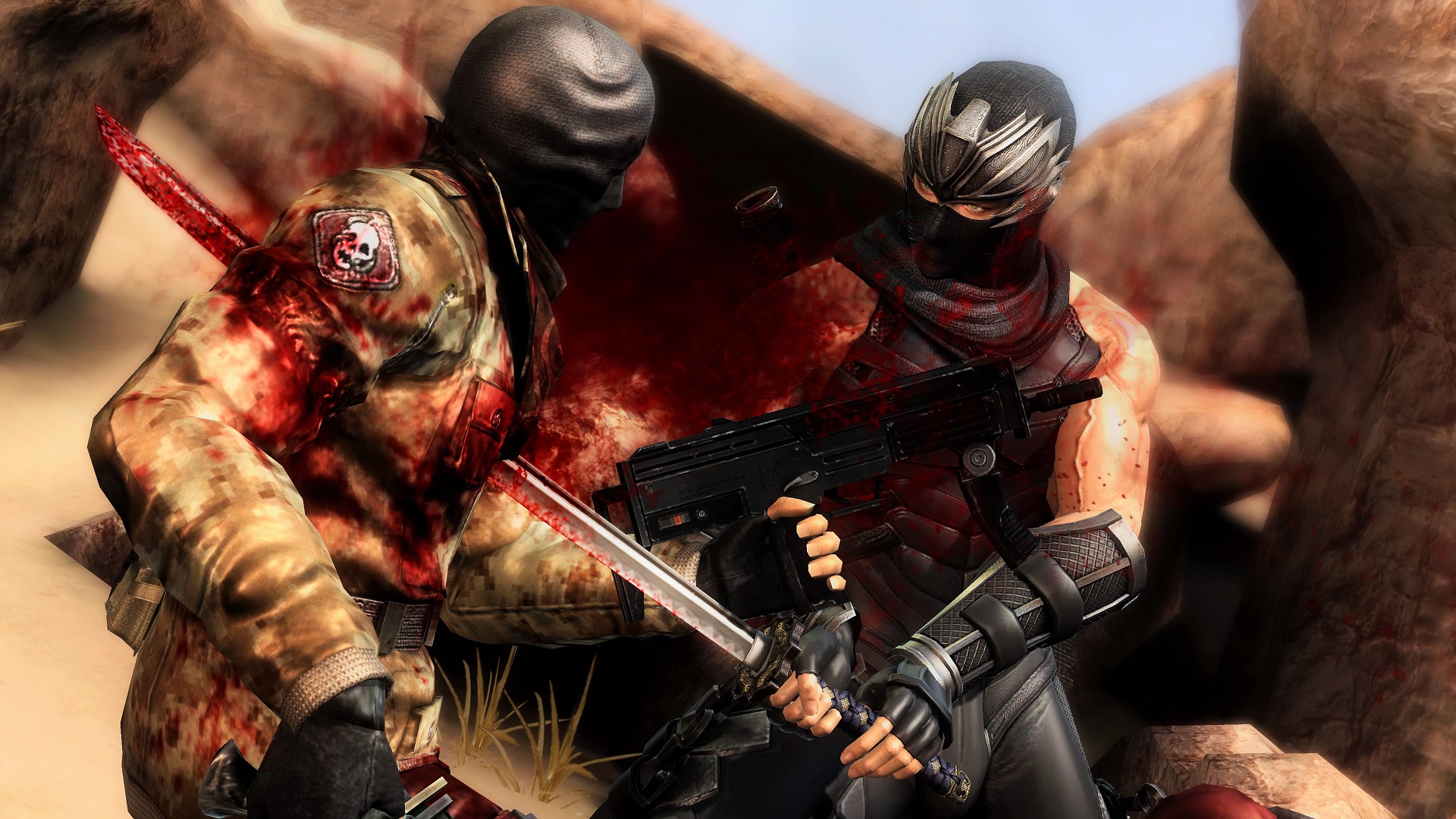