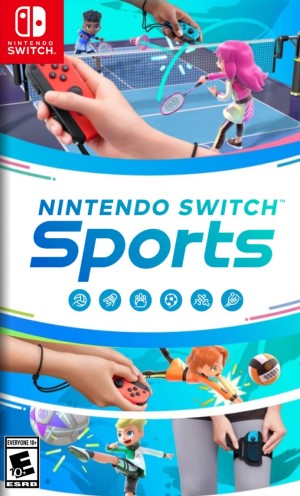 Nintendo is often associated with its legendary roster of iconic gaming mascots that have continued to reinvent their approach to gameplay to both remain relevant and occasionally push the medium forward with new entries that still somehow manage to surpass high expectations. So it came as a surprise when Wii Sports, a pack-in title that launched with the titular platform in 2006 that paid no homages to the characters that shaped Nintendo’s past, found itself at the center of a new push for motion-based gaming due to its broad appeal for gamers of all ages and skill levels. The simplistic mechanics combined with the appeal of partaking in athletic activities without having to leave the house to create an international phenomenon that, for the time, seemed like the future of interactive entertainment. Ultimately, as Nintendo released two less successful sequels and Sony and Microsoft both dabbled with their own takes on motion-based gaming, the fascination with these styles of games had already reached its peak in the early years of the seventh generation of consoles. But as Nintendo’s latest platform continued to break sales records, many started to wonder if the Joy-Cons could recapture the motion-based magic of the Wii Remotes without the need to set up a sensor bar or attach a dongle to improve its accuracy. Enter Nintendo Switch Sports, a package of new and returning sports that introduces online play to the franchise and aims to recapture the spirit of Wii Sports over fifteen years later.

Unlike Wii Sports Resort, which put a much larger focus on single player experiences to flesh out each of the dozen sports, Switch Sports focuses all of its progression mechanics in the online experiences, which can also be played against randoms, friends or bots for those who aren’t paying for a Switch Online subscription. After an introductory match against relatively easy bots to help players find their footing, completed matches and additional in-game factors will bestow points that can be used to randomly unlock rotating collections of cosmetic items, gear and other modifiers for your customizable Sportsmate. Nostalgic players can replace their head with a Mii face, but that does block off a noticeable portion of the apparel that can be used, such as hats and glasses.

Additionally, after finishing ten matches in each sport, players will gain the opportunity to compete in the Pro Leagues, where wins and losses will impact your letter-based rank to ideally help players compete against those of their own skill level. Like with most online matchmaking systems, it doesn’t always play out this way, as we still encountered highly-ranked players in early Pro League matches, but the waiting times are reasonable and the system as a whole still offers long-term potential for those who truly want to dedicate themselves to their one or two favorite sports. Plus, players who prefer a more casual experience can still play each of the sports locally against bots with three difficulties, including a surprisingly challenging Powerhouse option that will require your best performances to pull out a victory. 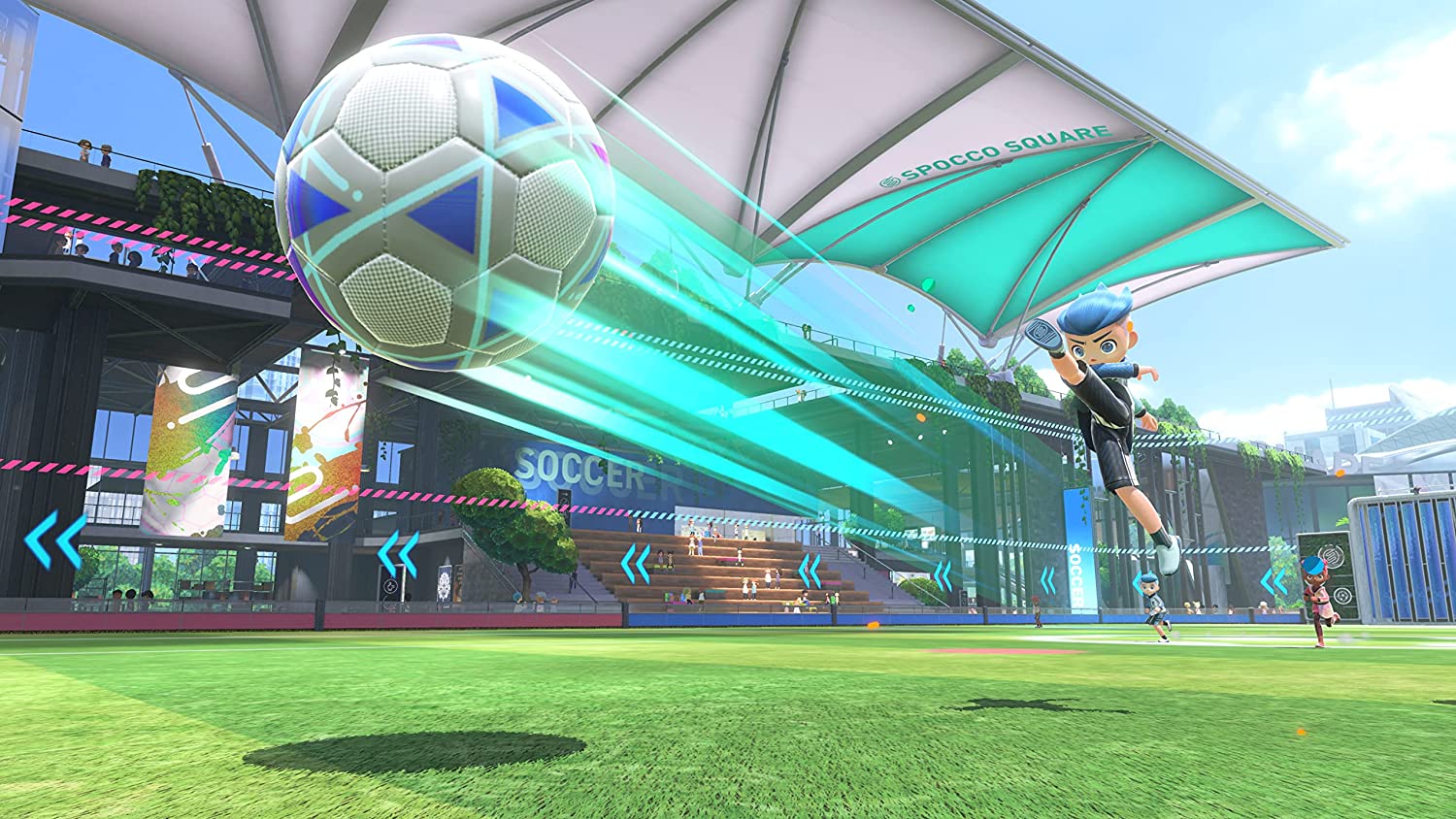 At launch, Switch Sports offers six sports to choose from, with golf arriving via a free update in the Fall. For fans of the original Wii Sports, tennis and bowling both make their return and feel largely unchanged from how they played fifteen years ago, but with odd changes for the former. Despite offering options for one to four players, there’s no longer a singles option for tennis, as competitors are forced to control two players at once and manage both ends of the court based on the automatic positioning of each teammate. Additionally, while offline tennis sticks to traditional scoring rules, the online version reduces the complexities to award victory to the first team that reaches seven points with at least a two point advantage.

Meanwhile, offline bowling offers both standard and special modes with the latter adding moving obstacles and lane deformations to create a more varied challenge that encourages creative thinking with throwing angles and ball spin. Unfortunately, neither of these modes are available online, with Nintendo instead opting for Survival Bowling which eliminates members of a sixteen player competition based on performance through a set of frames. Although this twist initially sounds appealing, the base skill level of online bowlers is shockingly high, meaning you’ll need to bowl a near perfect game just to make it out of the introductory rounds. This ultimately leads to quick bouts of bowling that don’t provide the same level of satisfaction as a completed ten frame match, which would be a wise addition to include for online players in a future patch. 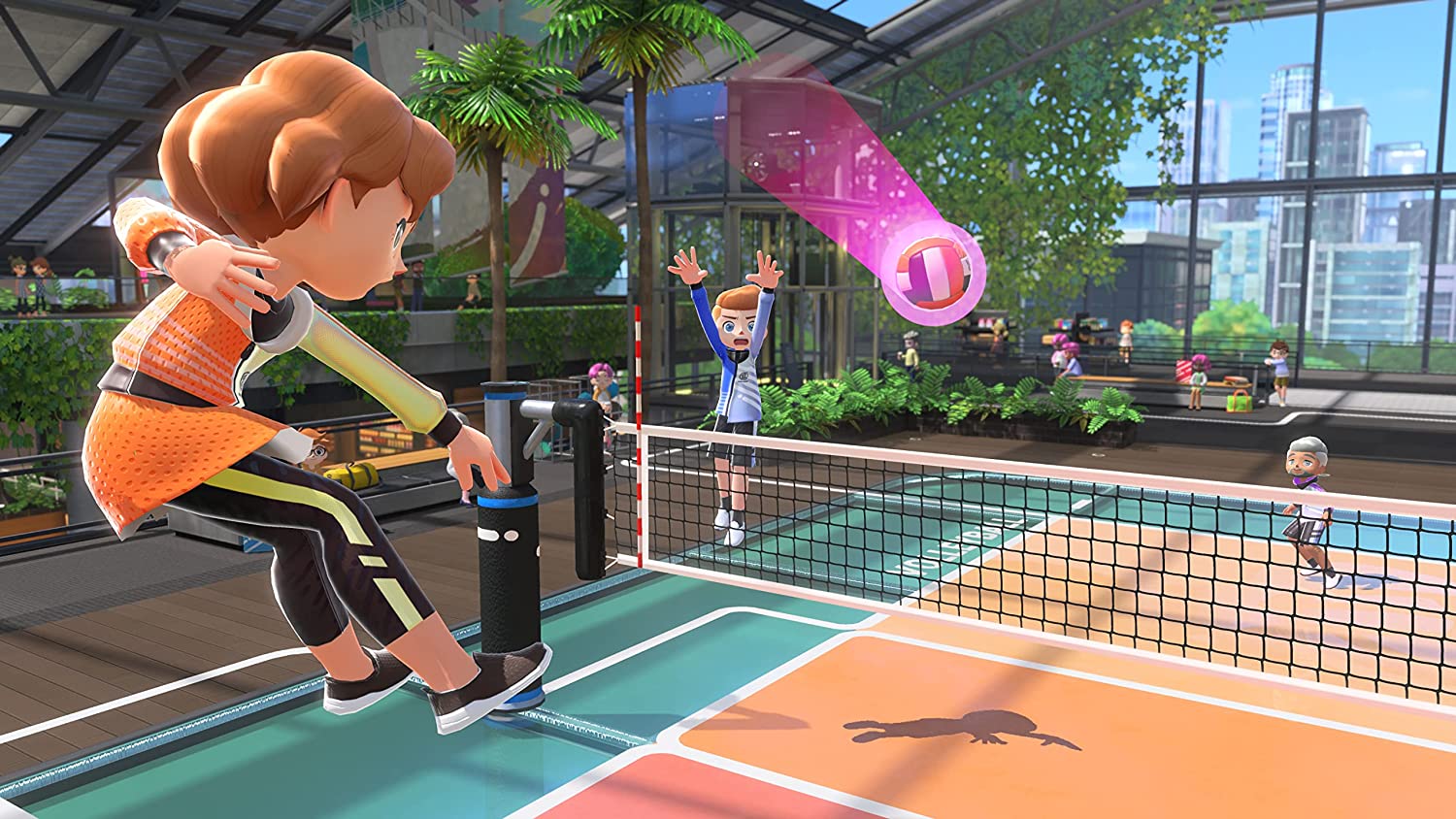 At first, chambara seems like the Swordplay Duels that were a highlight of Wii Sports Resort, as two players are pitted against one another on a small circular platform above a pool and are tasked with knocking their opponent into the water. In addition to the standard sword, however, chambara also offers a charge sword that gradually gains power through successful guards to unlock a boosted attack, which quickly renders the regular sword redundant. Players can also use two Joy-Cons to take advantage of twin swords that have a meter-based spin attack, but those who are looking forward to wailing on their opponents with alternating attacks will likely be left disappointed by the integrated cooldowns of each swing. These matches are often the quickest to play through and reward players who make more precise swings, as opponents who rely too much on guarding can be countered by matching your swing with the direction that their sword is pointing.

The remaining three sports are entirely new additions, although there was understandable speculation after the reveal trailer for Switch Sports about just how differently badminton would end up playing from tennis. Fortunately, badminton ends up being a surprise highlight of the collection as players are tasked with enduring long volleys of lobs, spikes and drop shots to catch their opponent off guard, out of position or simply without enough energy to return the shuttlecock. Both badminton and chambara end up being the most physically tasking sports available, but the satisfying feeling of landing a well-placed spike that results in a poor return shot or a dive that falls just short is hard to top and will likely keep players coming back for more after a quick break. The one-on-one nature and varied shot types of badminton ultimately helps it feel more precise than tennis where general swings are typically enough to keep the match going. 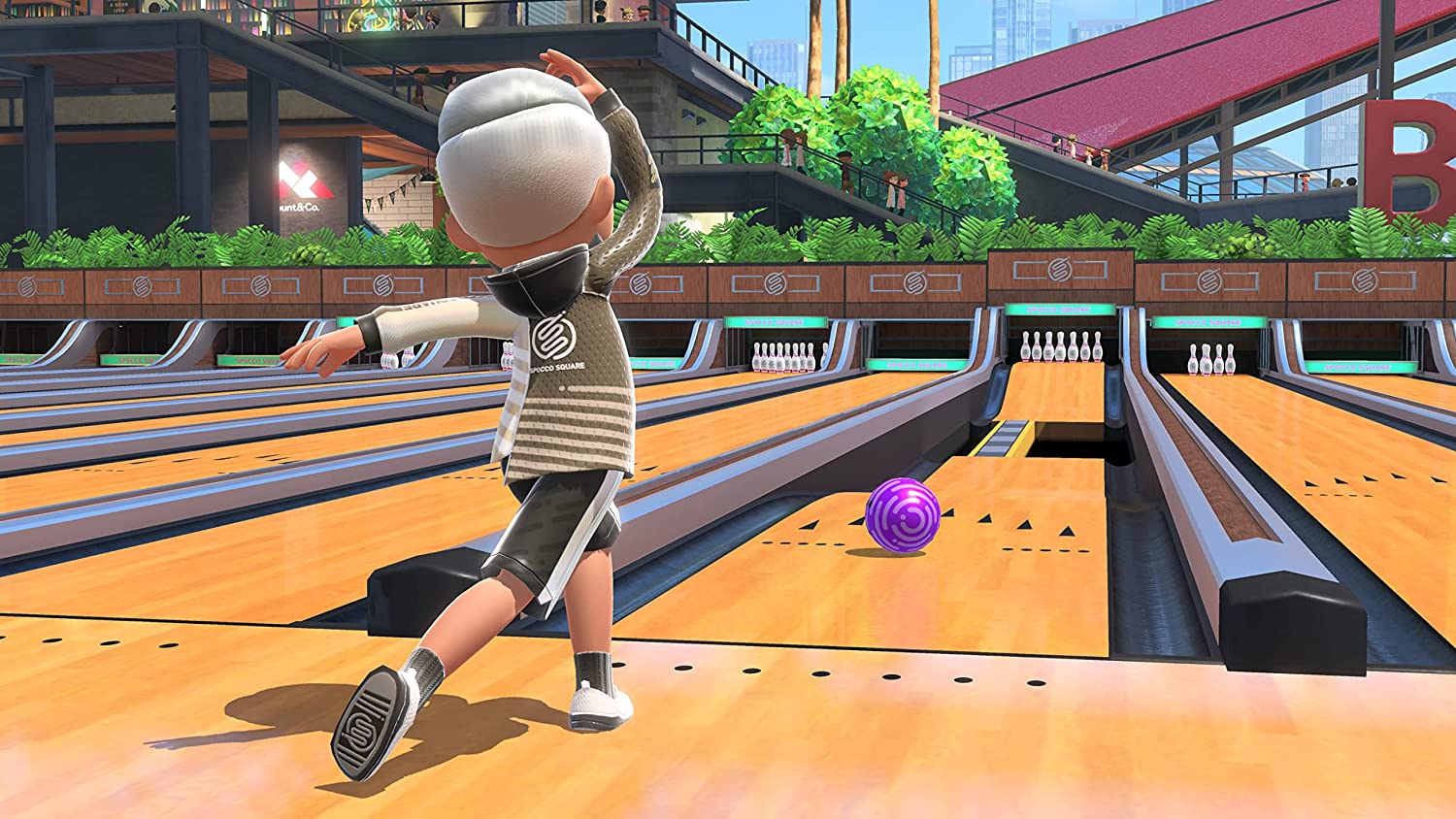 Both volleyball and soccer place a heavier emphasis on teamwork as opposed to solo skill, but the formulaic nature of the former does considerably less to excite. The event relies heavily on bumps, sets and jumps to block an incoming shot or spike an outgoing one, but the game explicitly tells you which one to do instead of providing players the opportunity to figure it out for themselves, leaving little room for error and making long volleys feel expected instead of earned. Much like badminton, the spikes do feel engaging to perform, and the ability to have slight manual control of your avatar when they are close to the net is welcome, but relying on the same three moves over and over makes this sport quickly feel more repetitive than any of the others.

Finally, soccer completely forgoes the automatic movement and allows players to freely move, sprint and jump across the field in 1-on-1 or 4 vs. 4 matches, with individual swings of the Joy-Con to kick the ball in a given direction and coordinated swings of both controllers to perform a risky but powerful headbutt maneuver. While the player can freely control the camera as well, it will default to automatically tracking the ball, which is mostly useful but can lead to some awkward kicks when trying to launch the ball in a different direction from where the camera is facing. Each teammate has a stamina meter that must be carefully managed to take advantage of open shots on the goal or to properly defend your own net, especially in solo matches where you are your only backup. To ensure neither team gets too far ahead on the scoreboard, golden balls are introduced to help create opportunities for a comeback or ensure a knockout victory, while sudden death rules are introduced in the event of a tie as the goal size widens to help end long-running matches. Without the leg strap add-on, soccer feels the least like the sport it’s trying to imitate, and the option to swap between teammates while playing offline would be welcome, but as it stands, soccer represents one of the more fleshed-out activities available in Switch Sports that will likely entice players looking for a more traditional gaming experience with added motion controls.

The simplistic menu design and brief tutorials for certain sports helps newcomers get straight to the action as quickly as possible, making it just as accessible for players of all ages as previous Nintendo sports games. The graphical presentation does expectedly little to amaze, but the upbeat music brings back classic themes to match the energetic on-screen action. For a developer that has often received criticism for not matching the standards of other online titles, Switch Sports has a mostly solid online multiplayer experience, with reasonable matchmaking times and no mid-match disconnects or lag to disrupt the gameplay. Plus, nearly all of the sports can be played locally with the two Joy-Cons that come included with the Switch, with soccer being the only one that requires multiple pairs if you want to face another person in the same room. 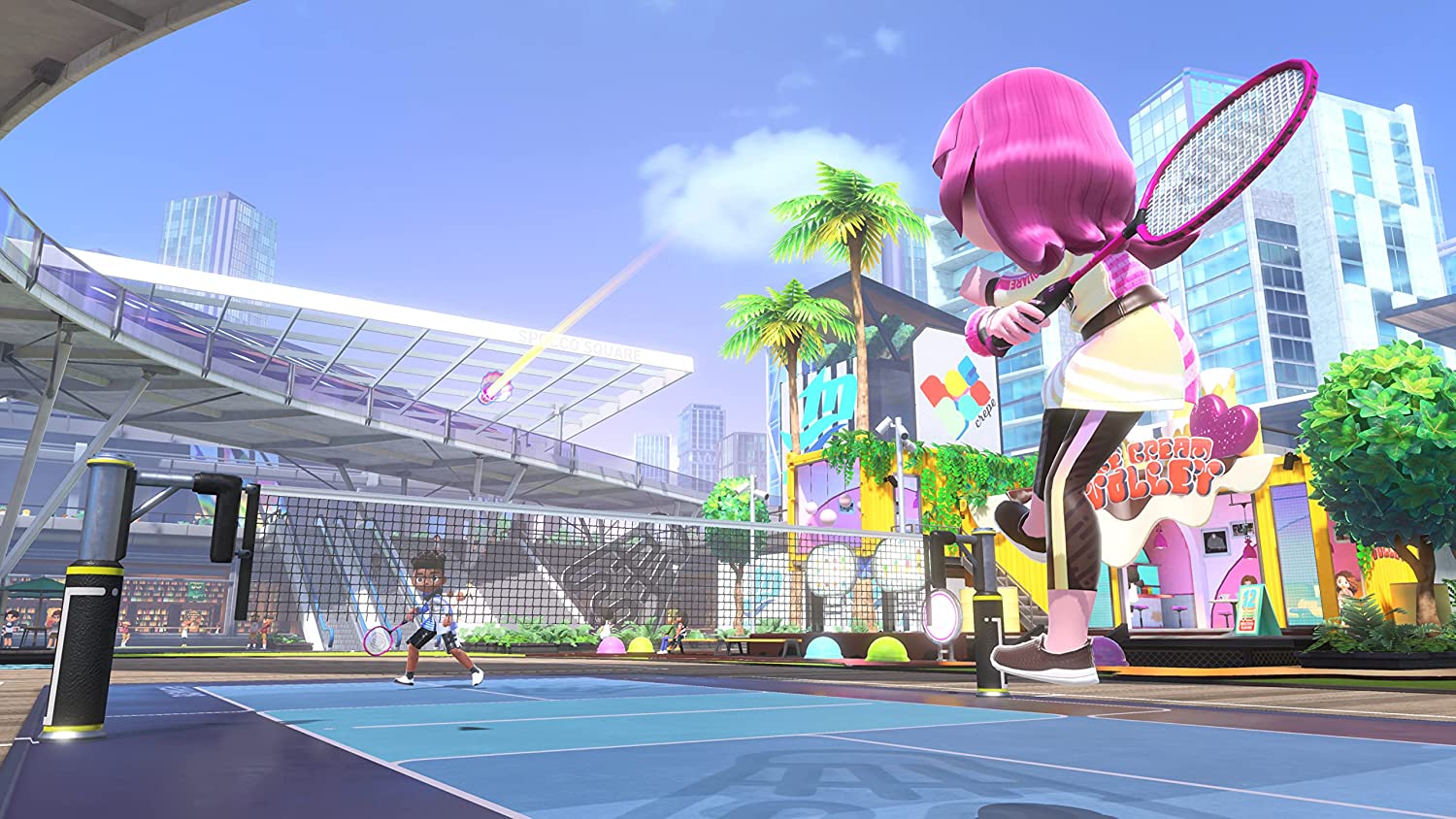 Nintendo Switch Sports doesn’t revolutionize motion-controlled gaming, but instead brings it back at its peak with six enjoyable sports that play great locally or online. Some events, like volleyball or tennis, may feel more shallow than their compatriots, and the absence of a traditional online bowling mode against strangers is hard to overlook. But whether you’re looking to rise through the Pro League ranks or for a fun afternoon with family and friends that doesn’t involve sitting on the couch, Nintendo Switch Sports has plenty to offer gaming fans of all ages that are looking to clash swords, score goals or knock pins.