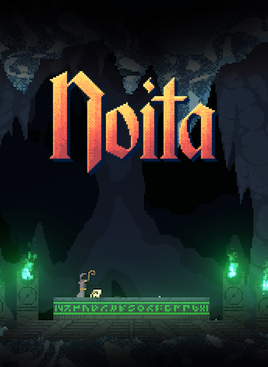 A couple of years back, I wrote a piece in which I argued that roguelikes/roguelites required more than the appeal of randomization to succeed. That simply riding the curtails of “an endless amount of possibilities” — or other such sugar-coated descriptors — would not only reveal limitations, but would in fact throw a spanner in the works from the get-go. That algorithms and formulas could never match the same kind of experience deliberate, hand-crafted environments usually garner. In one way, it’s actually pleasing to see part of my original argument proven partially wrong with a game like Noita. For a game that could be described as quintessentially roguelike — start a run, see how long you can last, go again — there are merits to developer Nolla Games’ approach here. Merits that quickly (and by quickly I mean past the first, head-banging-against-wall hour spent) emerge and grant the randomly-generated layout a little touch of the engaging and the enjoyable alike.

Naturally as someone far from in awe with this genre of games, it says something when a basic premise of survival and going as far as one can in one life is as appealing as this. And the reason for this lies in one of Noita‘s key mechanical ingredients — one that isn’t dictated by luck — namely its use of in-game physics and the elemental/reactive nature both its environments and the bevy of spells/magic that Noita‘s emergency gameplay can bring. While on the surface it may seem like every one of Noita‘s generated, subterranean caves to descend through poses a simplistic structure, it’s this implementation of physics and how every element can pose both a benefit and a hindrance where a lot of Noita‘s lasting appeal stems from.

The bigger plus is that little of Noita‘s governing “rules” as such are explained. Aside from a few button prompts at the start of each new run, players are left to figure out a lot of what is and isn’t possible here. That may sound strange to describe the lack of explanation of such interactions as a plus — not least because the first hour or so is as frustrating an affair as you can get. But this is where the emergent joy and little “ah-ha” moments of Noita stand out. Deducing a clever shortcut between two points by simply blowing part of the environment up; figuring out how to guide a pool of water down to a lower-level fire blocking access to a new item. Just seeing these thousands of pixels, representing dirt, wood, steel, water and acid interact with each other. Critically, how the game cleverly uses changes in sound to explain how dangerous such a thing like a growing fire might be. Eventually in some scenarios: the initial satisfaction of clearing a pillar blocking access to a precious health item…only for those emotions to flip upon realizing (too late) you hadn’t accounted for the nearby explosives. Or that pool of acid building up nearby or that gaping hole beneath said pillar as you see that coveted item tumble into the lower depths beneath. 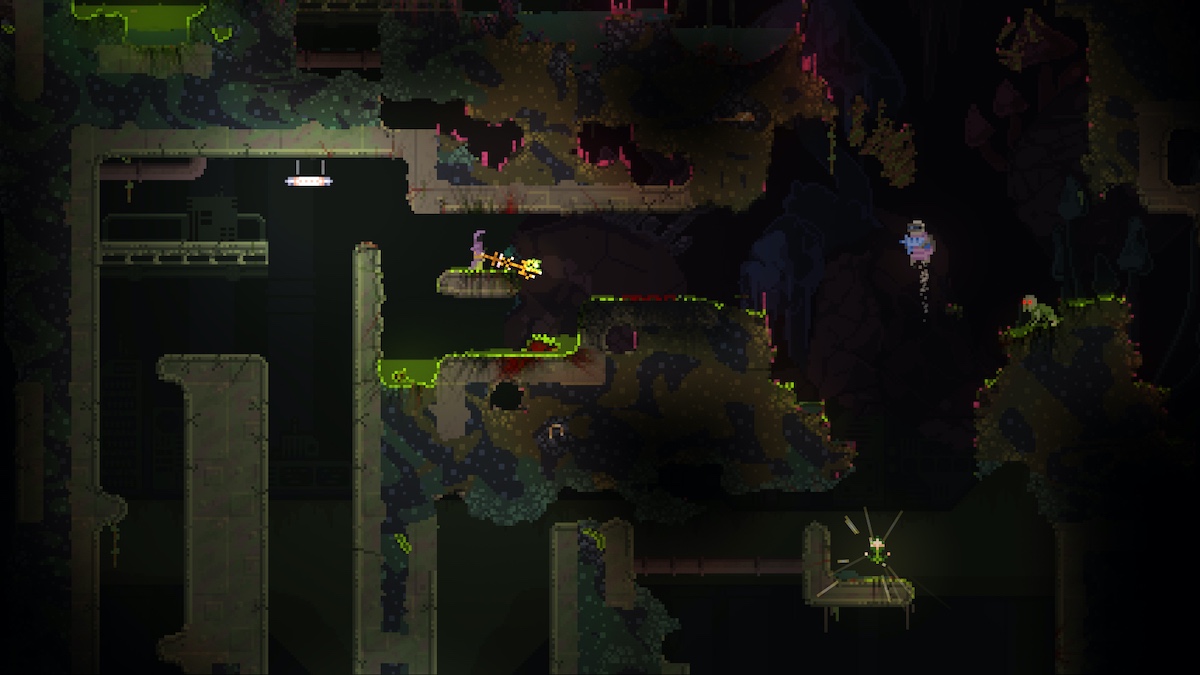 It’s not every day that you find satisfaction in failure, let alone that which you yourself have administered. To see both physics and pixel art combine in such a joyous burst of visual and mechanical splendor. But this is exactly what Noita does and is all the better for it. It’s one thing to usher intrigue or curiosity as to how one can affect or even alter the environment put before them, it’s another to see one’s actions (cleverly mapped out or otherwise) play out in the kaleidoscopic, grainy explosions that many screens can often be flooded with. And Noita is a vibrant flurry of such — a fitting accompaniment to the enclosed, darkened interiors that can only be pushed aside through the most calculated and cautious of exploration. One leap or meter-fueled levitation at a time. A smart design choice on top; that players are given a charitable time to use their levitation ability upon exploring. The accompanying catch and thus risk being that relying too much on such a meter during uncertain times could leave you open to many an enemy type waiting in the unseen darkness.

While it may seem a little off-putting that enemies can incur a costly loss to health, that’s not to say that there aren’t plenty of avenues and means with which players can deal with them. Or at the very least, avoid them entirely. Doing so does mean that your stash of money — the means with which you can purchase or even upgrade wands you acquire mid-run — can end up limited, but all this is but one of the many ways Noita encourages players to voluntarily take greater risks. Usually there are around two, maybe three portals players can scout out — all of which transport you to the next resting place to regain health and purchase upgrades — and while these sought-after exits are usually right at the bottom of each environment, there’s usually plenty of enemies and higher-level foes to sniff out to either side. 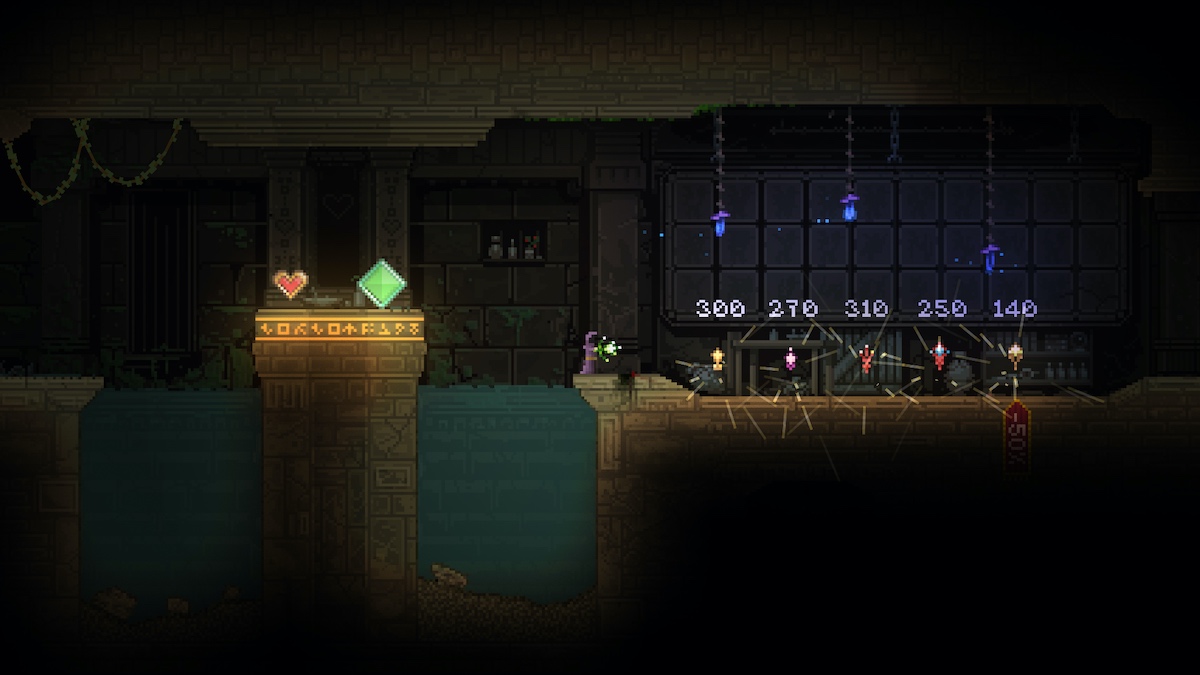 Players can of course spend as little or as long as they want, but it isn’t long before the obsessive sprint to each portal slowly weens from a priority and utmost desire to one you’re convinced you can possibly hold off on in the pursuit of more gold. So imagine the feeling of regret (but another blessing on the game’s longevity, to admire) when that decision to hold off on traversing another portal, goes incredibly awry a few seconds later. Experimentation with the game’s variety of spells and abilities is also another area where Noita makes the most of its short-burst set-up. Though players will acquire wands with randomly-assigned variables and upgrades and spell types, it’s in-between dungeons where you can mix-and-match specific traits. Not just in making the highest damage-dealing weapon available, but also one that can help in traversal — not least when elemental reactions and physics play an even more vital part in later regions.

This is perhaps one of the more surprising parts of pulling-power that Noita has going for it. Easy as it may be to simply resort to trashing anything that isn’t a wand with seven or eight magic slots to assign, Noita isn’t just some min-max affair. That’s on top of the allure of its physics, admittedly where most of the draw of the game lies to be similarly discovered and conquered. It’s disappointing though that a lot of the same discovery pertaining to its many hundreds of spells and abilities is something you have to blindly invest in and hope for the best. Upgrade moments, strangely, refusing players an explanation on spells other than some vague descriptor. Given that these items are usually costly affairs (varying from $100 to $200 for the more beneficially-implying abilities), it can often seem like players are required to just trust in the descriptions and hope it’s something you’re after. 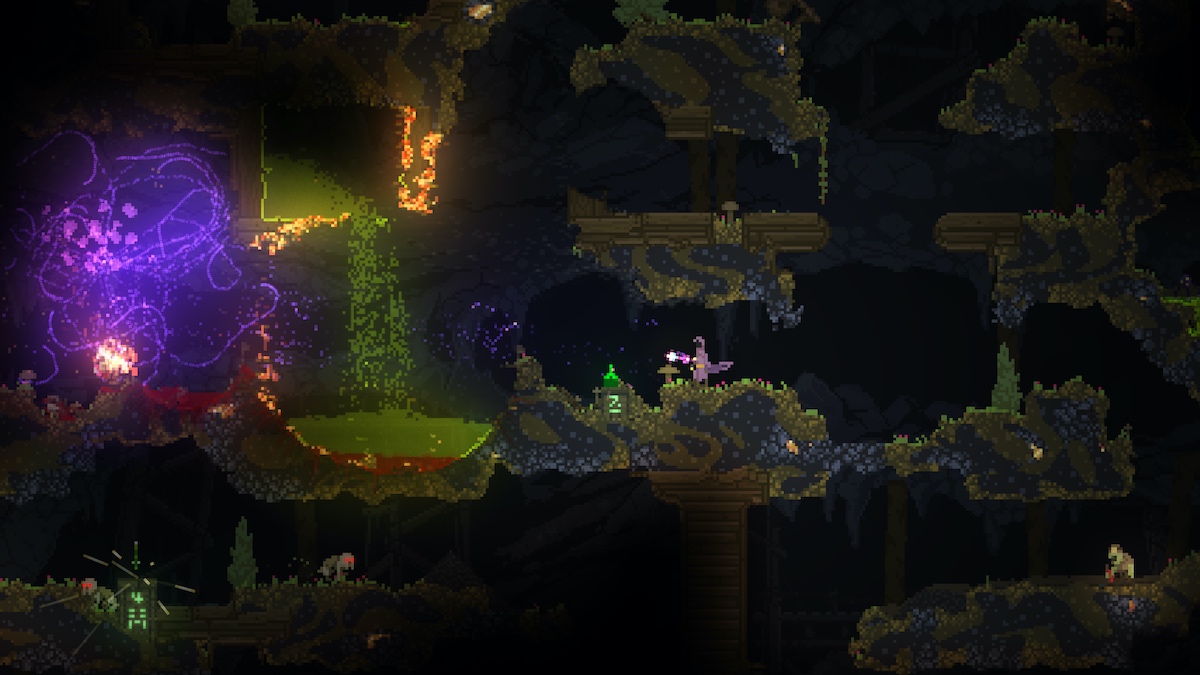 The randomization of Noita‘s many run-throughs can also at times feel less like hard-fought accomplishment and more just unwarranted luck. In some instances, players can start with relatively buffed and powerful wands — that make the early parts of progression a ridiculously-easy affair — as opposed to other moments where wands are assigned one trick and the need for caution is apt. Wands and even some potions can also be found from the off relatively quickly, without much exploration or engagement with enemies. This wouldn’t be a problem if the spectrum to which wands are assigned certain skills wasn’t as broad or as unpredictable as it is. One minute you’re overwrought with good luck, the next you’re barely making it past the first layer. Eventually once you start to see this unpredictable sway — from single-slot wands to seven-slot, overly-buffed power-houses — repeat after countless sessions, it doesn’t take long for Noita‘s roots as a roguelike to get a little too much in the way. Less taking away from the challenge it poses, more the game’s success at balancing out emergence with pure luck is wavering.

It might not have been all too frustrating a presence had Noita been a game built around permanent progression and knowing that every standalone run counted for something. Some may not consider it to be that big a case against of course, but it’s unfortunate that there’s no means of upgrading or leveling up your robe-wearing character outside of the core loop. While this does keep each session entirely fresh and self-contained — emphasizing the utmost importance in planning ahead and making the most of the abilities temporarily granted — it also opens Noita up to the pitfalls of roguelike design. Namely the unfair deaths by way of an off-screen, projectile-firing enemy or the fact the game doesn’t always translate the perils of hazards in its blatantly pixel-heavy aesthetic. Getting caught on fire, or frozen in place, by way of a literal couple of pixels on-screen? It’s only because the game does good on its subtle use of sound and general visuals that these annoyances are as obvious to spot as they are. 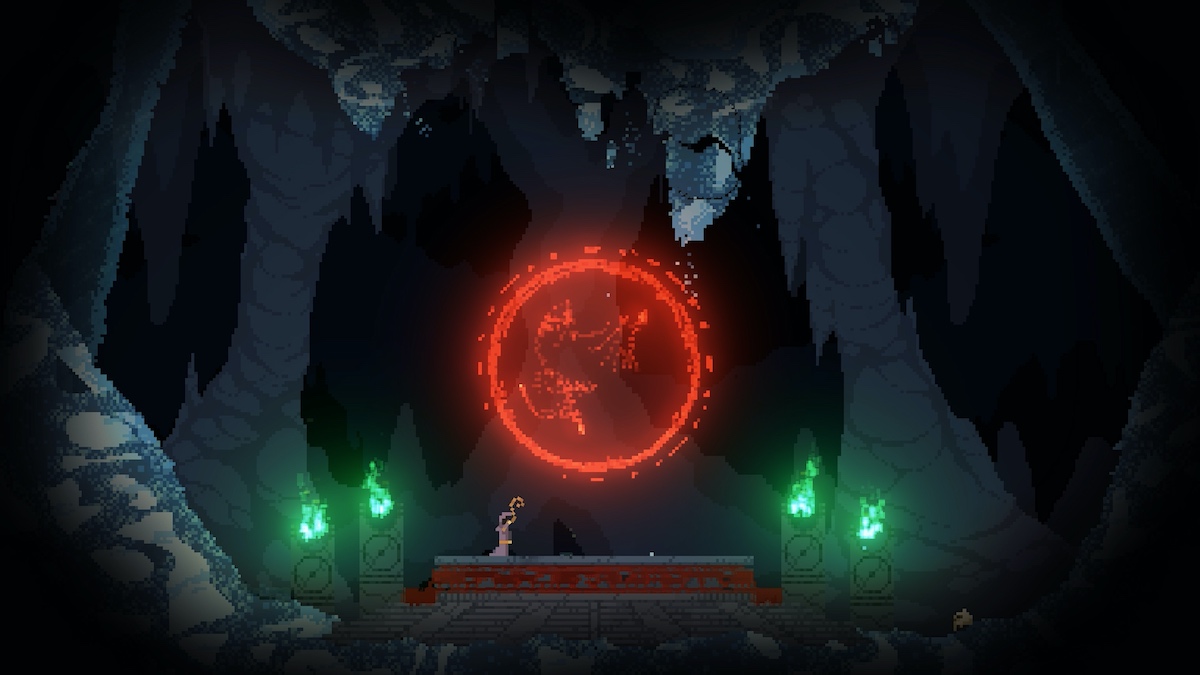 Like any roguelike, Noita‘s — as much as the player’s own — fortunes can falter in that they’re heavily-reliant on the luck of the draw. And while the rendering of such can dart wildly from fortunate to unfortunate in the blink of an eye, what Noita lacks in consistency it makes up for with its presentation and its mechanics. From its simulation of physics to the environmental puzzle-like layout brimming with potential and consequence alike, the pixelated visuals and flashes of color are far from the excessive distraction it may initially paint. It’s this reason why Noita works and why even those who look at roguelikes the least favorably will find great appeal in this game. Both as a roguelike and the kind of short-burst, pick-up-and-play experience you can take immense satisfaction from figuring out. Whether it’s for a single hour of investment or a fair number of them. Straightforward and occasionally frustrating the set-up may seem, Noita‘s hands-off approach to instruction and allowing player-made discovery to bloom is one sought-after trait in gaming that here pays off time and time again.