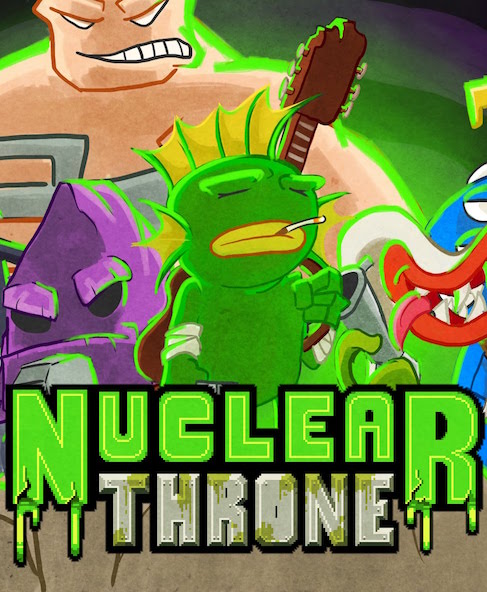 Here’s an indispensable piece of advice for the Nuclear Throne neophyte: never relax between stages. As the population of each dwindles, their corpses dotting the otherwise surprisingly tidy Wasteland, an illusion of omnipotence is proportionately reinforced – what’s a lone sniper and a handful of rats to a level 6 Crystal with a triple machine gun and a grenade launcher? This insidiously decelerating natural rhythm, an inversion of the classic video game convention that dictates levels should be getting progressively harder, tends to engender a false sense of security that will be responsible for more player deaths than any of its bosses.

A top-down roguelike of excruciating difficulty with a visual aesthetic that oscillates between cuteness and morbidity, Nuclear Throne at first brings The Binding of Isaac to mind. Like Ed McMillen’s masterpiece, it features a series of short, claustrophobically confined levels packed with throngs of enemies whose patterns one must learn by heart so that their attacks will be anticipated rather than merely reacted to. There is a range of characters to wander its post-apocalyptic world with, each favoring a specific approach to its numerous hazards. Fish, for example, can accommodate riskier players by quickly rolling out of harm’s way, while Plant’s power of entangling enemies suggests a more cautious, calculated type of play. Further variety is provided by an assortment of weapon types (running the technological gamut from wrenches to laser cannons) and level upgrades, or mutations, including such inspired choices as Hammerhead, which allows you to push inside walls either to create a temporary safe space from the bullet-hell outside, or to tunnel your way to an inaccessible enemy from an unexpected direction.

Its core mechanics, however, owe an even greater debt to a pair of rather unexpected sources. Like the geoms of Geometry Wars, Nuclear Throne’s rads can only be absorbed when approached and will rapidly fade into nothingness if they’re not. These chunks of green radioactive mass, dropped by fallen enemies and bottled inside mud-caked containers, however, are no simple score multipliers. They’re the game’s equivalent of experience points, the only way to ensure the crucial upgrades that go with leveling up – neglect them and you’ll be seriously underpowered in the harder stages. The need for constant movement to collect rads brilliantly eliminates the possibility of passive, overdefensive approaches. Sniping from a distance to clear an area stops being an option for players wishing to survive beyond that and every second spent in-game becomes an agonizing choice between risking it all into the fray and holding back until it’s just a little bit safer. 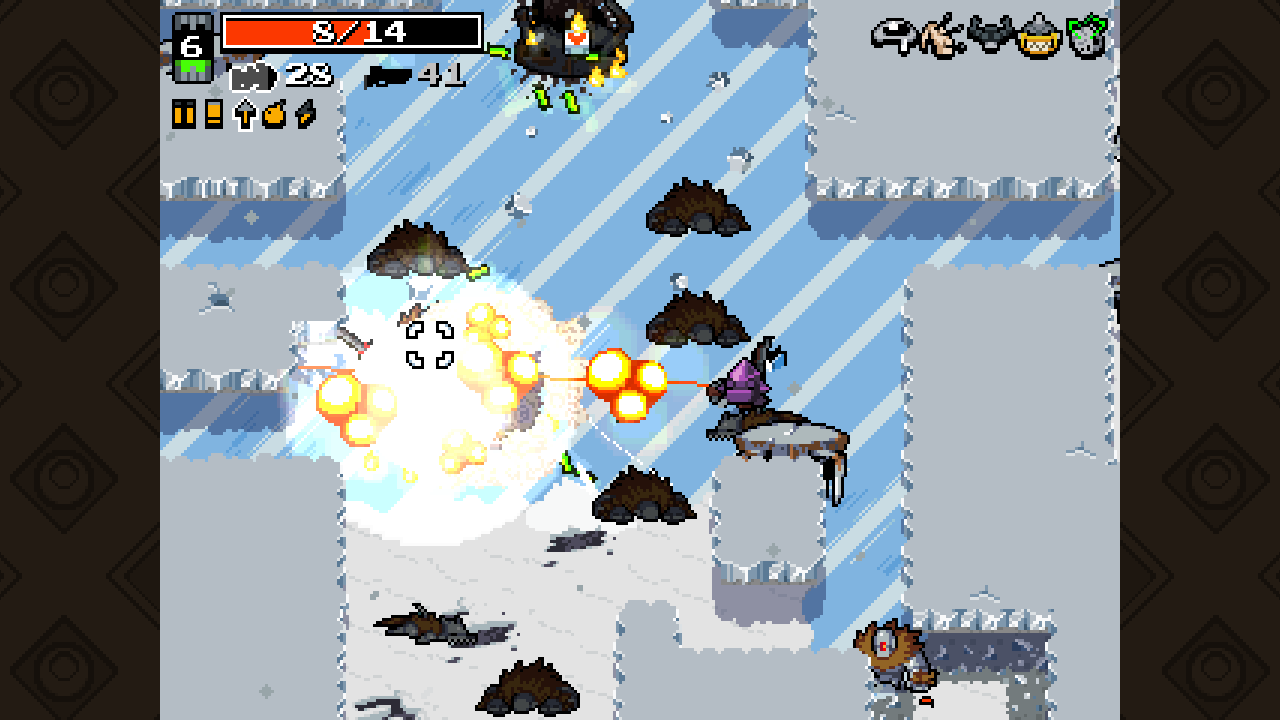 Recalling Halo is a less constant but equally painful decision: which weapons to keep and which to leave behind. There are several categories, each suited to specific situations. Precision-based crossbows can deal devastating amounts of damage to single, powerful enemies but are useless against numbers. Shotguns are excellent for short-range crowd control but ineffective for longer distances. Explosives can clear out whole sections, including your own character if used recklessly, while shovels and sledgehammers will never run out of ammo. Being restricted to just two means that you never have access to every tactical option available and a dearth of ammunition ensures that, even when you’ve found the combination that feels right for your own particular playing style, you may still be forced to change your loadout and adapt accordingly. The reference to Bungie’s classic, where the choice carried similar implications for one’s overall strategy, is even made explicit as two of Nuclear Throne’s weapons look like exact 8-bit replicas of Halo’s Beam Rifle and the legendary Gravity Hammer.

Combat feels fantastic, at least as long as one sticks to the mouse and keyboard – twin stick controllers are ill-suited to a game where conserving ammo through precision aiming is a priority. The feedback accompanying each successful attack, the squelch of a maggot exploding into slime, the momentary stagger of an enemy getting hit (perhaps buying you just enough time for a reload), the low groan of a bandit grazed by a stray bullet, all form a constellation of audiovisual cues that, while subtle, are enormously gratifying. Combined with the heft behind each attack, whether ranged or melee, and with a slightly jarring but rather exhilarating screen-shake effect, they make every skirmish a pure, visceral joy that’s unparalleled in the genre. 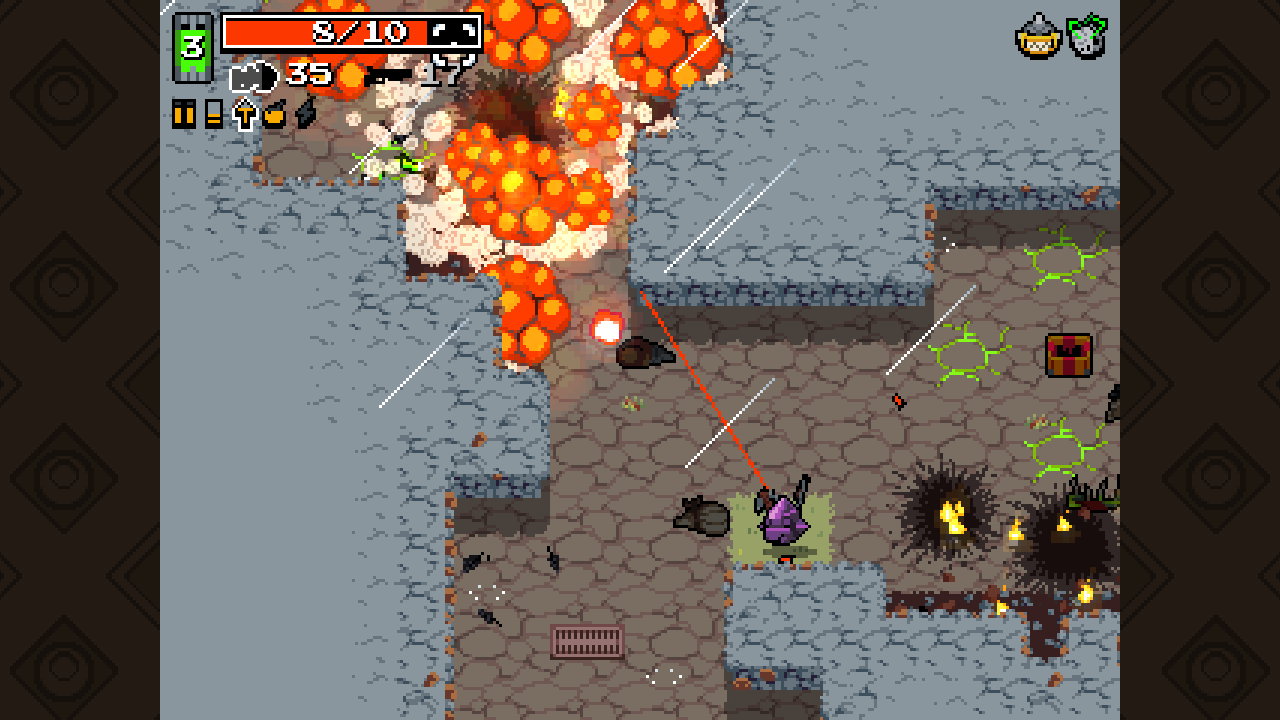 That is, unless one is disinclined to appreciate it, as a result of being too busy cursing at a game-over screen which came out of nowhere. Roguelikes are inherently unfair as part of a design philosophy based on generating random permutations, of stage layouts, of enemies, of character builds, the sum of which will result in a playthrough that may range from the favourable to the impossible. Yet Nuclear Throne’s excesses of cruelty can be hard to stomach even for the most hardcore roguelike fan. Entering a new stage always comes with a risk of dying within the next few seconds. One could emerge in the middle of an open area showered with bullets from all sides, or trapped in a small room with a couple of robot wolves and a volatile junk of a car that will explode if it takes damage. If the enemies don’t get you in these almost futile situations, then it will surely be the environmental hazards activated in your desperate scramble for safety. The ease with which the game brushes off your best efforts can be disheartening, especially since it seems to suggest that progress relies more on getting a lucky run than player skill. The feeling is reinforced by a range of upgrades that are quite uneven: get a couple of the least useful ones in a row and you may as well hit restart. In Isaac, hopeless character builds were, at least, entertaining – here, they’re just frustrating.

The fact that Nuclear Throne remains a great game despite this glaring flaw, is a testament to its excellent combat and its fantastic presentation. The sound design is exceptional overall, but special mention must be made to the outstanding intro theme – it’s what System of a Down would sound like if they were composing in S.T.A.L.K.E.R.’s Chernobyl. The visualization of the characters, on the other hand, is so perfect that, more than simply oozing personality, each points to a little narrative about their own history and place in the Wastelands, replicating Vlambeer’s similarly impressive feat with the planes of Luftrausers. 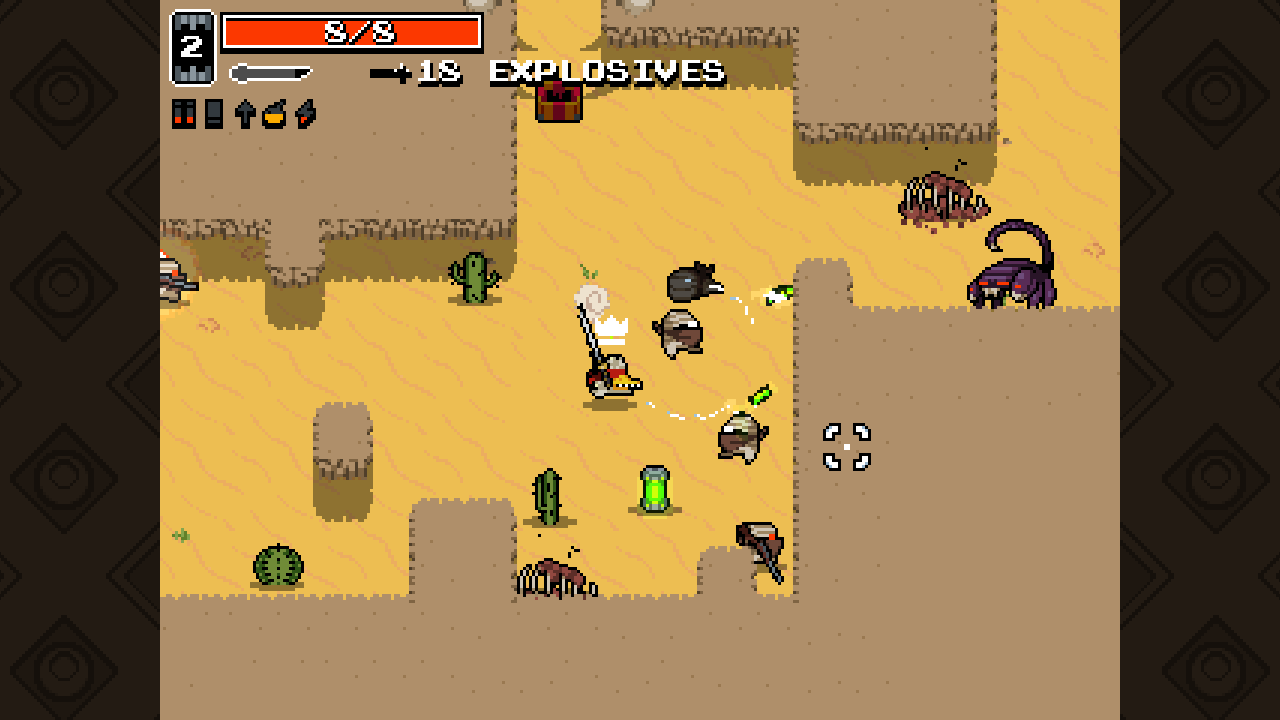 Nuclear Throne is impeccably presented and tightly designed. There is enough variety in characters, upgrades and weapons to ensure that playthroughs never get repetitive and its visceral combat is a joy in itself. Its frustrating unfairness, however, holds it back and may alienate even hardcore roguelike fans. Not the heir to Isaac’s throne many had hoped for then, but still the best action roguelike of 2015.