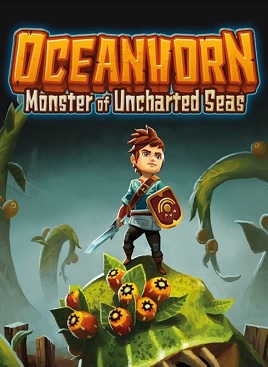 Admittedly, Oceanhorn is not exactly a new title. In fact, this adventure has seen its way to mobile, PC, consoles and select home humidifiers. The original release was in 2013, for crying out loud. Yet, despite the high proliferation of this title, I have never had a chance to actually play the thing. Publisher FDG Entertainment knew this had to change, and targeted my weak spot: the PlayStation Vita. Now that it’s been ported there, and I feel that it is my mission to at least try everything for the platform, of course it needed to be reviewed (this is a mission that has not always gone well…). After taking it through its paces, it became clear to me why it’s made its way around. It’s really, really good.

Now, one should realize from the off that Oceanhorn isn’t exactly original in the same way that cutting off an appendage isn’t an intelligent weight loss plan. It stars a boy whose father left him to go fight a monster, the titular Oceanhorn, to protect the people he loves. Leaving behind a necklace and a few memories, the father never returned, leaving the boy in the care of a local hermit. One night, the necklace floats off, as inanimate objects are wont to do. The boy searches for it, finds a sword and shield, and begins his quest to discover what became of his dad and, hopefully, finish off the monster. Along the way, he will find himself needing to collect elemental seals, acquire new equipment to surmount obstacles, and defeat all sorts of critters and monsters.

As far as gameplay goes, this is pretty much old school Zelda rotated 45 degrees and rendered in 3D. The sword swipes and spin attacks are incredibly familiar, the items found, such as bombs and a bow, are cribbed straight from Nintendo’s well worn playbook. Even the hero is evocative of the near silent Link, who can only communicate in grunts, groans, and yelps. The developer, Cornfox & Bros, obviously studied the Zelda oeuvre and transposed it into this isometric title. Still, while Oceanhorn blatantly wears its inspiration in its chest in flashing neon letters, it captures exactly what made those games so great in the first place. Swinging the sword feels right, aiming the bow is natural, and switching between items and spells is as simple as a tap of the directional pad, alleviating annoyance. 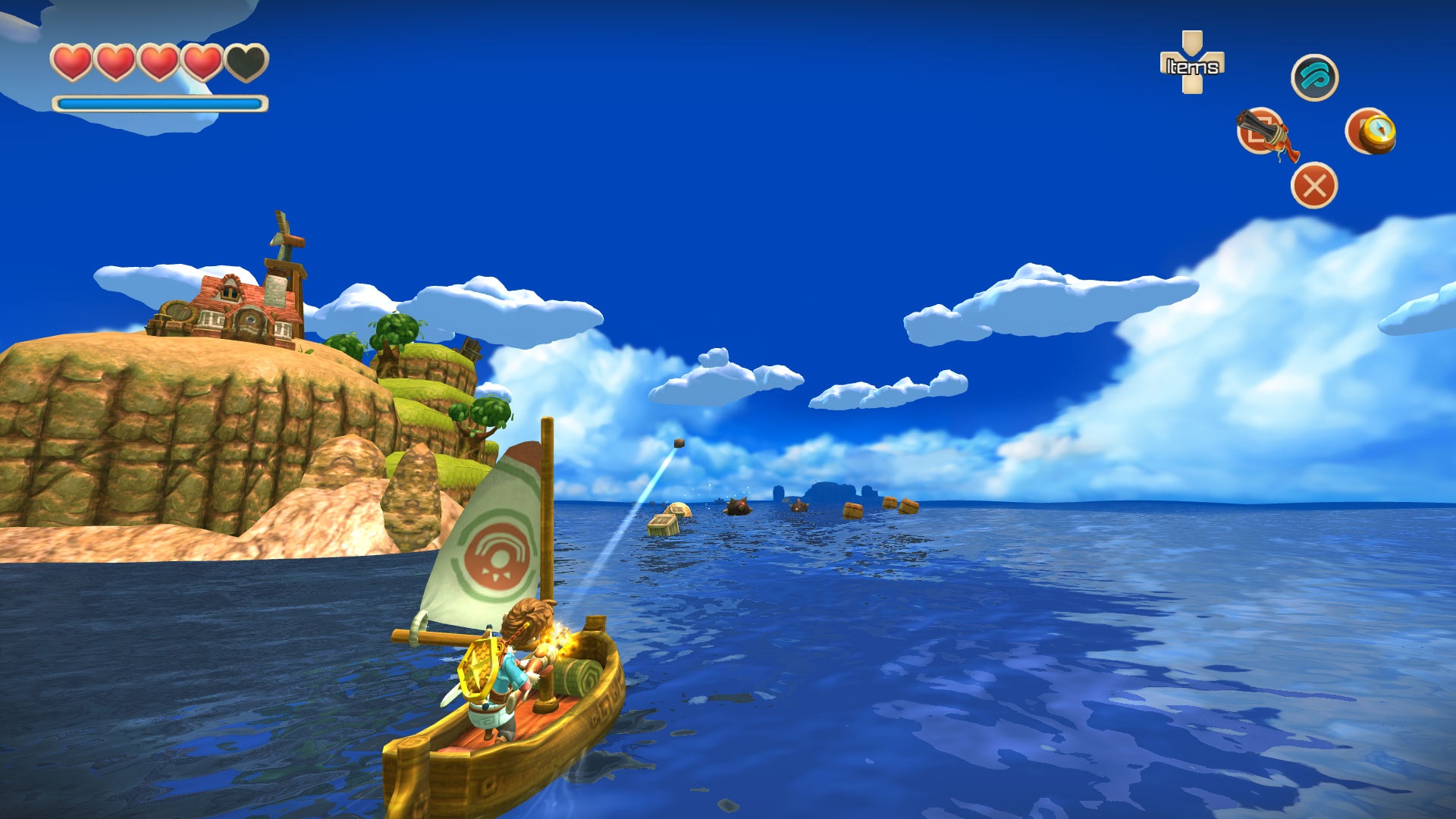 The adventure itself is somewhat similar to The Wind Waker in that the regions and dungeons are divided up into islands. The boy arrives on the beach, and proceeds with the hacking and slashing, solving both puzzles and the problems of the island’s inhabitants. What’s particularly cool about this set up lies in the fact that pretty much any island can be explored if it is available to be reeached. If a tool is required for the island, it won’t be populated on the map. If an exception to this rule is made, there is a sign at the start telling the player precisely what is needed. (Not that they say where to find it…) Considering how many different regions there are to explore, the decision to minimize the spinning of the wheels is highly appreciated.

The islands themselves are extremely well designed, too. Littered with caves and pathways, they have a tendency to fold and loop over themselves in interesting ways, encouraging exploration and keep pointless backtracking a rare occurrence. It also serves as a narrative excuse to vary up the environments. Humid jungles, arid deserts, and grimy swamps all make an appearance, each with a unique if, again, unoriginal feel. The developers are certainly exploring some well worn tropes, but they are deployed in an entertaining fashion. 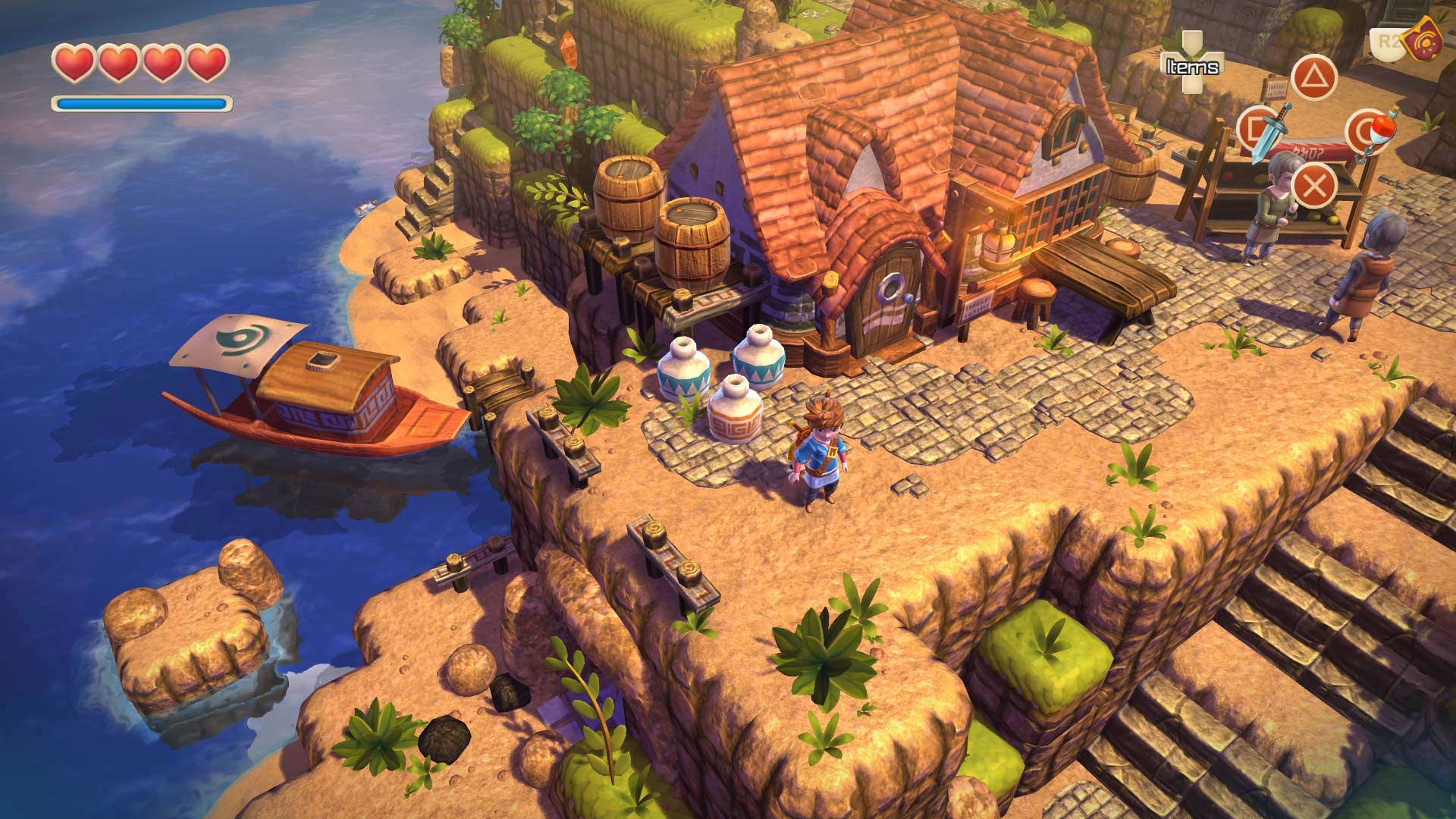 Traveling between the islands is a bit of a weak point in the game, unfortunately. Cornfox did away with needing to mess around with the wind direction, thankfully. Instead, the player accesses a map and chooses a destination. The boat automatically heads there with no need for the player to steer. All that leaves for the player is to wait, and play what amounts to an extremely slow paced rail shooter.

The other sticking point comes in the form with the game’s over reliance on box pushing puzzles. These are acceptable in small doses, but can also be extremely tedious. By their nature, these types of puzzles are one of those challenges where the player sees the solution immediately, but the implementation is time consuming. With the isometric perspective that Oceanhorn employs and the proliferation of dead ends, it’s also rather common to accidentally push the wrong block once, requiring a full reset of the puzzle.

Still, these are reasonably minor stumbles in a game that does what it does with aplomb. What’s even more impressive is just how well it works on the Vita. It’s not a graphically intensive game, relying more on a cartoon like look to convey the world, but there is lots of game. Yet, other than a slightly longer than normal load time when initially launching the game, there are no real delays. The player is able to get right to it without needing to watch a bar fill up. Certainly, this is probably due to the travel times between islands, which isn’t fun, but at least something is happening. When porting the game to the handheld, they also avoided trying to pointlessly take advantage of the Vita’s touch screen, back touch, and motion controls abilities. They just allowed the game to be the game, and made it fun. In fact, the structure of the game itself makes it perfect for the Vita, with ample checkpoints, and the ability to make progress in short sessions. 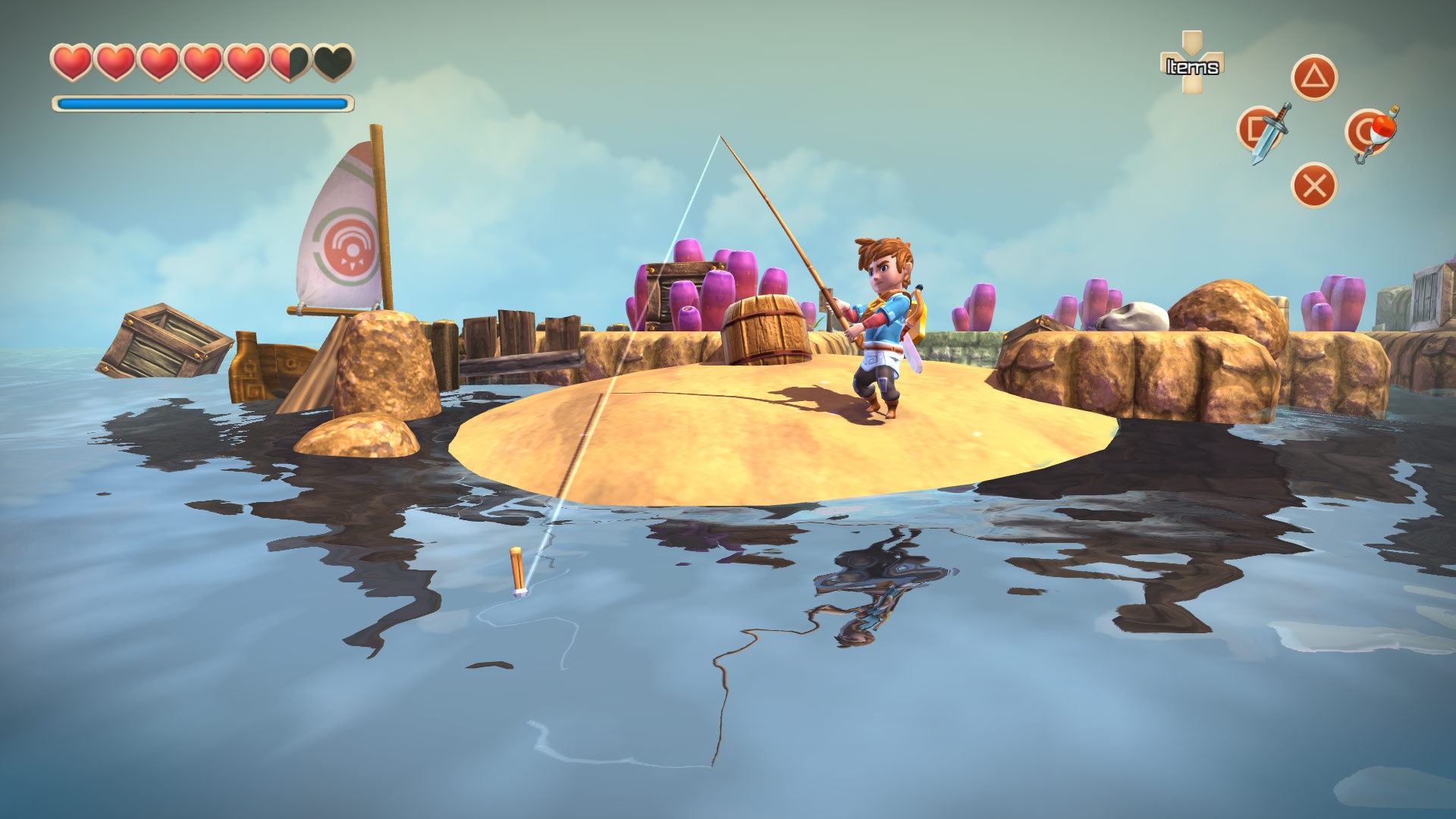 While it has been around for quite awhile, Oceanhorn on PS Vita feels like the best way to play the game. It controls well and looks great on the system. The game itself isn’t creating a new genre, but what Oceanhorn does instead is build a fun adventure using familiar building blocks that we all know. Some people might dismiss this as unoriginal and quaint, but then some people really hate fun. This is a game that earns its spot in any gamer’s library simply by expertly executing precisely what it wants to be.