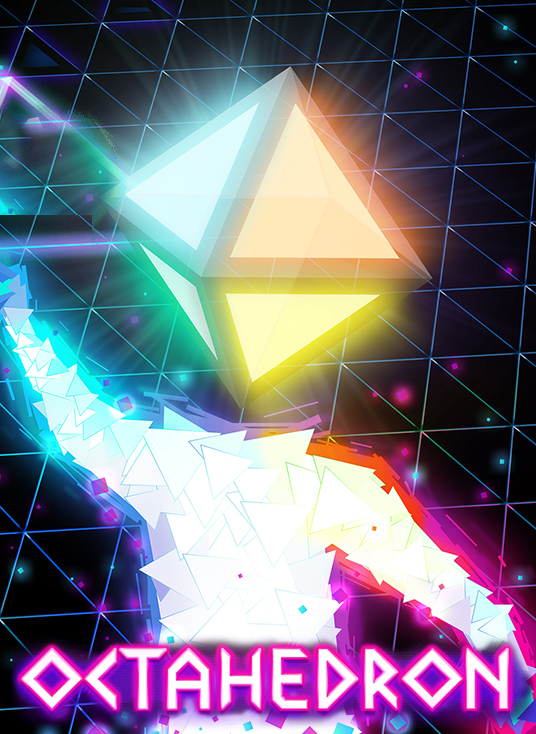 It takes eight equilateral triangles to create a regular octahedron.  It’s a nifty geometric shape, whether as a D8 or naturally-occurring crystal, but as a general rule you don’t want to replace your head with one.  The unnamed protagonist from Octahedron was at a restful getaway in the woods one day when he discovered a hole in the ground that promptly dragged him in.  Now he’s got a glowing eight-sided head and an interdimensional dance club of platforming challenges to get through.  It’s not a particularly complicated story, or even one that makes any kind of sense, but then again it doesn’t have to.  A few levels in and you’ll be in such a strange combination of murderous rage at the difficulty level while being unable to stop playing you’ll have forgotten all about it.

Ocathedron is a musical precision platformer with barely a single merciful bone in its glowing neon body.  The mechanics are simple enough, needing only two buttons and the joystick, but there’s a world of obstacles and hazards combined in devious ways that require pinpoint precision to clear.  The player moves at a decent pace, no running or acceleration involved, and can both jump and create a platform under his feet in midair.  You can only create a set number of platforms before needing to touch down again, instantly resetting the supply, and levels are designed with a specific number in mind.  It’s usually two platforms per jump but some levels drop it to one while others go to five, ten, or even rarely up to fifty.  Holding the platform button creates a midair support under your feet, and it will hang out for a few seconds before disappearing, and you can choose to either dump it early or keep it under your feet, traveling almost the full width of the screen before it flickers out.  It doesn’t take too many levels before the platform gains offensive capabilities, shooting a force beam straight down and, eventually, off to the sides.  It’s a simple set of abilities, but the level hazards play with it in fantastically creative ways.

Enemies walk around the levels needing to be avoided or dispatched, depending on the platform’s current level of firepower, but there are also rams that shoot out from the walls, blobs that object to being shot by returning fire, plants that eat platforms so quickly you can’t get a foothold, attractors and repellers that drag the platform away if it’s caught in their beam, balloon creatures that jump when you pass over them to send you into spikes or lasers, etc. Each level is themed around a specific set of challenges and they rarely repeat one to the next.  If one area’s theme is maddening it’s unlikely to make a return for another dozen levels or so, and when it does come back you’ll have had enough experience with even more difficult challenges that it feels like a relief.  It’s never easy, but it helps when you realize the environmental challenges are synced to the beat of the excellent soundtrack. 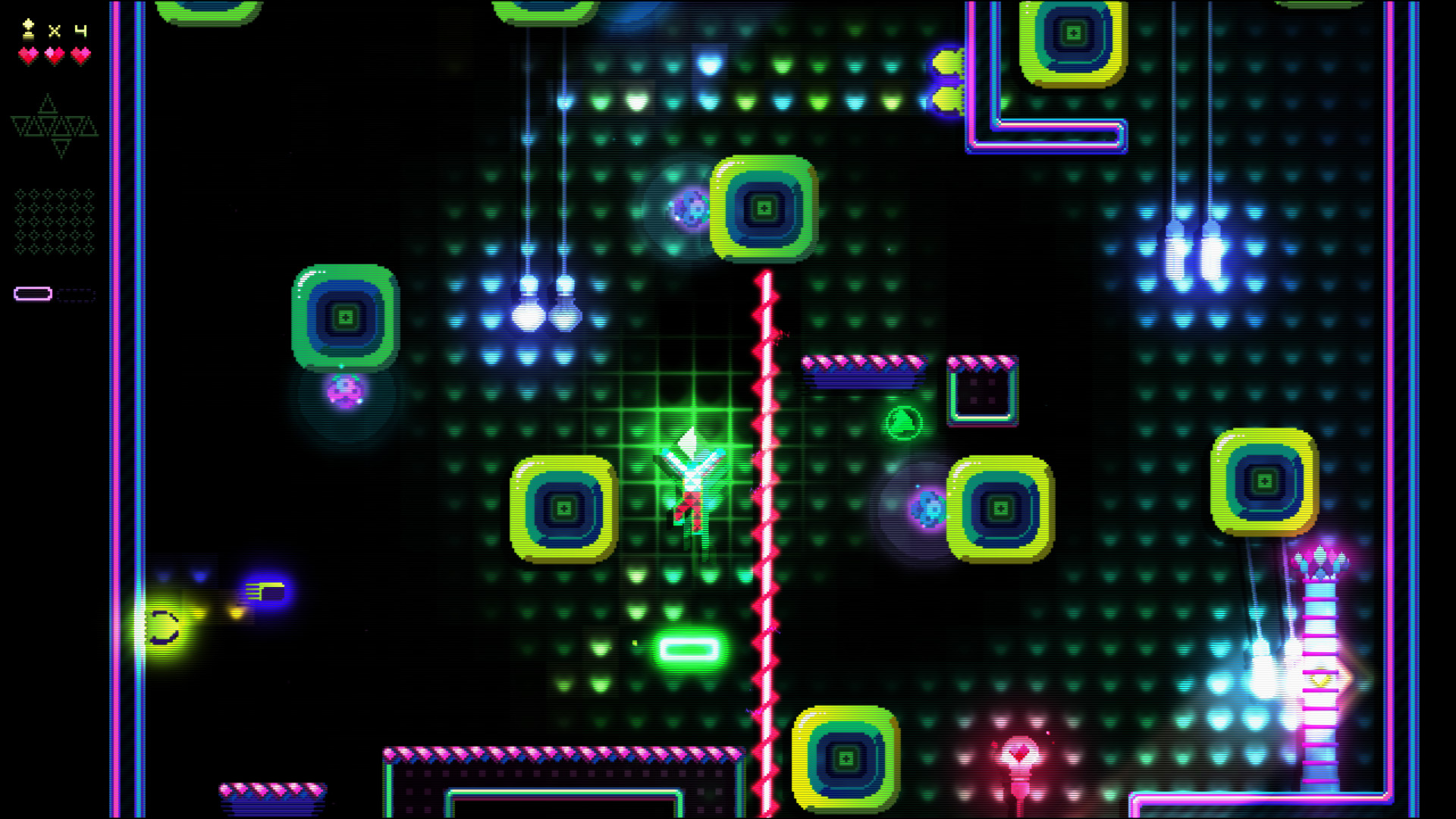 It’s hard to stress enough that Octahedron is not an easy game.  If I was inclined to cheap cliche it would be easy to call it “the Dark Souls of platformers”, except Dark Souls isn’t as hard as its reputation while Octahedron saw me rage-quit at least once a day.  Admitted, I always went back later to keep pushing onward, because it’s a problem designed to be beaten and, much like Dark Souls, once you know the trick getting through is nowhere near as hard as it once was.  As maddening as putting together a path can be it’s incredibly rewarding to zip through an area that took a dozen failures to learn, and I was honestly a bit surprised at how non-difficult the earlier areas felt when I went back to clean up a few goals.

Each of the standard levels in Octahedron has four goals to chase after.  In reverse order, Deus is getting through without dying although taking a couple of hits is ok, Par is for completing the level while creating an incredibly low number of platforms, Par 100% is the same thing except getting all collectibles, and 100% is for clearing the level with all pickups.  There are two types of collectibles, one of which is easy to get if you’re paying attention and the other of which is going to take a little work.  You can destroy the lightbulbs hanging in the levels by walking through them on your platform, which causes the bulb to drop a seed that sprouts into a flower.  Collect all the flowers and you’ve got the easy part of the goal, but the second collectible in the form of eight triangles takes a bit of experimentation.  Most of them are out in plain sight, but a couple are secrets waiting to be opened up.  Sometimes it’s as simple as noticing a subtle difference in the background covering up a hidden area, while others  require breaking open holes in the level walls to access a secret challenge area.  Some are easy to get while others are in plain sight but require god-level timing to snag.  The flowers act as currency to open up the next area, while triangles are used to access extra-hard bonus areas that grant a permanent power-up on completion.  Being able to take an extra hit per life or doubling the length of time your platform can materialize are wonderful rewards that I can’t imagine being able to complete the game without. 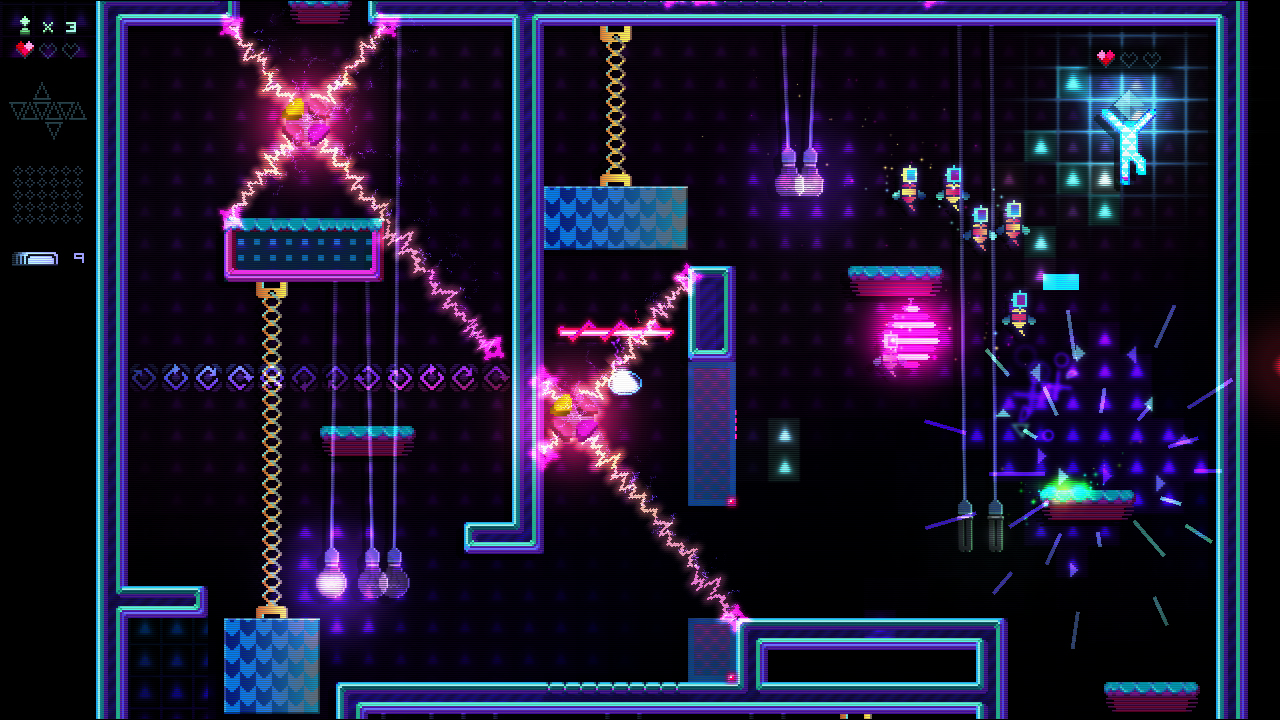 Octohedron is an incredible pure-platforming challenge designed with endless creativity.  Each level plays with a new theme, exploring its possibilities from an initial easy tutorial moment all the way through to lightly sadistic at the end, with plenty of room for play in the middle.  Finding all the secrets of each level can be a mini-quest that takes several playthroughs to unravel and some of the hiding spots for the triangles are downright devious.  Replaying the levels for completion isn’t much of a problem, though, thanks to how incredibly good the game looks and the soundtrack that pushes the action and dictates the speed of any environmental hazards along the way.  Octahedron is an incredible challenge and one that easily inspires creative bouts of swearing, but with a little bit of practice you’ll be dancing through levels that seemed impossible like a polygon-headed disco-ninja.