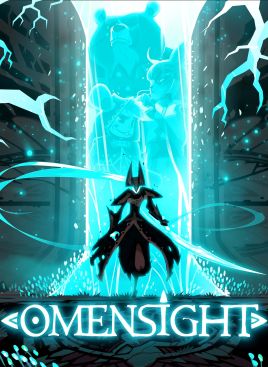 Developers Spearhead Games made a name for themselves with Stories: The Path of Destinies, a game that revolved around a fantasy tale where the player was encouraged to explore as many branching narratives as possible, going through each path and discovering new information concerning the greater scheme of things along the way. As you can see, though, we noted that the premise had a lot of potential, but the execution left a bit to be desired. And now here’s Spearhead again with their new action RPG Omensight, which indeed elaborates on the idea of branching narratives by turning them into an investigation tool for a full-on murder mystery. But is this new twist a genuine improvement or does Omensight also fall short of its lofty ambitions? Well, let’s end that particular mystery by saying that it’s the former and dive right into the game’s mesmerizing mystery instead…

Omensight takes place in the fantasy land of Urralia, where things haven’t been going so well. War has broken out between the lands of Pygaria and Rodentia, leading to carnage that has raged on for the longest time. Even worse, the Godless-Priestess Vera has been murdered, which has not only enraged a few people, but has also triggered events that have led to the reawakening of Voden, a massive abomination of a creature that destroys Urralia. As the Harbinger, a mysterious silent figure destined to only show up when the world is ending, this is where you come in. Your goal is to track down Vera’s soul by revisiting the final day leading up to the apocalypse again and again, in an attempt to figure out whodunnit, what happened and what you can possibly do to drive back a deadly cosmic force.

It kind of goes without saying that the story is the biggest selling point of Omensight, and sure enough, it doesn’t disappoint. As one may expect, a fantasy murder mystery is going to have several twists and turns, with each new encounter with the characters leading to new journeys that provide more clues and revelations concerning the connections between everyone, along with their pasts. It’s the type of tale that starts out relatively simple, then gets more complex and has you salivating for answers. Luckily, the game provides a virtual peg board of sorts to check out, informing you of all the clues and moments in the timeline that you’ve collected so far. Or for those who appreciate a challenge, you can choose a difficulty setting that turns off the hints and go full detective, having to takes notes concerning any notable info each character says, which is a welcome inclusion. 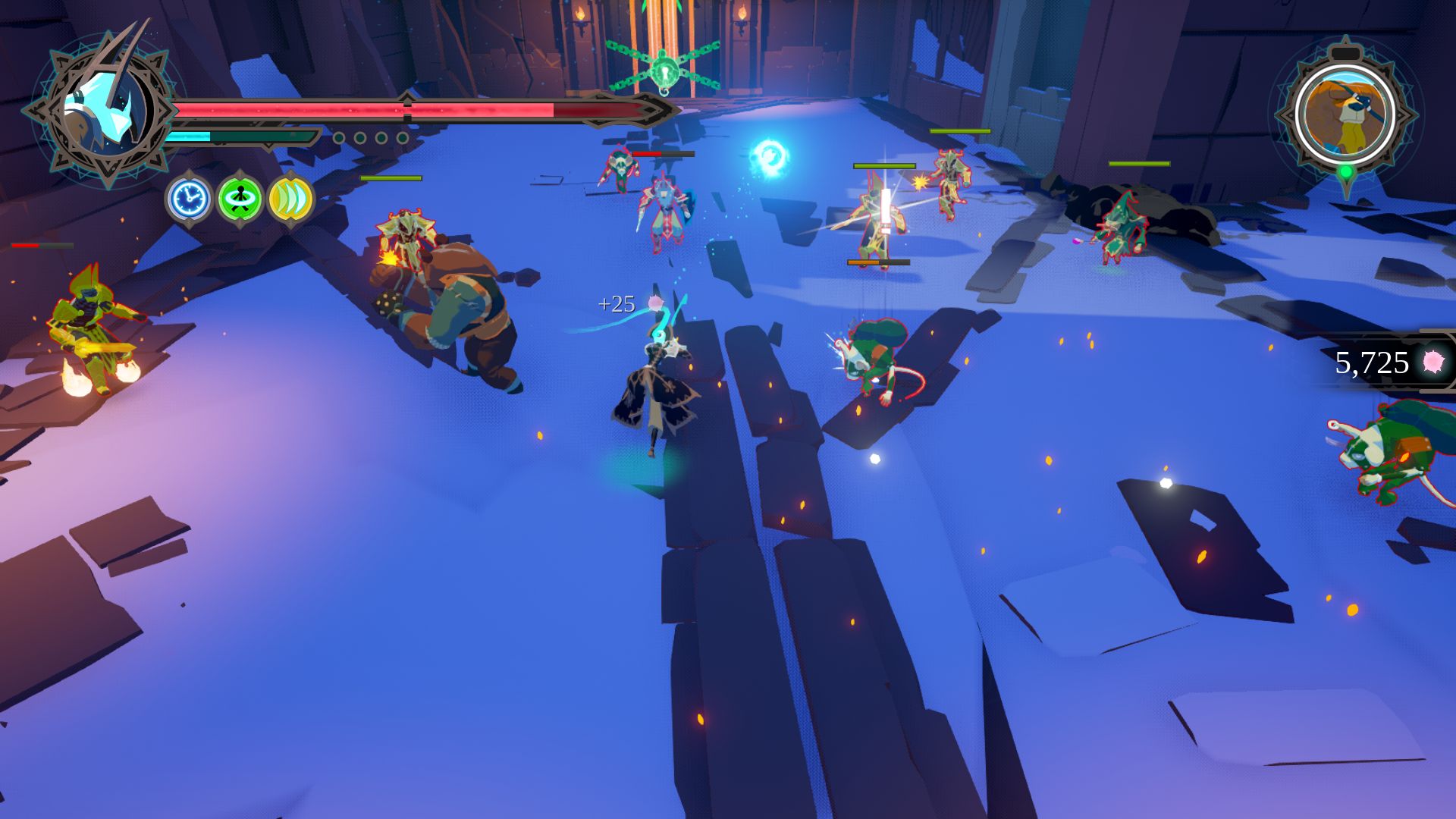 The story is also bolstered by a batch of highly likeable characters, from the wise-cracking and feisty rebellious leader Ratika to the serious yet wise general Draga. It helps that the voice acting is top-notch, letting each personality shine with just the right amount of cartoonishness (befitting the anthropomorphic animal designs). Speaking of which, Omensight is an absolute joy to behold thanks to its art style, painting the landscapes with a variety of colors that pop and make each setting stand out. Each day is divided into dawn, afternoon and evening sections, each one lighting up the surroundings in an enjoyable way that makes for some attractive battlefields.

Speaking of the various sections for each day, the main gameplay sees you traversing through various lands and battling enemies along the way, assisted by one of the four unlockable partners. At the end of each day, doomsday strikes and you’re warped back to the area outside of time where the mysterious Witch informs you of new developments, and where you can spend various experience and currency on new abilities and upgrades, per RPG tradition. Over the course of the game, you can gain the ability to slow down time, fling enemies around, or dash across the screen, then beef these skills up or max out your health or energy, or allow your allies and their various attacks to deal more damage among other things. It’s standard upgrade procedure, but it still works perfectly here. 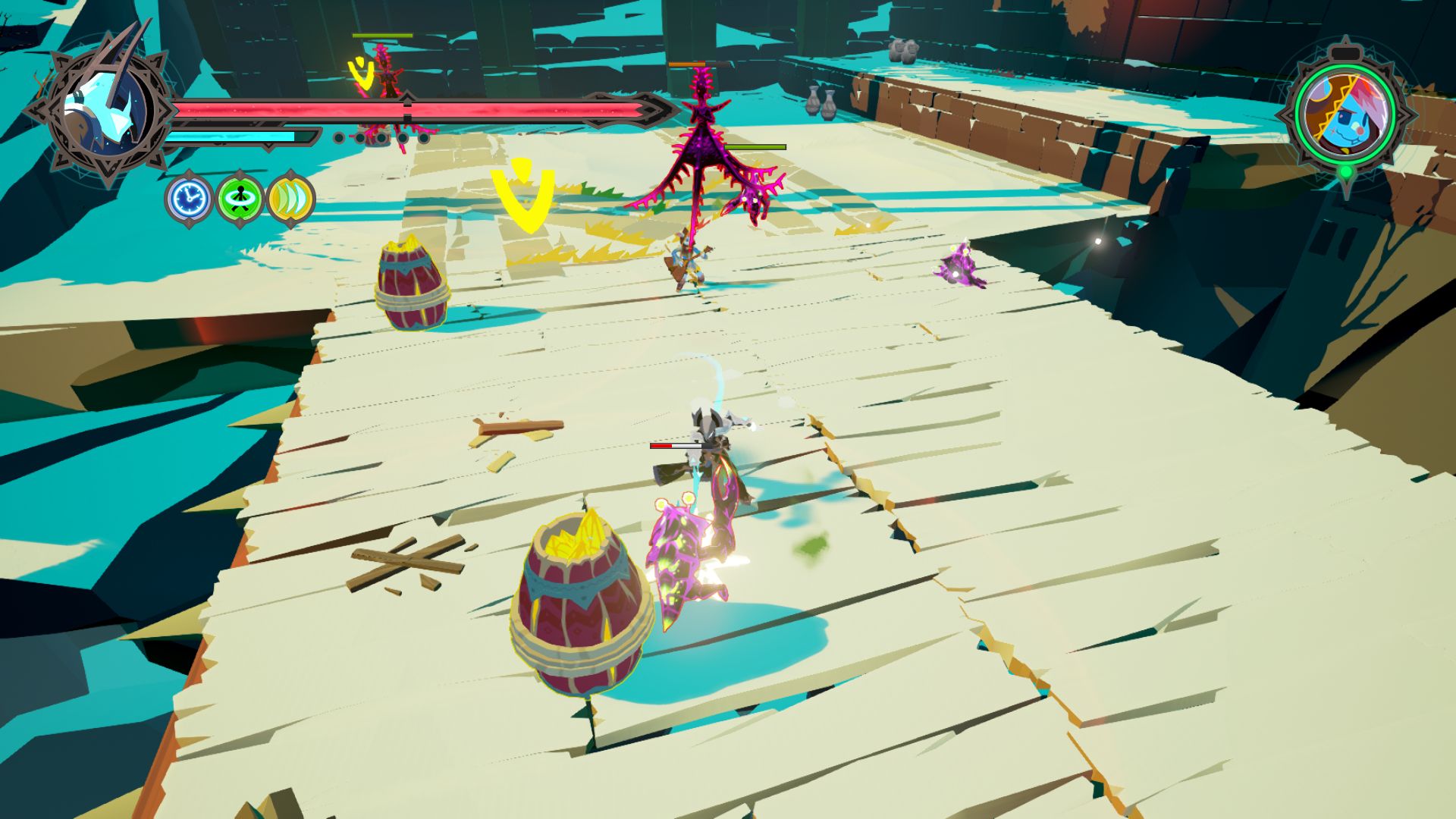 The actual combat in-game also nearly perfect. It’s of the Arkham Asylum mold with insane combos and dodge moves to pull off at the touch of a button when you see an indicator and damned if it isn’t still incredibly fun to whip through a group of half a dozen soldiers with various skills and rack up combos in the double digits. The better you do, the more energy you earn, leading to moments where you can even perform multiple insta-kills with the right tools. It works in tandem with the visuals, creating, fluid, gorgeous animations that just so happen to have you laying the smack down on a horde of mice. It’s also a bit tricky in that you can only heal with fruit found between battles, but the difficulty tends to be in the right area most of the time.

After leaping into the beginning of the chosen character’s final day and bestowing your current titular Omensight upon them, thus providing them with new information you’ve unlocked and causing them to take a new path, the two of you are teamed up as you head along each potential battlefield. The AI is good for the most part (save for a moment where one character got stuck behind) and you can summon their unique skill at the touch of a button. As you continue along your trek, they’ll fill you in with new tidbits concerning themselves or the others, which keeps things lively and fleshes them out. You also have to fight some of the others on certain occasions (or use the Omensight on them again) and the boss battles are nice and well done, even if the final skirmish and all its phases gets annoying in how long it dragged on. 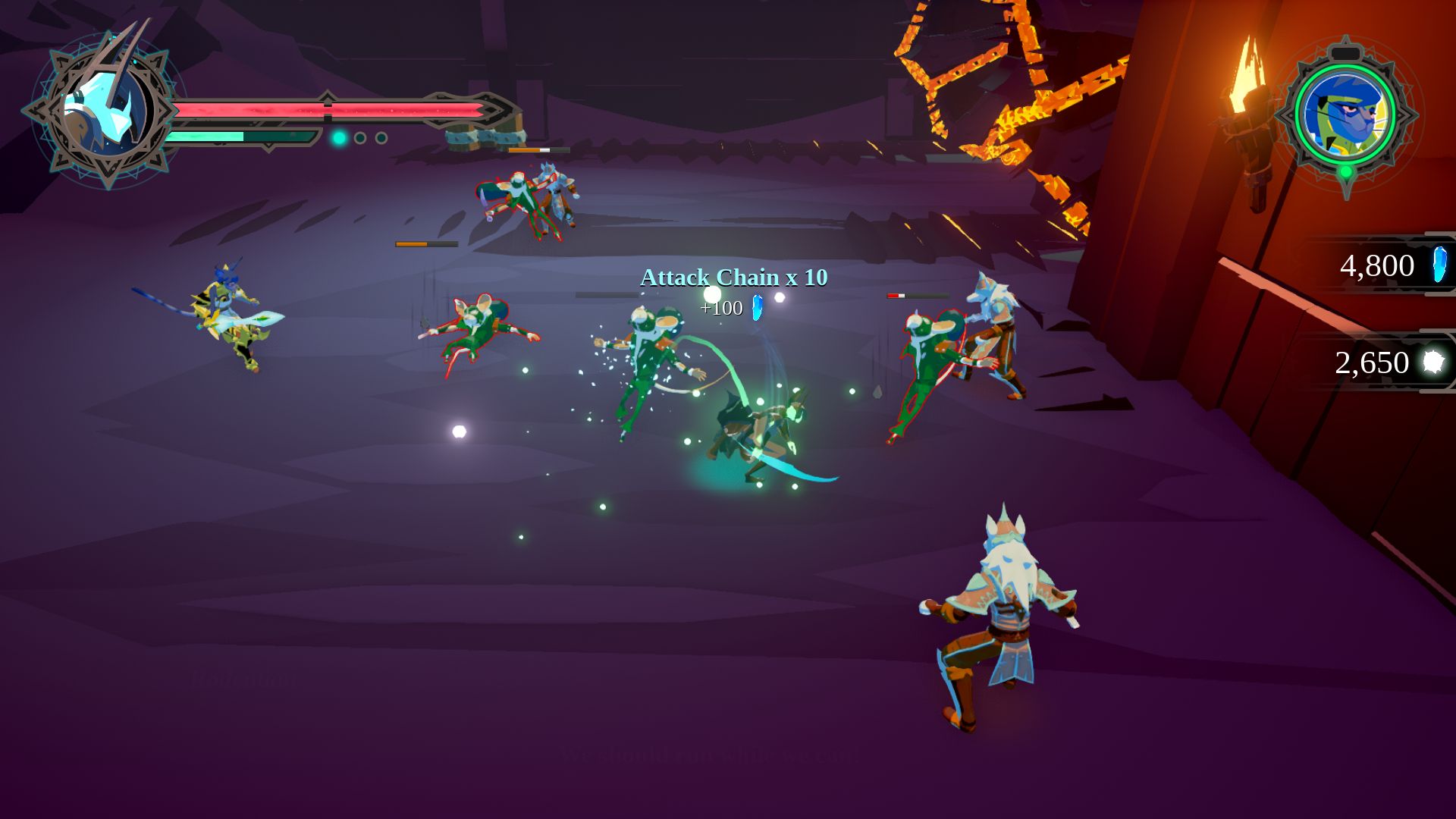 So does Omensight have any notable flaws? Well, there is one notable albatross around its neck in the form of potential repetition. See, because the narrative only requires so much, there are only a total of roughly four main locations in the entire game. Four locations with several different paths to take, seals to unlocks, new areas to visit with new bits of plot, various hidden items…but still only four locations. Sure, The Red Strings Club showed us earlier this year that you can tell an amazing story with several different branches using a minimal amount of backdrops, but that was a graphic adventure game largely based around dialogue. Omensight, in contrast, has a focus on action and you’ll be replaying a few setpieces more than once, even with certain variations. It was never enough to irk me, if only because it was worth playing through some bits for more of the story, but it can potentially be a turn-off for others.

But to be honest, the biggest flaw for me was that you can’t revisit previous chapters after completing them. You would think the part of the investigation means choosing which Omensight to display to a character at the start of each day (or to display none at all) in order to go through all of the outcomes and gather as many clues and information as possible. But no, the second you come across memory that creates a new Omensight, you’re stuck with it as a new chapter begins. And considering that the game teases you with collectibles in the form of various memories for each character that you can only find in different paths, it’s annoying that you can’t go back for them (there’s not even a post-game option for it or anything). True, preventing the end of the world obviously takes precedence, but when I’ve finished my game and still have some missing clues and one notable hole at the beginning of the event timeline, I can’t help but feel disappointed. 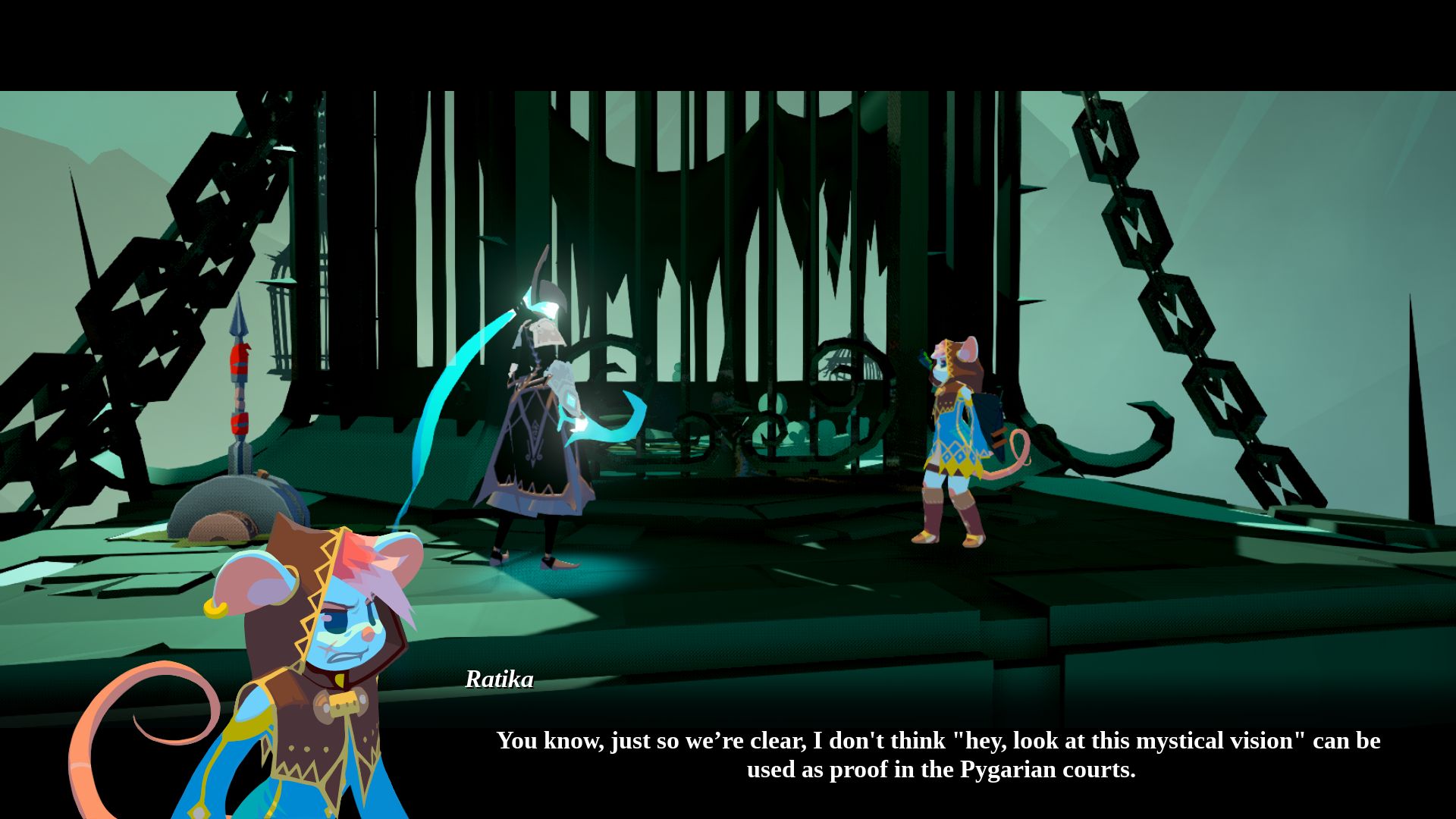 When all is said and done, Omensight ends up being a dazzling piece of work, a terrific action RPG game with fast and fun combat that works perfectly alongside a well-crafted and impressive mystery that’s guaranteed to keep you addicted until you’ve figured everything out. From the eye-popping art to the enjoyable characters with a surprising amount of depth, there’s more than a lot here to love, so it becomes easy to recommend. After all, we’ve seen the path where a title such as this doesn’t exist, and it’s a sad one indeed, so don’t miss out on it.