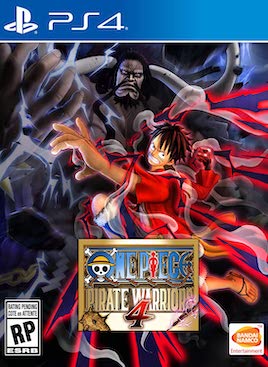 Who will this serve aside from die-hard fans? That’s the common question that gets asked of the type of licensed and established IP-based games. Its equally-common goal may be to satisfy those who’ve stuck with the name/series for as long as they have, but that’s not to say that the positives should stop at their authenticity, their respecting the foundation with which their gameplay revolves around. For those whom are likely to draw a blank at the many names, places and finer references — particularly for something as dedicated and as long-running that things like anime series often get, this example especially — what’s in it for them? What can a title pose other than that obvious disconnect that strangers to a series will likely experience when story arcs, character interactions and the like are meant to fill in the gaps?

It’s a potential issue that, so far at least, One Piece: Pirate Warriors — Omega Force’s implementation of their well-known Musou style — has managed to avoid. An argument for, rather than against, the notion that Dynasty Warriors shouldn’t be the only name wherein this branch of simplified hack-and-slash combat can prove enjoyable. The absence of such a game for nearly five years could then be read as a plus as much as it can be an omen: has the fourth entrant in the sub-series and its long[er] absence been because of genuine effort to replicate what made the third game a surprising joy? Or have Omega Force just been busy as of late? The latter case has some weight to it, but if you’re in need of the type of anime adaptation to video game form, Pirate Warriors hasn’t faltered (or at least not been as universally enticing) in the way a lot of Bandai Namco’s portfolio has sadly felt. One Piece: Pirate Warriors 4, odd it may sound, has a decent loft of expectation to meet then — a task made that touch more difficult given its intention to cram as much of the series’ two decade-old history into a handful of bite-size arcs that both fans and complete outsiders can appreciate.

Though disappointing it may be that the visual and overall technical performance disappoints in parts, it’s pleasing to report that Pirate Warriors 4 just about gets away with things. That’s not to disregard the ample number of low-quality textures, frame-rate drops and consistent camera-work (or lack thereof) that at worst can pull players straight from out that indulgent, over-the-top form of action. But needless to say Pirate Warriors 4‘s gameplay — especially its sprinkling of tactical play too — is addictive. It shouldn’t be understated just how well the game manages to put its visual mishaps to one side, or rather how players will so easily put them to one side. In favor of the kind of Musou experience that makes great use of that sub-genre’s frantic-yet-tactical emphasis on how one progresses. How, as easy it still is to mow through thousands upon thousands of enemies that act even lesser than cannon fodder, Omega Force make sure there’s plenty to think over. 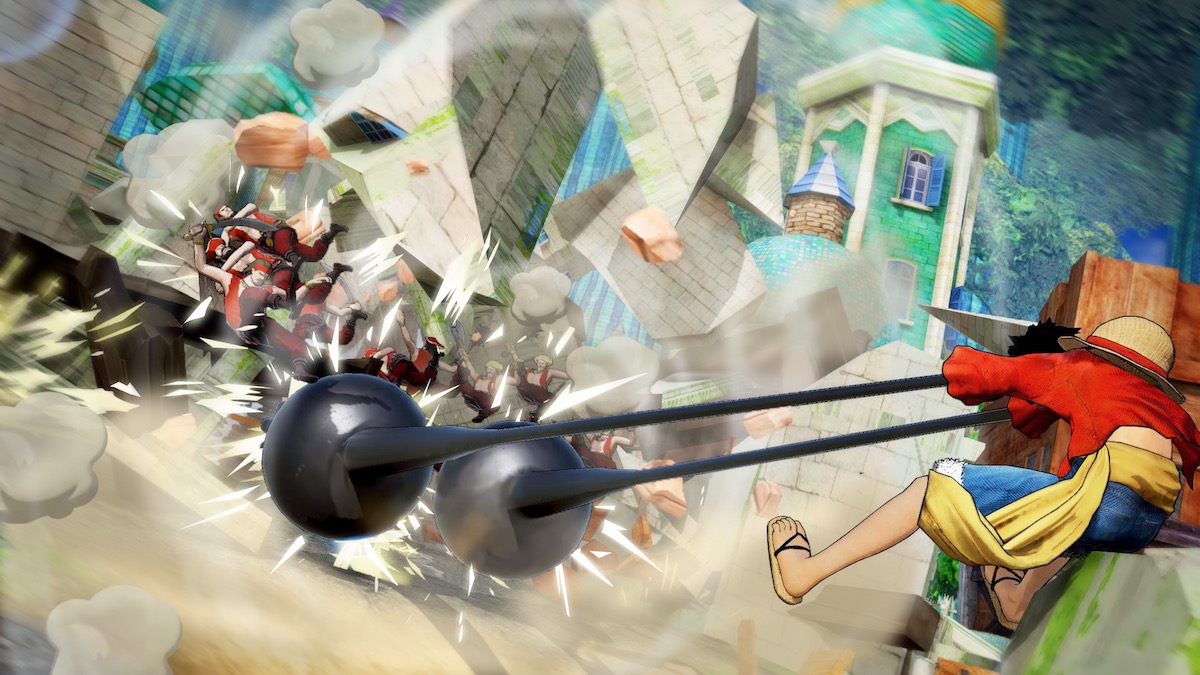 Perhaps the most enjoyable aspect of this comes in the form of the game’s character roster; more than forty in total and while the story mode limits this number significantly, there’s still enough variety in move-set and special abilities for players to involve themselves with combat. How main protagonist Luffy differs from his fellow Strawhat Pirate companions; how Zoro and Sanji right from the off differ in speed, range, as well as when best to apply their own abilities. How the larger, more towering characters playable in later story arcs factor into things as well. Not all characters adapt to the Musou formula however and it does eventually work against the experience when players are forced into missions/scenarios that require you controlling them for specific chapters. While the difficulty does remain relatively easy and manageable even in such less-appealing moments — only really testing players when specifically-named bosses or sub-bosses show up in particular chapters — Pirate Warriors 4 does still invite variety and experimentation with how genuinely fun it is to wreak havoc. Trying one’s best to juggle hundreds of cannon fodder enemies mid-air (while keeping one’s self from touching the ground). Being able to stun-lock even the more notable bosses to maintain a similarly wild and borderline-chaotic flair. Simple and a little repetitive it may get, the amount of objectives offered on top of how liberal the game is with on time mitigates any turn towards the gameplay feeling like a chore.

As noted, the camera-work doesn’t do the best job at keeping up with everything on-screen and it’s shame that such a crucial element puts a dampener on things. There are numerous times when a player’s perspective can get caught in-between buildings or how characters can wildly move off-screen, requiring a constant reconfiguration of both camera and lock-on alike. But push past these annoyances, unfortunately frequent they may be, and there’s seldom a moment where the game doesn’t offer the liberty to go nuts. What’s more, as basic the button-mashing essentials to combat are, the special abilities you can activate upon their associated meters filling in is where the true variety and possibilities open up mid-battle. On top of an accompanying dash ability for all characters — an essential tool when it comes to chipping away at major characters’ armor — that implied simplicity with its gameplay is fortunately added to with a sufficient amount of move-sets and differences between characters to explore. 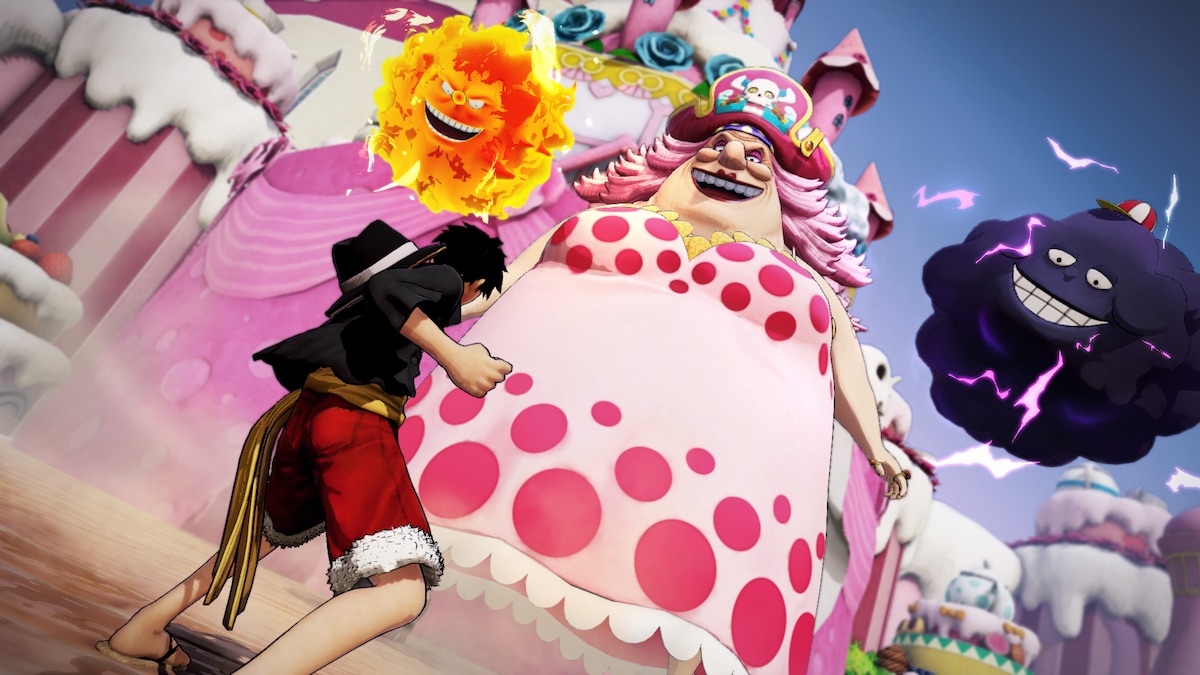 The other surprising yet welcome aspect to the game is the lack of any real grind or feeling that the game is painfully dragging you through the mandatory leveling and progression system. Despite there being so many characters’ meters to fill and unlockables to tick off, Pirate Warriors 4 benefits from providing players a decent amount of currency (of which there are several types) to invest in a fair few areas prior to each mission. What’s more, because there are two different types of skill tree so to speak — one character-specific and a more general screen with which all characters benefit from — the amount of options on offer doesn’t feel like content for the pure sake of it. Buffs to attributes like strength and stamina, as potentially vital as learning longer-lasting move-sets and increased skill slots. You could arguably get away with blindly picking what to invest in, but it’s no detriment to a game that thankfully rewards its players with sufficient resources. Rewarding additional items upon completing optional side-quests, and as you might expect, beating as many enemies on-screen as one so desires.

So what about the story? What of the material die-hard fans may be interested in? Well, despite the fourth entrant in this series covering more ground and the series’ more recent arcs, the game still makes sure to condense proceedings — focusing only on the major story beats while recapping additional detail. It’s a shame then that Omega Force still try and cut corners when it comes to the presentation side — certain characters relegated to mere profile pictures, implying conversations are happening just off-screen. Or as mentioned, the technical side from evident aliasing to less-pleasant textures crop up on a frequent basis. It’s a genuine shame because on gameplay alone, this is the kind of [average] 12 to 15-hour campaign, if not overly-deep or challenging, where even a lack of complex mechanics are addictive and enticing enough that it ends up pleasing both crowds. Both the fans of this series and those who aren’t. 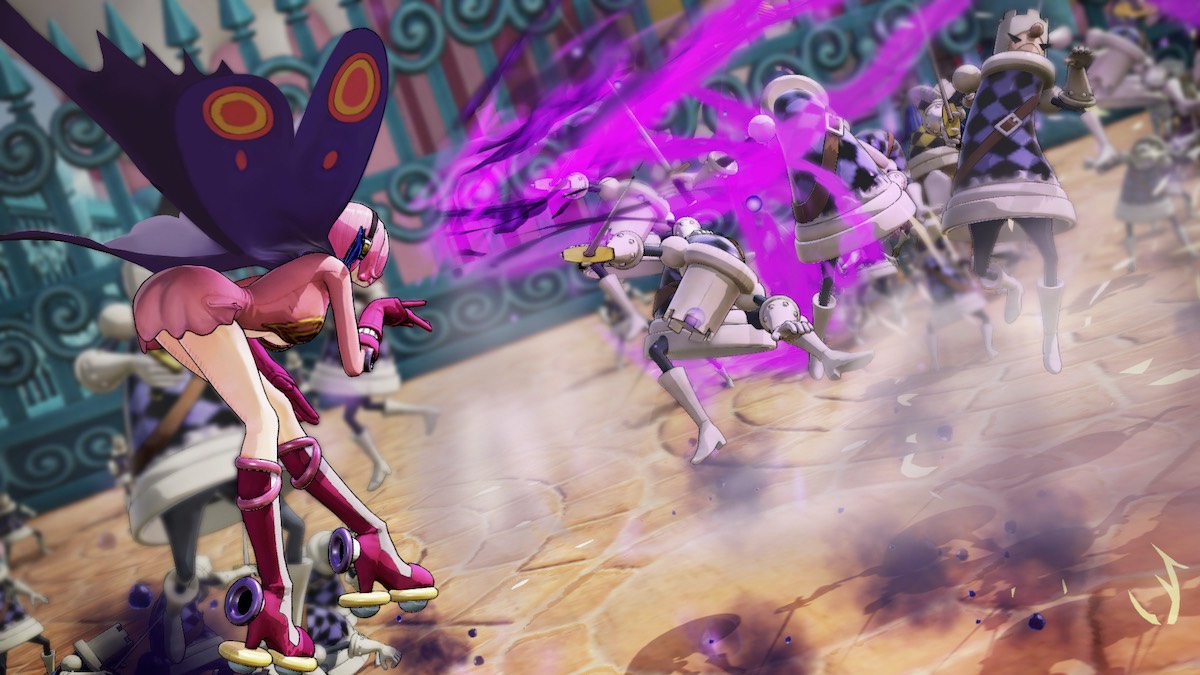 A let down it is that Omega Force couldn’t dedicate as much time to the visuals as they have done the source material, One Piece: Pirate Warriors 4 is still the kind of game — the kind of Musou too — that seemingly does the unthinkable in providing a ludicrous-yet-fulfilling action game regardless of its depth. While it’s a shame that the game’s console iteration does result in the less-appealing visuals coming to the forefront too many times, alongside some flawed camera-work and frame-rate performance, the game does just enough to ride out its failings. And with a vast amount of upgrades and a general feeling of rewarding players for their continued commitment, the game is equally clever in not taking advantage of the time players will no doubt invest. It may ultimately result in an iteration that doesn’t claim superiority over its previous forms, but even for those with virtually no care (neither prior nor ever) for the One Piece narrative, the delightful indulgence in the ridiculous is an attractive-enough proposal. One Piece: Pirate Warriors 4 in the end is another solid argument for, rather than against, the Warriors template of hack-and-slash being lent out to other brands.