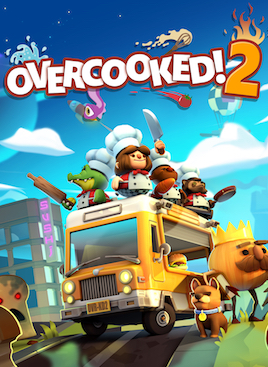 There are few games out there, AAA or niche alike, that integrate co-operative gameplay in a meaningful fashion. For the most part, co-op is often used as an excuse to shoehorn anywhere up to eight players onto screen or at least the influence of live play. A hollow extension of mere single-player mechanics wherein co-op simply replicates this aspect and nothing more. Exceptions do fortunately exist; within the independent community particularly, “couch co-op” has seen a fair amount of resurgence over the past few years.

2016’s Overcooked, by developers Ghost Town Games, was one of these such games that not only celebrated pre-online multiplayer, but reinforced the idea of teamwork and genuine communication between players. That one wrong move, or simply a lack of following through on a sound strategy, could spell disaster for not just your own personal success, but the victory of your entire team. Despite the taken liberties spun about its predominantly kitchen-based premise, basing this generally around the stress of restaurants of varying culinary types — orders flying in at every turn regardless of theme or setting — it proved a fitting match. On the surface, the 2018 sequel that is Overcooked 2 is essentially more of that same prying desperation for order among the hectic chaos that is a busy restaurant.

The bright, colorful aesthetic and cartoony presentation is back to facilitate the silliness on display, as are the surreal ways Ghost Town attempt to throw many a spanner in the works to trip their players up. Conveyor belts, bustling pedestrians and even splitting the work area into many pieces are just a few of the dilemmas players must find a solution around, one way or another. Some levels literally transitioning from one form to another — the developer trying their best to distract players in an ironic fashion. While the core gameplay remains unchanged, these novel gimmicks keep Overcooked 2’s array of multiplayer-themed levels within its main story mode from feeling tired. 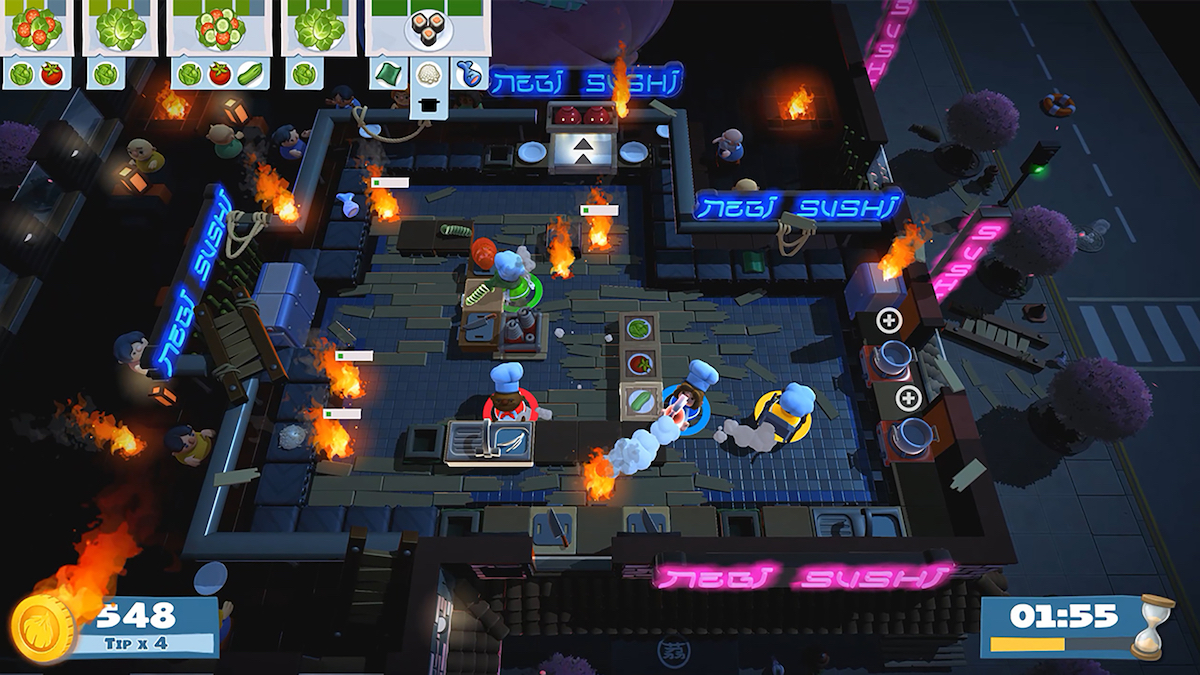 Even if the challenge — or rather the peril of buckling under the growing stress — of racking up a high enough score serves as better enticement than simply seeing what ounce of jest or annoyance Ghost Town mean to cook up out of shot. It’s a shame then that once again Ghost Town refuse to adapt the story mode to those who simply want to go it alone; netting anything more than a solitary star come timer’s end beyond the second “world” proving impossible due to how much one is required to keep track of, keep tabs on or simply sprint back and forth between. Particularly when later levels are intentionally designed so that one player may be temporarily blocked for large periods. Obvious a statement it may be, co-op is the way to go if you intend to get the highest score per level but are also desiring to get the most out of what Overcooked 2 has to offer. Fortunately this is where the Mario Party-esque tarnishing of friendships blossoms into something both aggravating but delightful in equal parts.

Such is the effectiveness of Overcooked’s emergent gameplay — from forgetting to take a boiled pot of rice off the cooker (perhaps even setting light to and inevitably ruining your ingredients), to not washing up used plates so that future dishes can be served on them. Little (if any) of these small bursts of child-like error are inherently new in the sequel of course, but Overcooked 2 is still effective in making its formulaic procedures — and how this all feeds back into the cycle of constant co-operation — seem relevant without detracting from the need to get as high a score as possible. Working out which utensils are closer and/or when the level might shift to another phase or state are but part of the due process and at its best, Overcooked 2’s orderly chaos is one that, if ignored, can have players go from plain-sailing to outright disaster and back again all in the space of a few minutes. Mentally it can become a strain to recall what goes where — all the while external elements hop in and out of the surroundings to further complicate matters — but that’s all part of the charm and a reason why its co-operative philosophy makes sense. 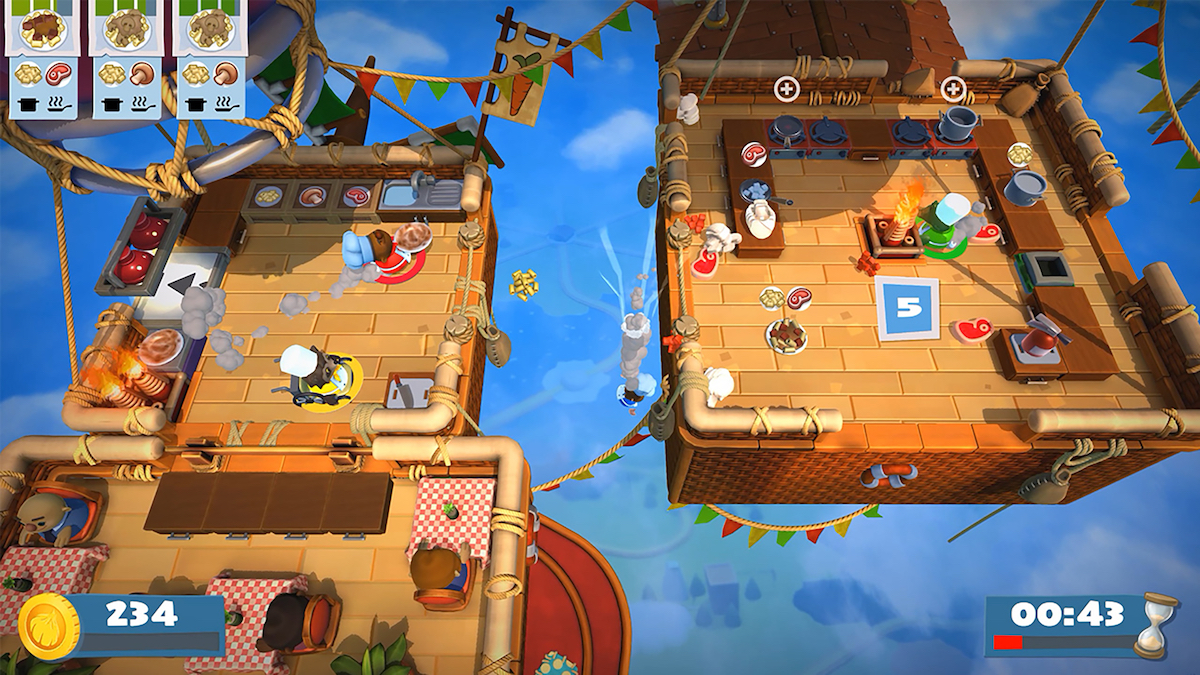 But outside of the levels themselves, there’s nothing else for the player to engage with in such an active fashion other than to merely drive one’s animated vehicle from one level to the next. The rather simplistic overworld that comes stapled to the story mode does come off as a little tacked on in the long-term. Having to return to the main castle upon completing a set number of levels in order to unlock the next set feels mundane while having to sniff out switches to raise certain ramps just seems utterly pointless. Playing this on the Switch, offline — or rather in local multiplayer mode that is — it’s unfortunate (and not without some clear signs sadly) for the game to dip below even 30FPS and even see the restraint of the set resolution creep up on-screen while in TV mode.

But it’s online where Overcooked 2’s woes, much like its predecessor when it too was ported onto Nintendo’s console, let themselves be known. Be it arcade, where up to four players compete as one team to rack up a high score or in competitive mode which has two teams of red and blue competing on opposing sides of a level/kitchen. Put simply: online is a borderline-mess. Not entirely broken or wholly damaging, but clearly one in need of some considerable stability. Frame-rate stutters, obvious lag between movement, button prompts not correctly being recognized, controls themselves stifled to the point you can often overshoot or even undershoot a targeted region of a table. There’s plenty of chaos to see and partake in still and while you’re free to attempt muscling your way through the networking issues, for a game that primarily — if the continued ignoring of single-player is any indication — relies, but flourishes it has to be noted, on the success of working together, Overcooked 2‘s persistent woes are hard to ignore. 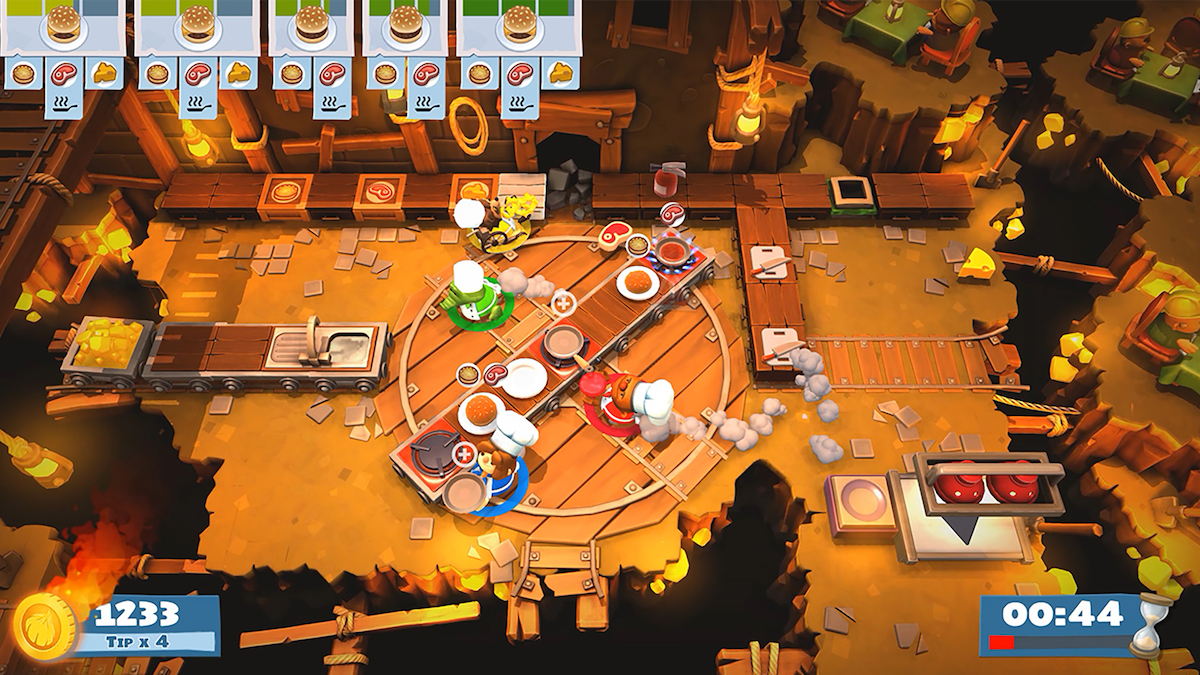 It’s obvious how much rage-tinted joy can be conjured from out Ghost Town Games’ quirky set-up of cooking up meals, together with a sprinkling of simulation-style managing of one’s kitchen workspace. And when it comes to reinforcing the communicative and reactive side to co-operative play, Overcooked 2 is — like its predecessor — a welcome reminder that co-op can instill depth in its mechanics. Unfortunately, the continued issues with online play (least on Nintendo’s platform) as well as Ghost Town’s wilful dismissing of a properly-adapted single-player alternative will only go to dwindle the potential audience once more. An audience whom might not see much significant change from what is still essentially an unaltered recipe from previous, but will still find immense joy in partaking in when part of a group. Which is a shame, given how well-realized Overcooked 2‘s core, emergent style of play truly is.