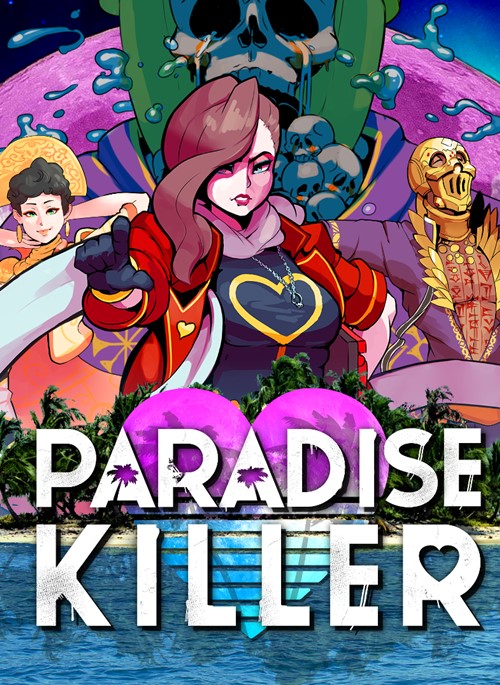 When first laying eyes on Paradise Killer, it might seem like an indie Danganronpa or Phoenix Wright. While this first impression isn’t entirely wrong, it vastly underestimates what this title brings to the table. In actuality, it’s inspired by the obscure PS2 era game Flower, Sun and Rain and modern vaporwave aesthetics. The game takes place on Paradise Island, an island that regularly destroys and restarts itself in pursuit of perfection. Players assume the role of Lady Love Dies — an immortal investigator who had been thrown into exile for the rest of her unending days. A crime so massive has just occurred, however, that requires Lady Love Dies to be brought back and seek out the truth. The crime in question is that many high-ranking officials were killed off in a terribly gory scene. There’s an apparent suspect, but the facts seem too convenient for them to really be the killer.

Players are given an extreme amount of freedom to explore the crime and come to their own conclusions. Gameplay itself is very much unlike other investigation-trial video games out there. There are no chapters or an attempt to lock progression until players uncover every clue. Paradise Killer is an open world game in the truest sense of the word. The entire island is open for exploration. There are some locked doors, but it’s not required to unlock them all in order to finish the game. Throughout the world you’ll meet up with other characters, uncover clues (and new crimes) as well as collect currency known as Blood Crystals. Much of the currency is hidden in unexpected areas and requires players to do a bit of platforming to get to them. Although not required, uncovering lots of Blood Crystals will yield access to buy information or hacking tools to improve your laptop.

With such a huge island, it could easily become too annoying to interact with other characters. Fortunately there are multiple remedies to this issue. For one, Lady Love Dies can view a special display pointing to where each character is on the map — and if they have new information to discuss or not. That simple tweak is something other games should incorporate. There’s also a fast travel option, though it requires a Blood Crystal per use. Anyone who fails to explore the island to its fullest may find themselves running out of currency rather quickly. There’s a colorful cast of characters with creative designs that you’ll want to get to know. Once you get past their designs, the character’s aren’t actually all that wild. In fact, they seem more down to earth than anyone in Danganronpa. 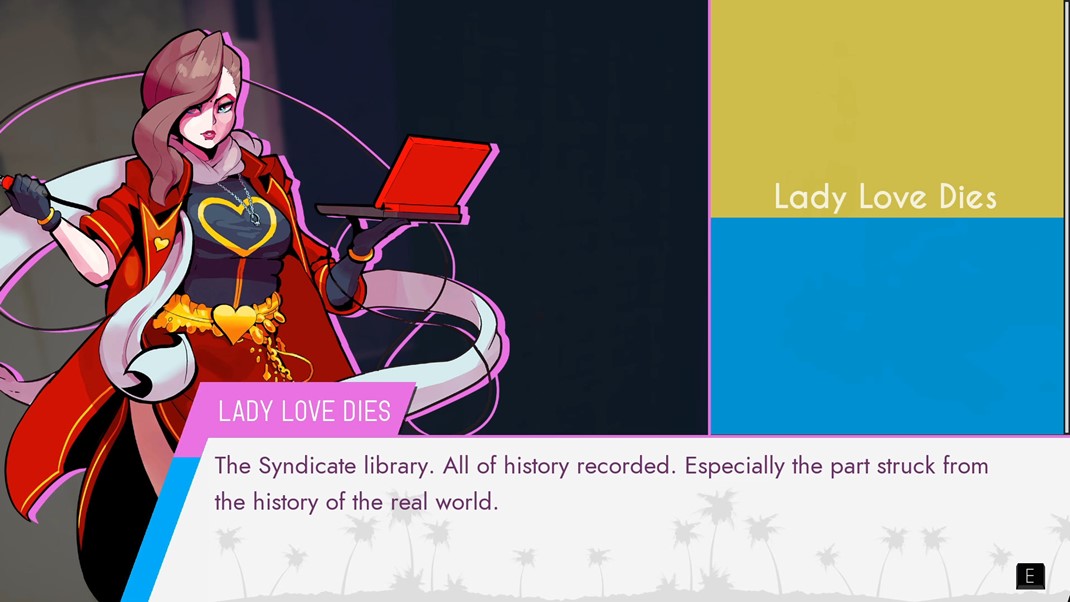 Talking with the different residents of Paradise Island is tremendously important. Speaking with them helps uncover people’s alibis as well as break the alibis of others. It also provides more information about their relationships with each other and why some might have motives for murder. It’s fun to get to know the characters, as befriending them may yield additional information. The only downside is that with all the text you’ll be reading, there’s no way to increase the font size or change its coloration so it stands out more. There’s no full voice acting in the game; instead the characters will let out little quips in English from time to time.

The unique cast is just one part of the equation in Paradise Killer, because much of your time will be spent simply exploring the island. There are clues scattered all over the place and often they’re hidden. There’s little progression gating, aside from needing to spend Blood Crystals a few times to unlock a few areas. This can be done at any time, not only after finding X and Y clues like might be the case in other games. Exploring can become droll if you don’t know what you’re looking for. Fortunately the game keeps a hefty log of potential leads to follow up with, helping point players in the right direction. It also helps that the game has an utterly gorgeous 80s/vaporwave aesthetic. The world is so familiar, yet so strange and intriguing to explore. 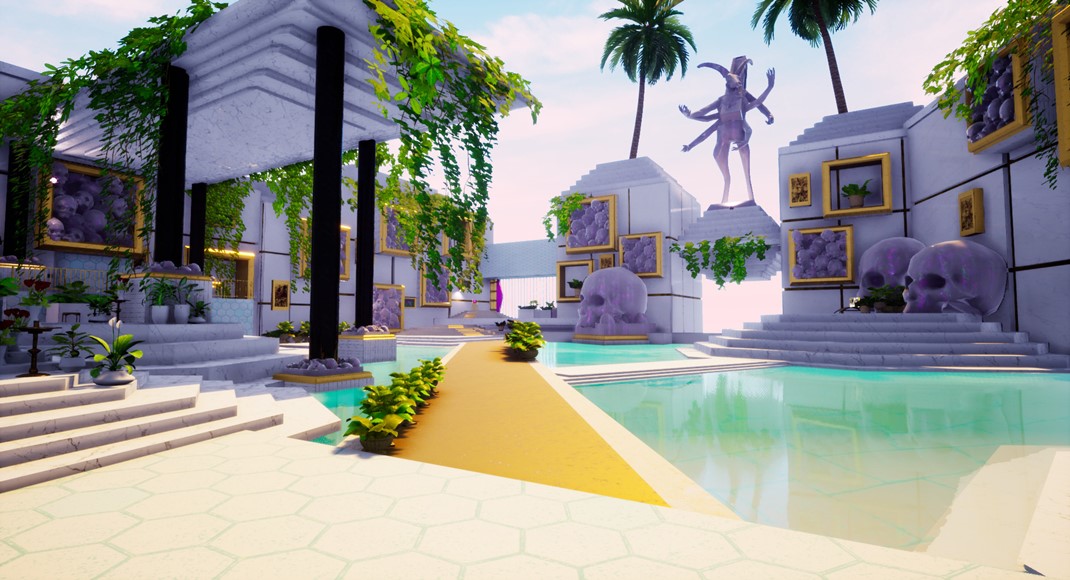 You’ll get lost on the island and sometimes that’s not for the best. Sure, you may want to visit a certain location but won’t have that place committed to memory. Either way, it’ll likely require figuring out where that is on a map to determine where to fast travel to. At times, the world of Paradise Island also feels distressingly lonely. Although there are a good number of characters, there are hardly enough to fully dot the landscape. Many times the player will be completely alone as they scrounge through bushes and around the backs of buildings in hopes of finding anything. Sometimes you’ll be rewarded — and other times you’ll get nothing for your efforts.

The oddest thing about Paradise Killer is that there’s never a point at which the game tells you that you’re ready to proceed to trial. It’s up to the player to decide they’re ready and to begin. Technically, you could start the trial at the beginning of the game, it just would go poorly. It’s a shame that after all this open-endedness the actual trial is extremely restrictive. You get to choose who to accuse for crimes, but presenting evidence requires no thought like it does in Phoenix Wright. Either you have enough evidence to convict someone or you don’t and the game basically plays itself by unveiling the evidence in the right order. It feels rushed and is a huge shame given how this element is nothing like the rest of the game. 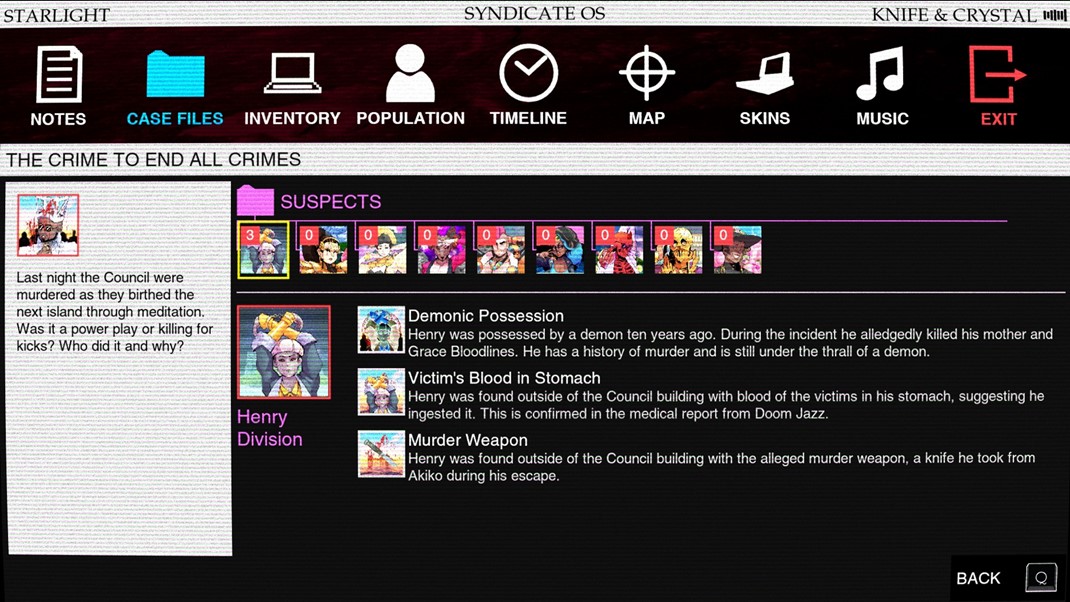 There’s a lot to love with Paradise Killer. From the cool cast of characters, to the open-ended nature of the investigation, players will find it easy to dive in. The vaporwave visual design may not be to everyone’s tastes, but those who enjoy it will love the world on display. The biggest disappointments are that there’s not more to the world exploration aspect. It’s also a shame that the open world nature of the gameplay does not carry over into the anticlimactic trials. Even so, it’s worth taking a vacation on Paradise Island. Paradise Killer is a bold first release from Kaizen Game Works and we’re looking forward to see what they create next.