Paranautical Activity didn’t have an easy birth, and its life is off to a rocky start as well, but behind all the drama is an FPS that deserves a look.  It’s a semi-randomized run through eight levels of a ship infested with monsters, rendered in a blocky voxel style accompanied by a killer soundtrack to keep the action moving.  There’s no explanation as to why you’re in the ship/dungeon, but seeing as you’ve got a gun and there’s monsters on board you might as well apply the former to the latter and see where that gets you.

At the game’s start you’ve got a selection of four characters with different guns and stats, and paying attention to the achievement goals unlocks two more with a bit of play.  Each character suits a different play style, with weapons ranging from a melee scythe to a bomb launcher, flak gun, and other, more normal guns.  The speed and health stats are defined by character, while damage and fire rate go with the gun.  Some characters come with a secondary weapon while others need to find one along the way, and everyone starts with a different amount of grenades available as well.  Everything is going to get mutated during a run, however, because every boss and sub-boss encounter rewards an item with a permanent stat-changing effect for that game.  Survival in Paranautical Activity is as much about learning which powerups to collect or ignore as it is about mowing down rooms filled with creatures. 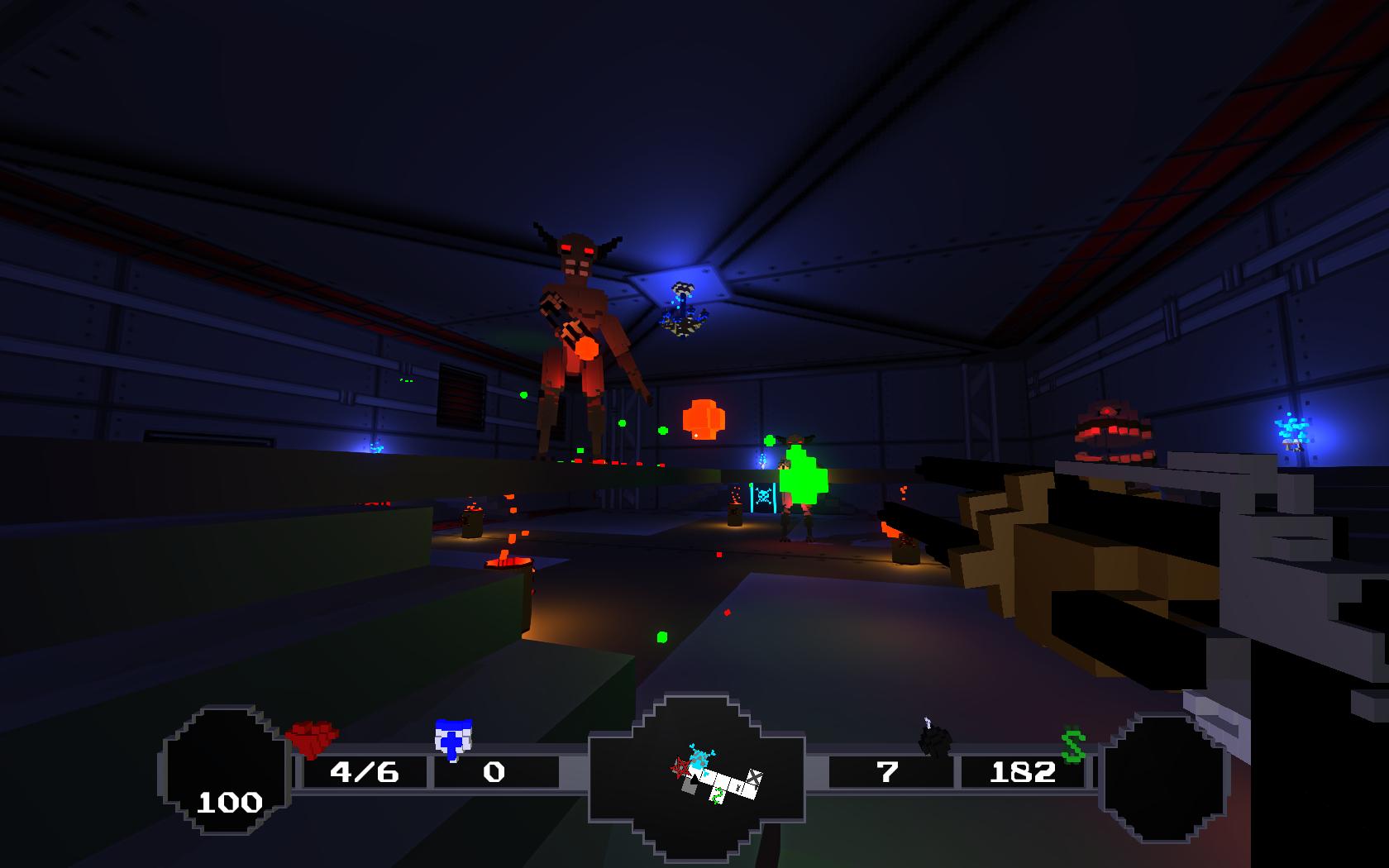 Each room is a square, usually the same height but there are a few that play with verticality.  Level design isn’t Paranautical Activity‘s biggest strength, but for the most part the rooms do their job of holding monsters for you to shoot and dodge.  It’s frustrating trying to move and realizing the stairs you’re trying to pass under are just short enough to block passage, allowing a land shark to get in a couple good bites on your dwindling health counter, but there aren’t so many room types that you can’t learn which ones are trouble and adapt.  Each level is built of a number of rooms laid out randomly, and when you enter the doors shut until all monsters are cleared out.  You learn pretty quickly that charging straight into the next room is a bad idea, because while the monsters don’t spawn until the doors close, you’ll at least be able to plan the attack in advance.  The monster spawning layout is a bit more diverse than the room selection, but a few run-throughs will tell you that this area will have a bunch of the little wizard-guys who shoot slowly roaming about, while another will have a couple devils rapid-firing away from the corners.

As each floor is cleared the monster mix deepens, adding ninjas who disappear and charge in a trail of green sparks, moths shooting dangerous homing bullets, floating skulls that fly straight at you to bite away your health, flying turtles firing rockets, and several more deadly critters.  Paranautical Activity doesn’t have a huge bestiary but it’s an effective one, and the bosses do a good job of diversifying the encounters.  Each floor has a main boss by the elevator and a secondary one in a random room, helpfully marked on the door so you won’t be taken by surprise, and you’ll never now who you’ll be fighting until the encounter starts. 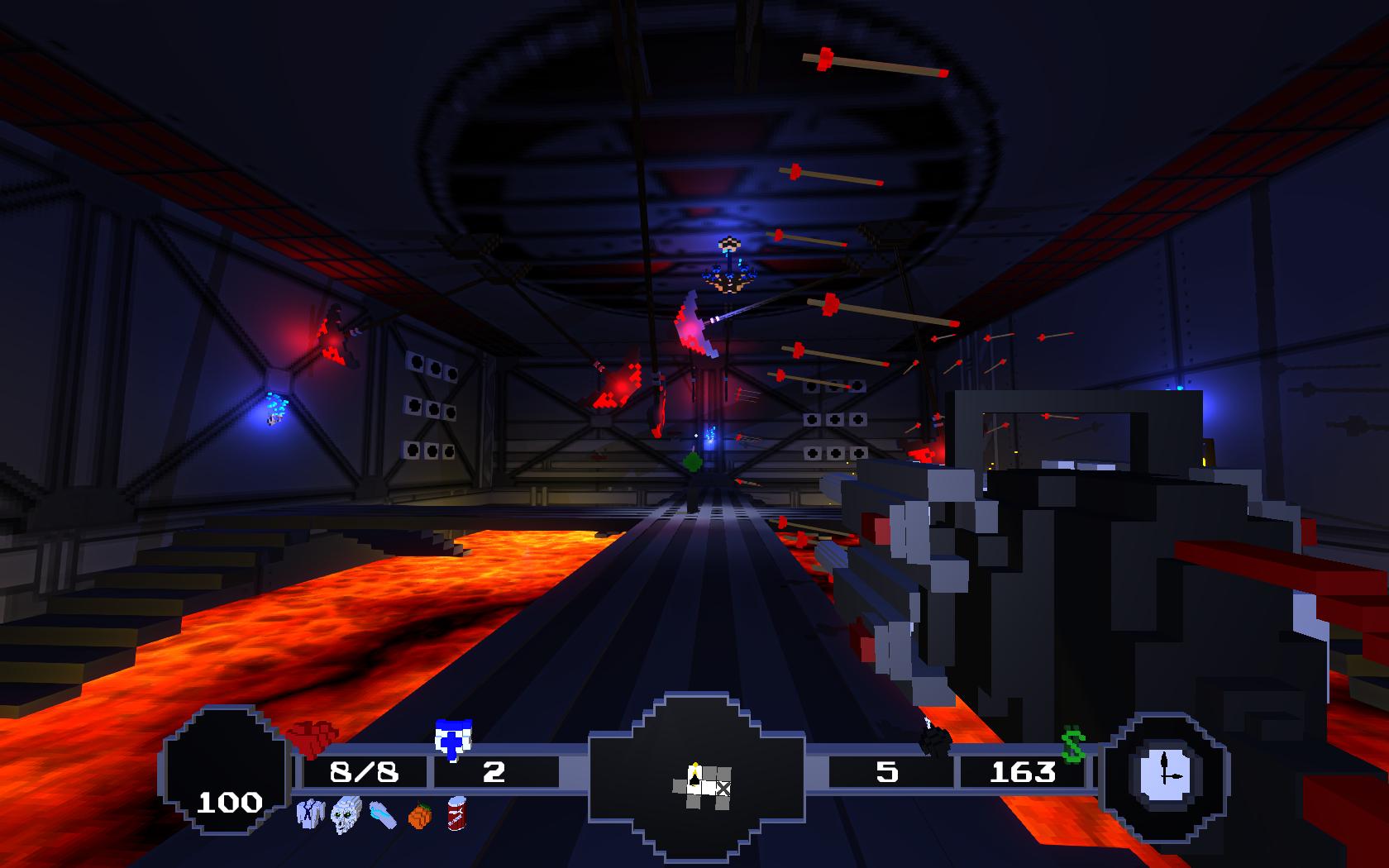 As you fight past bosses and start clearing floors, you also earn powerups that change everything.  More health at the expense of speed, sticky bombs, faster movement on the ground, double jump, the game-changing VVVVVV ability that switches jump to flipping the room upside-down so you walk on the ceiling, or even weird semi-useless skills like glowing or gender-changing.  As you shoot enemies they drop money that can be spent at each floor’s gift shop, and if you can save enough you can buy even more powerups.  In one particularly good run I had a character with a grenade launcher that shot floating bombs with enhanced explosive damage that also stuck to enemies, plusa blast shield for immunity to explosive damage.  It was glorious for as long as it lasted, but the fifth floor is where things start getting properly out of hand and cut that run short.

Paranautical Activity is a hard game, even the strongest character only starts with nine health, and fighting down the floors is a war of attrition.  Enemies are generous with the money drops but much stingier with health and shields, so while with experience death on the first floor is rare, it’s not completely unheard of.  All it takes is the wrong powerup and the right enemies to see a good run go bad, but them’s the breaks.  Next run will be better, or at least different, and with a bit of luck it might even be easier for a short while until the properly deadly enemies show up.  Reload, try again, repeat as necessary.  The hallmark of a good semi-roguelike FPS is how replayable it ends up being, and one run of Paranautical Activity turns into another almost before you realize you’ve restarted. 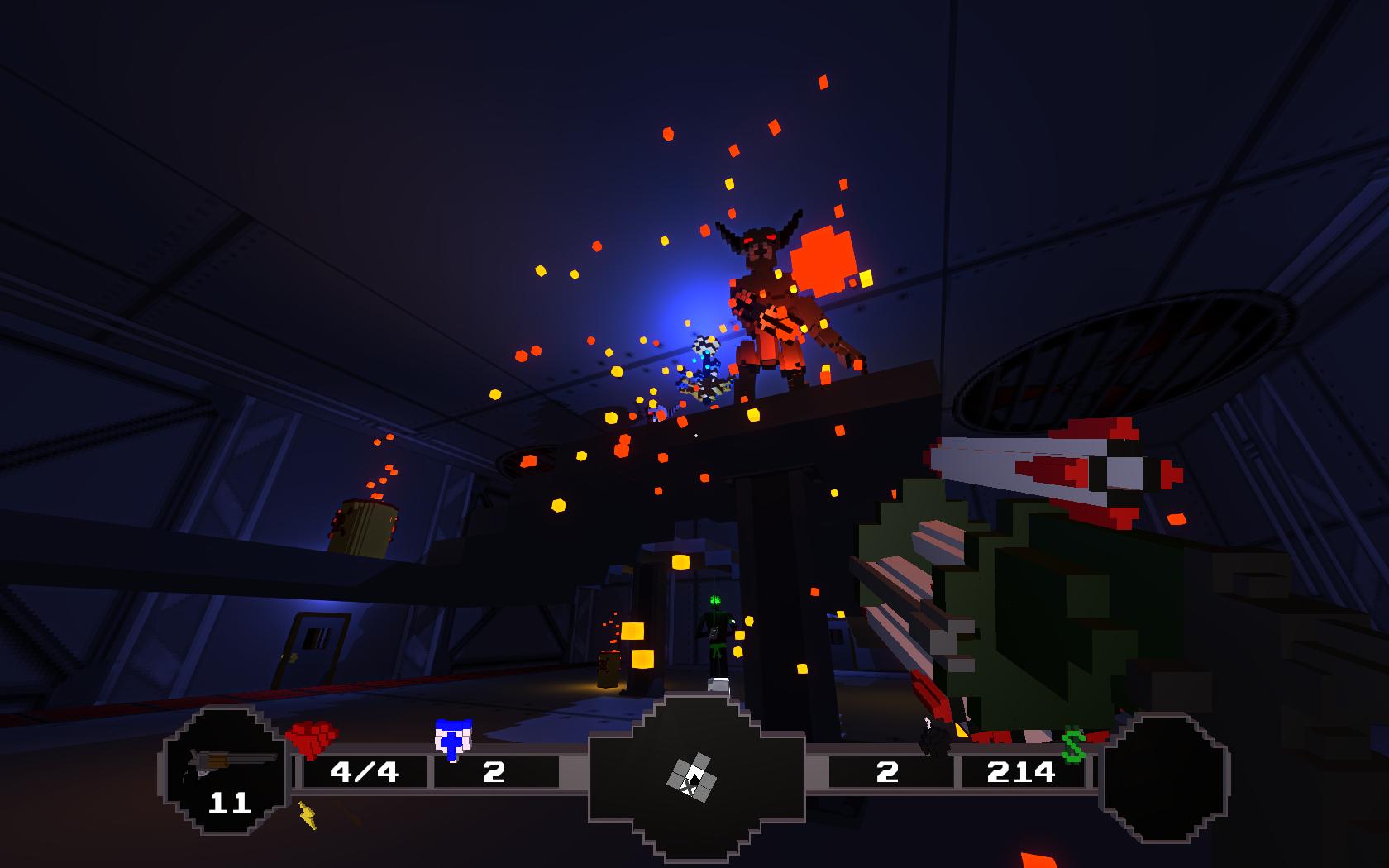 Paranautical Activity may not be a great game but it is a very playable, very fun one.  It takes a bit to get used to, thanks to a drab gunmetal-grey level palette and characters that initially feel underpowered, but everything comes together nicely once you adapt to the play style.  Each run is a new experience, and adapting play style on the fly to take advantage of the items found along the way makes the semi-frequent room repetition easily tolerable.  Learning to use all the tools the game has available to survive and grow will take a lot of experience with its systems, but the high replayability makes that easy enough to acquire.  Paranautical Activity is a good, solid arcade FPS that demands adaptability as much as fast reflexes, and if you can manage both of them then just maybe you’ll get to the mysterious eighth floor.  If not, then it’s far too easy to try just one more time.