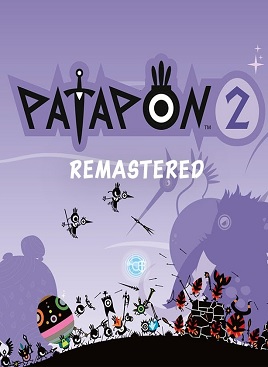 Starting off personally, it’s been years since I’ve enjoyed the world of Japan Studio’s Patapon. The PSP series was one that helped define the platform. The simple, rhythm-based inputs to command the troops made it easy to jump out and back in using the system’s sleep features, but there was always plenty of depth to make return visits worth it. Despite having the affinity for the series, the fact that the original was remastered for the PlayStation 4 somehow slipped under my radar. So, when the boss announced the review opportunity for Patapon 2 Remastered with the side comment of “PataPataPata Pon,” I knew I had to move on it. Those that immediately realized that the previous sentence was an lame joke have nothing to worry about; the game has not been changed in the remastering process, courtesy of Pyramid. This is both a blessing and a curse.

After the events in the previous game, Patapon 2 opens with the erstwhile Patapon tribe making their way to their ultimate goal, Earthend. Because the player character, a god named Kami, is a fickle and less than powerful deity, the PataShip is sunk, standing the little eyeball creatures on a new island. Soon they learn that the Patapons have been on this land before and they become embroiled in a plot of cosmic and demonic horror.

To hear that the game is filled with demon gates and spider monsters, with some not-so-subtle symbolism that’ll fly over the kiddies’ heads, one might wonder about the tone of the game. Despite the themes, it’s utterly adorable. From the infectious song on the title screen, to the tribe’s little angry faces when they go in for the attack, it’s hard not to fall in love with the little guys. The art style does seem minimalist on its face, but there are tons of subtle textures and color choices that show real effort and thought put into the visual design. This comes through more with the move to 4K, allowing the player to see some of the little details that would have been missed on the PSP’s smaller screen. That’s why it’s extra disappointing that they didn’t put in the work to add HDR support for this version. Since that feature tends to add more to a game’s appearance, and the style here is practically screaming for it, it feels like a glaring omission in the quest to create the definitive version of Patapon 2. 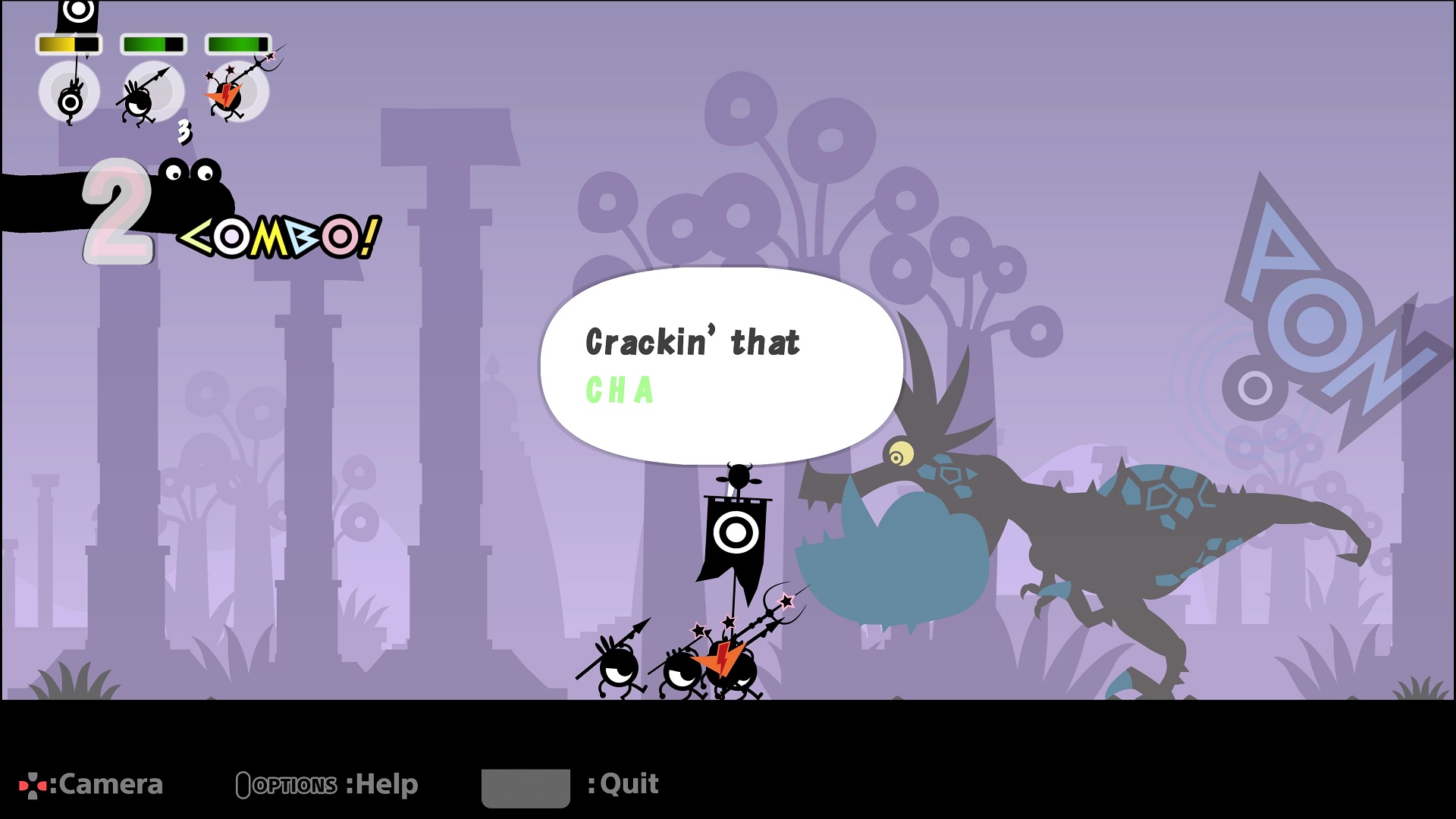 When getting into the game proper, one finds it does hold up at the base level. Using 4/4 time, the player inputs commands to the rhythm of the background beat. Move forward, attack and defensive positions are learned early on, with a fall back option, weather-changing Jujus, and more entering the fray as the game goes on. Long lapsed players will want to take the time to reacquaint themselves, as it is possible to forget the right drums beats over the years.

This simplicity was a strength for a portable system and it still works here. The problem is that it can become grating for other people in the room. The constant chanting and cheers did not set well with this reviewer’s wife. It’s not the end of the world, though, as the game was intended to be played with headphones on. This is especially true because of the rhythm requirement. TV speakers just don’t cut it for hearing the ticks and the on-screen flashes seemed a hair off. It would have been a cool and useful feature to make use of the DualShock 4’s rumble function to keep the beat, similar to Q Entertainment’s Rez or Lumines on the consoles. Unfortunately, that’s not here. 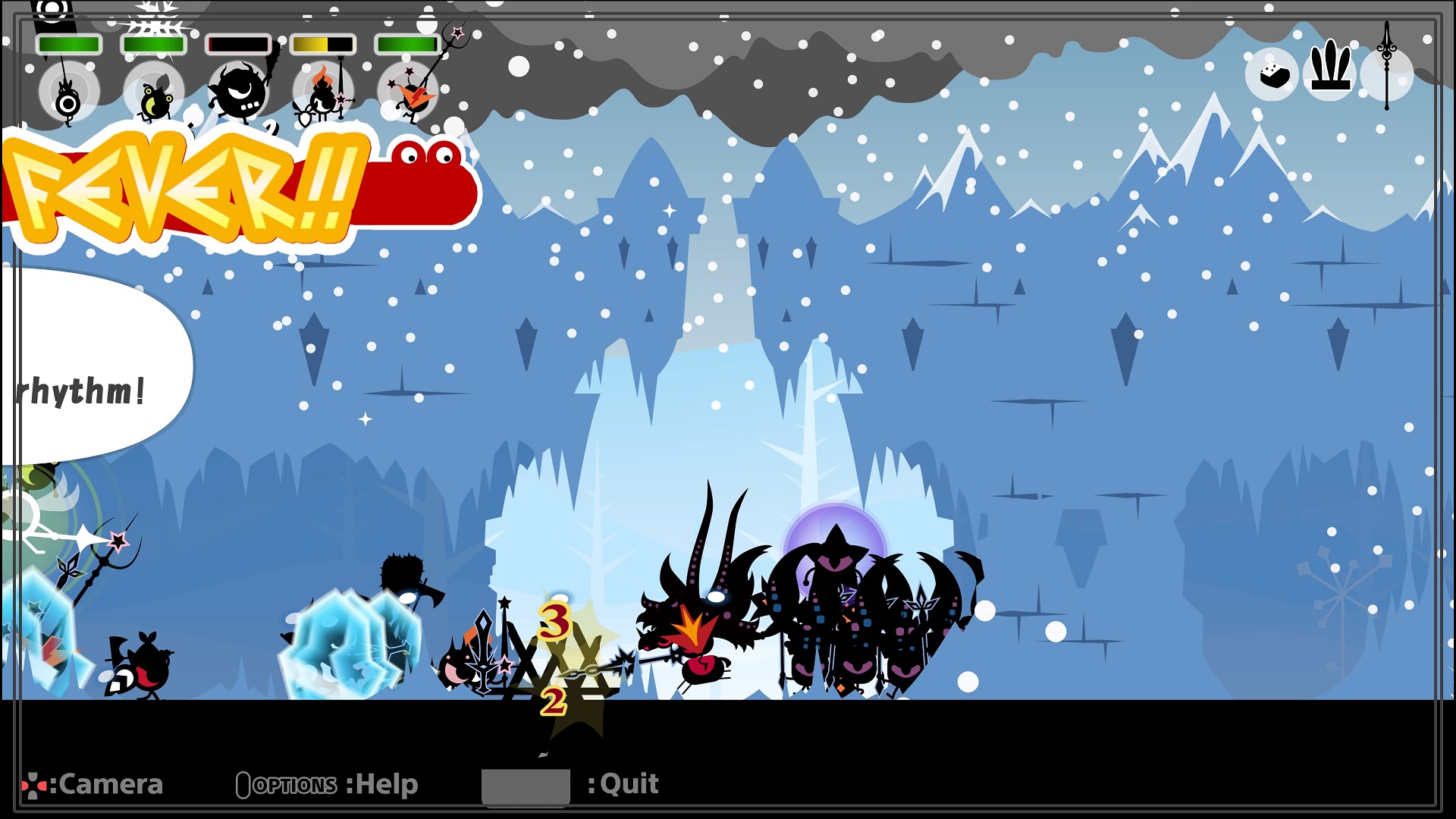 Piling onto the issues are some design and interface choices. There are plenty of situations that require the use of on screen prompts to make the correct move. For example, there’s a boss that will wreck the Patapons with a devastating series of melee attacks, and then back off to allow the player to attack. So it’s a matter of linking shields during his attacks and pressing forward when he backs off. This is a simple matter. The screen ends up becoming covered in word bubbles, however, making it impossible to see the prompt to move into defense or attack. The solution was to play it safe, attacking for two to three commands and then backing off, making an already long fight take even longer.

That length comes into issue with the upgrade system. Each type of Patapon can, and should, be upgraded or evolved. Doing so requires resources, something that comes in finite supply and the required types being spread across numerous maps. Then, there are maps requiring certain unit types that have been left by the wayside in the building of the tribe. Because of this, it seems like at least eighty-five percent of the time is spent replaying old stages to grind out materials to be prepared for the next, fresh challenge. This can lead to ample frustration. Fortunately, there are some newly-added minigames that dole out some of the materials in quicker time, but the time needed to unlock them, and the rate at which the good stuff is dropped means that this tweak doesn’t improve the balance from the old game as much as liked. 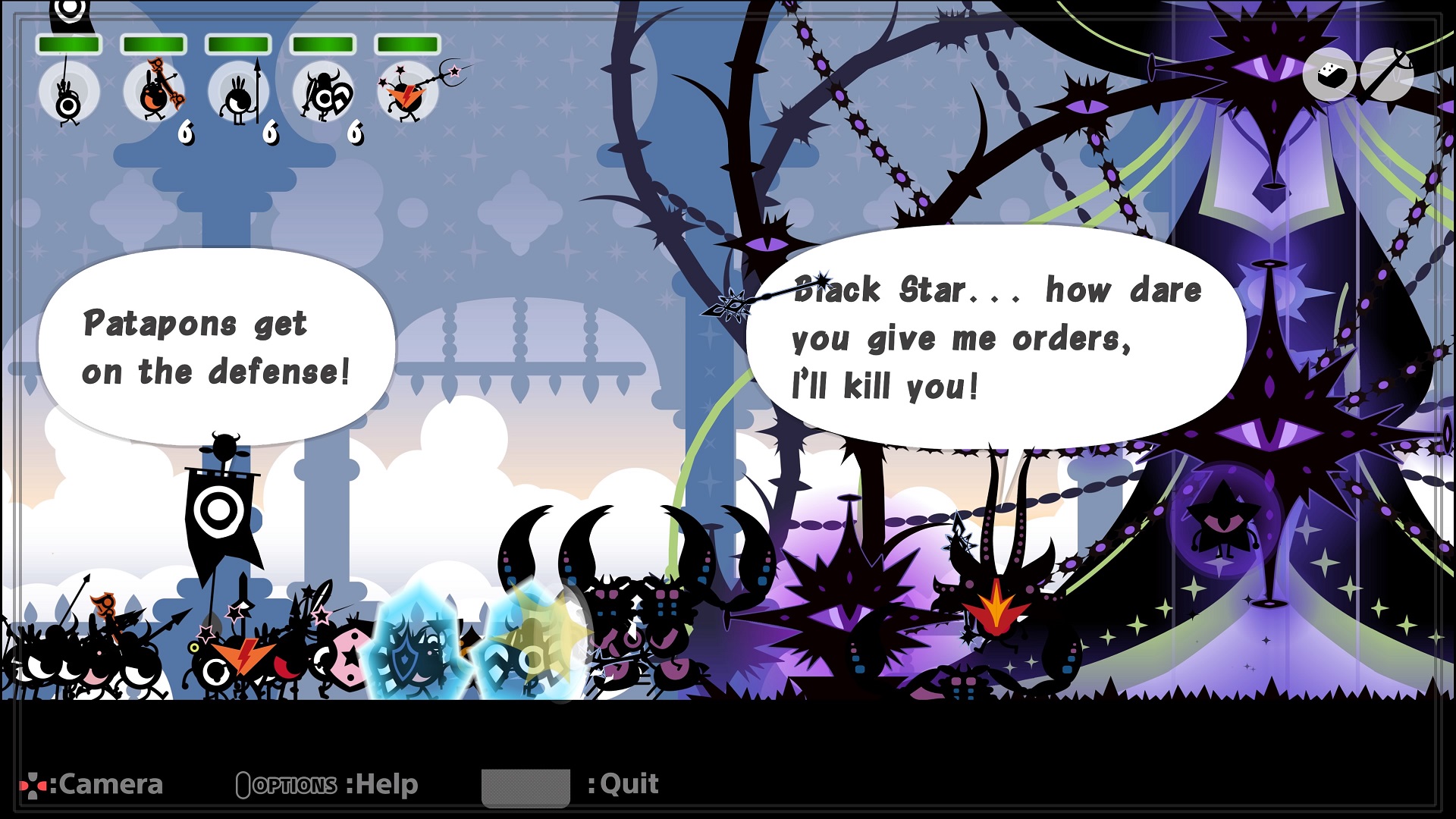 Frankly, the easing of item drops does seem to be the primary purpose of the new games that were added. They don’t add much in the way of depth or longevity to the title. Mostly, they seem to revolve around smashing a button in time with the music, offering little in the way of variety and freshness to the package. They also take a long time to unlock and even longer to open up the higher tier versions that dole out the rarer items needed. It’s a nice thought, but not a game changer.

While the preceding paragraphs have mostly focused on the negative, it does come from a place of love. The title was originally designed and built around providing a bite-sized experience, something to be played in short bursts. Patapon 2 Remastered doesn’t change that. When viewed through this lens of not “over-doing” it, the game remains a charming and unique take on strategy action and squad creation. Hearing the triumphant fake horns that the little tribesmen layer on top of the basic beat when maintaining the rhythm for a decent period of time endears the little boogers to the player. Considering each individual unit is more or less disposable in the grand scheme of things, the little animations and sounds added still give them a level of personality that shouldn’t be possible. Patapon 2 is remains a great game. Patapon 2 Remastered doesn’t change that. It’s just that it hasn’t aged as well as one would have thought. 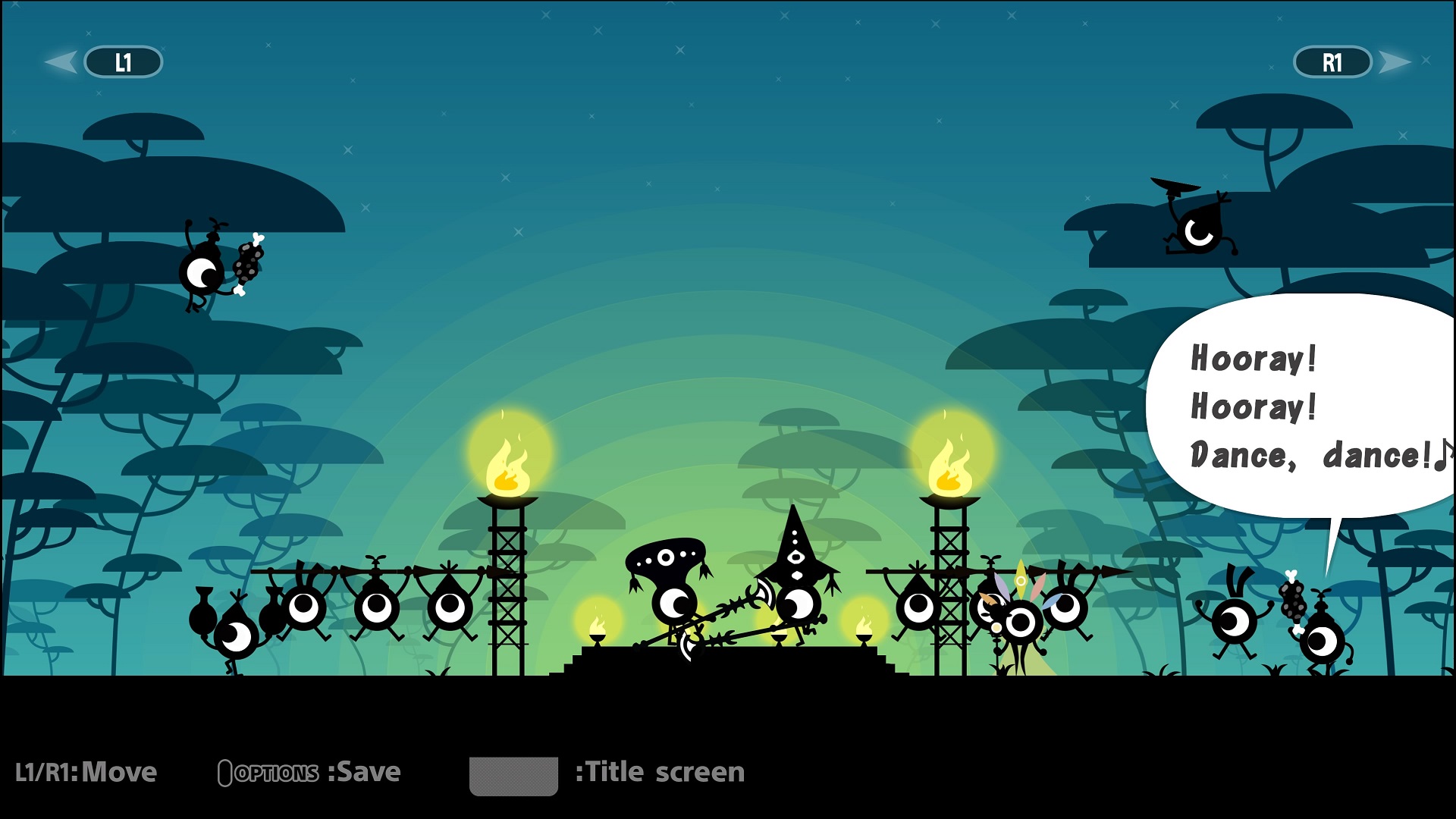 Despite having the rose-tinted glasses violently ripped away, Patapon 2 Remastered is an easy recommendation to existing fans of the series. The 4K conversion adds to the title and the asking price is right. Newcomers, however, should start with the first game, which is also available in a Remastered format for PlayStation 4. This sequel was balanced to appeal to returning players and the update doesn’t change that. The original was simply better balanced to bring new players in. In the end, though, after the experience of playing through the remaster in a binge setting brought to light some foibles that went previously unnoticed, this is still a top quality entry in a series that has gone woefully underappreciated. Hopefully time will change that.