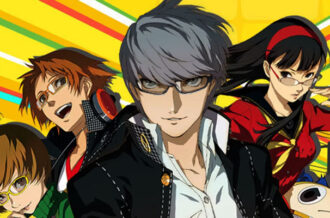 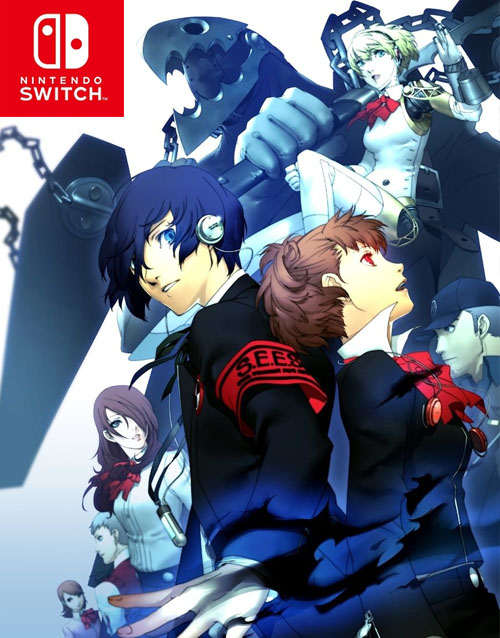 It’s surprising that it has taken Atlus this long to remaster one of the best Persona games ever made, and we’re of course talking about Persona 3. This was the first fully 3D title in the franchise and it pushed the franchise into the spotlight, showcasing the phenomenal soundtrack of Shoji Meguro and a surprisingly dark and dreary story that has players emotionally involved. This has been locked on the PlayStation brand for ages, with the first release hitting 2006, FES a year later and finally Portable two years after that. Unfortunately, or fortunately depending how you look at it, Atlus has elected to remaster the latter version, bringing forth a game reworked specifically for a handheld device. Even so, players will now get to experience one of the strongest JRPGs out there on even more platforms, along with a few adjustments to make it more accessible to players.

The story of Persona 3 is closer to a traditional Shin Megami Tensei title in the sense that there’s a secret organization monitoring the situation of another parallel world. You play the role of a male or female protagonist as, as you’d expect from a Persona game, they’ve been transferred to a new school. Instead of staying with a family member or a family friend, they’re in a seemingly scarce dormitory that sets things up as the headquarters of said organization investigating a giant spiral in the other world at night, Tartarus. Even though a lot of the modern Persona games deal with more serious matters such as suicide and sexual abuse, Persona 3’s atmosphere and overall tone feels darker than expected. You’ll be going through your daily life as a student, taking tests, making friends and building potentially romantic relationships, but there are characters that will be killed off and scenes that will pull on your heart strings at times. It’s what you might expect when its successors used cards and masks to invoke their persona, whereas in Persona 3, the characters put a gun to their head and pull the trigger. The cast of characters are solid, although maybe one of the weaker of the franchise, having only a couple of standout memorable additions. 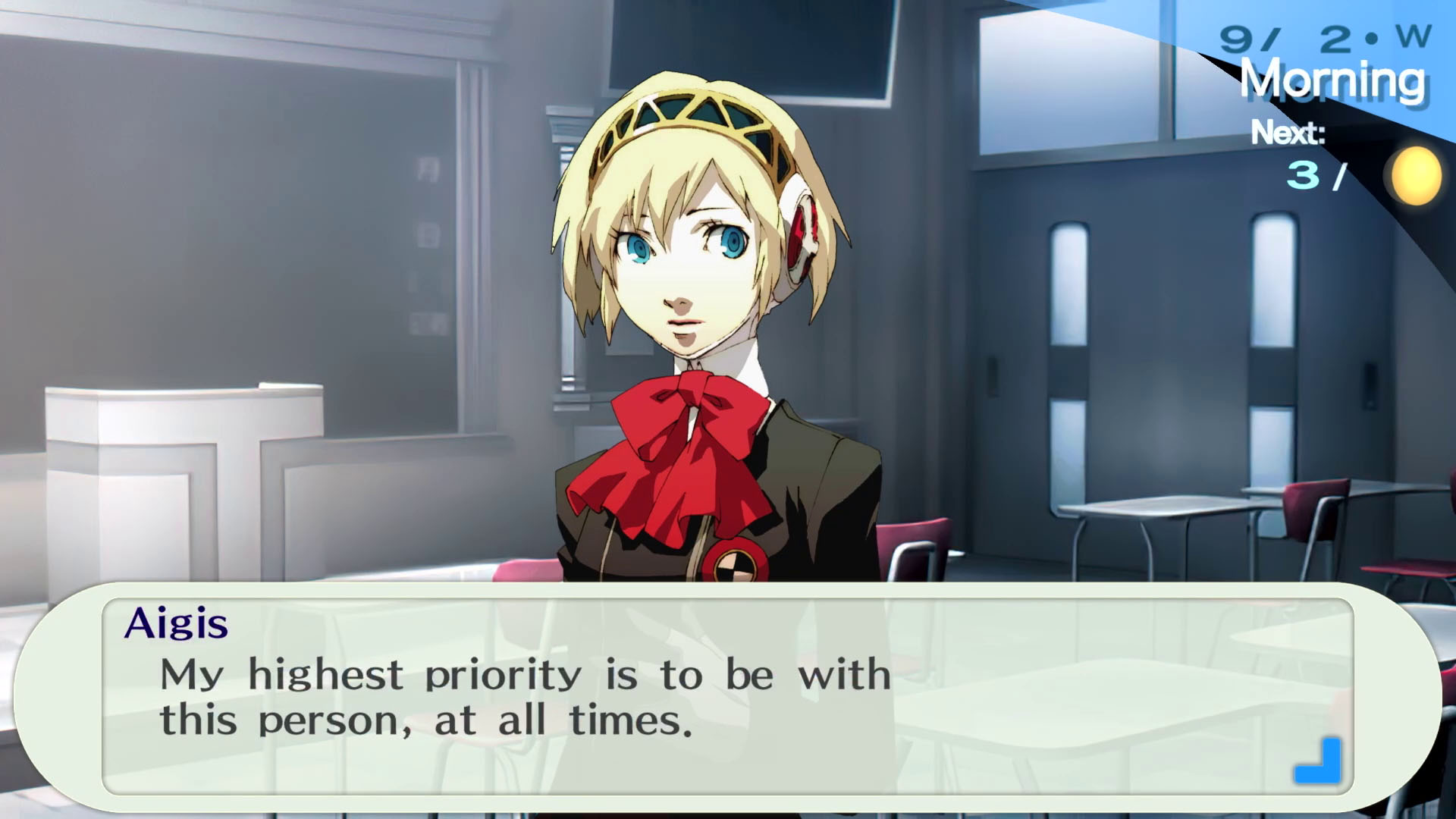 Those coming from Persona 3 or Persona 3 FES will be surprised by the change in structure Portable has over its original releases. This is entirely built for a limited portable device that was developed seventeen years ago. While the console version of Persona 3 had the freedom to traverse a 3D landscape, Portable instead puts you on a 2D plane where you don’t have control of the character but instead of a cursor as you interact with essentially static images. It’s closer to a point-and-click adventure in this aspect. This is purely for outside of the dungeons as inside you have full control over a character; most likely because of how barren the dungeons are as they’re shrouded in darkness and come in simply corridor after corridor. On one hand, this is good for getting from point A to point B in a quick manner, but at the same time it takes away from the beloved exploration in the Persona games. I wish Atlus would have gone the extra step and attempted to merge the two formulas in some way, but then again, they would have to have completely recreated scenarios and animations for the female protagonist to do so. Regardless, I almost wish I was playing the PlayStation 2 version over this at times; it may have slightly less content (namely a female protagonist), but it feels more complete as an experience.

On top of it, if your first entry into the franchise was Persona 5, then Persona 3 Portable will feel more archaic to you. For starters, this is similar to Persona 4 in the sense that dungeons’ floorplans (outside of bosses and story-specific locations) are randomly generated, meaning no floor will look the same as someone else’s. There isn’t necessarily a way to negotiate with Persona as your primarily goal is simply to defeat them and then hope there’s a “Shuffle” at the end of the fight that will grant you various rewards, or in some cases, negative effects. These can range from obtaining specific Persona, restoring your HP and SP, or simply damaging your entire party. It’s actually easier as it usually amounts to following a rotating or shuffled up card. The fusion settings are basic with only a couple of options to choose from, and while the combat triangle of elements more or less remains, there are fewer unique options than you might be used to. Fortunately, all of this still amounts to a highly-addictive and engaging JRPG that’s traditional in every sense of the word. It’s a simplistic and satisfying Pokemon-esque system.

As mentioned before, Persona 3 Portable was developed for a rather old handheld device, so visually this is far from the most technologically-impressive experience. Because of these limitations, Persona 3 Portable does run smoothly on the Nintendo Switch, making it the best way to experience the near fifteen-year-old release. Clarity is up and down depending how you look at it, as the obviously-placed 3D characters standout as high resolution versus some of the backdrops and stills that have had their resolution artificially risen to the point they look smudged. That’s not to say every inch of the backgrounds look this way as there’s still sharpness in certain scenarios, but for the most part you can tell this is simply upressed. This is in comparison to say Persona 4 Golden’s remaster which saw a great deal of textures reworked and sharped — some of which are small pieces of detail in the background that are actually readable. Fortunately, the audio department more than makes up for it as the soundtrack and addition of the Japanese voice track are a huge selling point. Being that this is based in a Japanese school setting, it only makes sense that we’d have the Japanese vocal options available, and the jazzy beats of boss battles or out in the overworld will have you bopping your head. 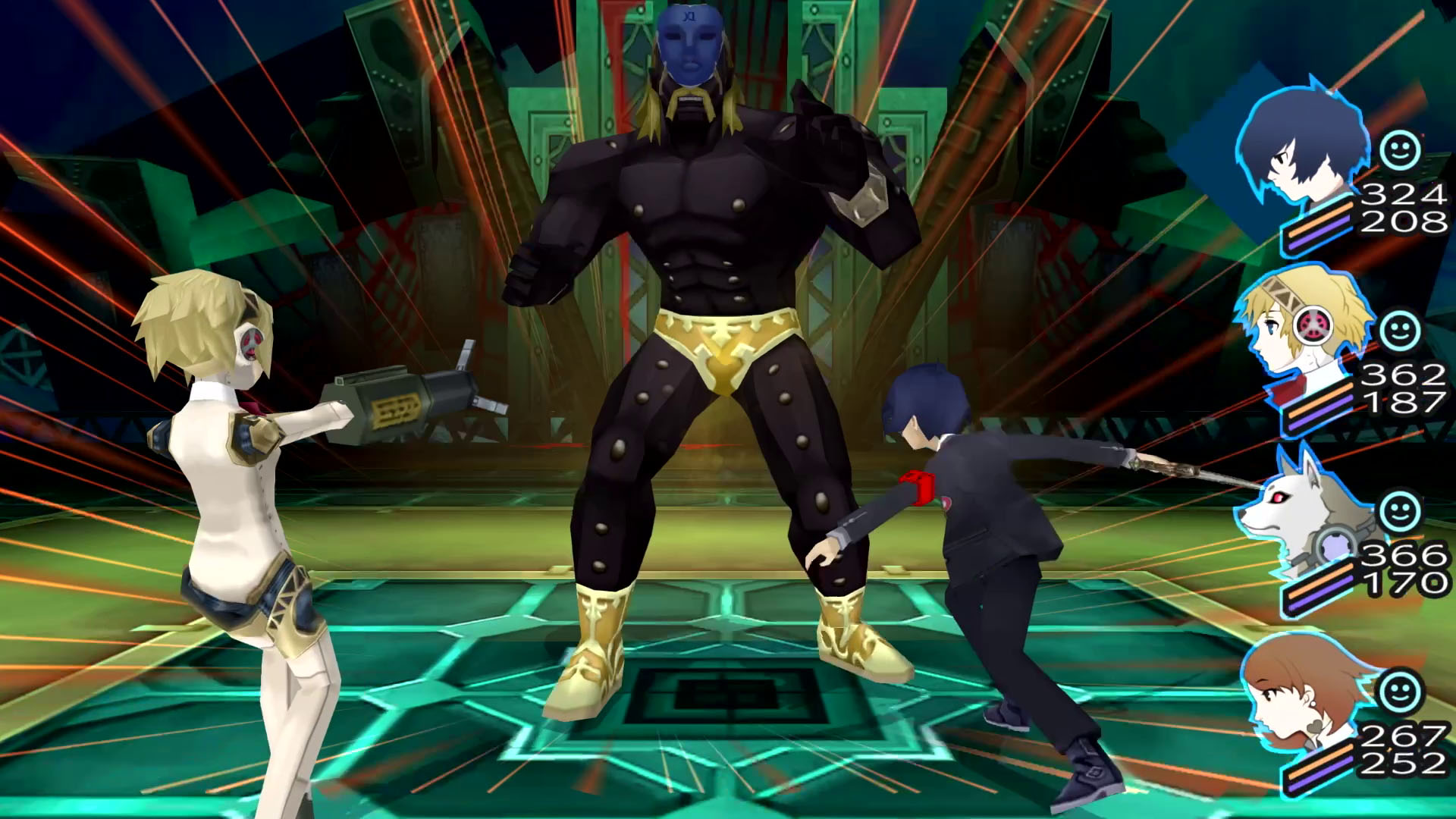 Persona 3 Portable was a gem when it came to the PlayStation Portable nearly thirteen years ago, but it was very much meant for the hardware of its time. The remaster has no doubt been touched up, the vast majority for the better, but with that said, this does feel like a portable game from nearly twenty years ago. The PlayStation 2 versions may have been a better pick for remastering, despite losing out on some content. Regardless, Persona 3 Portable is still a fantastic entry, kicking off the subseries that ended up surpassing the mainline Shin Megami Tensei titles. It features a solid cast of characters, a remarkable storyline and an addictive combat system — even though it hasn’t aged as well as we had hoped. Whether you’re a returning or Persona-curious gamer, this is a phenomenal value.