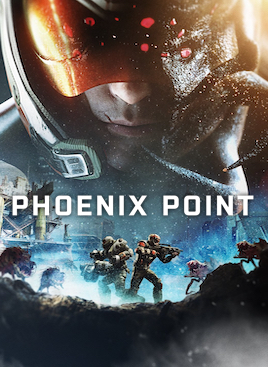 For all the frustrations afoot in the down-and-gritty tactics of Phoenix Point, it’s assuring to know that the latest top-down strategy title, led by XCOM creator Julian Lollop himself, doesn’t end up defined more so by its back-end workings. Naturally for a game built up as the spiritual successor to XCOM, the sight of a point-blank shot missing time after time would almost seem like an ironic point off when it came to the “aesthetic” department. On matching Firaxis/2K’s recent rendition of arguably the most famous top-down/turn-based strategy title not published by Nintendo as of recent. It’s still an annoying factor to accept, let alone counter — like a game of Battleships where your previous five turns can often go the way of: MISS MISS MISS HIT MISS — but Phoenix Point clearly wants to appease the crowd anxious on ditching such a staple brand for something new. Something that, arguably, introduces a few genuinely interesting ideas into the fold and yet still shows its own share of apprehension on making this the best stand-alone release it can be.

Whether it’s down to the budget, the time-frame or something else we may never get insight on is beside the point. Beyond the decent show of destructible environments, the opportune pockets of cover amidst its battle-laden environments, even the variety of enemy designs — ranging from rival humanoid factions, to abominable crustaceans, to anything in-between the two. Phoenix Point’s technical limitations and questionable motivations on what constitutes as “challenging” amidst the heat of turn-based encounters/missions is a frustration players will need to convince themselves they want to toil with. For those who, begrudgingly, bear with the plentiful missed shots and some wonky AI mannerism (both with the enemy and even with your own accrued band of soldiers and units), Phoenix Point does eventually open up mechanically but also, pleasingly, on the lore and role-playing front too.

The premise behind the story isn’t hard to grasp. A long-dormant virus known simply as the Pandoravirus has been let loose after years of the Antarctic polar ice melting. What starts as increased mutation and violence in the sea life soon sweeps to the land — infecting humanity, and as you may have guessed, leaving us on the brink of extinction. A rapid change in the environment and the establishment of three major polarizing factions later, you are tasked with combating the creeping viral threat and as a result deciding on which faction — which ideology — will get a big-enough say on humanity’s fate thereafter. Outside of some stock, introductory cutscenes of your designated Manticore ships touching down pre-mission, most of the story is told through expository dialogue complimented by mere illustrations and character profiles. That’s in no way a criticism against the visuals or the lore that Phoenix Point drip-feeds its players, despite the frequent return to unseen voices narrating some hefty, expository dialogue. 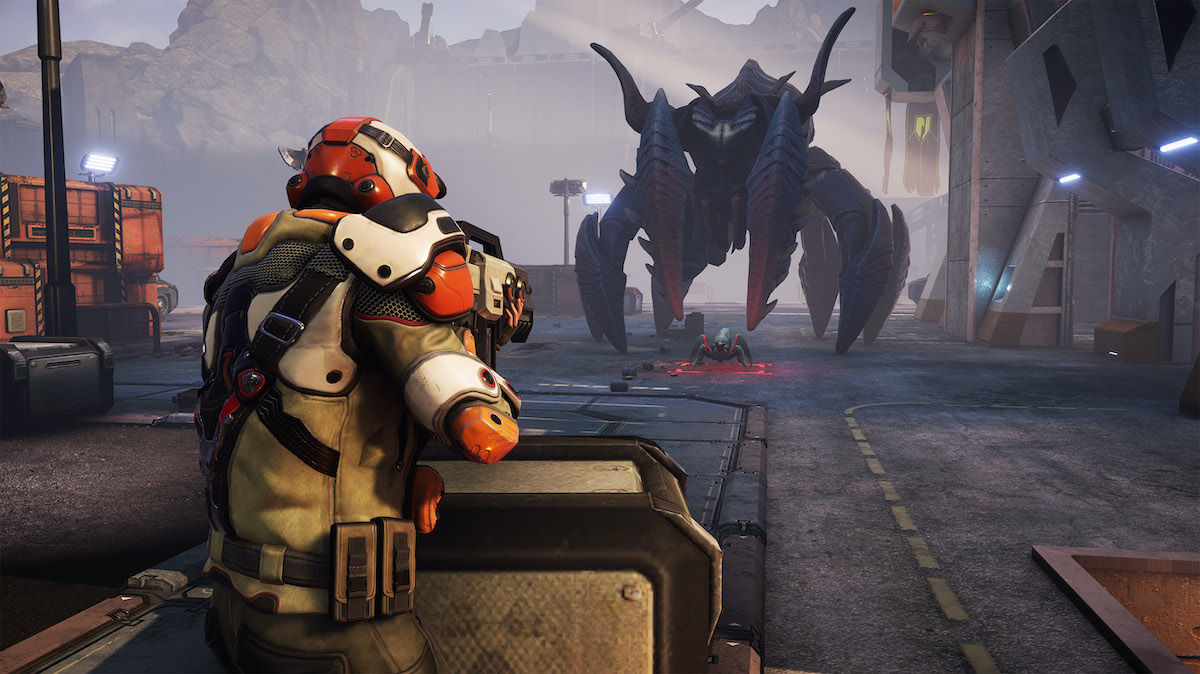 The only real wish you can harbor as to how Phoenix Point could have been improved is notably in the sound department. Particularly the soundtrack which, in all honesty, is not exactly forgettable, but rather simply feels non-existent. Even with the notable jump-cuts signifying where the start and end of a particular loop happens. There’s no recognizable melodies or hooks or worthwhile tracks to highlight here; the anxious, ambient leanings, a fair aspiration to hit, just never really add anything to the tone of the game. Outside of some mildly-pleasant background noise when one is circling the globe, trying to grasp on where to scour next. Perhaps the reason for the game’s enjoyment during the more globe-trotting, commandeering segments, is the knowledge that decisions need to be taken at some point and that gathering any and all vital information will prove helpful.

That sense of near-desperation and the relevance of detail can be largely put down to the red mist that denotes the eventual take-over of the planet; pixel by pixel, as the in-game time continues to pass, tiny slithers of land become noticeable chunks of certain continents. The pandoravirus sweeping in from the shores, threatening nearby settlements and often valuable places to restock on materials and recruitable units alike. If there’s one thing Phoenix Point gets right in this regard, it’s the most-precious resource of them all: time. At any point you can pause the passing of time in what is the main hub of command where all options — from the state of your bases, to the many types of items and research that can be invested in — are laid out. Of course nothing can be done if time is stopped, so while allowing a few in-game days to pass may allow you to recuperate lost health and stamina (any of which is lost during combat, carries over should you refuse to unpause time), it also means the virus continues to spread — creeping closer and closer to not just the areas you’ve already explored and established, but also those you haven’t.

Don’t be surprised if you find yourself stopping and resuming time at frequent intervals, as Phoenix Point’s absolute reliance on time/resource management is its biggest pull. Particularly in a game that is by no means charitable with its dishing out of materials and notably upgrade points — used to bolster soldier’s skills but also unlockable perks and traits. Phoenix Point may be a game whose successes lie on the battle-grounds down on Earth, but overhead — commandeering each panel of crafting/research/base and unit management alike — is where the pressure can truly start to build. And that’s without factoring in optional missions and tasks that require you to, eventually, work against other factions — furthering that divide at a time when all you want is to have everyone on the same side. 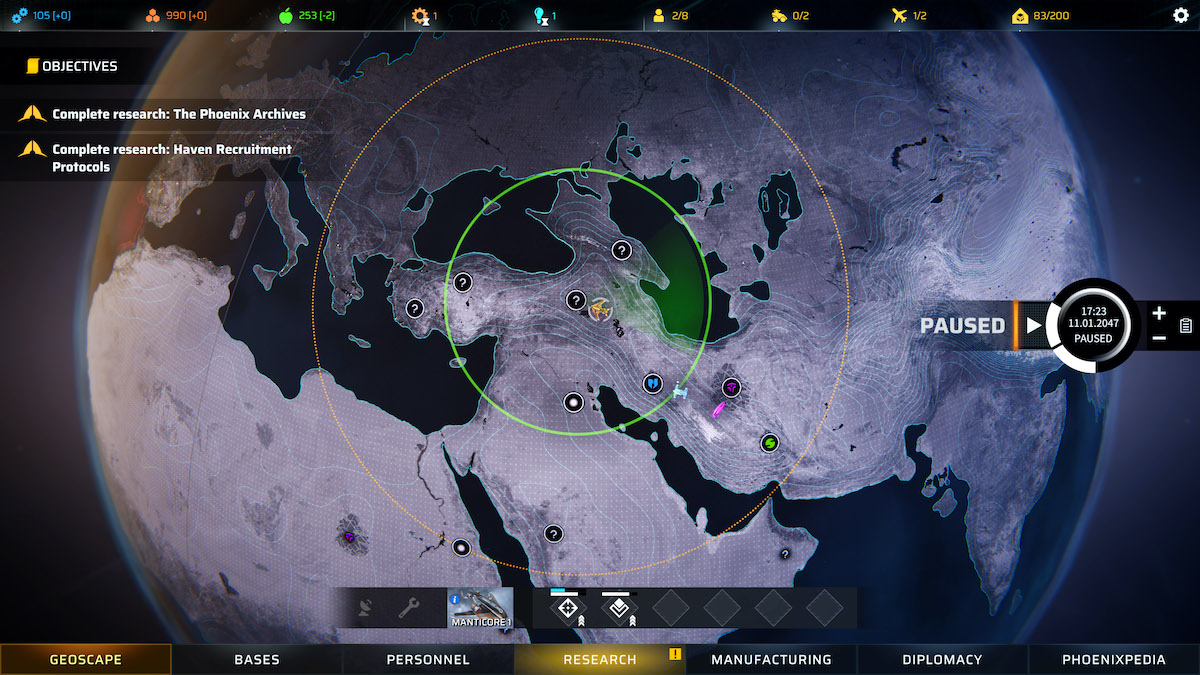 So what of the turn-based combat? Well as stated, and it really shouldn’t be that much of a surprise, much of XCOM’s emergent joy’s and back-end annoyances do show up on a frequent basis. Shots that should, but don’t, hit. Getting a unit to move to what should be a simple-enough space, but instead prefers to take a bizarre long-route in doing so. Animations across a degree of actions, from climbing over obstacles to getting hit by return fire, are also disappointingly absent and a little questionable at times. Commendable some of the destructive physics may be, it’s a shame that that sense of reaction isn’t shared by some of the units — friendly and foe alike — spread across the many procedural maps. Speaking of which, for a game whose environments and map design is mostly generated on a whim, it’s surprising how little this randomizing becomes a detriment. A plentiful amount of multi-floor buildings, environmental cover and possible routes keep the strategy from feeling in anyway unfairly restricted.

The most notable mechanic in Phoenix Point comes by way of the units themselves and the fact that a soldier’s turn no longer forces players into making the choice between simply attacking or moving to a new position. Instead, soldiers are given Action Points (or AP) to allocate across a variety of passive and active abilities. Quickly it becomes clear that the ability to fire as well as moving to cover is not only an option, but is the desirable way to achieve victory. The fact grid spaces are also clearly color-coded — denoting if a unit can still act offensively — is a welcome touch. Even if the result doesn’t always guarantee a direct hit on a nearby enemy, even after reverting to first-person, pin-point aiming. The element of willpower is also a nice inclusion, a sort of calculated accompaniment that allows units to perform additional abilities that can help turn the tide of battle. Regenerated when a soldier performs something like killing an enemy, but can also incur negative status effects should it fall all the way to zero.

Positioning, baiting one’s target as well as managing many a stat are again nothing new in the realm of strategy, but there is at least some addition of risk that Phoenix Point for the most part manages to manifest as a genuinely useful tactic. Even the decision on which targeted parts of an enemy’s body to focus on do provide some key moments of thinking long-term over short-term. The added incentive being that disabling certain limbs or components prevents a foe from using an attack associated with that part of the body. The interface and denoting of health/armor left isn’t the best or clearest interpretation — with its insistence that weapon effectiveness is denoted by how “white” a piece of the health bar will go — but it’s not too much of an off-put for the moment-to-moment tactics to lose their appeal. 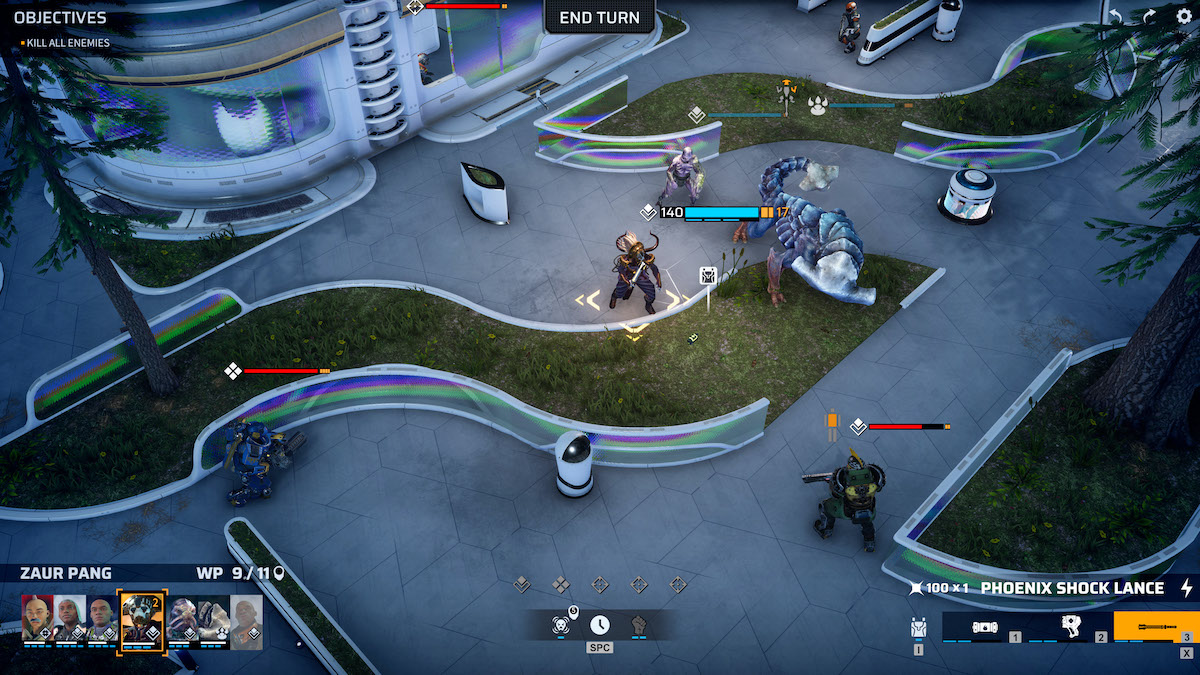 Whether you’re jumping directly from XCOM, or jumping in completely oblivious to what the genre entails, there’s a lot to like in Phoenix Point’s pleasant assortment of boots-on-the-ground tactics and overhead, commandeering strategy. With enough new ideas, consistent world-building and moments that drive home the need for an eye on both the long-term as much the short-term, the game’s scurry to save humanity is one that’s pleasant in its victories and costly in a player’s failings. It’s a shame that the technical side isn’t quite up to scratch and the manner which certain details are laid out aren’t always the easiest to work out. Call it an insistence on reinforcing the strategy side of things or not, the game can fall victim to its own limitations. But for those with an adoration for lore and for that looming sense of desperation more so, while not entirely original in tone or presentation, Phoenix Point does just enough for those restrictions to fall by the wayside.