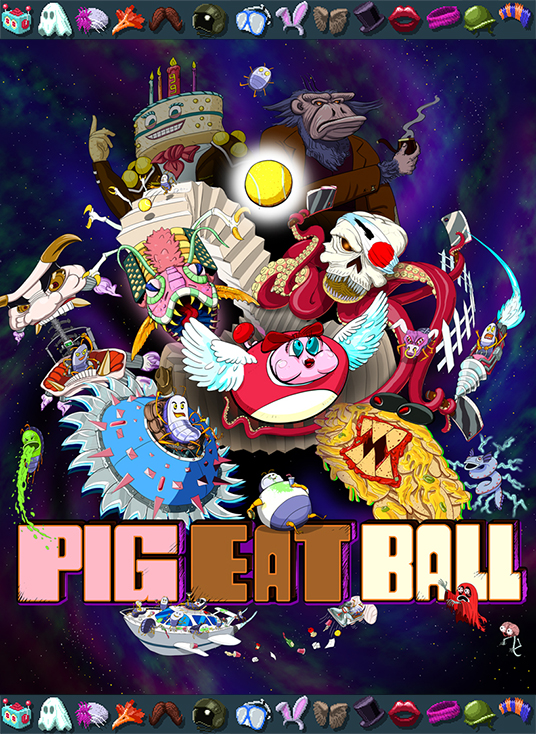 King Cake is an eccentric ruler. On the one hand he seems completely capricious to the point of distracted insanity, but on the other he built the space station from a tiny little hub running of the power of a single pearl into the multi-unit monstrosity of its current form. Now he’s set up a massive tournament to find a suitable husband for his daughter, Princess Bow, running across all the satellites of his kingdom and using a ridiculous amount of pearl-based energy in the process. It’s not something the station can seem to afford but everyone is used to King Cake’s proclamations working out so they just roll with it. Princess Bow, however, doesn’t particularly want to be anyone’s prize, so she dons an ultra-flimsy disguise and enters the contest to win her own hand in marriage. Whether it’s all an elaborate plan by a devious but playful ruler or madness run rampant is anyone’s guess, but the game has started and Princess Bow is determined to win.

Oddly enough, King Cake’s games are all designed around Princess Bow’s abilities.  A mustachioed clam will give a pearl to anyone who beats a selection of levels, between two to five per clam except for the occasional single-level boss encounter, and whoever collects all the pearls wins.  The point of each level is to eat a certain amount of “yummies”, which for some reason are tennis balls, hence the name “Pig Eat Ball“.  Except Princess Bow isn’t actually a pig but rather some kind of odd pink alien with a snout that’s almost constantly sucking in air or anything else that comes in contact with the zone of inhalation.  This is great for inhaling (Yes, sucking, I know. Just… no.) tennis balls but not so good for spikey-balls, so managing the inhale becomes fairly important.  You can turn it off in a number of ways but it’s active far more often than not, and generally pretty helpful. The inhale can be canceled by hitting the Slow Down button (useful for tight spikey passages), the Dash (useful in almost every single other location in the entire game) and for a second after eating a ball. Which sounds nitpicky but when you’re dashing along at full speed racing the clock to get a gold medal in a room where ten balls, a couple of bombs, and a few spikes are bouncing around, managing the intake becomes incredibly important.

Output, however, can’t be ignored either. As Princess Bow eats she gets bigger, making it impossible to fit through thin passages without slimming down a bit. This is done by barfing out the extra balls in a torrent of slime-green projectiles, bouncing around wildly and coating anything they touch with queasily-organic goo. Anything floating around (like a spikey-ball) is a physics object, so you can use the vomit-balls to bounce them away, but the level isn’t over until you’ve eaten all the balls so anything you barf out will need to be reconsumed. This is, obviously, pretty amazingly gross, and even a space-pig-alien can only stomach so much of that. The balls will turn from stomach-acid green back to a delicious yellow after several seconds, but the princess can still eat a few of the green ones before getting sick again. 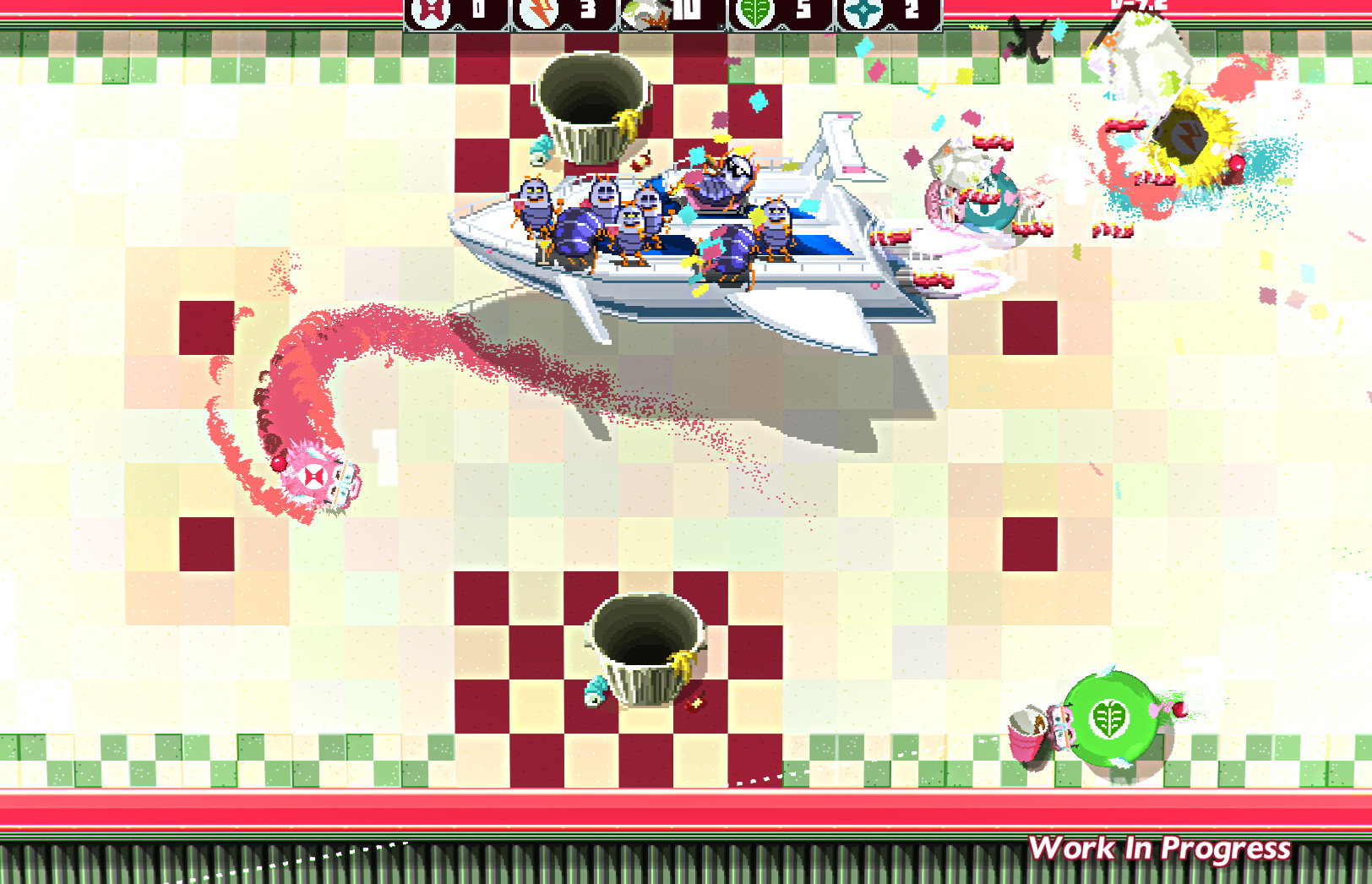 Whether getting sick from eating regurgitated tennis balls or taking a hit you’ve got a few seconds before they come up, as indicated by a timer above the princess’ body, and the key to speedy level completion is learning to manage this. Take another hit or eat another ball and the timer restarts, meaning you can chain damage to make up for lost time. The key to the best time in many levels is learning when to purposefully take a hit, running along the ragged edge of explosive regurgitation to either completion or, at least, a safe small place to let fly and easily recollect your lost lunch.  This even works in the levels where you can only take a few hits before death, assuming you’re careful about exactly where you allow the damage.

While Pig Eat Ball has the setting of a mascot-based adventure-platformer it’s actually at heart very close to an arcade game. The large level hubs have plenty of secrets to chase after, usually rewarding you with either a new disguise or a power-up you can activate at level start, but the bulk of the game is the huge variety of levels that explore every gameplay mechanic to the fullest.  The 41 levels of Sushi Gardens, for example, tend to play with the wasabi block.  Touch it and a blob of wasabi starts floating about, and eating it instantly starts the barf timer.  You can choose to navigate very carefully to avoid either hitting the walls or picking up the wasabi, go full pig-in-a-china-shop and try to keep the chain alive to keep restarting the barf timer so it never blows, or either find a peppermint power-up in the level or activate one at level’s start to negate the worst of it.  Some levels have tight mazes made of wasabi and others carefully place the blocks in the areas most likely to cause trouble.  The Sports Barena, on the other hand, features cue balls, bowling balls, and other bar-appropriate toys, constructing whole series of levels around a theme.  There are even arcade homages kicking around, including Breakout, Pac-Man, and Q-Bert.  While you can amble through each level at your own comfortable pace, the real goal is to beat the timer and get a gold medal.

The odd thing about the medals, though, is how completely arbitrary the requirements are from one level to the next.  One level may hand out a gold practically because you showed up while the next may be an exercise in precision and memorization.  Starting over a level to earn the gold is almost instantaneous, but it’s more than a bit maddening to finally nail a good time only to find the game somehow switched into Easy mode, taking away any medal reward for completion.  It’s hard to know if that’s supposed to be a feature or not, though, because Pig Eat Ball develops a good number of bugs as it goes on.  I’ve warped through solid blocks, got a disguise far earlier than it was supposed to unlock, and been forced to restart levels when the princess got stuck in a passageway too thin for her bulk to get through and I couldn’t barf out the balls to slim down.  Thankfully most levels are fairly short so when that happens it’s not too big a deal to restart, and Pig Eat Ball is fun enough that the promise of the next set of levels is a good reward for pressing on even when things go wonky. 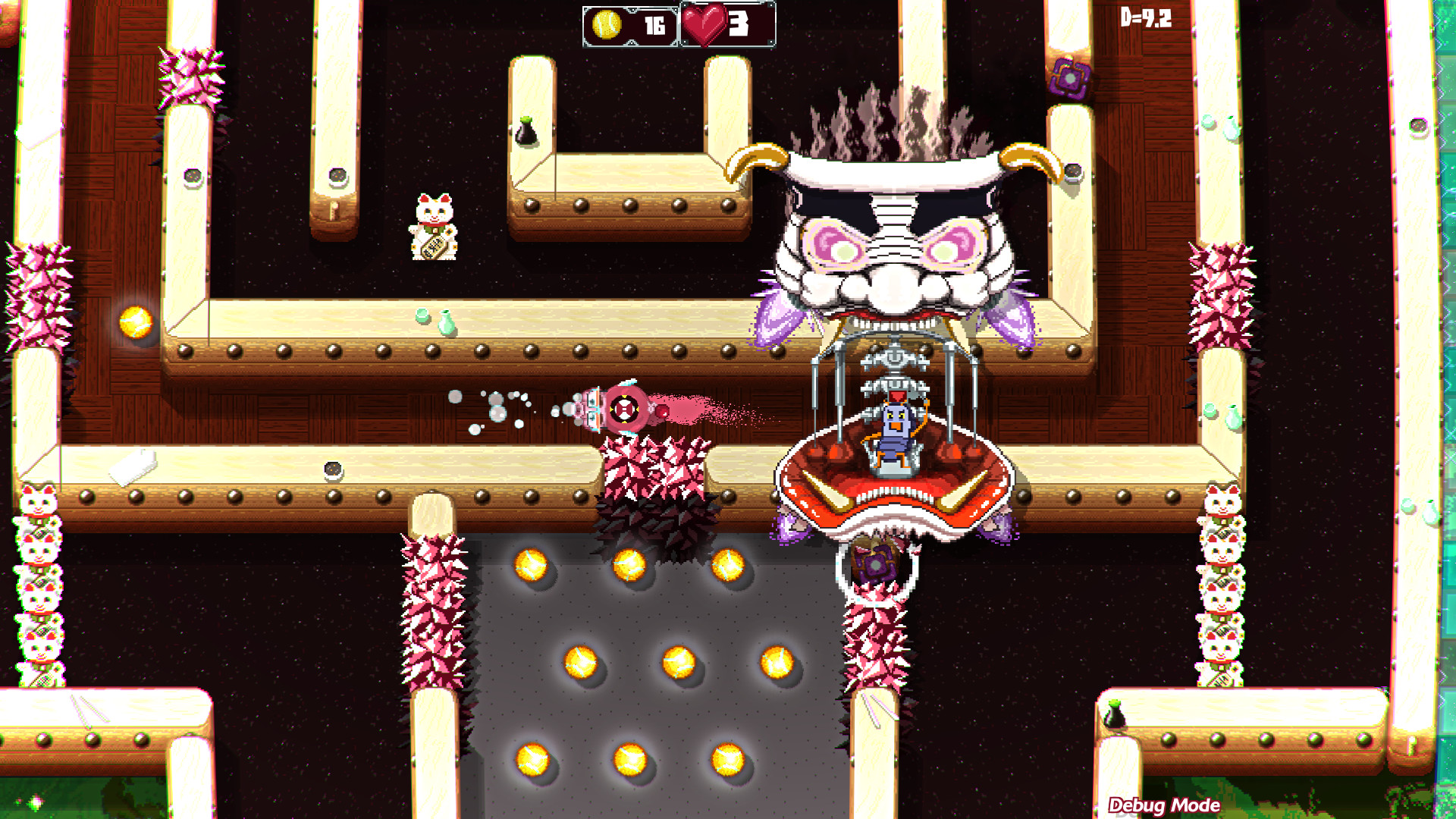 Princess Bow has her work cut out for her.  The space station has literally hundreds of levels plus secrets and goodies to chase after.  Her father seems to be a total lunatic, power is failing across the station and she’s barfed more times in a single day’s adventure than any hundred people should in their entire life.  Pig Eat Ball is huge, weird, frequently intentionally ugly but always in a lighthearted way and incredibly playable.  The short levels segue one into another, even when you repeat one half a dozen times to get a decent time, and when you’ve cleared the current batch and earned its pearl a new doorway opens and encourages you to keep on exploring.  It’s hard to resist the call of a new area when you know there’s a puzzle hiding in it, waiting for you to solve at your own pace before the next collection of challenges puts you back up against the clock while exploring yet another way to use Princess Bow’s abilities.  Pig Eat Ball is a crazed monster of action and creativity, more than a little bit gross, but hugely entertaining to balance it out.