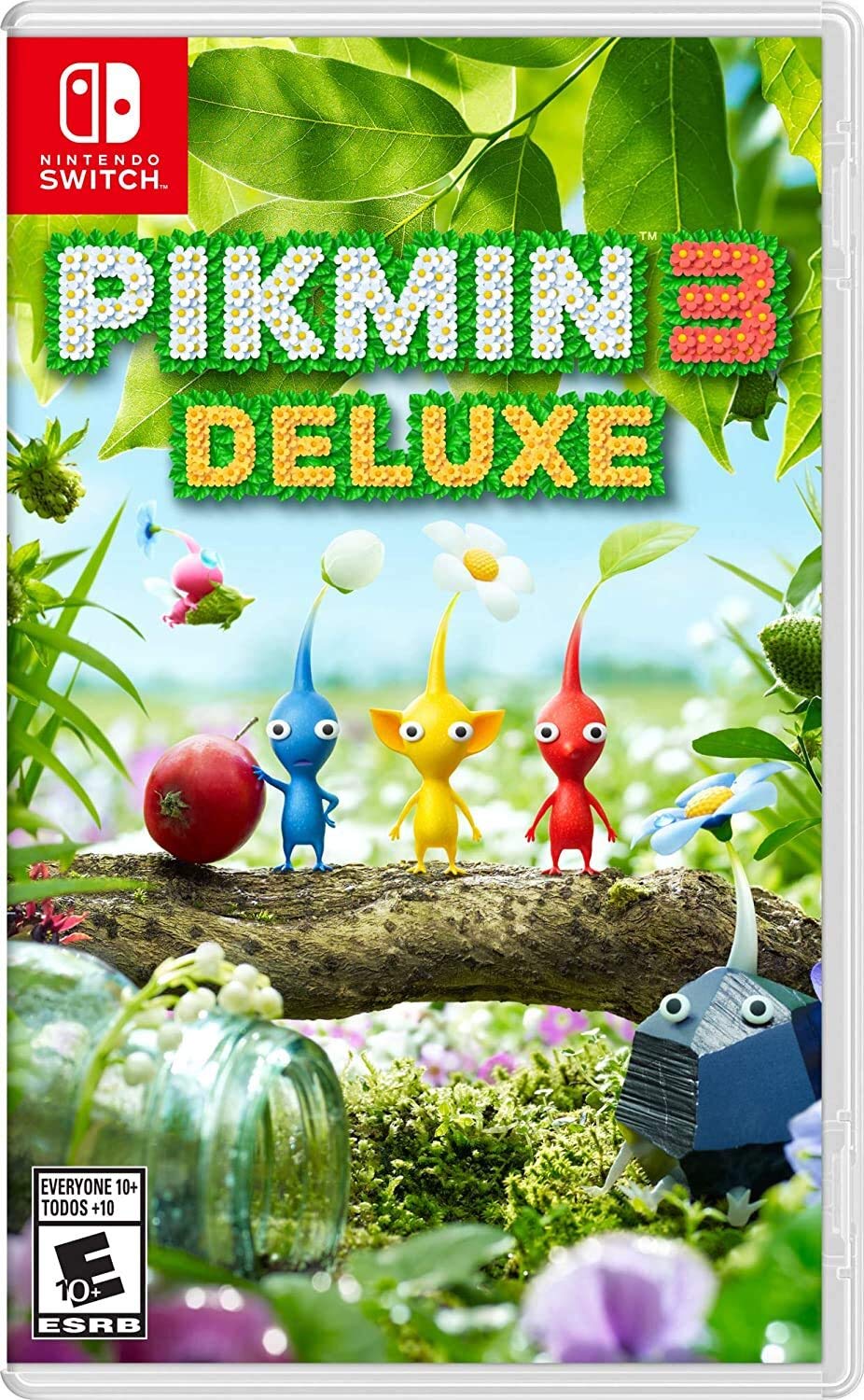 Pikmin got its start as a unique title for the GameCube and would go on to have two sequels in addition to one spin off. The third entry, aptly named Pikmin 3, saw decent success when it originally launched on the Wii U despite the system’s shortcomings. Fortunately this year we got the surprise announcement that the title was returning once again to the Nintendo Switch so even more could hop on board to uncover the unique plant-like lifeforms awaiting brave explorers.

For those unfamiliar, the story of Pikmin 3 follows the story of three brave adventurers sent out from their home to try to bring home back to their starving planet. On the search almost every single planet is found to be devoid of food, until a singular one is found. The three known as Charlie, Brittany and Alph are peacefully on their way when their ship begins to malfunction and sends them hurtling down to the planet in three different directions. After crash landing the three scramble to get themselves aware of the situation and begin looking for one another, all before stumbling across the unique life forms known as Pikmin. Coming in all shapes and sizes, these Pikmin are quick to help the explorers on their journey to meet up. Even after finally getting back together, however, the three discover their ship is missing a vital component that will keep them in the system until it can be located. Believing it with Captain Olimar who appears to also be on the planet, the three set off to find him along with their new Pikmin companions.

There aren’t many other titles like Pikmin which is a unique mix of time management, real-time strategy and puzzle solving. There are a total of five different types of Pikmin that supply the three party crew with an assortment of abilities such as resistance to fire, flying and just being a heavy rock to break things. The general goal of each story stage is to find the objective which usually ends in a boss fight. Each day has a time limit before the Pikmin and crew must leave as night time brings out deadly creatures that will attack and Pikmin left behind. As the title implies, Pikmin are integral to just about everything as the crew themselves is rather useless outside of being able to control them. The crew members can freely explore any area throwing not blocked off by them and will spend their time sending out Pikmin to attack and gather things to bring back to their ship. When encountering enemies Pikmin will be in life or death situations, with every enemy wanting to eat the Pikmin and some being able to burn or electrocute them. 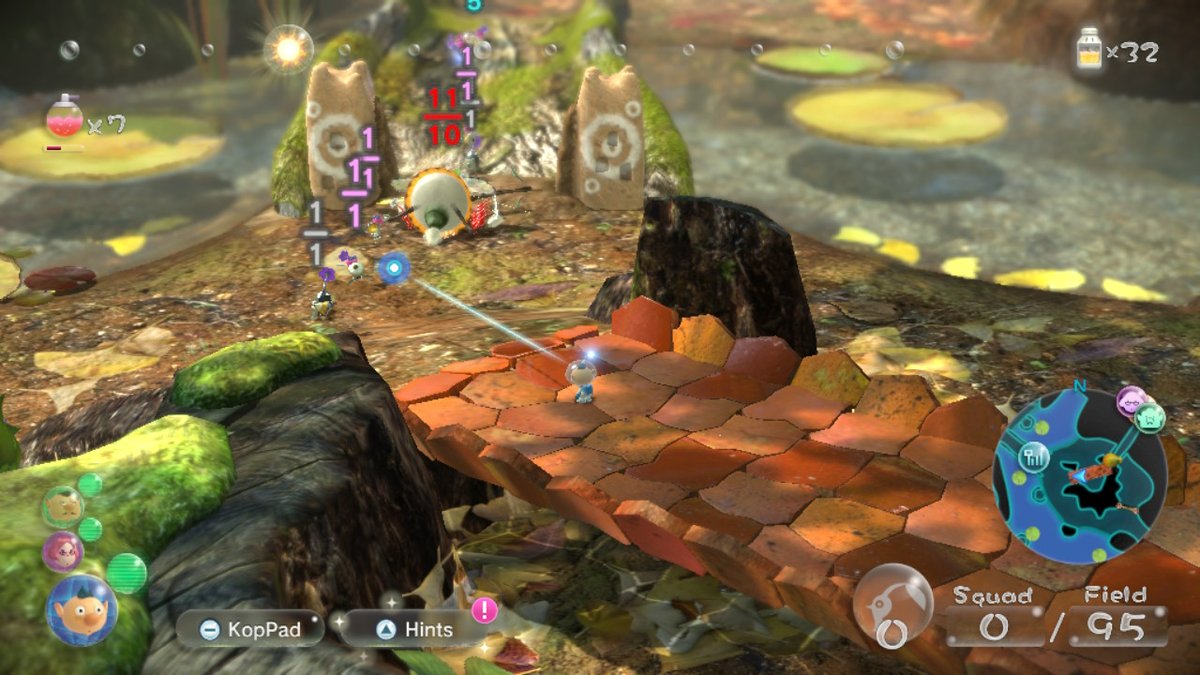 Managing Pikmin is  important, so analyzing enemies and how they seem to attack can determine life or death for the little guys. There’s no set time limit to complete objectives like the first Pikmin title, but instead the crew must have enough juice to keep themselves going. Juice is found by collecting fruit scattered out throughout the maps. The bigger the fruit the more juice is supplies, with the optional harder difficulties giving less juice for each fruit. Any roadblocks along the way will require certain kinds of Pikmin to get past, such as crystals or glass walls needing the heavy rock types to break them or blue ones to help explore underwater. More Pikmin are obtained through collecting enemy corpses or certain flowers with numbered buds to be brought back to their onion in order to create more. 100 max Pikmin can be out at once, so planning accordingly for each stage is important.

While the main story itself is short, there are tons of ways to still continue the Pikmin journey through a more challenging mode. Mission mode sounds simple and straightforward and for the most part it is, but offers the greatest difficulty most players will come across. These missions are different than the main story and have set timer limits on each challenge. The objective can be a variety of things from collecting treasures or defeating enemies. The goal is to get the highest score possible, being Platinum, but encourages players to attempt multiple times as each time they learn more about what they’re up against in their given time limit. This is when splitting up captains can be extremely important, as allowing the three to go in different directions lets tasks be finished sooner, but becomes about major management in watching the three to make sure they’re all doing okay without being attack by enemies. It’s a simple fun that even when doing just okay a first time will help lead to successes in each subsequent playthrough of it and is a big part of where time will be spent after the main story is beaten. 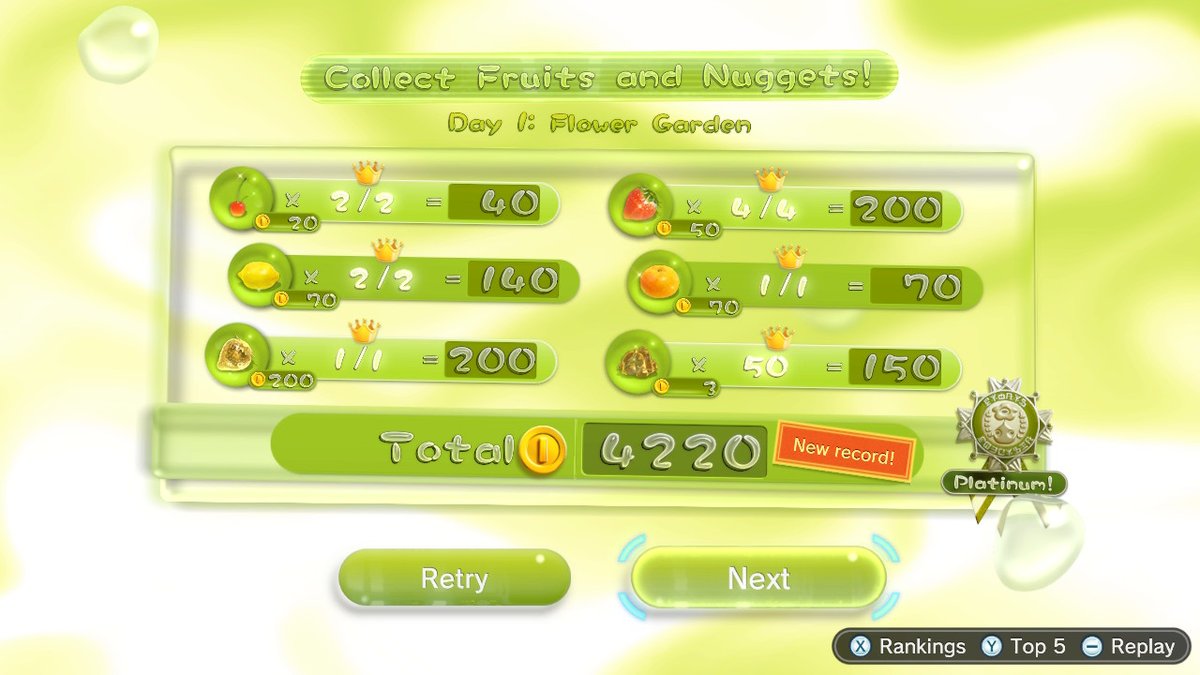 Although Pikmin 3 Deluxe is mainly a port, it does add a few new ways for players to enjoy their time. The first is the additional difficulty, Extra Spicy, which will have players working hard to ensure the life of their Pikmin in addition to their crew with less juice earned from fruit. There are also brand new side missions featuring Olimar and Louie which act like mission mode, but with bonus story that explains what they were up to before the events of Pikmin 3 began. There have been some control changes as well, with Gyro controls now being optional and the lock-on mechanic seeing a much needed change that no longer forces the camera to angle at whatever it locked on. From a simple gameplay perspective it’s hard to pinpoint why exactly this Deluxe version feels so much better than it did on Wii U, but there’s quality control fixes here that alone make it superior to the original.

Since the original release Pikmin has had an utterly charming art style that fuses both realistic backgrounds with adorably cartoonish characters and enemies. The realism to the world is what makes it so fun to explore as the obviously earth-inspired planet has so many familiar elements, while being completely and utterly alien on such a small scale that it’s played at. Each item is given its own unique name by the crewmates to funny turn outs which makes it fun to uncover them all. The soundtrack is light and charming while doing normal exploration leading to the feeling of mystery while going around every corner. Meanwhile the boss fights manage to ramp up the music with the feeling of terror one would feel while trying to keep their small companions alive and fighting at the same time. All together it makes for a beautiful experience melded together and if players are lucky they might even get to hear the cheery sounds of the Pikmin themselves singing together. 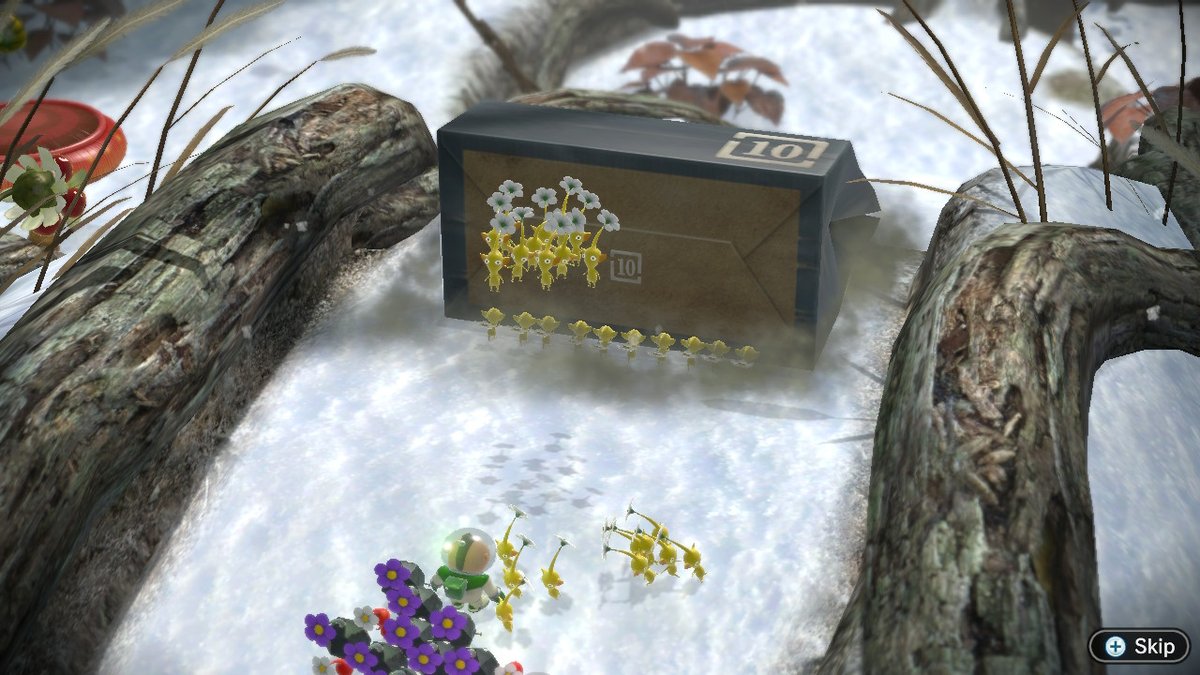 Of the many titles from Wii U that still need and deserve to be ported to Switch, Pikmin 3 Deluxe was a great choice to bring over. Pikmin has always been niche as far as Nintendo titles go, but it adds enough change to not only make it worth picking up again, but excellent for people to dive into for the first time. There isn’t anything else quite like Pikmin and its charm is matched only by its quirky unique gameplay and dialogue that creates a charming adventure in the wilds of a small world. It’s hard to say no to the big-eyed caring Pikmin that try their hardest to help the small adventurers do their best to escape the planet, and hopefully people will enjoy Pikmin 3 Deluxe for a first or second time on Switch.