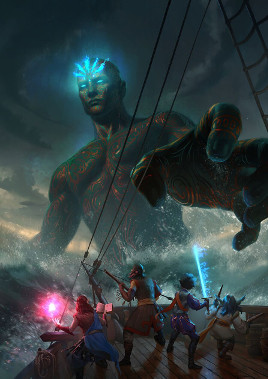 Whenever a great RPG announces a sequel, it’s natural to be filled with both excitement and apprehension. After investing anywhere from thirty to several hundred hours in a world with a group of characters, we form a sense of attachment and are curious about what future adventures await the crew to which we’ve gotten well acquainted. On the other hand, there have been some amazing RPGs in the past where the second installment failed to live up to the greatness of the original and we wonder if it would have been better to have remained a franchise of a single installment. This duality of emotions is only amplified when the original game had a story that was choice driven and the sequel is a direct continuation where player choices shape its world. All that being considered, Pillars of Eternity II: Deadfire has its work cut out for it after the high bar the original Pillars of Eternity set. Be advised that there may be some spoilers from the original Pillars of Eternity in this review.

Pillars of Eternity II: Deadfire is a direct sequel to the first game where the character will be reprising their role as the Watcher of Caed Nua. The god Eothas is dead, or at least that is what everyone seemed to believe at the conclusion of the previous game. The thing is that when you are the god of rebirth the rules of death don’t quite apply the same way they do with us common mortal folk, so Eothas has awakened with a giant body and has demolished the Watcher’s keep at Caed Nua, which is complete with some Monty Python inspired giant god feet smashing a poor peasant’s house. This is also used to introduce a new feature of the sequel which is the ship management sim. Since Caed Nua has been demolished by Eothas who is apparently cranky when he wakes up before he’s had his coffee, the Watcher now lives in a boat that needs to be staffed and the staff need to be taken care of.

Like some other notable RPGs, Pillars of Eternity II: Deadfire allows players the option to shape the world and the people in it by importing their completed save file from the first Pillars of Eternity. This is fine for people who have completed it on PC, but for those who skipped the original and want to jump into this one, or those who played the Complete Edition on console that came out last year, this option isn’t exactly viable. For those situations or for players who simply want to see what Eora would be like had they handled the first game differently, during the introduction and character creation there are some choices so the player can shape the world they live in. 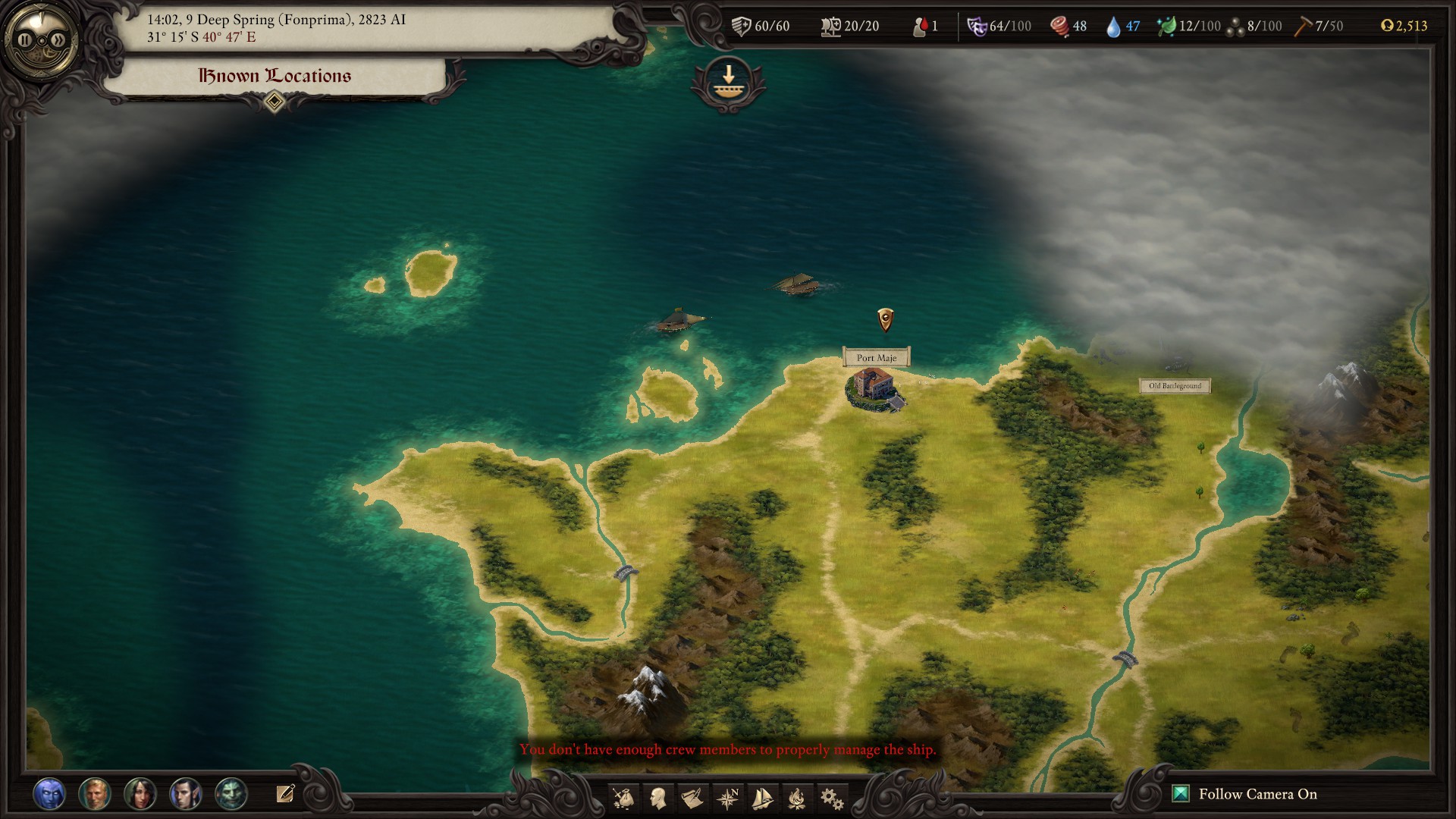 On that note of character creation, while not the most in-depth system ever devised, there’s no shortage of options for players to mess around with. There are six races, which include the common fantasy fare of Human, Elf and Dwarf, along with some races unique to Eora such as Godlike, Aumaua and Orlan. There are eleven base classes to choose from, which have the expected Paladin and Wizard along with some more unique choices like Chanter and Cipher. Dual classes are permitted but come at a cost. They gain levels slower than single class characters, and while the dual class allows characters to combine powerful traits of two classes, they’ll never attain the best abilities of either. Once we get the basic class and race decision made, it’s off to attributes, cultural background and weapon proficiency, making it so players can design a Watcher that is unique to them.

Attributes, such as strength, intellect and dexterity will factor into a character’s effectiveness in combat. Skills play a role how characters will be able to overcome combat situations. This could open up more options in a dialogue tree if the player has a high enough skill in diplomacy or intimidation, allowing them to either sweet talk their way into an outcome they want or make the person succumb to their demands through fear. Or if the player has a high enough stealth skill they could avoid combat entirely by sneaking around the enemy. There are a nearly infinite combination of different builds a player can come up with for their character, and should the player build their Watcher that ends up having an overlap with the skill set of future party members, the characters will give each other passive bonuses. Great care went into balancing this system where there are no “bad” builds, so the player is free to experiment and build a character based entirely on what they think will be most fun to play. 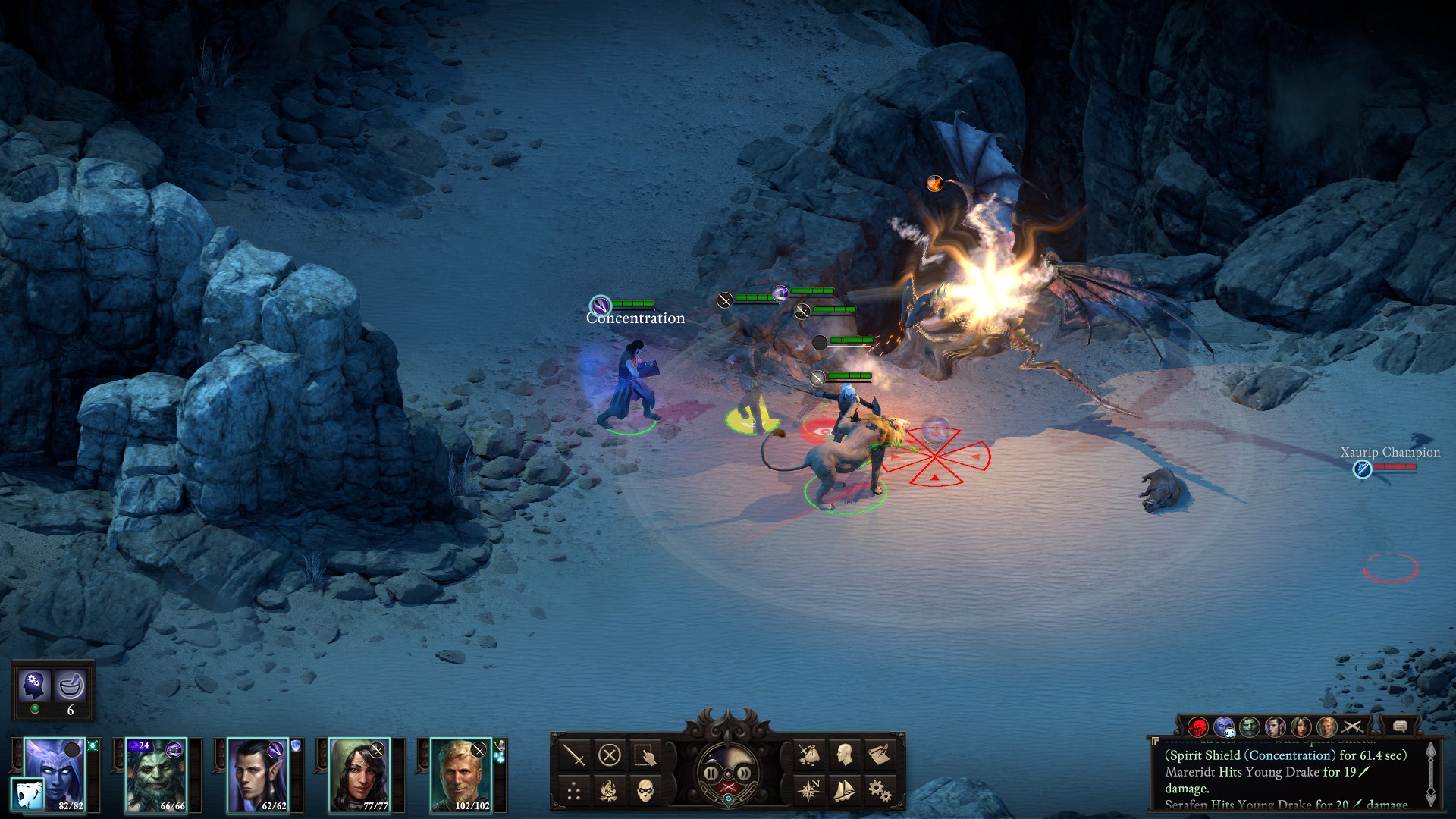 Getting into the actual gameplay, Pillars of Eternity II: Deadfire is an RPG that isn’t shy about displaying its tabletop influence. The overworld map has various points of interest and locations marked for players to explore. Some of these, such as dungeons or towns, will open up more detailed area maps to explore and engage in battle. Others will be a series of text descriptions and prompts, allowing valuable to be searched for with success based on attribute scores. Major characters or important events will have branching dialogue trees that will shape how the interaction plays out. One of the more noteworthy aspects of this feature is how entertaining and original so much of the dialogue happens to be, as I cannot recall another game that uses the phrase “squid tits.”

Picking a party requires a bit more strategy this time around since the number of characters allowed in the party at a given time has been reduced from six to five. Combat and other abilities, such as the ability to find traps or knowledge of the arcane will naturally factor into choosing party members, but in addition to that the Watcher will build relationships with the other characters who may form favorable or unpleasant opinions of the Watcher. The Watcher’s interactions with the other characters will influence the relationship stat, but so will the decisions the player makes while talking to NPCs. Like RPGs with branching skill trees before it, trying to please everyone in the party is surefire recipe for failure, though it can be fun trying to make everyone in the party despise the Watcher and their choices. 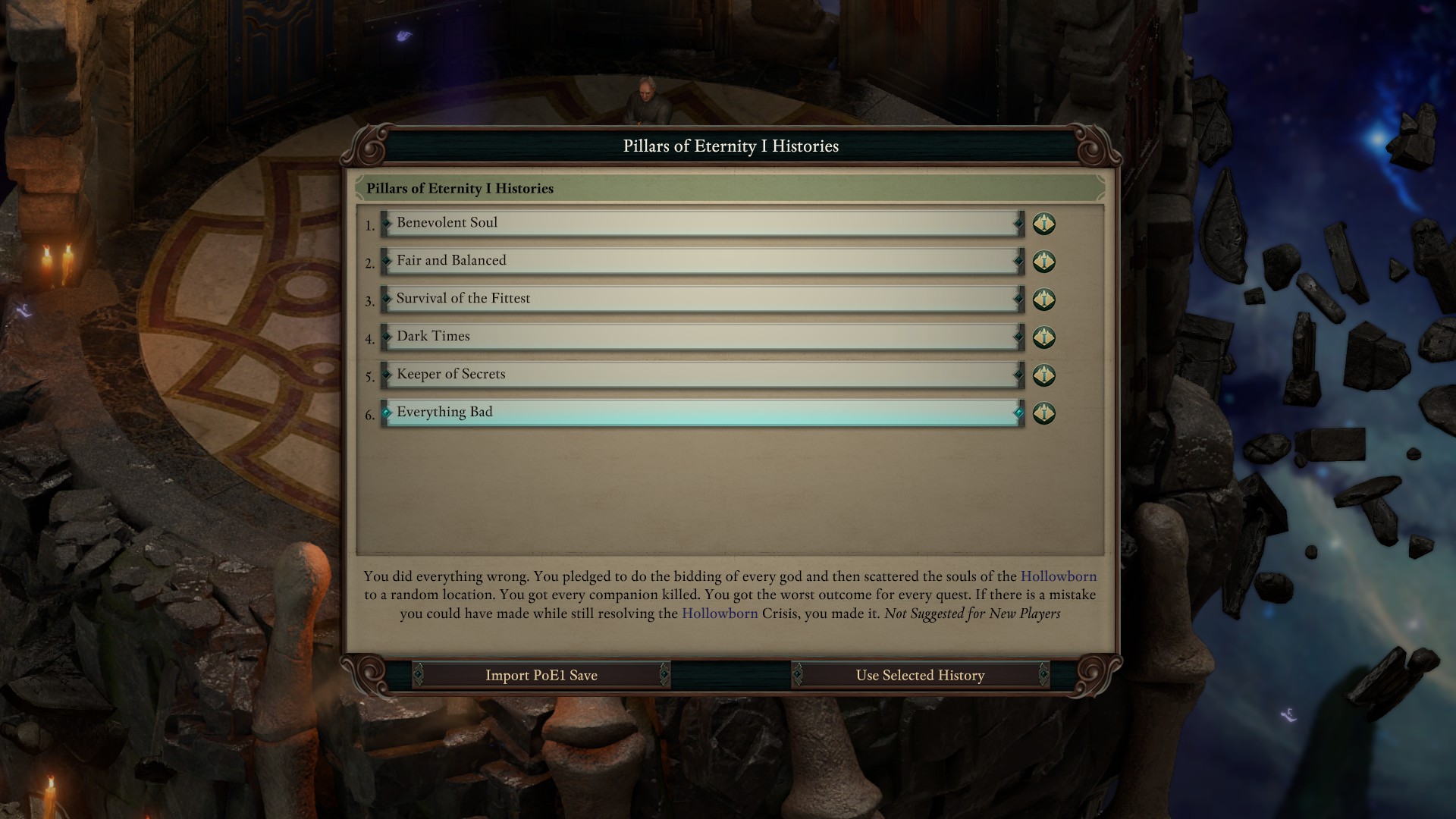 As mentioned earlier, a major change with the sequel is the ship management. The Watcher and their travel companions are given access to a boat early on and a crew is needed to run the ship, and money and supplies are needed to run the crew. As anyone with management experience knows, springing for higher quality food and drink will make the crew happier and more productive, but going overboard with that can put one in the hole in other areas. There are some key positions that need to be covered on the ship, which include boatswain, cannoneer, deckhand, navigator, cook, surgeon and helmsmen. The good thing is if the Watcher is having difficulty recruiting any of these key positions, crew members will become better at their assigned job the longer they stay with it. Assigning a random person to be the cook could result in excessive cases of sea sickness and possible mutiny, but this could also provide adequate training opportunities for the butcher turned surgeon. Sure, there may be a rough period where the crew members turn green from poorly-prepared food and the party member with the highest kill count is the person responsible for healing everyone, but over time they will be become world class chefs and physicians. Maybe.

Combat in Pillars of Eternity II: Deadfire varies quite a bit depending on the difficulty setting. On the easiest mode, the player can watch the AI take care of battles themselves with only the occasional need to get involved in the action. On the hardest setting the player will need to have a good working knowledge of each character’s abilities, strengths and weaknesses and be vigilant in issuing commands to each member and also have a strong strategic mind. Battles unfold in real time, and the player can pause the action at any point to assess the situation and issue commands or override party member AI. Battles are generally satisfying, as the game offers enough room for strategy and keeps the pace quick enough to be exciting, but the ability to pause and take control over everyone helps keep things from ever getting too overwhelming. A nice feature of combat is with the exception of injuries, party members’ health and resources are restored after battle so players can take full advantage and enjoy all their party members’ special abilities and not have to worry about conserving everything for major encounters. 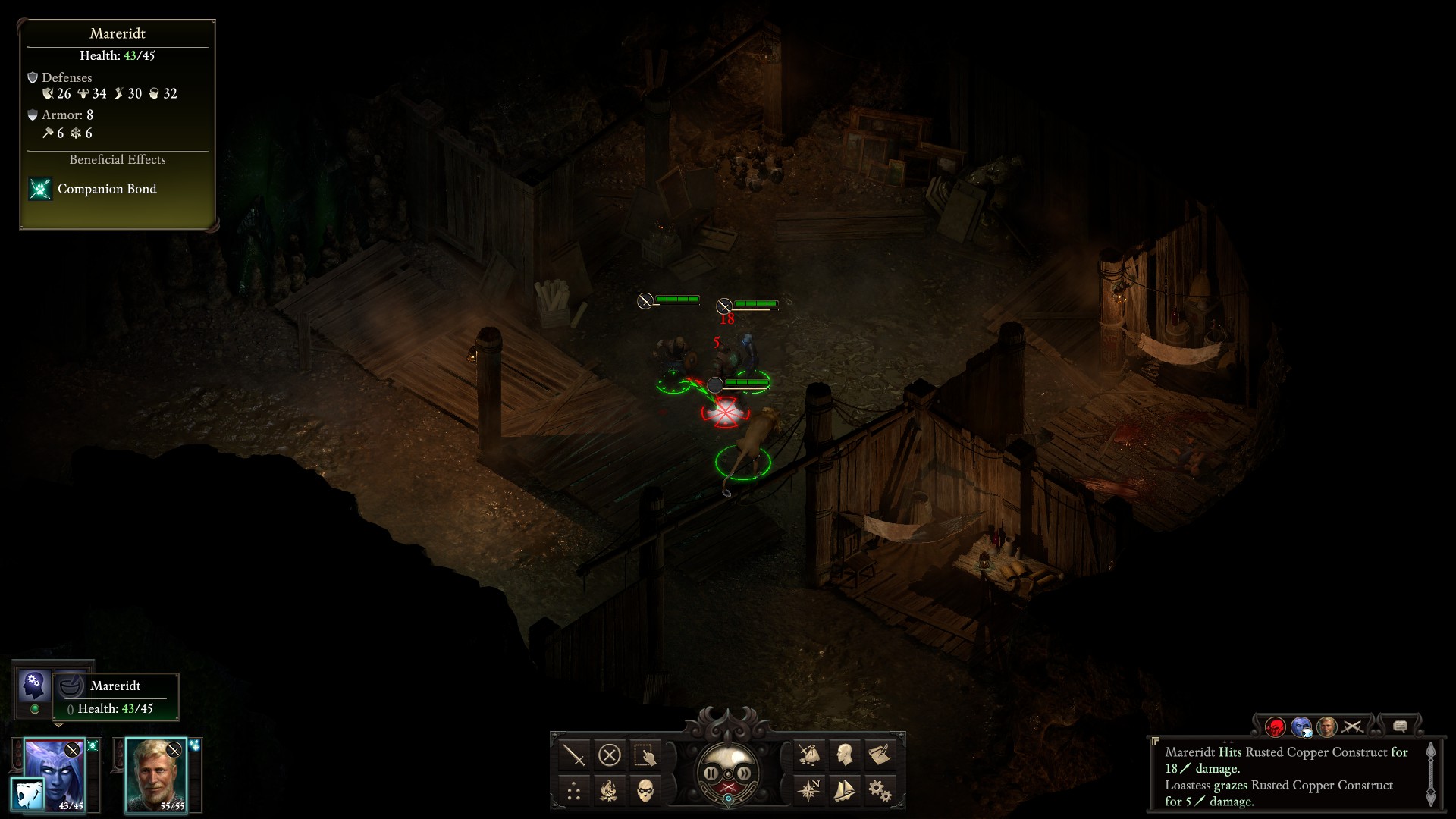 Traditional combat is a bit of a free for all, but ship combat is a turn-based affair. The player will issue commands that involve changing the boat’s position, firing cannons and retreating or ramming into the enemy ship. During this text-based combat the three stats to be concerned with are ammunition, hull health and sail health. If the sail health is depleted the actions of the boat are limited and the ship sinks if the hull health is depleted. Cannons take a few turns to reload and the ship has to be in the proper position to fire, so while ship combat looks simple in picking from several different actions, each turn can get strategic. There is also the option to ram the other ship which will damage the hulls of both ships. Should this occur and both ships survive, the battle will revert to the traditional format as the crews try to board the enemy ship. The only difference is this is the entire crew of both ships, so this can be a large-scale epic battle.

The world of Eora is vast and perfect for exploration. The narrative guides the player where they should go to advance the story, but it’s sometimes difficult to stay on task when there are so many opportunities to explore off the beaten path. The addition of the ship is likely to significantly increase the wanderlust of many as there are plenty of locations across the map to investigate. Exploring Eora is a joy thanks to the graphic quality improving over the original Pillars of Eternity, with a memorable score to accompany the journey. The soundtrack features approximately ninety minutes of fully-orchestrated music. This shouldn’t be too surprising for an RPG of this scope, but an additional treat of the soundtrack is thirty minutes of traditional sea shanties that have had their lyrics reworked to fit the world of Eora. 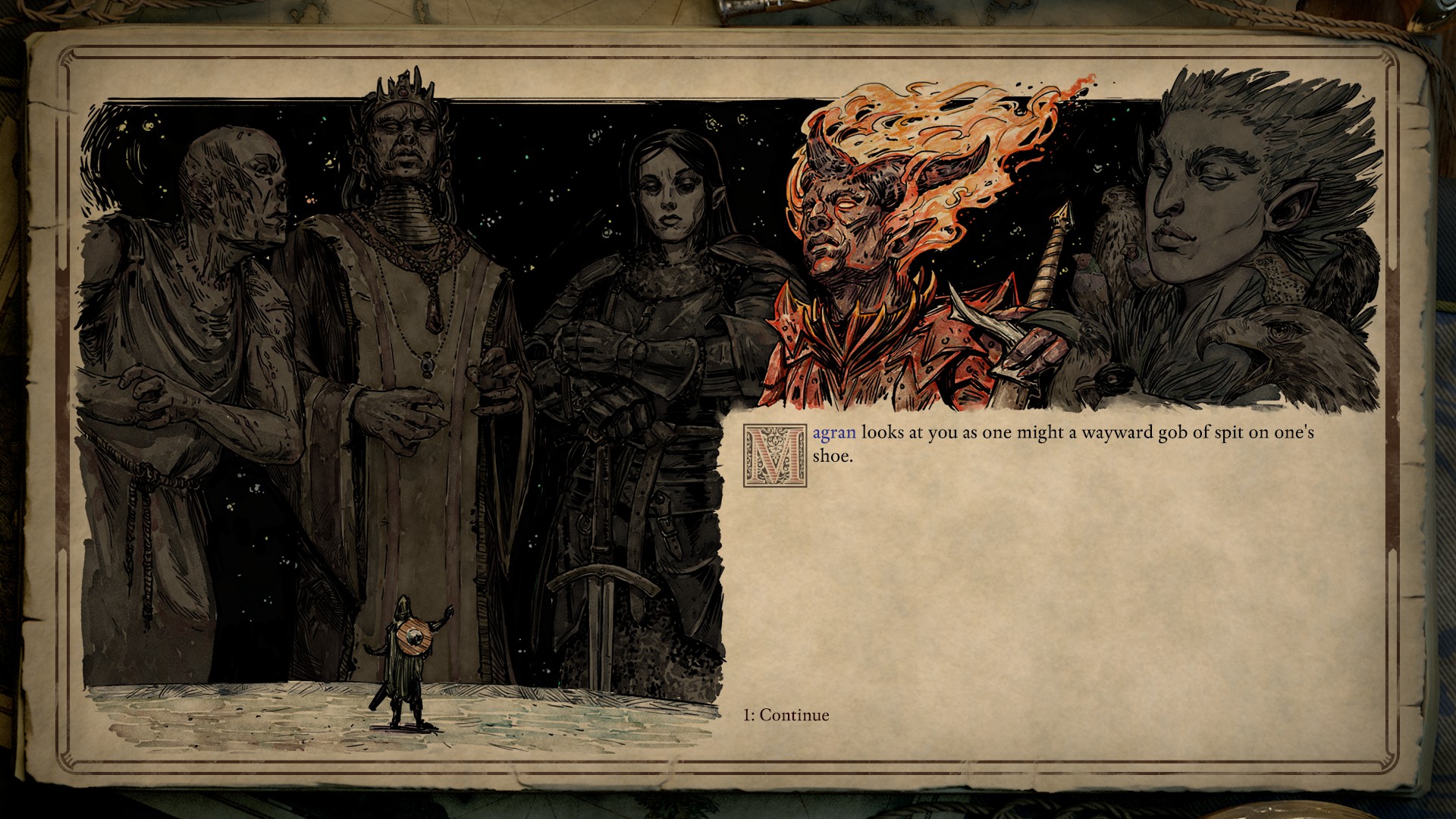 Pillars of Eternity II: Deadfire is a worthy successor to the original. It demands time from the player to fully understand the in-depth character growth and creation system, though doing so results in a rewarding gaming experience. Dialogue trees aren’t anything new, but this one features some of the more entertaining dialogue among recent games and the voice acting with the script makes the inhabitants of Eora feel alive. The influence of tabletop role playing and classic RPGs come together nicely in a vast adventure where player choices matter. And for a game that will take thirty to forty hours for non-completionists with three scheduled DLC expansions, keeping the game interesting is extremely important, which thankfully Pillars of Eternity II: Deadfire has no problem doing.