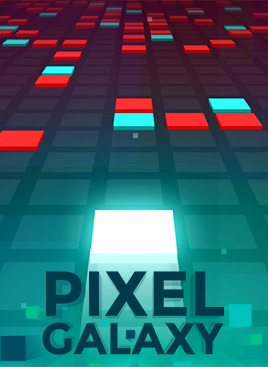 It’s hard to be a single pixel, all alone in a large and dangerous world. One little square can’t do much of anything, except maybe attract others to join it. Many pixels together are much more capable, with the downside being that they make a bigger target, but seeing as each brings its own unique talent to the cluster of the whole they just might survive the bullet-infested nightmare of Pixel Galaxy.

Pixel Galaxy is a bullet-hell game about dodging and growing, with every enemy block you touch being added to the mass and every bullet trimming one off.  Each block retains its shot pattern when you get it, except now it’s working for you instead of against, and it fires automatically for as long as you can keep it.  Depending on the level that may not be very long, but it’s nice while it lasts.  The easier difficulties can see you build a ship that takes up massive chunk of the screen, spewing bullet patterns from its every surface, but once you get to Normal and harder the focus changes to survival, if you can manage it.

Every enemy is a square, the same size as you, and most of them have a bullet pattern to call their own.  Some fire in a straight line, others shoot out spinning bullet-swords or pincers, or have a few bullets in orbit around them, or let loose a fan of firepower, or even mine the area around them with homing bullet-clusters.  The trick is to figure out their patterns and learn to sneak by, touching them without being hit to add their ability to your growing  chaotic mass.  Most of the pixel enemies you grab won’t do much of anything other than add mass and another single-hit layer of protection between the central glowing white “you” pixel and the bullet-soaked screen, but once you’ve got a few shooters attached the focus switches from dodging to thinning out the herd while protecting offense at all costs.  It’s always fun to have throw a little bullet-hell back where it came from, but sheer density of enemy firepower means that very few pieces of the ship hang around for long. 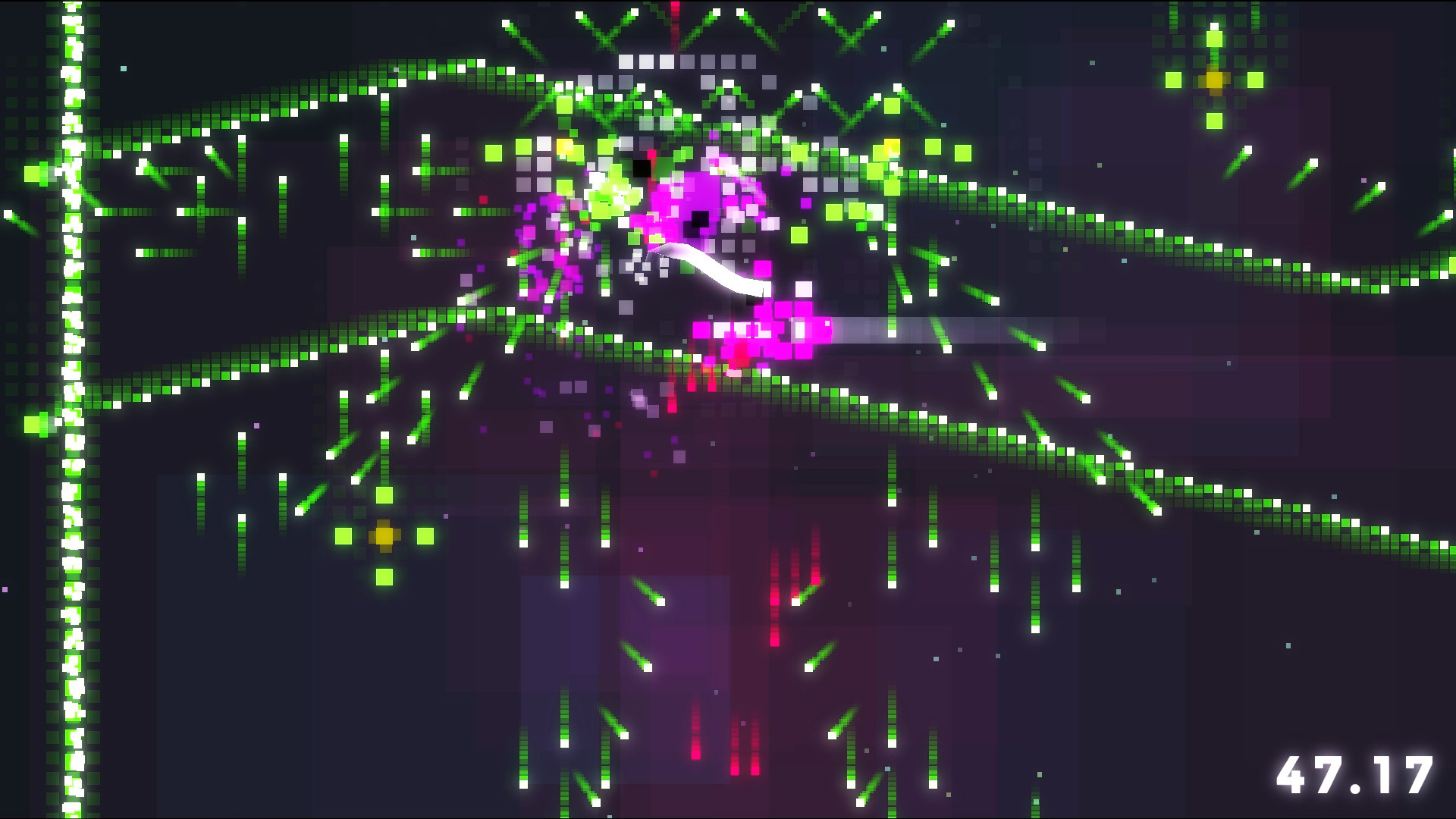 The main game is divided into six difficulty levels, with each one having its own pool of increasingly-difficult enemies and creative bosses to pull from.  Each level throws 100 seconds of themed enemy waves pulled randomly from a pre-built selection before a boss appears, and you’ll need to build as strong a cluster as possible to succeed.  On the down side, harder enemies are trickier to grab on to without getting annihilated, but once you’ve got a couple they can do nice things for your offense.  Everything has a pattern, but it can take a while to figure it out.  Some enemies you’ll need to chase after or approach from the side, and there’s even a class that’s best dealt with by picking a spot and standing still.  Death can happen very quickly, seeing as you just need to lose the original starting pixel, and with the mass of firepower eventually cluttering the screen it’s very easy to see a giant ship turn into a couple of blocks holding on for dear life.

It’s even easier to die, though, and while a nice challenge is always welcome, Pixel Galaxy tends to venture into cheap-death territory a little too often.  Once you get to the Normal difficulty, all bets are off, and the screen is just as likely to become an impenetrable maze of bullet-death as it is a decent challenge.  Several waves are designed around you having a nice buffer of pixels around the core unit, and if you don’t have one then the odds of survival drop to something a little over zero, but not by much.  Chased a pixel to the edge of the screen only to have the next wave show up with instant-kill firepower ripping through all your defenses?  Knocked down to two pixels and trying desperately to recover, only to have the screen zoned off as erratically-flying, bullet-radiating swarms come through?  Restarting is a single button press but after a while the overwhelming level of defeat becomes a little much.  Shooters are supposed to be a challenge, of course, but many attack patterns don’t seem like there’s any chance at all to recover if you start off on the wrong foot, and seeing as you don’t know what you’re going to get until it shows up there’s no way to be ready except for hoping really hard.  Technically every pattern in the game can be cleared with just the single starting pixel, and there’s a Pacifist mode built around this, but it’s the kind of challenge only the most obsessive would chase after. 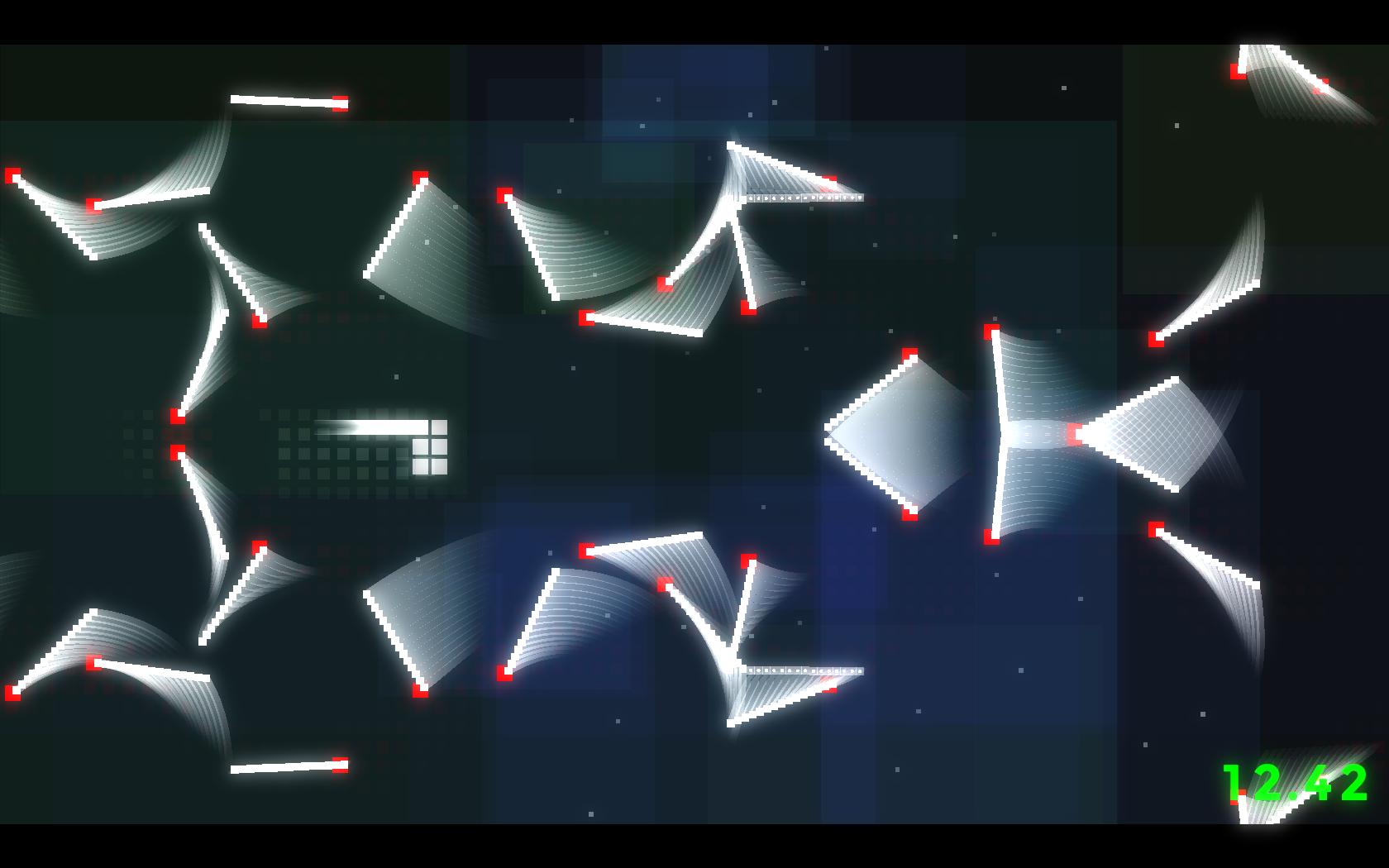 Pixel Galaxy is a clever little non-shooter where your only ability is to move and convert enemies into helpers, and as simple as the endless squares that make up its art are, they look great in motion.  There are a lot of creative weapons and bullet patterns to dodge through, and constant tug-of-war with the enemy swarms is a lot of fun until it becomes a constant beatdown.  The bosses in particular are creative and the Colosseum mode where you fight them starting with only a single starting pixel is one of the best parts of the game.  There’s a lot to like in Pixel Galaxy, and a really great game buried under its layers of difficulty.  The shooter genre isn’t supposed to be an easy one, but after a while I just wanted Pixel Galaxy to stop killing me for a few seconds.