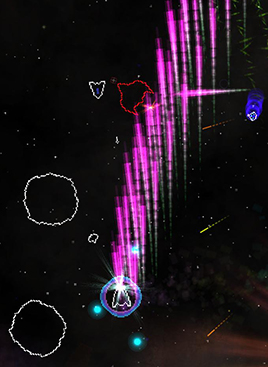 Some days it’s nice not to think. All I want to do is move fast, shoot fast and dodge like crazy. There’s plenty of time to construct giant empires, plan cities, create intricate devices, or memorize and perfect a perfect combo run in other games, but simple has its place too. Pixel Star is a straightforward arcade game about shooting, dodging, and infinite powerup progression, and a perfect break when all you want is a few moments to shoot a whole lot of space baddies before they shoot you.

You start off in the middle of the screen, little more than a simple white outline of a spaceship. It’s got a single laser shot, a secondary ability with a cooldown time, and more powerful gun that uses limited ammo. The ship controls twin-stick style, although you need to hold down the trigger to fire, and just about every feature of it can be upgraded. Not visually, of course, because Pixel Star saves its pyrotechnics for massive laser firepower and weapon effects, but shot power and rate, number of lasers per shot, shields, weapon ammo, turbo thrust, and much more may all be dropped as you blast through the infinitely-scrolling starscape. The weapon effects stack, too, so the little pew-pew laser you start with can become a giant colorful multi-laser stream of unstoppable photon death.

Or at least practically unstoppable.  While enemies are quite happy to appear in ones and twos early on, with the frequent asteroid drifting by to be cracked open for potential powerups, they start swarming fast once the first boss is dispatched.  Pixel Star has four unique bosses that appear in random order, incredibly deadly the first few times you meet them and still troublesome with experience if you’re looking to hold on to the score multiplier.  A single hit from a regular enemy may only take out the shield temporarily, but most boss hits counts as actual damage and can easily drop an x20 multiplier right back to x1.  Regular enemies can pierce the shield as well, of course, but seeing as there’s a regenerating single-shot buffer between you and them the multiplier has a better chance of long-term survival. 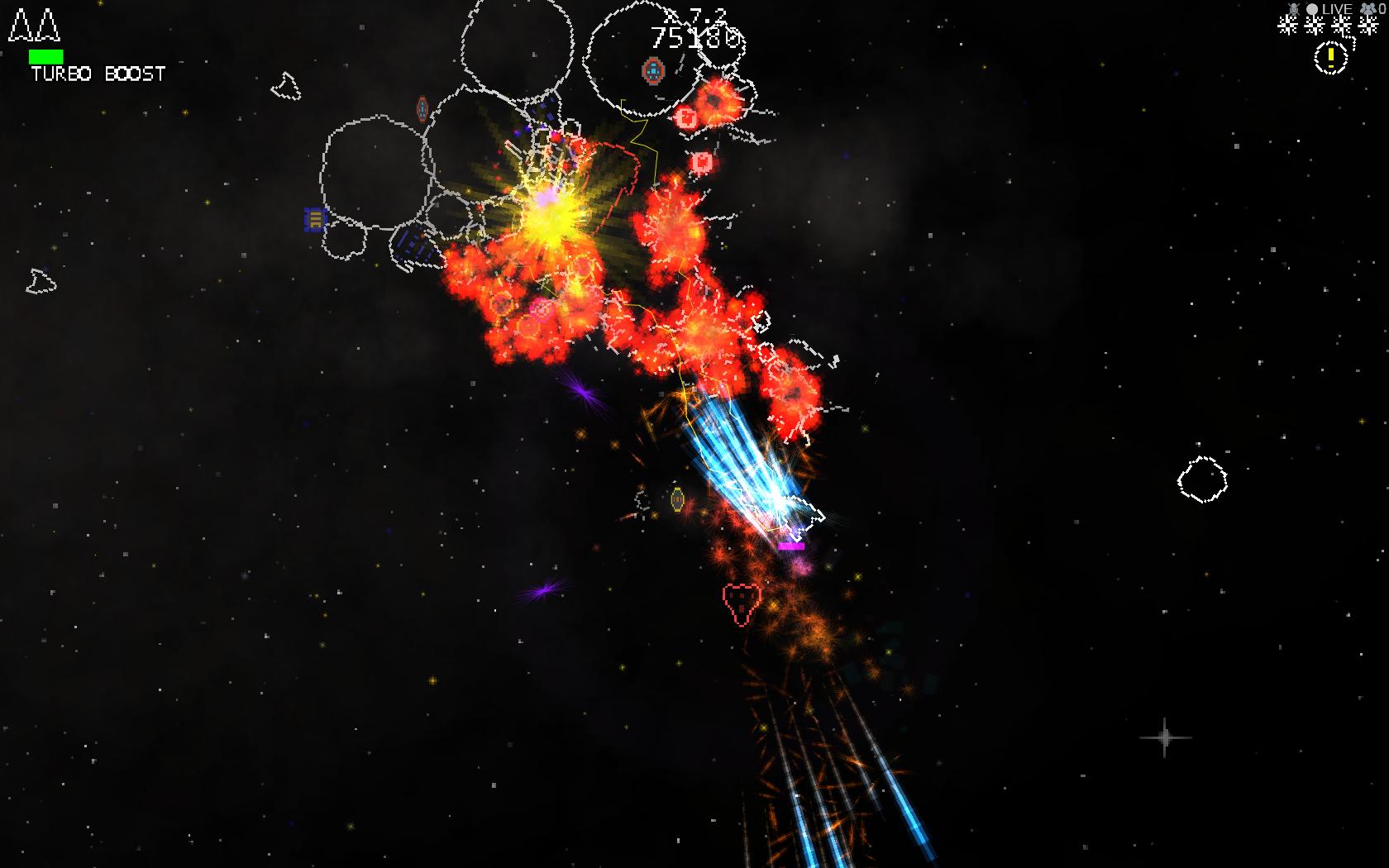 Not a great chance, mind you, because Pixel Star rapidly packs the screen with a wide variety of enemy ships.  Little arrow-ships fire single laser shots, bigger ships shoot a wider spread, spinny-satellites emit an aura that cancels the shield and slows you down, and space blimps (video game logic says “Hi!”) shoot odd circling homing shots.  Even interstellar caterpillars drop homing missiles as you shoot off their body segments.  Space is dangerous, and if you weren’t insanely powerful you wouldn’t stand a chance.

Even at the start, when all you’ve got is a single laser, the ship is nicely powerful if you exploit the secondary weapons.  At the title screen the Ship option accesses the loadout, allowing you to choose one of three passive Hull abilities, six auto-recharging Utilities, and another six limited-use Secondary weapons.  The Hull abilities are nice enough, giving you a small advantage, but depending on how you combine the Utilities and Secondaries, you can get very overpowered very quickly.  Whether this is a bad thing or not is down to whether your personal play style demands exploiting every advantage or experimenting for the fun of seeing what weird combinations you can come up with. 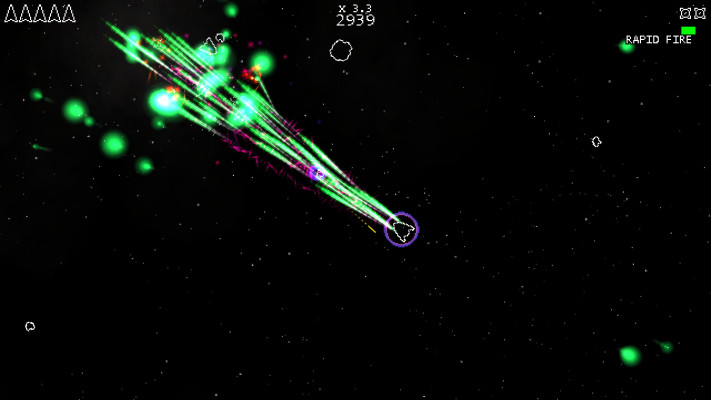 Liquid Plasma, which stops any enemy who comes in contact with it, combined with Timed Bombs, which have a nice area effect after a short countdown, is nowhere near as effective as the Magnet (draws in all asteroids and enemies) and Static Electricity (fan of  very powerful lightning) but it is more fun to use.  The advantage of the latter combo is that the magnet puts a ton of enemies in a small space and the lightning toasts them all in a single shot, with good odds of a number of powerups being left behind and likely at least one restocking the secondary weapon.  It doesn’t take more than a couple of times doing this to get a nice laser spread shooting at rapid pace, a pair of sparkly barrage shots accompanying it, a few AI drones, and an orbiting spark or two.  It’s actually possible to get strong enough, at least on Normal difficulty, to completely overwhelm all enemies and play as long as you like.  After I got good at Pixel Star I had to use another Utility/Secondary combo to make the game interesting again, although on Hyper or Mad difficulty levels the enemies are still capable of cutting me to pieces even with the exploit.

The other problem Pixel Star has is one of visibility, in that the most common type of enemy shot could stand to be brighter.  The thin yellow-orange lasers that are the standard enemy shot tend to get lost amidst the much brighter firepower you’re throwing back, especially when the smoke from disintegrated asteroids and enemies gets thick on the screen.  This isn’t an issue with some other types of firepower, such as the bright yellow and blue homing shots, but guided missiles are the same white color as enemies and the background stars but smaller, so more easily missed against the visual chaos shaking the screen. 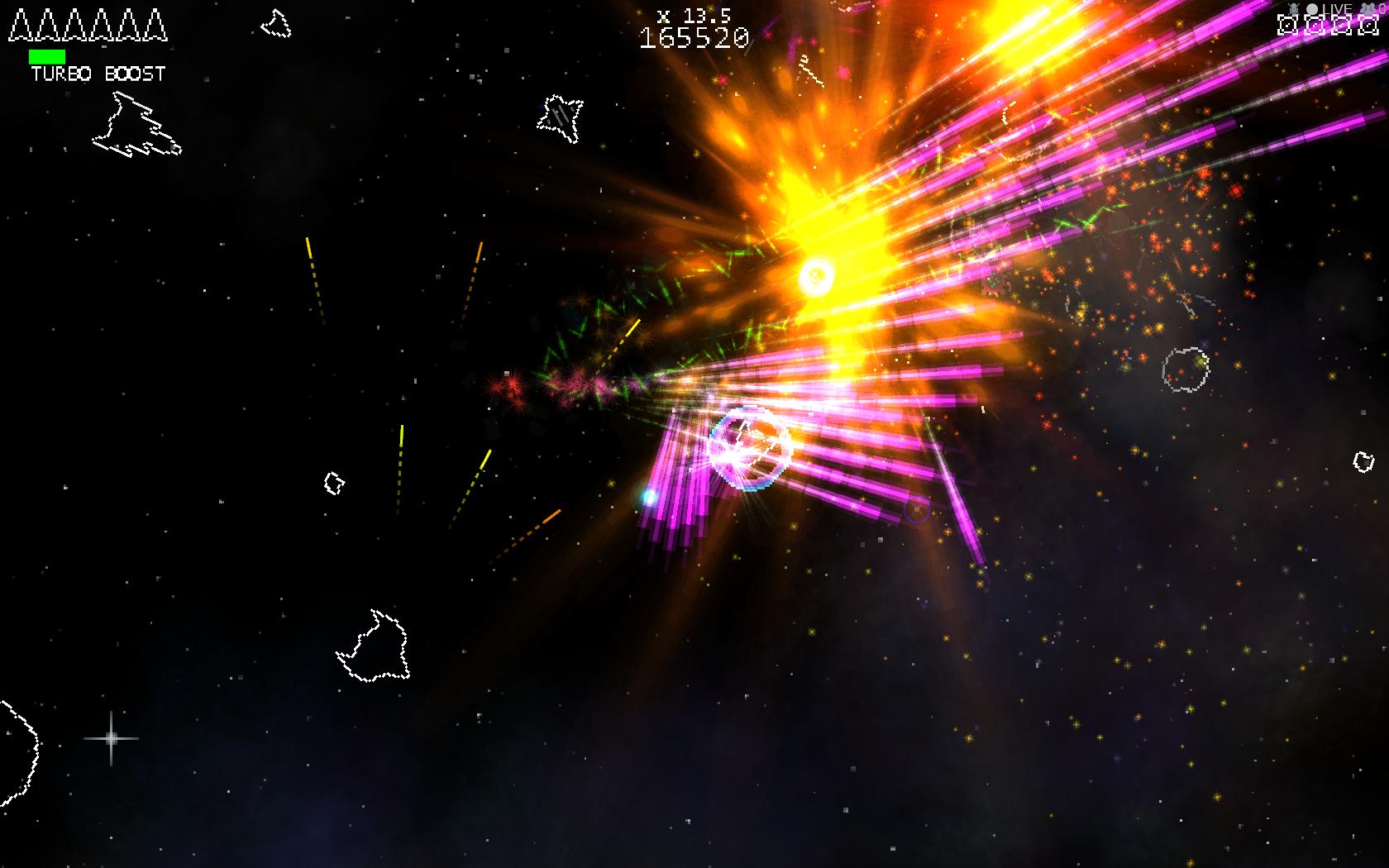 While Pixel Star has its issues, it also has a fantastic feeling of playability.  The ship is a zippy little thing, capable of fast and nimble maneuvers but also flailing into trouble if you aren’t careful of controlling its speed.  Different events, such as bounties, rescues and cargo, pop up now and then to give you something to chase after other than the next explosion, and the occasional star or black hole keeps space from being an endless featureless expanse.  The enemies come in a large number of shapes and sizes with a nice mix of attacks, and they attack in swarms that are always great fun to slice through.  Pixel Star is a pure arcade game about wielding ridiculous amounts of firepower against an overwhelming force while flying at high speed, and while nobody is ever going to accuse it of being deep, there’s no question it’s great shooty fun.