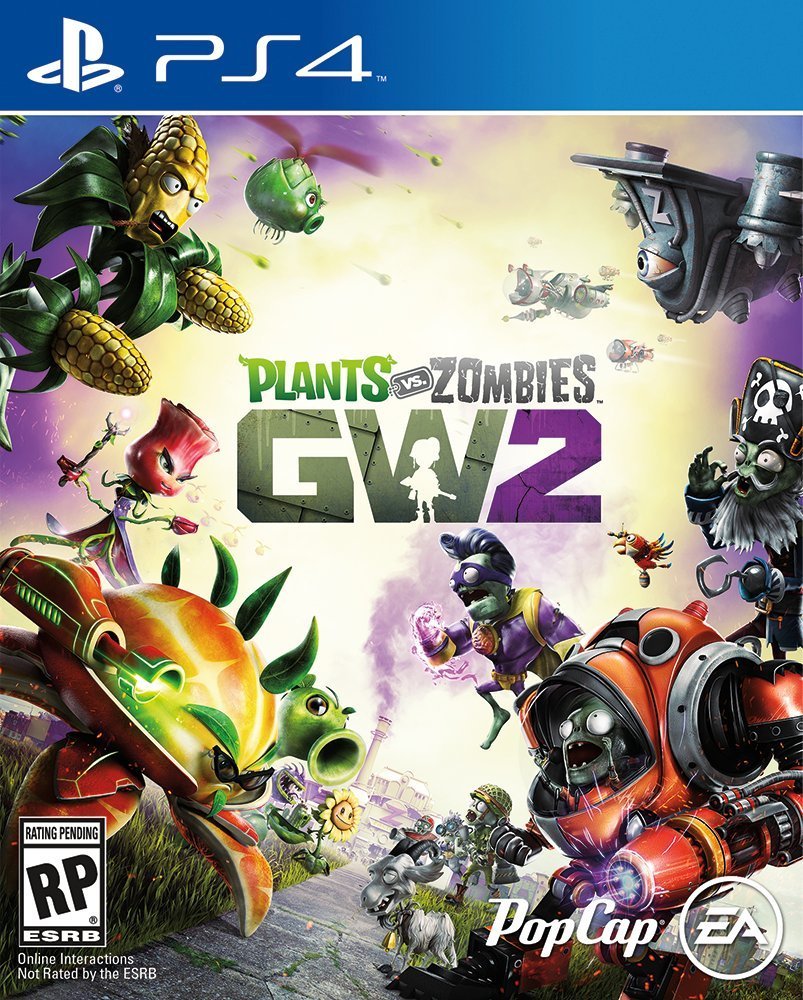 Plants vs. Zombies: Garden Warfare 2 makes amends for its predecessor almost immediately from the get go. Abandoning the menus of Garden Warfare, Garden Warfare 2 dumps players into the Backyard Battleground, an open hub-world. From the Backyard, players are able to pursue quests, customize characters, hop into multiplayer matches, participate in single player activities, or explore Suburbia/Zomburbia. There’s a lot to see in the open world, and plenty of dynamic battles to engage in, making it a huge step-up from the menu-laden original. Garden Warfare 2 introduces a solo mode for players who would rather go it alone, though it isn’t much. PopCap has introduced a campaign for both the Plants and Zombies, but they’re extremely short and there’s nothing deep. As the Plants you’ll mainly fight to repel the Zombies, and as the Zombies you’ll look for ways to destroy the Plants. There are some “crazy settings” to tinker with and co-op player is available in solo mode, but there’s not a whole lot of depth or long-lasting appeal here. It’s nice that PopCap Games included solo content, but it’s clear that the focus of Garden Warfare 2 is on other modes.

Where Garden Warfare lacked in content, Garden Warfare 2 gladly makes up for it. In addition to the four Plants and four Zombies from the first game, Garden Warfare 2 introduces three new classes per side. The plants get Citron, a citrus capable of firing lasers, deploying a personal shield and transforming into a ball for greater mobility; Rose, a mystic capable of casting spells and turning Zombies into goats; and Kernel Corn whose cob blasters, shuck shot and butter barrage make him a frontline fighter. 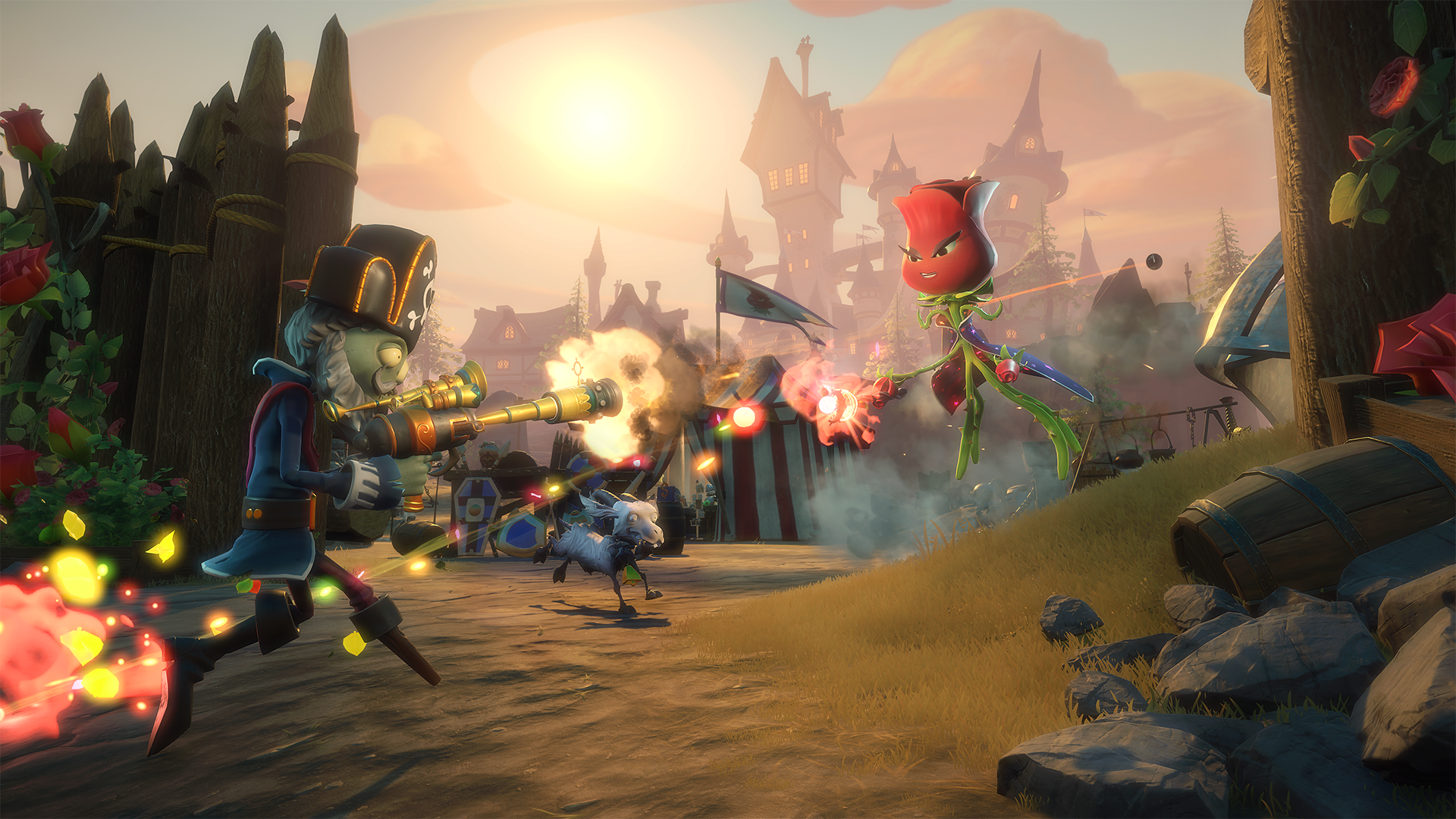 The Zombies get Imp, a devilish little creature who dual-wields pistols and can summon a powerful Z-Mech; Super Brainz, a super hero capable of punching, firing lasers and performing acts of super-zombie strength; and Captain Deadbeard, a one-legged pirate capable of switching between close and long-range attacks. All six new characters are fun to play and mix well with the eight returning classes. Most importantly, they all feel balanced. For example, the Imp’s Z-Mech may be extremely powerful, but Imp is weak by himself. Citron may take a lot of damage, but his Orange Beam doesn’t do a whole lot of damage and can overheat. 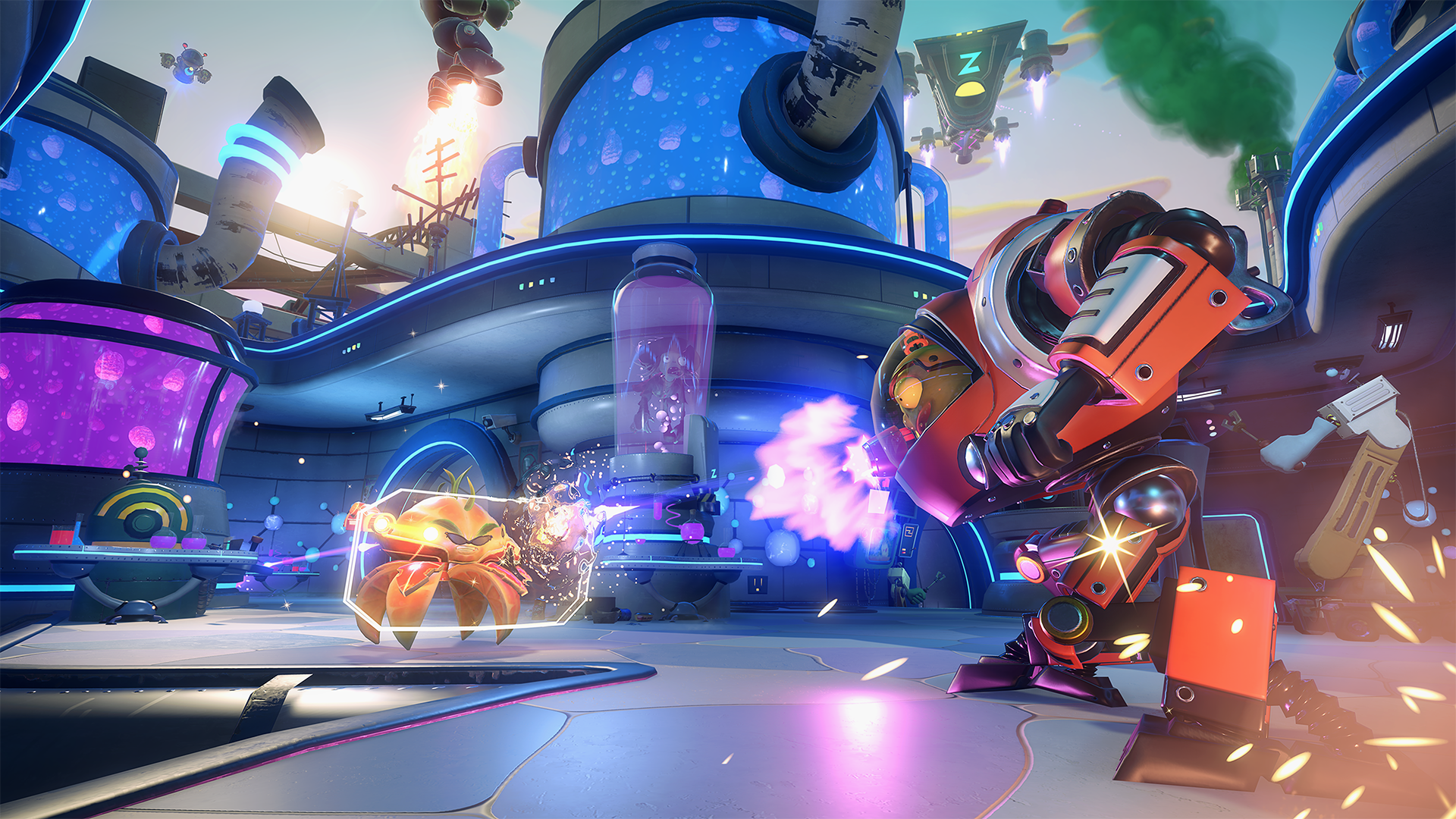 Like the original Garden Warfare, co-op and multiplayer is where Garden Warfare 2 shines. Garden Ops, Garden Warfare’s take on Gears of War’s Horde Mode, returns with all-new minions, bosses, and heroes to battle. On the flip-side, Garden Warfare 2 introduces Graveyard Ops, the Zombies version of Garden Ops. These are fun game modes, and are best played with friends.

The real meat and potatoes of Garden Warfare 2 is the multiplayer, which is just as crazy and chaotic as the original game. There are a total of twelve maps, each themed after a distinct period in time. You’ll battle it out in a Roman Coliseum, lay siege to a castle and even run through the land of dinosaurs. All the maps are visually diverse, but are equally well designed. Each map is designed so that all fourteen characters can be used without a player compromising their favorite playstyle.

In terms of game modes, Garden Warfare 2 brings back almost every single mode. Team Vanquish (Team Deathmatch) Vanquish Confirmed, and Gnome Bomb all return. There’s even a nice ‘Welcome Mat’ mode designed to ease in those unfamiliar with multiplayer shooters. The sole new addition is Turf Takeover, a cross between Gardens & Graveyards and Herbal Assault. Plants and Zombies will rotate between attack and defense where the enemy team attempts to capture and control key areas of the map. It’s a fun new mode that depends heavily on teamwork and using the different characters’ special abilities to create a winning combination. 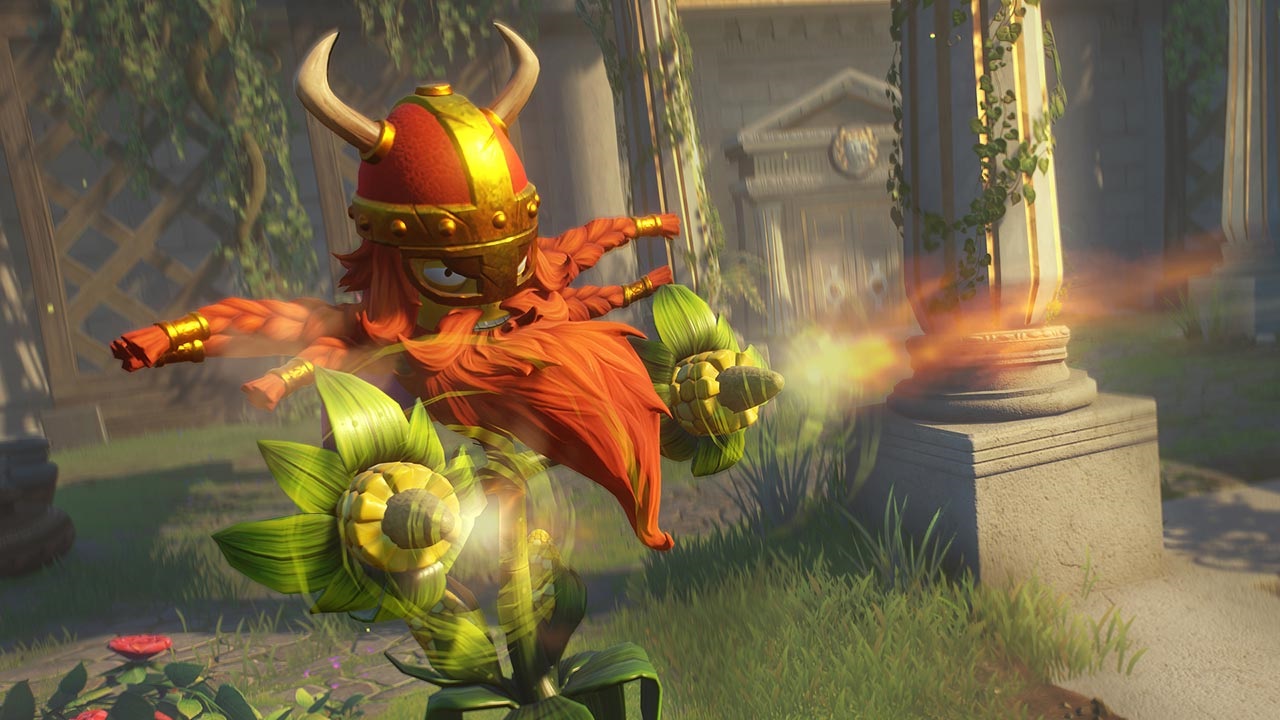 The entire Plants vs. Zombies: Garden Warfare 2 experience is tied together through progression and coins. Everything you do in the game will net your characters experience, which can then be used to promote the character and earn new customization options. Each character has its own experience bar, encouraging players to frequently switch between them. Coins are used to unlock Sticker Packs that contain Plants and Bots and special character variants. Unfortunately, this is the only way to get some of the character variants, and these can cost quite a bit of coins. At this point, Plants vs. Zombies: Garden Warfare 2 does not have a microtransation system, but it’s easy to see PopCap adding them in down the line, especially since the original Garden Warfare did have microtransactions.

PopCap have done an excellent job adding in a ton of new content, but have not learned their online-only lesson. Yes, Plants vs. Zombies: Garden Warfare 2 must always be connected EA’s servers, even if you want to play the single player content. EA games have had troubles in the past, and the current situation makes it difficult to jump in and start playing.

From a presentation perspective, Plants vs. Zombies: Garden Warfare 2 looks and sounds fine, but won’t blow anyone away. The game looks nearly identical to its predecessor, with what looks like models and textures ported over. The new characters and maps, however, look quite good and sporting some fancy effects work. Garden Warfare 2 also uses a more colorful color pallet then other multiplayer shooters. The Plants are bright and colorful, and the Zombies are muted and purple. 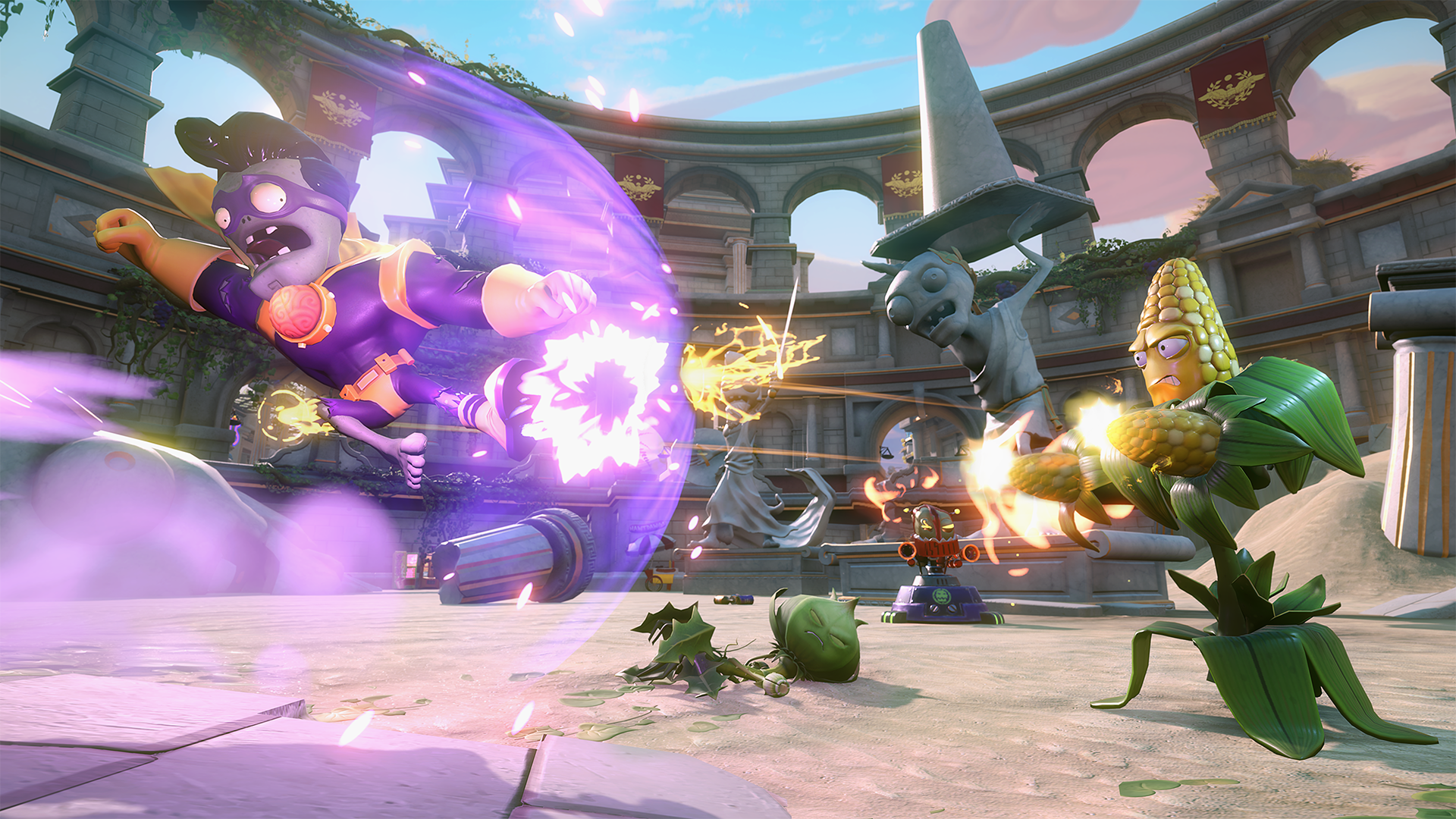