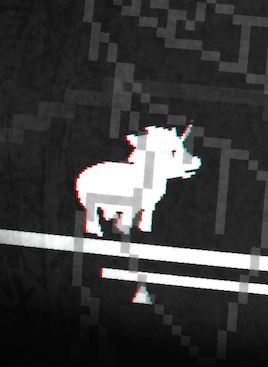 Jokes aside, Pony Island begins much like this review did; a seemingly normal and bland iteration of a much repeated formula, all the while hinting at something that is just slightly…off. This slightness doesn’t last long, however, with the general theme and tone quickly becoming a lot disturbing, as well as utterly entertaining.

You see, Pony Island is most certainly not suitable for all ages. Neither is it an ordinary game about a Pony jumping gates. Well, it kind of is. Not really though.  Sorry, Pony Island is a hard game to describe. Especially without giving away anything that could possibly lessen the reader’s surprise and potential enjoyment. I’ll try though. You play as someone playing the game. Although this distinction is a blurry one, as sometimes the game breaks the fourth wall.  Then, sometimes it doesn’t.  Then, sometimes it might be, but you aren’t really sure.  It’s all very confusing. Anyway, you are someone that is playing a game. Probably. 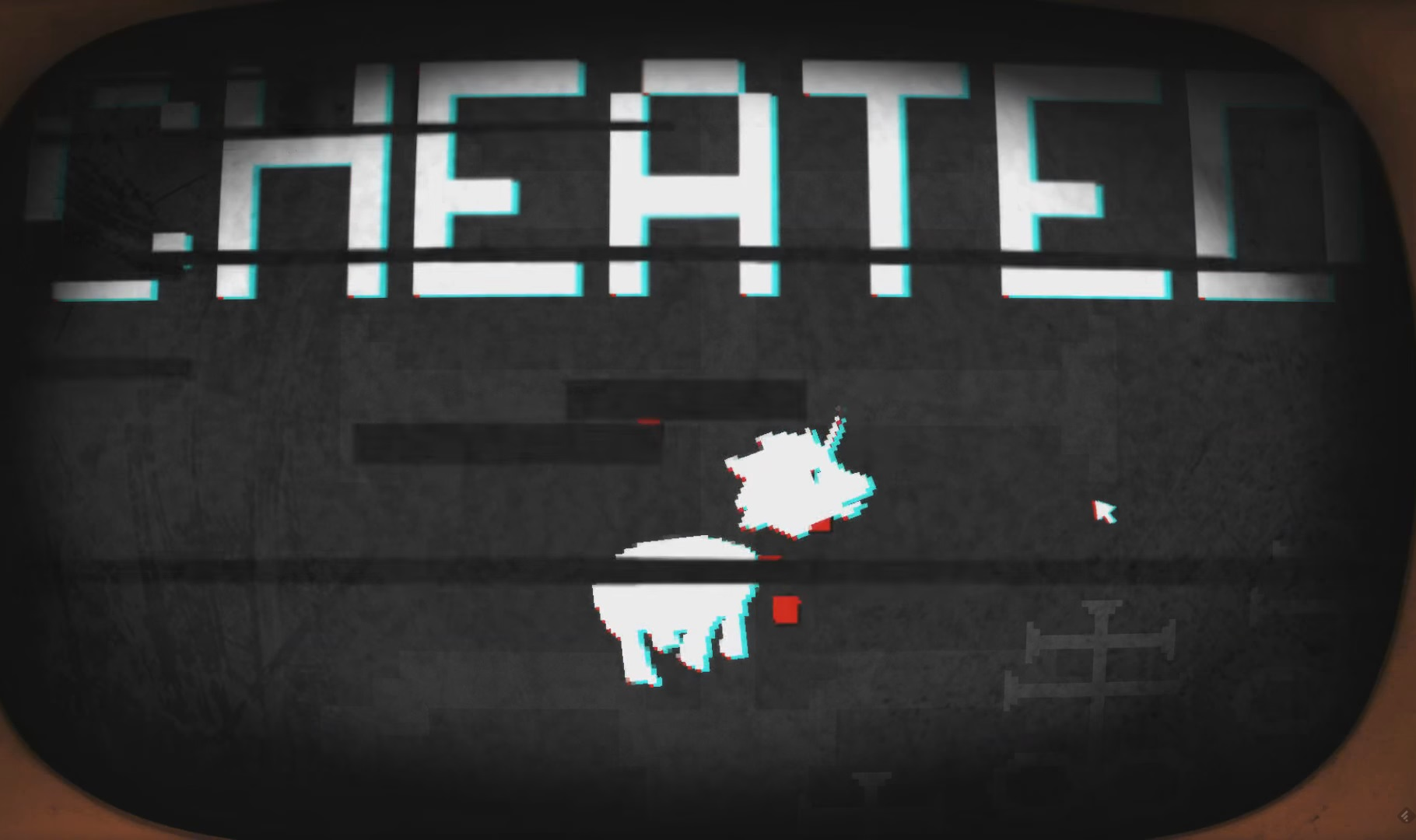 The ultimate aim of Pony Island is to complete the game. Yes, that is generally the aim of most games I know but Pony Island approaches this differently. Simulating the player interacting with the developer in real time, the game requires you to cheat in order to overcome the Dev’s spiteful attempts at halting your progress.  And boy is he spiteful.  Along with trying to stop you from completing the game, there is a minor issue of him trying to collect your soul.  Whether it be via in-app purchasing, or blatant trickery, the Dev definitely wants some of your sweet, sweet being.  Rather, he wants your character’s soul.  Or maybe… *Checks Soul* Okay, yes, it’s the character’s soul.  Probably.

Honestly, it feels like revealing more of the plot would be a disservice to anyone who is interested in playing the game; so enough of that.

Pony Island is composed of two parts. The façade and the interactions with the game’s inner workings and developer. These parts often overlap and are completely dependent on one another in excellent fusion.  In the façade, the player controls a pony that is jumping gates and avoiding enemies.  While this does become slightly more varied as the game progresses, this is the meat of the façade and any additions are simple expansions of this basic concept.  The remaining parts of the game —where the majority of time is spent— is composed of puzzles to solve.

This puzzles usually take the form of the game’s version of hacking.  A basic construction of directing a key as it moves through a series of stages.  The user employs a variety of tiles to direct the key in the direction they wish. It’s a solid system that is neither overly difficult, nor completely easy.  A nice balance is found, although the puzzles are perhaps a little bit tiresome by the end. The rest of the game is spent navigating various interactions with characters.  Again, I don’t want to going into too much detail. Suffice to say, this overarching system is an aspect of what makes Pony Island a fairly fresh and unique experience.

A big contributor to the game’s overall feel is the music and sound. Made up of 8 bit noises and similarly themed music (unfortunately, Ginuwine’s ‘Pony’ wasn’t featured), the sound design of Pony Island is excellent.  There is an excellent dichotomy between the ‘cheerful façade’ and the player’s realization of the game’s looming antagonist. A large part of this is the music choice.

Similarly, while graphically disgusting, the game does a fantastic job of fitting the theme.  Backgrounds suit the mood, animations are completely adequate, and character profiles illustrate everything they need to. 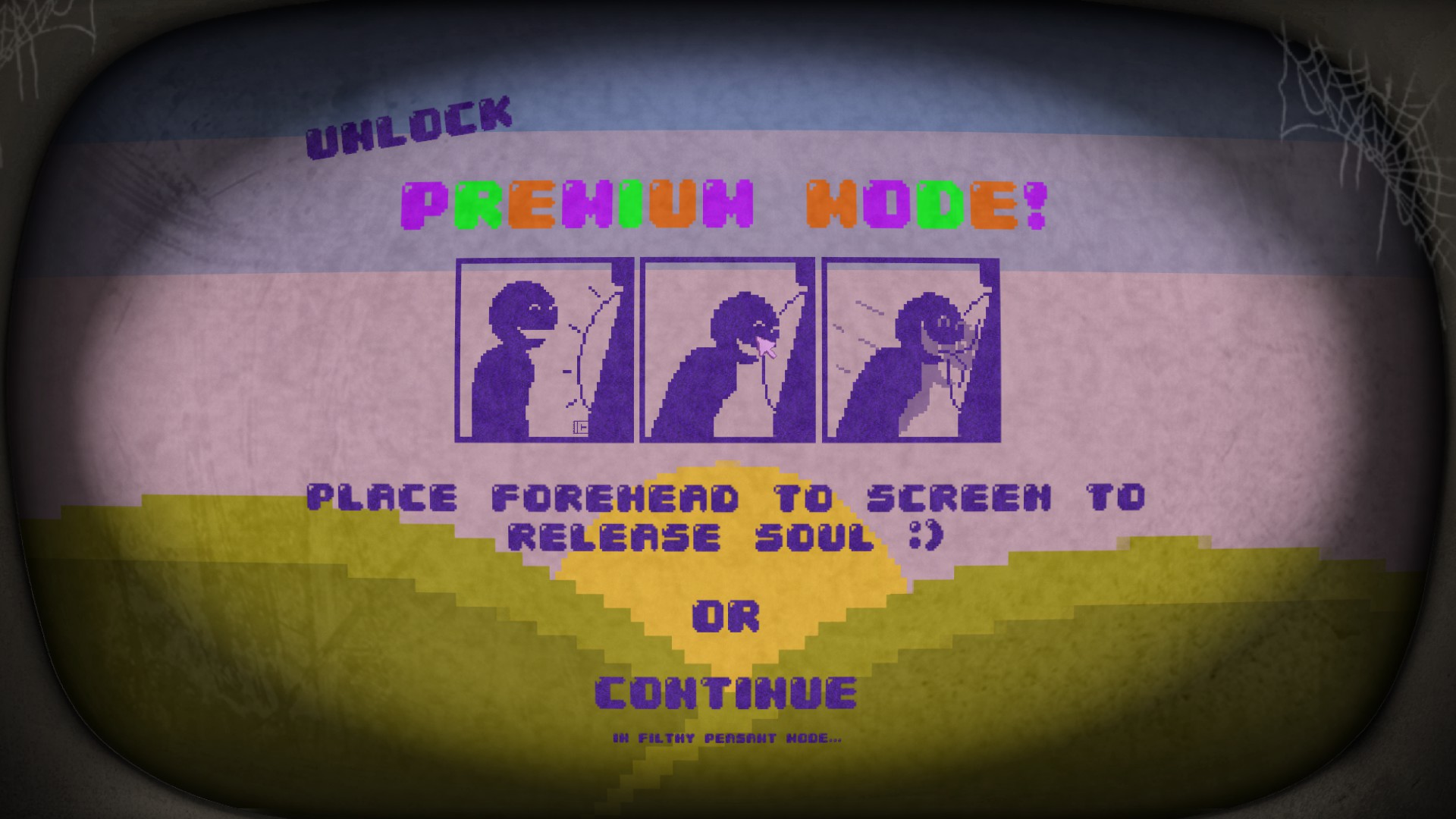 While Pony Island is a short game —we clocked in at around two hours for a playthrough— it is an achievement.  Very quickly, Pony Island’s subtle ominousness becomes a journey into utterly fun madness. We were constantly surprised by the direction taken and the varying mediums for that direction. Fantastically portrayed through the excellent use of a multitude of techniques, the tone and theme is incredibly fresh.  We played through its entirety with a wry smile and experienced outright laughter at certain points. Much of the humor is derived through its overarching and subtle commentary on different aspects of gaming culture.  This, along with its daring and unique direction, pervades every action; whether it be hacking the innards of the ‘game’, or blowing Jesus while in pony form (it’s not what it sounds like, I swear), it is a solidly good time. Don’t read anymore reviews; don’t watch any videos.  Just play this game. Any further coverage will only detract from your enjoyment.