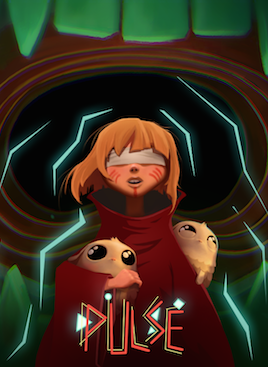 We’re still a million miles from it ever standing as a genre in its own right, but the idea of visuals literally materializing before you is starting to build some momentum. Games like The Unfinished Swan & Beyond Eyes as of recent — though certainly not major hitters — are trying to build foundation and alongside such console releases, the PC-exclusive Pulse follows in as much the same vein. Albeit treating its rediscovery of visuals with a far more bold and perhaps hostile demeanor. Developer Pixel Pi Games’ first-person platformer lands us in the role of Eva, a young girl who loses her sight at an early age, yet has learned to visualize the world around her through sound.

While this, obviously, has its benefits, the World has subsequently morphed into a sweet-and-sickly mesh of sharp colours with jagged edges and ambiguous stretches that give little away — the premise here being Eva’s World now stands on the brink of ruin. Thus it’s up to the player to explore — be it in a linear pre-determined trajectory — this mistranslated land to uncover just what exactly has unfolded to leave it in such a mysteriously empty yet unwelcoming state. As is so often the case with games like these, gameplay becomes heavily reliant on the user’s preempted assumption as to what exactly lies ahead. In this instance, deciphering sound to reveal the surroundings and figure out what’s safe and what’s not.

Simple foot-steps and jumps will help light the way — revealing the basic geometry of the land close-by, but even then it doesn’t always equate to simple passage. Be it stone platforms, reclining slopes, even the stark contrast of a burning campfire which couples as the game’s checkpoint system, Pulse can be deceivingly neat at the best of times; what may look, at first, like a clearing can often land you face-planting into a wall if you’re not paying close attention. This deceptive style of play has its moments and from the early phases I was interested to see how the aesthetic would evolve. Sadly, Pulse not only feels like an opportunity missed, but an opportunity, itself ironically, blindly dallying in the middle of nowhere looking for a way to go. And given this is a relatively short game in general, it only makes the woes look and feel even more apparent. 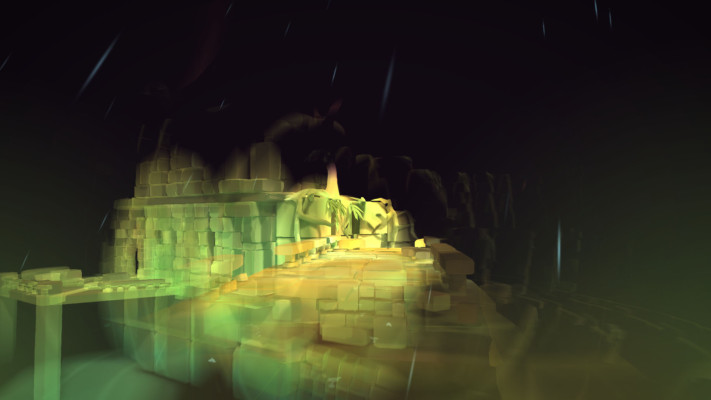 Where I expected the reaction of sound and visuals to create some more intriguing and perhaps provoking displays, instead you’re left to have your eyes strained by the same flash of erratic color that, at worst, is frustratingly off-putting. So often was the case I had to turn away from my screen due to the sheer volume and over-excessive nature; focusing too hard on the visuals can create a very uncomfortable experience. But even battling through the eye-strain will seldom reward you with much interesting or varying shifts in locale. Sure, there are your ruins and your glacier and your mountainous regions, but swap the colors over and you’ll barely tell the difference. There’s no significance or identity to these locations to make them worthwhile — each one as forgettable as the one preceding it.

The story is just as bare and non-existent  — momentary pauses in your journey coming in the form of either a crow-like figure reading would-be cryptic messages, or cutscenes that show little forewarning and act as mere locale transitions. The conversation moments especially are so untreated in their delivery and supposed mystery, it does little to the narrative to feel in anyway impacting. Some lines are delivered better coupled with in-game context, but most feel like unnecessary breaks in gameplay. Admittedly the idea that movement is critical to progress — and thus outright fundamental into seeing the World around you — does stretch exploration out reasonably well and navigating off the typical path will reward you with puzzle-solving and getting past a seemingly impossible obstruction. Pixel Pi’s first-person perspective does garner a greater immersion. 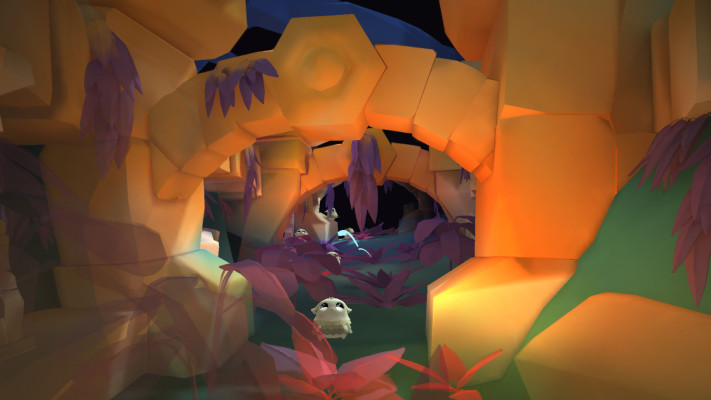 Yet for all the set-pieces Pixel Pi try flinging forward, player engagement is wasted on ideas that rarely tend to stick. Be it confusing stealth segments, walking on thin ice wherein an ill-fated game over screen can lead to some buggy checkpoint restarts, or downright awkward platforming segments requiring millimeter accuracy, Pulse — when it tries so hard to shake things up — just ends up crossing its own wires.

Even an in-game race of curious and affirmably cute creatures do little in the long-run. At first it can be quite adorable-come-satisfying to pick one of these small bundles of joy/distraught/frustration (depending on their facial expressions) up and merely chuck them about, but the playfulness quickly overstays its welcome fairly early on. What’s more, aside from helping you with some gerbil wheel-style puzzles, their presence is no more sentimental than the very world fluctuating in and out of view and their somewhat cute demeanor can deteriorate into a nuisance very easily, very quickly. 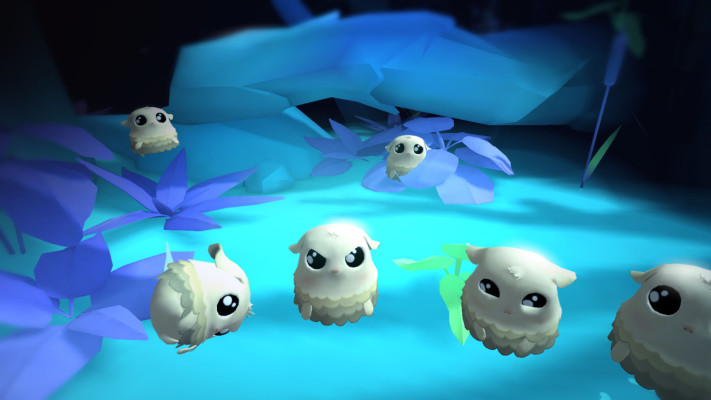 For all the promise Pixel Pi shows amid the early phases, Pulse sadly delves little further into evolving from out its basic foundation — new ideas introduced later on feeling out of place and poorly executed, it’s hard to see them as anything other than square pegs forcibly shunt into round holes. Players may find joy in experimenting with the echoing and reverberating properties to sound and discovering how this manifests in a visual perspective, but for the most part, Pulse comes off simply unfinished; hidden behind a veil of narrative ‘depth’ (that’s never really there) and bound together moreso by convoluted set-pieces that feel out-of-place and by-the-numbers. A faithfully promising concept with an ultimately (at the very least) questionable execution.