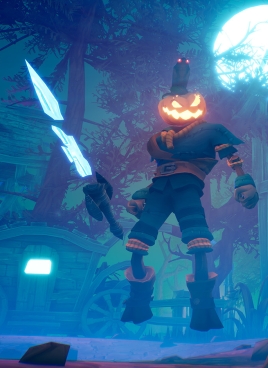 The PlayStation 2 era saw a metric ton of mascot 3D platformers to varying degrees of success. Games like Sly Cooper, Jak and Daxter, and Ratchet and Clank defined the era, while the succeeding generation saw a lot of new R&C games, but little else outside of remasters from that timeframe. You also had a lot of AA-level games that were willing to take chances that others weren’t, with bolder design and more striking visuals. Pumpkin Jack aims to offer up a higher-end gaming experience at the indie level and features a healthy mix of unique visuals alongside long and short-range combat and a unique approach to puzzle-platforming to keep things fresh.

Poor Jack is a dead wandering soul brought back to life in the body of a rotting pumpkin, and as if that wasn’t bad enough, he’s given companions to both help him and bug him so much that he’ll wish he was re-killed. The periodical giver of advice whether you want it or not is a snooty owl, while a trusty crow offers tips and allows you to send him hurdling at foes to take them out from afar. For short-range attacks, you have a wide variety of weapons to use as time goes on. Early on, you use your crow to deal damage before getting a trusty shovel, then a scythe and a slick ghostly blade that slices up all who dare go near it.

Jack’s role as the protagonist is to take out all the do-gooders in the world — a bit like how Cuphead puts you in the role of someone you maybe shouldn’t root for in theory, but can’t help but doing so. Pumpkin Jack has a lot of hack and slash action, slower-paced balance beam sections, extensive platforming areas and unique character-shifting puzzles amid things like fast-paced minecart sections and massive boss battles. There’s never a dull moment in the game because you’re always given something either new to enjoy or an existing skill to expand upon. For a game developed by a single person, there’s a shocking amount of variety on display here — and much of what Pumpkin Jack tries to do is done well with some of it working far better than expected going in. 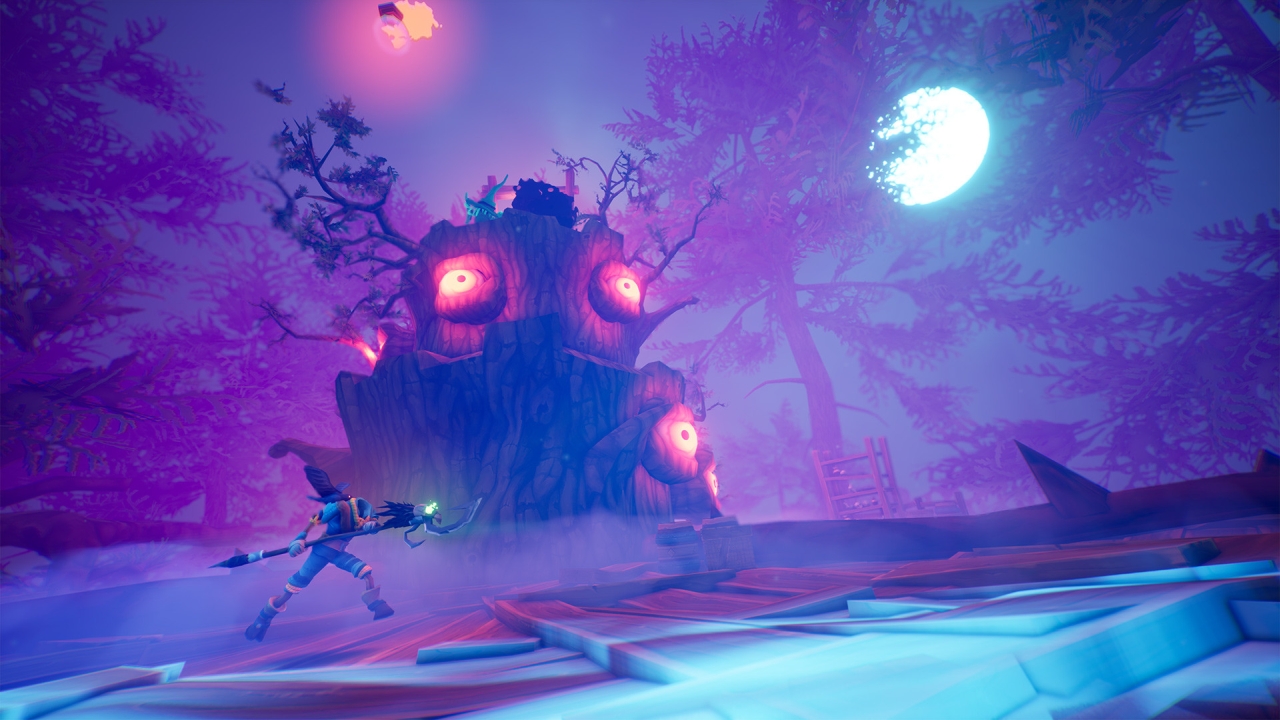 The minecart sections in particular are the best incarnations of that kind of stage since the heyday of Donkey Kong Country. Most games that have used them since that point, including DKC Returns and even Yooka-Laylee, have made them more of an homage to the past instead of a breakneck thrill ride that keeps you hooked from beginning to end. Here, you have a lot of on-screen cues to help guide you through without making things obtrusive. Small arrows let you know which way to turn the cart while things like bright red burned-off parts of the track let you know that it’s time to jump. No matter which course you’re on, you always have those markers to guide you and it makes things so much easier to time and figure out without the sections being frustrating. It would be nice to have some mid-section checkpoints for them, but that’s a minor quibble in the grand scheme of things.

The transformational puzzle sections are an interesting way to mix things up. Here, you use Jack in a head-only form as he has to move objects around and flip switches to move from Point A to B. The end goal is always to blow a whole bunch of stuff up with a bomb — so it’s a fun reward. There’s a slight bowling game mechanic to this where you need to make sure to properly aim the bomb in the right direction by jumping towards it and making sure to not send the bomb off the small platform sections with a jump or by falling off the edge yourself. There are some checkpoints here, mainly related to wherever you put the bomb — so they’re less-frustrating than the minecart sections if something goes awry. These sections are surprisingly enjoyable and wound up making this a more fun puzzle-platformer than many games that are outright puzzle-platformers because of how well they’re executed.

The core action is fun as you have snappy controls for movement, jumping and all manner of attacks. There are some sneaking sections that don’t work out perfectly due to the iffy-looking collision with the small planks of wood you’re on, but the camera doesn’t hurt you all that often and it can usually be moved around where you need it to. Pumpkin Jack is a fun game when it’s not getting in its own way — but its design is obtuse at times, with a troublesome camera, a lack of a map system and samey environments that can be easy to get lost in if you aren’t careful. There are some environmental ways to move forward with new enemies, but it can take a while to find them if you get thrown off-course. A simple mini-map or arrow system to help guide players would be a huge improvement down the line. 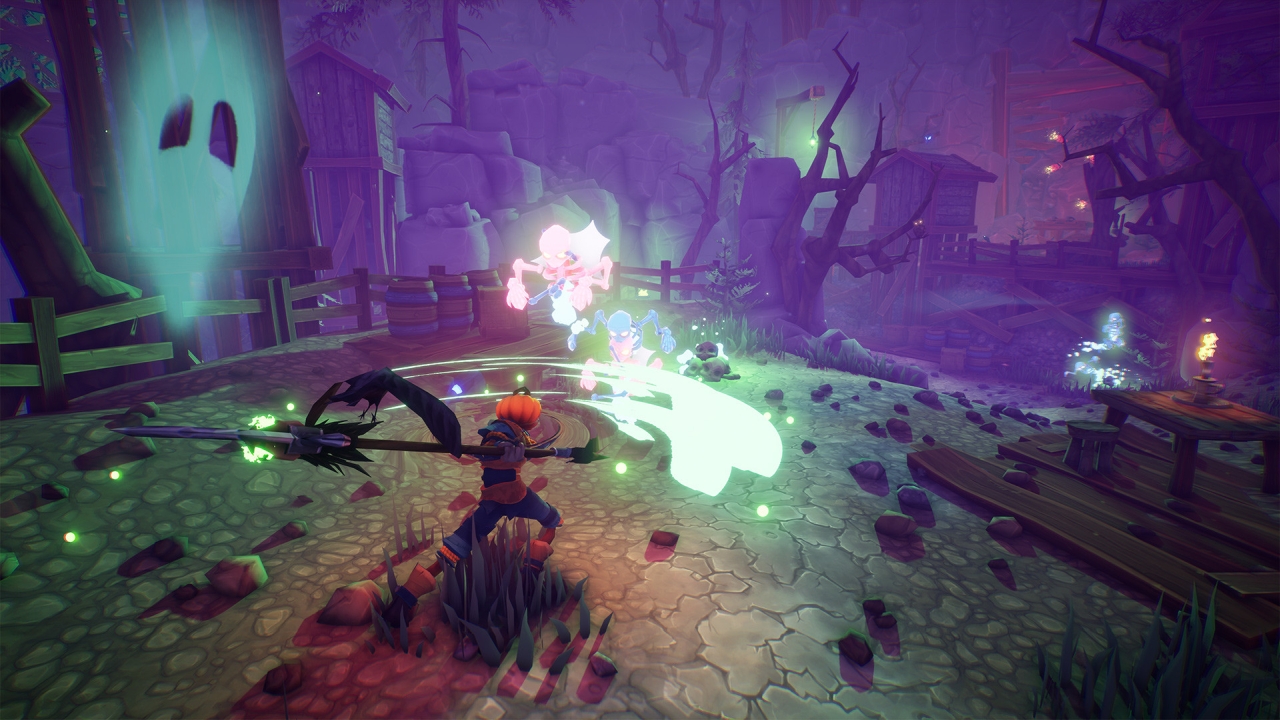 Fortunately, other than that, the game does work well and looks solid enough. For a game aiming for a Switch release alongside other consoles, the choice of going with a more cartoonish art style pays off. The characters and environments all have an impressive amount of detail and while this won’t be a system showcase for any platform, there’s never a point where it looks bad. The art style is consistent and it’s clear that a lot of work went into making each of the characters you encounter, whether friend or foe, stand out visually. The environments all stand out as well, with stark color schemes for different areas within stages — helping the long levels themselves at least look and feel different as they go on. Outside of framerate issues when you’re moving the camera around quickly, it’s consistently a good-looking experience.

The audio design is strong across the board. The music is perfectly fitting in a horror-themed game with a light tone. You’ve got nice theremin-esque music to enjoy right in time for Halloween and it’s all well-crafted. It’s a great style of music for this kind of adventure and it’s complimented by solid voice work as well. The between-stage narration is surprisingly good as well and plays everything perfectly. There’s no tongue-in-cheek presentation here — but it’s still light-hearted. It’s very much like A Nightmare Before Christmas in that regard where you can take everything going on seriously and still enjoy the lighter touch of how things are presented. 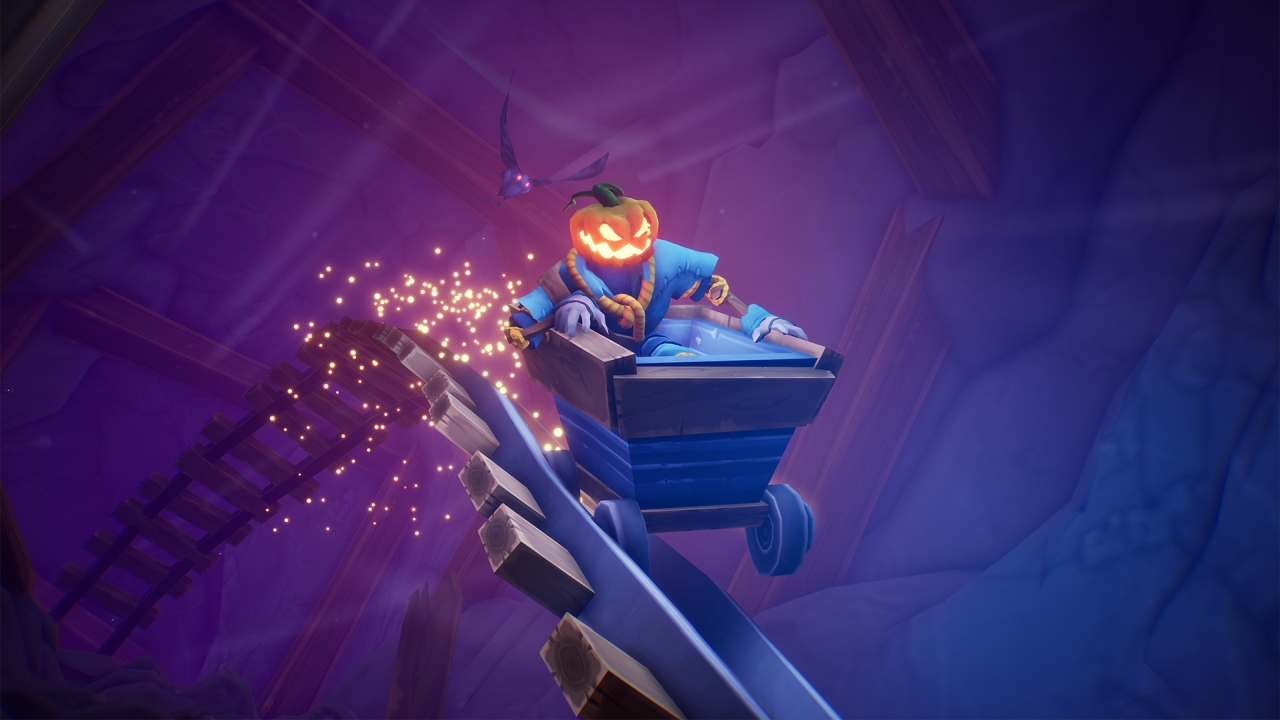 Pumpkin Jack has rough edges to it, but it still delivers a fun experience in spite of them. It’s very much a game that is greater than the sum of its parts. It has a wide array of gameplay styles to enjoy, with most well implemented. The action-platforming content is great, while the slower-paced tightrope-style sections are iffy due to some collision issues. Thankfully, the exploding puzzle sections help make up for this and the overall tone keeps things light-hearted and fun even with a dark, gothic look to the world and its inhabitants. It looks good and sounds even better and is a perfect pickup for anyone wanting a new 3D platformer who can accept less-than-perfect mechanics.