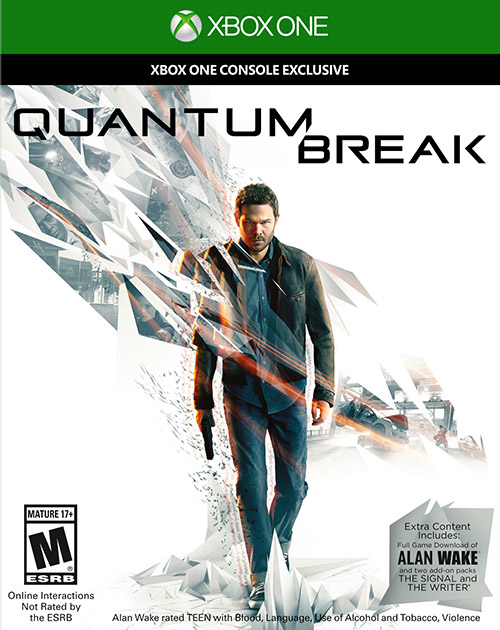 It has been a long time since we’ve last seen a Remedy game on the market, but every time we do, the Finnish company does something unique. Max Payne integrated bullet time, slowing everything in the world down as you could dodge bullets and precisely target your foes. Alan Wake was their latest memorable entry, creating arguably one of the best survival horror titles on the Xbox 360 that featured a rather compelling mystery. Now we come to Quantum Break, Remedy’s most recent attempt at something different by merging live action performances with gameplay. It’s not necessarily an original idea as FMV was popular in the early ‘90s, and even most of Remedy’s games have implemented this technique, but Creative Director Sam Lake and his team wanted to create something that mirrored a TV show. By casting actors and even producing a four-episode show based on the events of the game, which are somewhat able to manipulate certain outcomes, this is an immensely ambitious game. With all that on its shoulders, does Quantum Break make its way into video game history?

The story behind Quantum Break centers on Jack Joyce, played by Shawn Ashmore, best known for his portrayal as Iceman in the X-Men films. He meets with his best friend Paul Serene, played by Aidan Gillen who many may know as Littlefinger in Game of Thrones, at a University where they activate a time machine. Things only go downhill from there as Jack obtains powers that can manipulate time, giving him the advantage in battle. He’s not the only one, though, as an evil corporation has taken it upon themselves to train time soldiers for this certain instance. In short, it’s a time travel story that questions the idea of fate and whether we can change the future, which apparently is grim. The plot itself can be confusing at times, especially near the end where you’re not entirely sure what time period you’ve entered, but it’s primarily the unclear motivations of certain individuals spread through the campaign that will have you scratching your head. The ending is also concern as it feels inconclusive, opening up far more questions than it does answers. There are some strong moments spread throughout and there are well-orchestrated set pieces, but the overall plot falls a little short. 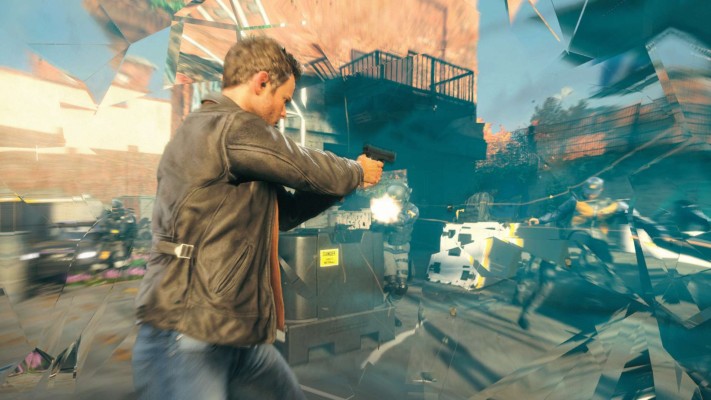 Mechanically speaking, Quantum Break instills various supernatural abilities to relatively typical third-person shooting. The core shooting mechanics aren’t particularly remarkable, but they’re fine in their own right. It’s adding the various time mechanics that makes things interesting. Remedy covers all their bases as Jack obtains abilities that will do damage, evade, protect and locate. Mixing them all together will make you feel like a superhero, being able to disposal of both regular attackers and more advanced soldiers with little effort. It’s actually funny activating Time Rush where Jack can run away from combat, and enemies will continue firing at his last known position, pushing forward without being any the wiser. It can lead to some entertaining moments, but the general set up to a lot of the fire fights is typical throughout the campaign. We do recommend to play this on Hard because Normal difficulty is far too easy, only accounting for exactly one death outside of the final boss and weird platforming instances. Speaking of platforming, there are a couple sections that will have Jack solving a puzzle or two while using his powers and jumping capabilities. There are few moments of this in the campaign and they feel underdeveloped, but there are a couple of instances where Jack’s powers will unlock story revelations from simply poking around in the environment.

One of the biggest issues with Quantum Break is simply the distribution of Jack’s powers. Progression is a key component in keeping things interesting, allowing players to gradually become more powerful over the course of a campaign. That’s unfortunately not the case with Jack Joyce. In the first act alone, our unlikely protagonist receives most of the key abilities, with one in the second and the final one at the beginning of the third. That means the final three acts will simply be about mastering these abilities, but even then, it’s not too difficult to understand how to use them effectively in combat. Those chapters will have you focusing on finding and collection all the distortions in time, which act as skill points to level up each ability. Even then, the skill tree for each time power is uninspired, being able to use certain skills longer, more times before needing to charge, or having a wider blast radius. There’s no real cool alterations to combat that makes things any different. How you played in act 2 will be fairly represented throughout the five act campaign. 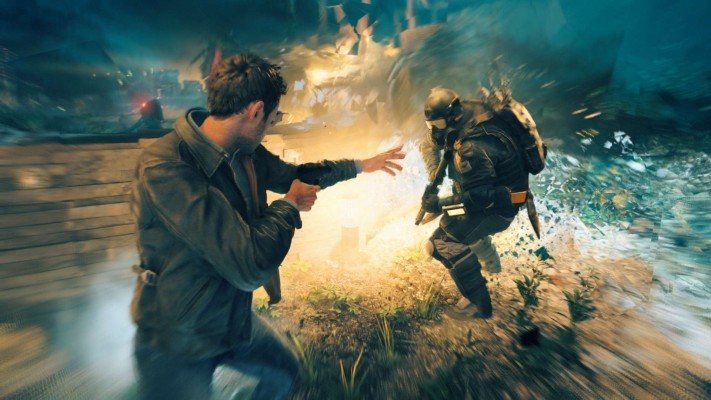 Remedy does fiddle with the idea of implementing equipment in the world that will disable Jack’s abilities, but this also feels underdeveloped and rarely used. When it is used, it will put you on edge as it creates a sense of uneasiness and worry as you’ll become so reliant on the overpowered abilities Jack has obtained. This should have been better explored, alongside some of the investigation mechanics that were sloppily introduced near the end. We mentioned how unsatisfying the ending to Quantum Break is, but this also has one of the most underwhelming final bosses we’ve ever faced. Not only are there no other traditional bosses in the game, but this fight amounts to killing two waves of standard enemies while dodging an attack from someone else. That’s it. It takes roughly four minutes, most of which is right at the end as there’s a single heavily armored enemy that needs taking care of. There’s no thought to it and it’s an absolute shame to finalize what was becoming an intriguing plot with a whimper.

One of the most intriguing aspects to Quantum Break is its attempt to integrate a mini-series in between the acts, alternating the different paths based on the choices you make. In theory, this is a fantastic idea and the production values are surprisingly solid. They don’t reach the heights of programming found on HBO or AMC, but they’re good enough. Oddly enough, Shawn Ashmore rarely shows up in the show, but whenever he’s on screen he does a fine job and even conveys the only genuine line of humor. The overarching plot may be about Jack, but the story itself is center on Liam Burke, Charlie Wincott and Fiona Miller, portrayed by Patrick Heusinger, Marshall Allman and Mimi Michaels, respectively. It’s well acted, with the standout cast members being Aidan Gillen and Lance Reddick, notably from The Wire and Fringe. Most of the events that transpire should have been more centered on these two individuals and less on the others. It’s primarily because of how they’re structured; Liam, Charlie and Fiona’s plots mainly only reflect a few moments near the end of the game, whereas the effects are shown more in Aidan and Lance’s characters throughout the course of the story, most notably at the end of each act. We also wish the choices made in the game weren’t so night and day because they’re simply laid out as two options at the end of each act, reflecting chaos and order. They also don’t change too much in the story, but it’s interesting to see the small alterations and even commentary spread in the environment. 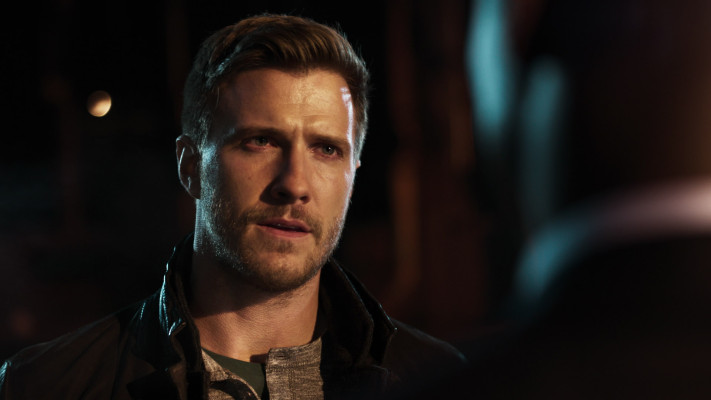 Quantum Break has an identity crisis going on for itself, not knowing if it wants to be a TV show, action game or puzzle platformer. There are elements of everything here, but they’re underdeveloped and improperly paced. For example, while the various powers Jack has been entrusted with make him feel like a superhero from the get-go, they’re all obtained in the first two acts, meaning the remainder of the campaign can feel repetitive. At the very least the story is compelling, and while the in-between show isn’t going to win any awards, it’s still better than expected. It’s also visually striking, especially with the various time warping effects going on around the environment, and it helps recognizable actors and actress signed on to fill the cast. Unfortunately, whether it’s the unremarkable shooting mechanics, questionable conclusion or the disappointing final boss, there’s a lot that weighs the experience down. Quantum Break is a great game at heart, but it comes with a lot of underutilized potential.